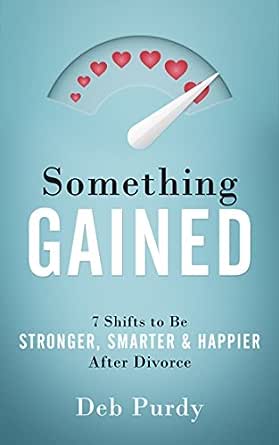 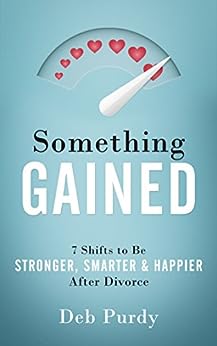 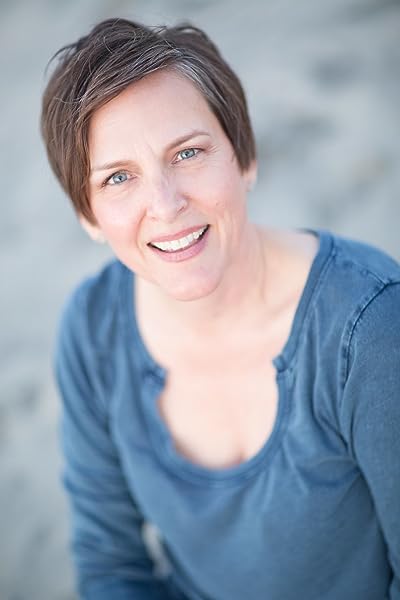 Something Gained: 7 Shifts to Be Stronger, Smarter & Happier After Divorce Kindle Edition

Deb Purdy is a transformation coach, speaker, workshop leader, author of Something Gained: 7 Shifts to Be Stronger, Smarter & Happier After Divorce and creator of My Divorce Recovery Kit, a five-part e-course available for instant download. Deb brings a balance of inspiration, creativity and practicality to her work. Lovingly empathetic and accepting, her trademark is her energy and passion combined with her extraordinary ability to help others see old challenges in new ways, identify and act on opportunities and transform their lives. Deb successfully transitioned out of her 10-year marriage and in the process created a very collaborative and friendly relationship with her ex-husband, who she considers her co-parenting partner. Deb holds a Master’s degree in Spiritual Psychology from the University of Santa Monica. Deb’s Intention Statement: I intend to offer my support to those who want to create lives they love full of joy, enthusiasm and prosperity. By doing so, I increase my own joy and prosperity and help increase the sum total of joy, prosperity and kindness in the world. To learn more visit www.DebPurdy.com --This text refers to the paperback edition.

4.7 out of 5 stars
4.7 out of 5
78 customer ratings
How does Amazon calculate star ratings?
Amazon calculates a product’s star ratings based on a machine learned model instead of a raw data average. The model takes into account factors including the age of a rating, whether the ratings are from verified purchasers, and factors that establish reviewer trustworthiness.

Lee Giacalone
5.0 out of 5 stars Something You Must Have For Your New Beginning!
Reviewed in the United States on September 18, 2017
Verified Purchase
This book is short, concise and to the point. It is a MUST read for everyone who has been divorced, is going through a divorce and contemplating a divorce. Having this book is the same as having someone in your corner telling you, "You can do it!" during a time when you need the most support. Who can understand all the hurt, anger and resentment you feel better than someone who's been there and done that? Deb Purdy can relate to all those feelings you have for having taken this life changing action called divorce. She also knows how to effectively move forward so you can live an empowering, fulfilling and joyful life.

Something Gained is Deb's desire to share her experience for your benefit. Consider this book as the first step you take in creating your own support network.
Read more
17 people found this helpful
Helpful
Comment Report abuse

NotVito
5.0 out of 5 stars Learning To Shift
Reviewed in the United States on March 26, 2017
Verified Purchase
Okay, let’s get this out of the way: I’m almost ashamed to admit it, but I’ve never been married. So why read a book on dealing with divorce?

I bought this for a relative who’s going through a hard and contested battle, and figured this might help. Before I delivered it I thought, maybe I’ll just take a peek inside…

Deb Purdy writes with a clear and plain-spoken voice, yet her words are imbued with a certain grace. She’s not preachy —as a lot of self-help authors can be— but comes across as hopeful, caring and extremely positive. She uses anecdotes of clients, friends and acquaintances to illustrate the thesis of each chapter, details how a situation can be “shifted”, and then includes exercises intended to help the reader through the shift.

The idea of a “shift”, as opposed to “change”, is the grand and eloquent idea here. Ms Purdy recognizes early in the book that the idea of divorce as a point of failure is the primary challenge, and how, rather than represent mere change (with the attendant anger and resentment and self-blame) a divorce can be a voyage to self-enlightenment. Ms Purdy also recognizes the difficulty involved in shifting a point of view, and includes methods for gradual achievement.

So, having never been married, why read about divorce? This book served me as a guide to recognizing what I’ve gone through in co-parenting my now fully-grown and handsome, well adjusted son —what I’ve done well and done not-so-well. I also realized that it can serve as a guide through difficulties I’m facing with that son leaving the cozily-lined nest we built, as well as recent career issues I’ve faced and how I can still learn to be the hero of my own story. Deb Purdy’s book is by no means a panacea, but is a thoughtful, helpful and ultimately reassuring ode to learning to live a positive life.
Read more

Mary Castillo, best selling mystery author
5.0 out of 5 stars A guide for moving beyond the pain to freedom
Reviewed in the United States on October 19, 2017
Verified Purchase
Something Gained by Deb Purdy is more than a "get over it" guide to divorce, it is a compassionate and wise book with specific steps that empower you no matter what kind of break up you're going through. In her kind but straight-forward style, Deb helps you to see beyond the suffocating pain, anger, and frustration to truly break the bonds that hold you back from becoming a stronger, happier you. I've gone back to this book several times only to discover a new, fresh insight that I can bring to my daily life. Appropriate for book clubs and support groups, readers who are going through breakups of any kind: family and friend breakups, or getting fired or laid off.
Read more
9 people found this helpful
Helpful
Comment Report abuse

Faith
5.0 out of 5 stars Very Relevant, Relatable & Inspirational
Reviewed in the United States on October 18, 2019
Verified Purchase
I loved how relevant this book was to modern relationships and co-parenting. I don't have children but I read the chapter about kids anyway and it was so helpful and enjoyable to read. I believe what's personal is universal and while our circumstances weren't the same, the author really related her story to her reader, regardless of background. She shared her personal experience and gave tangible advice that you can actually do to work towards your goal. Meditations, affirmations, worksheets, guides, etc. Things that you can actually see and do to scale your progress and keep your focus on healing. There's so many nuggets of wisdom in here, sentences on every page must be underlined! If you've been feeling stuck on your last relationship and aren't sure how to move forward, this book can definitely help you if you show up for yourself and do the work. You deserve to heal and have a wonderful life! Loved this book so much.
Read more
3 people found this helpful
Helpful
Comment Report abuse

Brookley
5.0 out of 5 stars Really great book!
Reviewed in the United States on January 11, 2019
Verified Purchase
I have been contemplating a divorce from my husband, but we're still working toward reconciliation. This book has been a very positive and helpful guide, even for someone who is not divorced yet. I think I will end up reading it (listening to the audiobook, actually) several times!
Read more
5 people found this helpful
Helpful
Comment Report abuse

Jason Lockhart
5.0 out of 5 stars This will make the situation a lot easier.
Reviewed in the United States on November 13, 2017
Verified Purchase
I went through a divorce ahead of reading this book, but even now after healing from it, I learned a lot about moving forward and being a better person, father, and friend to my x. I wish I had this book prior to the divorce which would have made things a lot easier. Anyone going through a similar situation or even if you have already been through it and just need a little pick me up, give this book a read, I highly recommend it.
Read more
7 people found this helpful
Helpful
Comment Report abuse

Amanda B
5.0 out of 5 stars Inspirational must have, freshly divorced single mom, read it!!
Reviewed in the United States on June 15, 2019
Verified Purchase
As I frantically searched for self help books going through a fresh divorce (now 4 months ago) I came across this book. Up to my 2nd time reading it, highlighted all over, pages bookmarked and absolutely inspired me that there IS something (tons) gained from divorce! Promise you this book is real, to the point and its guidance is amazing. Grateful I own it. Plan to read it over and over.
Read more
2 people found this helpful
Helpful
Comment Report abuse

J. Keith
5.0 out of 5 stars Great Read!
Reviewed in the United States on May 28, 2018
Verified Purchase
This was a great read, very practical. I really love the author ‘Deb’s’ personality. She is down to earth and seems like a real person coaching you vs a clinical or medical person. I highly recommend this book to any person going through a separation or divorce!
Read more
4 people found this helpful
Helpful
Comment Report abuse
See all reviews from the United States

Venessa Boucher
5.0 out of 5 stars Worth every penny
Reviewed in Canada on June 2, 2019
Verified Purchase
Got me through my divorce ... there were quite a few lightbulb moments for me in this book...!
Read more
Helpful
Sending feedback...
Thank you for your feedback.
Sorry, we failed to record your vote. Please try again
Report abuse

Northern Customer
5.0 out of 5 stars Good transaction
Reviewed in Canada on October 15, 2019
Verified Purchase
A gift requested by my sister
Read more
Helpful
Sending feedback...
Thank you for your feedback.
Sorry, we failed to record your vote. Please try again
Report abuse