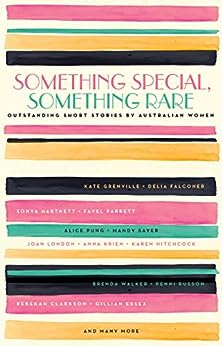 A sleepy town is gripped by delusory grief after the movie being filmed there wraps and leaves. A lingering heartbreak is replayed on Facebook. An ordinary family walks a shaky line between hopelessness and redemption.

Brilliant, shocking and profound, these tales will leave you reeling in ways that only a great short story can.

‘This collection is a fantastic line-up of some of Australia’s best writers who simply happen to be women … the themes explored are as wide-ranging and eclectic as the writers.’ —Sunday Age

‘All the stories here justify that use of “out-standing” in the collection’s subtitle. If pushed to choose one standout, for me it is Favel Parrett’s ‘Lebanon’, which in its three pages manages to convey more emotion than some stories do in 300 … This beautiful meditation on loss and belonging evokes the Australian tyranny of distance and is a fine example what the short-story form can achieve.’ —The Australian

‘Perfect fodder for a Sunday arvo on the couch, these charming, funny, touching short stories from well-known Australian female writers are what winter was made for.’ —Cosmopolitan

‘A wonderful selection … the strength of the collection is that it doesn’t define the Australian woman writer as a particular situation and includes writers from various social and cultural backgrounds.’ —Artshub
Read more
Previous page
Next page

Martina A. Nicolls
VINE VOICE
4.0 out of 5 stars Diverse and distinguished authors
Reviewed in the United States on September 3, 2015
Something Special, Something Rare: Outstanding Short Stories by Australian Women is a compilation of 20 short stories. The themes of the stories are wide and diverse, incorporating bushfires, rural life, dogs, childhood, school, adolescent sex, nostalgia, friendships, men, father-son relationships, mother-daughter relationships, families, brothers, pregnancy, children, the meaning of life, lies, loss, sadness, and death, but rarely about career and work.

Many are personal, including stream of consciousness, while some are stories told in the third person. The third person is not only a woman’s voice, but there are a few short stories written using a man’s personae.

I liked ‘One of the Girls’ by Gillian Essex, first published in 2010. It is a mother and teenage daughter relationship from the mother’s perspective in stream of consciousness: one long sentence. Essex’s stream of consciousness is easier to read and more understandable than James Joyce’s 1922 novel, Ulysses.

I also liked ‘The New Dark Age’ by Joan London, first published in 2002. George is a recovering cancer survivor who returns to work in his own music store, called George’s. The long short story, written in the third person, is a tender piece. ‘He’d put on Kancheli’s Abii Me Viderem. He’d been longing for it all evening. He was listening these days to composers from small, almost unforgotten countries on the outskirts of the old Soviet Union. Countries which had known great suffering. Kancheli was Georgian. There was something pure and unsparing about this music, like walking over a strange harsh landscape. I turned away so as not to see, that was what Abii Me Viderem meant.’

The writers come from varied backgrounds including indigenous Australian, Asian, Chilean, and European, and from all ages, with the common element being that they are all are award winning authors.
Read more
One person found this helpful
Helpful
Report abuse
See all reviews

missastanley
4.0 out of 5 stars Pleasant
Reviewed in Australia on June 5, 2015
Verified Purchase
This is a pleasant collection of short stories from Australian female writers. In my opinion there are no clear standouts, although a relatively enjoyable read nonetheless.
Read more
Report abuse
See all reviews
Back to top
Get to Know Us
Make Money with Us
Amazon Payment Products
Let Us Help You
EnglishChoose a language for shopping. United StatesChoose a country/region for shopping.
© 1996-2021, Amazon.com, Inc. or its affiliates