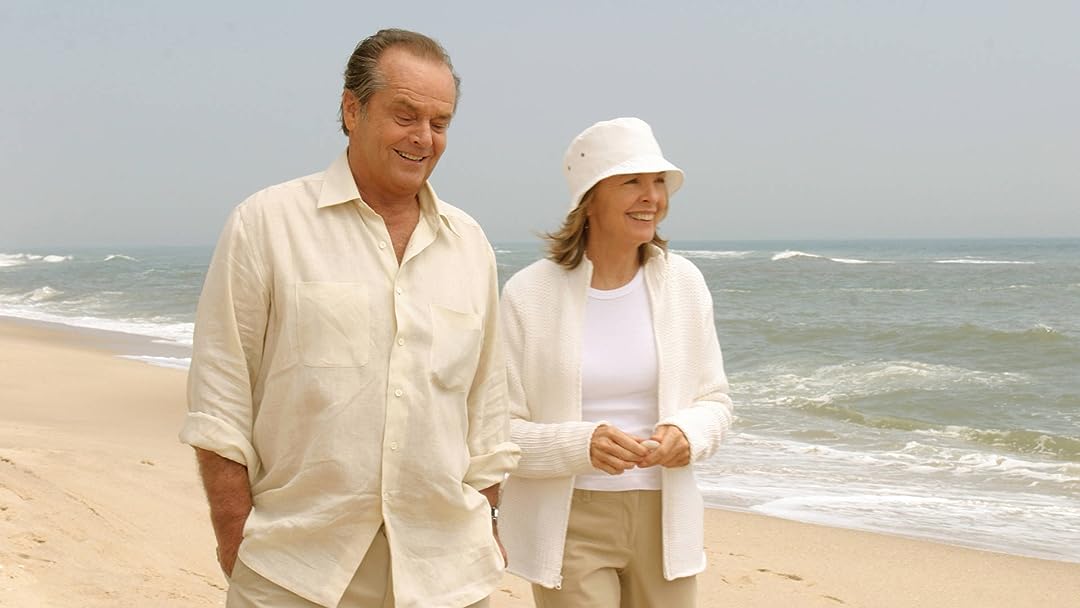 (3,840)6.72 h 8 min2003X-RayPG-13
A perennial playboy who has never dated a woman over thirty finds that love is as serious as a heart attack when he falls for his girlfriend's mother. Too bad she's now dating his young doctor! There's only one way they can all get what they want: Something's Gotta Give.

Elle Shopper LadyReviewed in the United States on August 17, 2020
5.0 out of 5 stars
I bought the DVD - here's why
Verified purchase
The picture is about people my age doing life and learning to do some of it right for the first time in many ways.
The world needs lots of healthy, delightful, busy, and happy-ending stories with older people in the lead roles. Older people today are another minority but growing and they need help with NOT feeling like an anomaly in work and love and sex and optimizing a quality life later in life.

I liked the style in every way - it's personal - the lifestyle and places and things all aim to charm and do. The people are world-class favorites, on all sides of the camera. And a baby......yes, that works! Thank you all -

I wish you'd do more but they must also share happy endings, even up until the last days of a good life.

Sharing good things that people really need - and the laughter - the good kind - nothing cruel.

Thank you again for a fine movie. I enjoy it over and over through the years and never tire of it.

Mom2SFsReviewed in the United States on August 27, 2021
2.0 out of 5 stars
You need ultimate imagination to believe this story
Verified purchase
I could believe Jack Nicholson falling in love with Diane Keaton, but not in the way it was portrayed in the story. When Diane knows he has been a playboy and non-committal all his life. I could believe Diane found new joy in sex after not having it for a long time, but I could not believe she enjoyed it more with Jack (who just had a heart attack and could not even climb a flight of stairs) then the much younger Keanu. Spoiler: this was especially true when Jack disappeared for six months and Diane built another relationship with Keanu. She had said earlier she did not know sex could be enjoyable as such in the first marriage. It was especially unconvincing when the sex scene between Jack and Diane was awkward, distasteful and did not convey whatsoever that was the reason Diane fell for him (but she seemed to convey that with her erratic behavior later. ) I could believe Diane's daughter dating Jack if she is a budding singer who was looking into getting something out from a music producer who was 30+ years older than her, but I could not believe it when she is an accomplished auctioneer herself. When after all these questionable issues surfaced, I stopped watching the movie when Jack showed up in Paris, took Keanu's seat before he arrived with the ring, and Diane, of all things, asked Jack to stay and spoiled the planned romantic dinner with Keanu. Sorry, Diane - even with your marvelous acting. All I can see was a woman who had no rhyme nor reason falling for a man who may die anytime, when sitting next to her was a man who was a gentleman (portrayed in the movie) on all accounts. I could predict that she would shun Keanu and went with Jack, which seems to be what most audience want to see. May be if they had cast another person to be Jack (more likable) and another person to be Keanu (less handsome and gentlemanly)...just maybe...No recommending unless you have nothing else better to do.
5 people found this helpful

VictoriaReviewed in the United States on August 12, 2020
5.0 out of 5 stars
A Gotcha movie for fun & romance.
Verified purchase
Looking for a romantic, fun movie. Heard about 'Something's Gotta Give' awhile back. Checked it out and at first it seemed slow and really this old guy (J Nicholson) and really young lady? And I started with 4 stars in my head until the end of the movie. Nope, I didn't change stars because of the ending. I changed it because how the story got to the ending. It made sense, healthy, understandable and yes romantic. Yes, this is an '2000 movie & I loved the cast and so great to see K.Reeves, in a full character. He is cute and sexy in this. Also loved seeing movies with actors in their 50's and above playing real people, in love, like, dating, shy, insecure and sexy. Great movie to watch on a rainy day, with or without a date!
2 people found this helpful

Christina ReynoldsReviewed in the United States on October 30, 2020
4.0 out of 5 stars
A healthy dose of hilarity and sincerity
Verified purchase
Something's Gotta Give is a 2003 American romantic comedy film written, produced and directed by Nancy Meyers. It stars Jack Nicholson and Diane Keaton as a successful 60-something and 50-something, who find love for each other in later life, despite being complete opposites. Keanu Reeves and Amanda Peet co-star, with Frances McDormand, Paul Michael Glaser, Jon Favreau, and KaDee Strickland playing key supporting roles.

There's nothing particularly surprising about this film due to its own description; because of this, the way in which the characters are introduced to one another ultimately does not matter since the audience knows about the inevitable conclusion. Despite that, this movie opens and makes a strong point of highlighting the differences each character has from one another and ultimately creates a giant gap of metaphorical space that must eventually be removed. This seems nearly impossible at first and comes to fruition over the course of scenes where the pace varies meticulously and in an unpredictable manner. As a result, viewers can be assured that the experience of watching ‘Something’s Gotta Give’ is refreshing as opposed to monotonous and alluring as opposed to boring.

I sincerely would like to know whose idea it was to cast both Nicholson in Reeves as potential intimate partners in this film; their natural dispositions make them inevitable foils to one another and this is ultimately an expected and perhaps even inescapable source of conflict. Reeves is bright eyed and simmering with ambition whereas Nicholson Is intimidating and rather cynical at his core. This conflict never overtly manifests or shows itself as jealousy, but this unconsciously prepares the viewer to extensively examine the relationship they have with Erica over the course of the entire story.

It would be fair to compare the story to the one portrayed in ‘The Notebook’, but the raw authenticity of the characters separates this one from what is often shown as the ‘picture perfect’ - most often too perfect- example of a relationship. Harry is distinguishably neglectful when considering how his thoughts and/or behaviors might affect other people, and he isn't the best “reading the room”. Marin is so beautiful in that her obvious creativity as a writer makes her exceptionally sensitive and also sometimes makes her all the more insecure. At the end of the day this isn’t a film that encourages us to love blindly but is in fact the opposite: this movie encourages us to love with our eyes completely wide open to any opportunities and blemishes that can potentially make themselves known to us.

A particular amount of charm is maintained by the various ways in which the tone changes over the course of this film. The humor is at times self-deprecating and encompases the awkward way in which our two lovebirds eventually find ways to relate to another; They laugh at one another while simultaneously acknowledging their own shortcomings. Scenes that some might describe as sleazy still manage to have a particular amount of class that somehow always makes itself known.

Don't get the wrong impression here - the plot is ultimately rather unoriginal and may make some people bored out of their skulls.
It's nothing to write home about, but it's a healthy dose of hilarity and sincerity: Can we really ask for more?
I would recommend
2 people found this helpful

Avid readerReviewed in the United States on December 1, 2020
4.0 out of 5 stars
"I have always told you some version of the truth."
Verified purchase
Words spoken by Harry. Harry was a man who always went for younger women, but when he met Erica, things changed. I actually started this movie more than a decade ago, and only now finished it. I was called for jury duty, and as the day dragged on, they popped in this movie in the VHS player (yes, long ago they sold tapes), and I do remember the Viagra scene at the ER, but then they called the jury panel. So much fun to finally get to savor the entire movie. There is a lot of sweetness and some bitter sweet moments also. As a romantic comedy, it really hit all cylinders in that it seemed both of them really enjoyed the roles they played. And there were little details, as when they both had to reach for their glasses to be able to see what time it was. And the movie has a lot of style. I also feel the movie could actually happen.
One person found this helpful

Read demonReviewed in the United States on November 29, 2015
5.0 out of 5 stars
and it did give and give and give
Verified purchase
How could you not love a movie with these two in it!? It gave us all of it. Great cast, great locations, and great performances. Funny as heck and I still can't get over Diane Keaton of the "turtle neck" woman steppin up and letting go. The nude scene was hysterical. Good for her! She's beautiful and I want to be her when I grow up. ( I just turned 60...but hey 60's the new 30 so I still have time.) I hope she does more if this kind of work. She was great with Morgan Freeman in The Apartment too. <3
17 people found this helpful

PSUMom2272Reviewed in the United States on April 1, 2018
5.0 out of 5 stars
Nicholson and Keaton at their best!
Verified purchase
Forgot it was just a movie. It was like watching a love story unfold. Well done movie that will make you laugh, surprise you and leave you wanting more. Hats off to the director... Every detail was well captured. Though we all know you don't give CPR to someone who can talk, it was funny. This film had me rooting for them. Too. many favorite scenes to pick from. I have watched this movie many times...it never gets old.
8 people found this helpful

Richard WhitlockReviewed in the United States on May 5, 2017
5.0 out of 5 stars
Jack Nicholson, Diane Keaton, romantic comedy
Verified purchase
One of the best romantic comedies since Pretty Woman. Nicholson & Keaton, as well as rest of cast were excellent in their roles. Beautiful oceanfront house setting (original cost $41 million to build). Nicholson & Keaton displayed rare & excellent "chemistry" in their roles.
Possibly the best production for each of them. The story, characters and setting would be realistic for today's audience. I've seen most of their movies and this is top tier.
11 people found this helpful
See all reviews
Back to top
Get to Know Us
Make Money with Us
Amazon Payment Products
Let Us Help You
EnglishChoose a language for shopping. United StatesChoose a country/region for shopping.
© 1996-2021, Amazon.com, Inc. or its affiliates