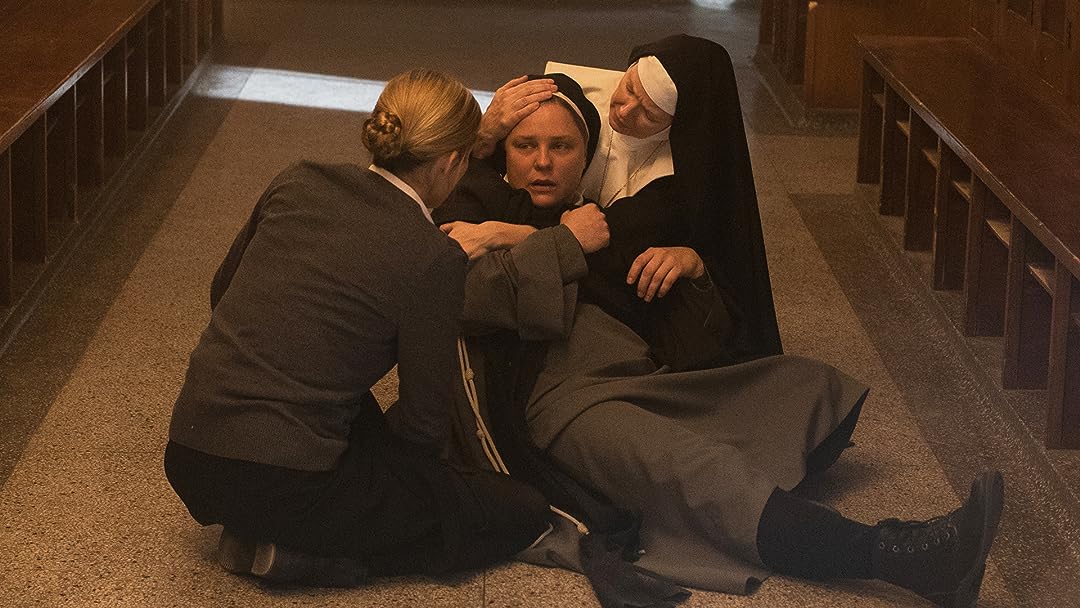 (35)
4.71 h 30 min201716+
After a mysterious death at the Abbey, Sister Talia finds herself caught in the center of the internal investigation. With strict orders from the newly elected Mother Superior, she must uncover the truth behind the death and ensure the Abbey remains undisturbed. All that she knows about the Abbey and her Sisters is about to come into question, as she discovers sometimes the good do kill.

Mochni (Hopi: Talking Bird)Reviewed in the United States on September 28, 2019
1.0 out of 5 stars
A Sister and a Priest Advised on this? I don't believe it.
Verified purchase
1. The only *nuns* in the Catholic Church live in monasteries, or abbeys if you will. They are walled in, and never leave those walls except for extraordinary circumstances. They would never be seen by others, except through a grate. They would never speak with one another privately, nor at meals (except on extraordinary feast days when the abbess or prioress declares the exception.)
2. Unfortunately, most Catholic Sisters think they are nuns when they aren't.
2. The building where this film was shot looks more like a protestant boarding school -- probably a failed one, given the autumnal gold leaves in the exteriors -- that was available after had times.
3. The morning wake-up comes before dawn, not when the sun has been up for hours. The wakeup exchange is "Benedicamus Domino" (Let us bless the Lord) and the *response* is "Deo Gratias" (Thanks be to God.) Even the half-baked writer of trivia didn't know to correct the Deus to Deo, but not the Benedicamus.
4. The votes would not (a) have been sorted out by a single *sister* at this convent, but by a minimum of three;
5. Nor would the votes have been counted atop the Holy Altar Table.
I could go on, but I haven't time, except to say that the script, storyline, and acting were stilted and cartoonish, nor in the least bit worthy of the government film grants with which it was produced. Both the Quebec and Canadian Parliaments should inquire into the grant processs.

KC_VTReviewed in the United States on September 10, 2018
4.0 out of 5 stars
Rather good! Worth your time.
Verified purchase
I am a huge fan of mysteries having grown up watching them with my mother. While I normally don't care for most of the modern ones I found this to be very well done.

A very good movie worth the time to watch! I will watch it again!

I noticed many people commenting that they found it badly acted, not so well done acting. I saw many comment on the religious aspects. As a Catholic, born and raised, I have to say they most likely have no clue about anything in the Catholic church. Nuns are not born nuns they are people who came to their faith through many avenues some very dark. This is because they are just humans! Look at the crisis of priests in the church to see what I mean.
5 people found this helpful

MarieReviewed in the United States on November 4, 2018
3.0 out of 5 stars
Suspenseful
Verified purchase
I enjoyed the suspense and mystery element, it held my interest. However, I didn't care for the lack of fear amongst the nuns, they seemed a bit too calm considering all the murders at the Abbey. And why keep it "hush hush?" The ending seemed a bit confusing, which was also a letdown.

CarmenReviewed in the United States on January 26, 2019
4.0 out of 5 stars
Not for the narrow-minded
Verified purchase
This was a fascinating movie to watch. Sure, it lacked a bit of the realism, which would necessitate calling the police after the first victim appeared, but since this is a story about a nun detective and not a police detective, completely understandable. I loved the premise that even in a community of nuns, bad and nutty characters appear. It was a good story and the acting is also good - and I am catholic . . . .
One person found this helpful

PeachyPatReviewed in the United States on May 16, 2018
1.0 out of 5 stars
Killer nun running amok. You should run from this movie
Verified purchase
In the beginning, I thought is was a novel idea to show that nuns, just like other people have their bad sides. In the end, it turns out that there are just too many nut cases gathered into one place. The plot is mundane, the acting is terrible and the on-going hiding of dead bodies is unbelievable.Where did they all go? Why was there a hunky guy working in the nunnery garage? Why did he always have his shirt off? Did even one of these women become a nun because she wanted to do some good? How many murders should be covered up just to make sure the place didn't get turned into condos? Who called the cops in the end and whose going to explain where our what has been happening. Last, but not least, where does our detective nun think she's going? There is not one redeeming thing about this movie.
13 people found this helpful

FlashynistaReviewed in the United States on November 26, 2018
3.0 out of 5 stars
could have been better
Verified purchase
This would've been better if they had developed Sis Talia more and let her go off when the time came. Other wise the story was still well written and great suspense.

AthenasRealmReviewed in the United States on June 8, 2018
3.0 out of 5 stars
Once upon a time at an Abbey...
Verified purchase
I enjoyed the Canadian Fall colors in this movie. It was actually filmed at an Abbey.
Whoever wrote this, however, knows nothing about a cloister.
Nice scenery but really bad writing.Could have been a lot better.

I do not usually put two-and-one-half star rated movies into my Amazon Prime movie watchlist. I am glad I did this time. The plot initially seems like it is going to be predictable, but then the plot veers off into interesting, unexpected paths, over and over again.

I am not Catholic. That comes to play in my review because I do not have any religious convictions about nuns that prevent me from totally enjoying this movie. I suspect that was the case in the one-star reviews of this movie.
6 people found this helpful
See all reviews
Back to top
Get to Know Us
Make Money with Us
Amazon Payment Products
Let Us Help You
EnglishChoose a language for shopping. United StatesChoose a country/region for shopping.
© 1996-2022, Amazon.com, Inc. or its affiliates