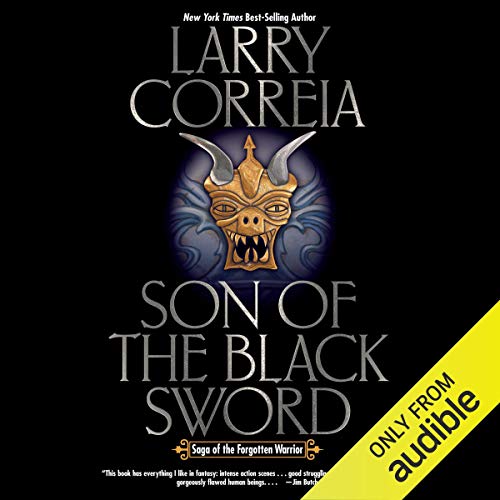 Son of the Black Sword: Saga of the Forgotten Warrior, Book 1

4.6 out of 5 stars
4.6 out of 5
954 global ratings
How are ratings calculated?
To calculate the overall star rating and percentage breakdown by star, we don’t use a simple average. Instead, our system considers things like how recent a review is and if the reviewer bought the item on Amazon. It also analyzes reviews to verify trustworthiness.
Top reviews

Lowell D. Jacobson
5.0 out of 5 stars A Compelling Start to a New Fantasy Series
Reviewed in the United States on October 23, 2015
Verified Purchase
I don't normally review books I've read on Amazon -- why gild the lily, and add to what others have already done far better than I could? But given the relatively few reviews for this so far, I figured that I'd chime in for a change.

I've enjoyed Larry Correia's other series (Grimnoir and MHI), which were entertaining and well-written (if nothing incredibly deep and a bit on the "pulpy" side but very enjoyably so), so I decided to give this a try. I'm quite glad that I did.

This is unequivically Larry Correia's best work yet. While the prose in his prior series can be workman-like at times (and the focus on some of the details of action sequences can detract slightly from the narrative), the quality of writing here is a clear improvement beyond the solid efforts of Larry's previous series. The characterization is also Larry's best work, with the protagonist significantly more nuanced and complex than in prior series (with the possible exception of Franks in MHI), while still being heroic and sympathetic and acting rationally, given his outlook, knowledge, and constraints. The plotting is extremely well-done and well-paced, and the periodic flashbacks (especially in the early going) were well-placed and of well-tailored length to slake the reader's thirst for backstory and worldbuilding without giving away the whole game or detracting from the overall narrative arc.

Overall, the world is close enough to ours to be recognizable and not so different that it and its characters are unrelatable. Their motivations are well-established, and even having read Larry's two other fantasy-ish series, the plot twists and events were not the least bit predictable, other than insofar as characters in novels should act in a manner true to who they are. Side characters are filled in as necessary, again, without giving away too much information or giving us full insight into their plans and motivations for those whose arcs are not resolved in this book. While there are hints as to some of their motivations, particularly for the more minor characters whose arcs are resolved -- the hints provided regarding the "string-pulling" big bad behind the scenes and the "dirty work" big bad implementing things, and the inferences that the reader can draw, are tantalizing, and make me wish that this whole series had already been completed.

Continuity is also well-established, as are the laws of unintended consequence -- in several instances, characters are appropriately forced to deal with the results of their earlier choices, both for good and for ill. All-in-all, its a very promising start to the series. Is it Brandon Sanderson's "The Stormlight Archive"? No, it's not -- more focused on action, narrower in scope, less concerned with the overall magic system and worldbuilding. But it's thoughtful, creative, interesting, coherent, consistent, well-paced and well-plotted -- a damn fine fantasy book.

My only complaint -- though it's a good problem to have -- is the wait before the next book in the series comes out. Nicely done, Larry -- and keep up the great work!
Read more
171 people found this helpful
Helpful
Report abuse

Michael Knopp
3.0 out of 5 stars Interesting idea, mediocre execution
Reviewed in the United States on June 28, 2019
Verified Purchase
Son of the Black Sword checks all boxes of a book I should like. I like Larry Correia’s Monster Hunter books. It has a beautiful map on the inside. It has an illustration by Larry Elmore on the inside. The world building is pretty impressive (seems loosely based on India’s caste system from the 1800s). There are cool monsters.

I think it has to do with two issues. Our protagonist is pretty bland. The first 150 pages really only focus on him. It starts in the present as Ashok fights some monsters. Then it jump back to fill in his backstory. It does this for about 150 pages. Then Ashok kind of disappears and we’re introduced to several more characters. None of these characters are given time to develop before the climax of the first book. There’s enough cool stuff happening that I’ll probably read the sequel but it won’t be near the top of my must read pile.
Read more
8 people found this helpful
Helpful
Report abuse

Bruce Parrello
5.0 out of 5 stars An incredible throwback to the days when books brought joy
Reviewed in the United States on April 9, 2019
Verified Purchase
The plot doesn't matter. This is a book about decency, duty, and loyalty. Every character is compelling and deep: you understand both who they are and why they are. Because it is about duty, loyalty, and decency, it is full of scenes that bring tears to your eyes, and the actions are bigger and brighter because they matter. I am so accustomed to the gray blandness of modern entertainment that I could not understand at first why I was unable to let go of this book. But I could not, and I finished it in less than 30 real-world hours. Buy it, read it, buy more and give them to your fiends. The world needs more books like this.
Read more
12 people found this helpful
Helpful
Report abuse

hoosiertoo
4.0 out of 5 stars Correia's best yet - IMO, of course...
Reviewed in the United States on October 28, 2015
Verified Purchase
I came to MHI and the Grimnoir Chronicles late; devoured them all and wanted more - especially the Grimnoir series. When I heard Correia had a new book coming out I was disappointed to find that it was neither series, but the concept looked intriguing, so I bit - and I'm glad I did. I bought the Kindle edition. If there were flaws, they were barely noticeable. Quite happy with the purchase.

Wonderful world building. Great plot, believable characters, nasty villains and flawed heroes. Above all, his best writing yet. Considering my last read was the ponderous "Hell's Foundations Quiver" - which I enjoyed (bit of a masochist I guess) - "Son of the Black Sword" was a rippingly good read. I've seen elsewhere that the first third of the book was slow, but compared to Weber's prose it was positively speedy. As always, Correia writes great action sequences, but it was the world building that stood out. Outstanding. I know these things take time, but more and sooner would be much appreciated!

Jay Lamborn
5.0 out of 5 stars Better than MHI
Reviewed in the United States on February 5, 2019
Verified Purchase
I'm a big fan of Monster Hunters International. It is, after all, Correia's seminal work, but this book was the best thing he's done, in my opinion. The world-building involved is immense. The character development is wonderful. I was totally taken by surprise with some of the plot twists. House of Assassins just came out and I cannot wait to dig in. This is an incredible work of sword and sorcery fantasy. If that's your thing (heck, even if it isn't), check this out.
Read more
8 people found this helpful
Helpful
Report abuse
See all reviews

Gregory
4.0 out of 5 stars Best of Correia, so far..
Reviewed in the United Kingdom on October 19, 2016
Verified Purchase
This is excellent and rich enough to almost be in Gemmel territory but Mr Correia is trying to do quite a lot at the same time and his novels suffer a bit from it. It is a shame because it wouldn't have taken much polish to make it perfect. Amateurs of his works won't be disappointed as it is probably his best in pure literary terms but you would be better starting with Monster Hunters or Hard Magic if you wanted to discover this brilliant and (over) prolific author.

I didn't name Gemmel in vain as this book has a very similar feel to his novels with the story revolving around the theme of the imperfect but unstoppable hero in a familiar yet completely exotic world. As usual, Correia isn't afraid to borrow myth and culture from many unlikely sources but the sauce takes and the world and its inhabitants are complex and completely believable. This is the first book in a series but it has a satisfying end and feels complete on its own.
Read more
Report abuse

Kindle Customer
5.0 out of 5 stars Great start to a series
Reviewed in the United Kingdom on June 21, 2017
Verified Purchase
Love finding a new series and this ticked all the boxes and kept me hooked from the beginning. Ashok is already a well developed interesting main character but only just beginning to explore his past and the history of the world Correia has created. You can feel inspirations from other great fantasy novels but it is an interesting new take that I look forward to reading more of.
Read more
One person found this helpful
Report abuse

Robert Morris
4.0 out of 5 stars Gemmell lives!
Reviewed in the United Kingdom on March 25, 2016
Verified Purchase
A mighty warrior, struggling between conscience and duty. A society built on cruelty at the verge of rebellion. Demons that are only held at bay by magical swords, which are possibly sentient or possessed, and wizards whose powers come from fragments of the black steel swords. All that really needs to be said about this novel is that fans of the late David Gemmell will find it tremendously enjoyable.
Read more
3 people found this helpful
Report abuse

bob blake
5.0 out of 5 stars a good decision. Very well thought out storyline
Reviewed in the United Kingdom on April 19, 2016
Verified Purchase
Another book bought on a whim, a good decision. Very well thought out storyline, great characters and enough action to satisfy everyone who likes that sort of thing. The main character is compelling and this book I imagine is the scene setter out of the series. A great read and I look forward to the next chapter.
Read more
One person found this helpful
Report abuse

Mr P
5.0 out of 5 stars Really good
Reviewed in the United Kingdom on February 2, 2016
Verified Purchase
I really enjoyed this book. It is well written and is very entertaining. I stayed up far too late to finish it!

A refreshing twist on ‘classic’ fantasy books, with an interesting world, some nice humour and plenty of action.

I already have my suspicions about the demons in the book and will be interested to see if my theories pan out. Hurry up with book 2 please.
Read more
One person found this helpful
Report abuse
See all reviews
Back to top
Get to Know Us
Make Money with Us
Amazon Payment Products
Let Us Help You
EnglishChoose a language for shopping. United StatesChoose a country/region for shopping.
© 1996-2021, Amazon.com, Inc. or its affiliates