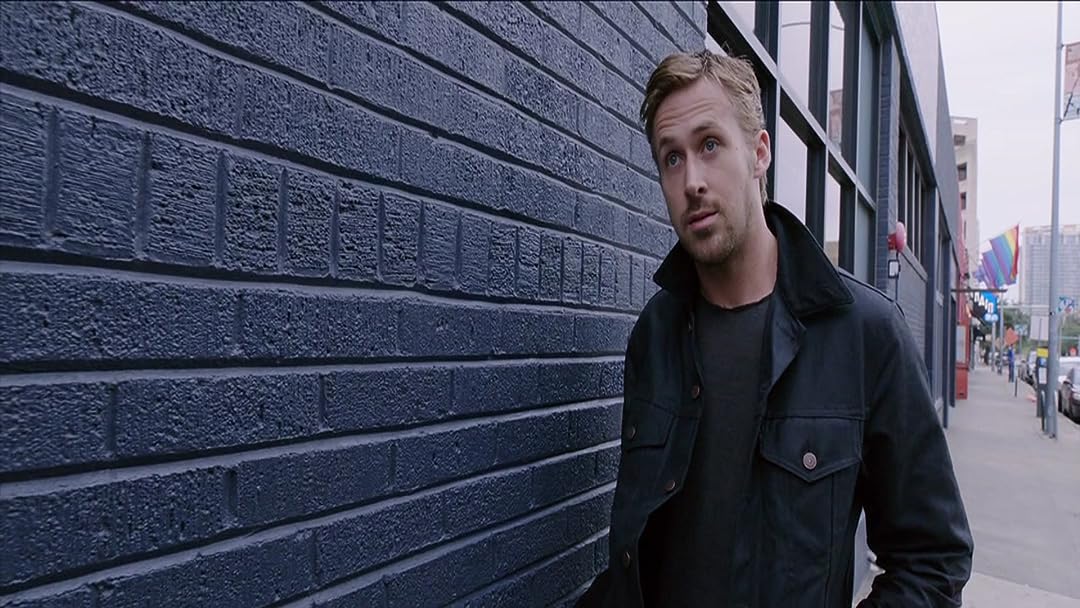 Julien AkleiReviewed in the United States on March 20, 2019
2.0 out of 5 stars
Zombie Slut Blobs Float through Ectoplasm in the Setting Sun
Verified purchase
I love movies that are slow paced, with a strong focus on setting & imagery. But 2/3's of the way through this film, I couldn't take it anymore and had to give up. This movie isn't slow in the sense of having a limited scope of action, it is slow in the sense of a zombie taking 20 minutes to mouth the word "hello" or a slut taking 20 minutes to walk down a hallway in high heels after a drug overdose.

I mention zombies & sluts because that is sort of the feeling of this film, like you're watching a zombie slut blob swim underwater in slow motion. It feels almost degraded. You could probably get the same effect by sticking your finger in a tub of vaseline and slowly running it over a glossy magazine photo, making sure to linger on all the private parts as tears drip out of your eyes.

If you like beautiful imagery, just go outside and watch the clouds.

Rob WhiteReviewed in the United States on January 23, 2018
5.0 out of 5 stars
a masterpiece
Verified purchase
Though I'm not surprised by all the negative reviews, I just watched this film closely for a second time and find it a masterpiece. Apparently it doesn't appeal to everyone. I have friends who would hate it. But if you are looking to be challenged with a thought provoking aesthetic experience, don't let the low average star rating scare you off. This is a beautiful film, beautifully acted.
35 people found this helpful

maxjam98Reviewed in the United States on April 6, 2019
1.0 out of 5 stars
Another cinematographical “treat” by Malick. Run!
Verified purchase
If I had known who directed this film, I wouldn’t have wasted my time. Another treat by the great Terrence Malick, who seems to eschew any kind of meaningful dialog in favor of artsy photography which doesn’t even add to the story and is incredibly difficult to follow. Thirty minutes in, I gave up and turned it off. What surprises me is that he gets big name stars to participate in this tripe. Why? So they can say they performed in this genre? That would be the genre that looks an awful lot like someone’s brain vomit (or a dream I had last night). If you enjoyed To The Wonder, you will likely find this latest Malick entry to be equally engaging. If, like me, you prefer to watch movies for entertainment as opposed to coma-inducing photography, then run. Run as fast as you can away from this movie and don’t regret the 2 hours of your life (or 30 minutes) you wasted on this film.
13 people found this helpful

One Lonely SisterReviewed in the United States on March 23, 2018
3.0 out of 5 stars
The inner musings of those lost in the allure of fortune and fame
Verified purchase
I'm torn. There's a very clear message and in a way it is wonderfully done. Money and power and the empty, endless pursuit of happiness through those means leads to destruction. All that is good is corrupted. It's so apparent between Natalie Portman and Michael Fassbender, but also between him and Rooney Mara. He destroys all he touches, because he is so damaged by the wealthy, limitless life he has lost himself in. The power of love and endurance is seen in Ryan Gosling and Rooney Mara. But it's not clean-cut and pure, and the same power that destroys takes a heavy toll on them, as they try to figure out who they are, how to find purpose, and accept a world beyond the dazzling lights of success and fame. The actors are touching and each one is a unique presence, fulfilling their part in the story: corrupter, destroyed, lost, and the one who makes you whole. I enjoyed the voice-over, which is the entire movie, so don't expect conversation or long dialogues. The hard part is that it skips from character to character and their inner thoughts so quickly, that it is hard to keep track of what is happening. The timeline could flow chronologically or bounce back and forth. It's not made clear. It's not meant to, but to emphasize the emotion and growth or desolation of each person. I appreciate it, but it was also distracting. The best way to approach it is to focus on what they say. That's the real meat of this movie, and the cinematography - beautifully and disturbingly done at the same time - is just visual support for what they are experiencing. Honestly, you could "watch" it with your eyes closed and still feel it. On one side, I'd give it a four. On the other, a two. In the end, it did move me and, while most of the images and scenes will fade away, I'll always remember how it left me feeling broken and hopeful at the same time. So, I compromised and gave it a three, which is better than most.
13 people found this helpful

KskyReviewed in the United States on November 10, 2019
5.0 out of 5 stars
Deeply thoughtful, tender and interior
Verified purchase
This movie moves through the maze of what is love and what is not. Of what is the idea of what we want and then what it is that is actually true. It shows the stories we think are real for ourselves, the fears and ambitions that we construct like tiny mirrors at slightly wrong angles, and the images once seen in them that dissolve though experience to the bare essence of what we truly feel to receive in our souls. If you see this film as a way to reflect on your own life, it asks us to look at ourselves, and ask the questions that help us feel the soft tender skin of our hearts and lead us to what is yet still more naked and open to true tenderness and love.
8 people found this helpful

HouyhnhnmReviewed in the United States on June 21, 2020
2.0 out of 5 stars
Wretched excess
Verified purchase
This is the first late Terrence Malick film I've seen. I didn't get anything out of "Badlands," didn't care much for "New World," couldn't get through "Thin Red Line." "Days of Heaven" I consider a masterpiece, though I don't want to watch it often. There is enough gorgeous cinematography and music to keep me engrossed for the running time of a little over 90 minutes. I don't want to watch it very often because the love triange plot is so thin.

"Song to Song" has many of the same elements, but amplified. Shot after shot is gorgeous, and the canvas is much bigger than "Heaven's" Alberta wheatfields. Malick luxuriates in opulent interiors, most of them spare and minimalist, but at least one is full-on Baroque, or a recreation of Baroque. Some of the interiors are modest but gorgeously lit. There are sunsets and birds and water, so many water shots it's either an obsession or some artistic statement I can't make out. Unlike "Heaven," "Song" luxuriates in long, slow foreplay by beautiful people. So much of it that it loses its romanticism or eroticism and seems to be Malick's obsession or some artistic statement about sex as performance or numbing or addiction. Unlike "Heaven's" single down-to-earth voiceover narrator, "Song's" principal narrator (Mara Rooney) makes a lot of maudlin comments about love and relationships. The other narrators, as I recall, mostly provide more of a straight commentary, but in dreamy voices like they are trying to be profound.

The shots were too repetitive and the story too slow for me to handle for the two hours-plus running time. 90 minutes would be stretching it. At some point I just wanted it to end, and by then I was too worn out to appreciate the final plot twist.

Rooney is a great choice for the lead actress. Her dreamy voice and face, and her vaunted ability to use silence fit the minimalist dialogue. The male leads, Gosling and Fassbender, seem to be caught in a movie they don't fit in, forcing themselves to follow Malick's direction. It's a relief when minor characters get some straightforward lines. The best is the sex worker who is struggling with the death of her fiance and describes her situation clearly and succinctly.

I don't see why Natalie Portman and Cate Blanchett bothered to take fairly small roles. Blanchett especially doesn't have much to do, and Portman's role wasn't very interesting to me. Did they just want a Malick movie on their acting resumes? Is he such a joy to work with that they had to give it a try?

Maybe there's a masterpiece here that I just need to figure out. Maybe there's 90 minutes of a masterpiece trying to get out. I could certainly do with a lot less screen time devoted to wrestling, dancing, caressing, and capering about. Maybe some day I'll have the energy to give it another chance. In the meantime, I rate it two stars. The only reason I give it two stars instead of one is because it's a visual feast -- to the point of gluttony.

AshleyReviewed in the United States on February 13, 2019
4.0 out of 5 stars
Tryna Get These Grandkids Yet Again
Verified purchase
So I'm left wondering, how many times is Cate gonna be willing to play the self-same sorry position? How many times are chicks feet gonna wind up in dude's mouths? And of course not being anywhere near adjacent to anyone or anything depicted I am existentially irked. It's my own problem though. Can't fault the man for writing what he knows nor can I say it wasn't good. It absolutely was, and it was cohesive. Knight of Cups (My 1st Malick) seemed SO random and meandering but the flow and pacing was excellent here I was actually invested in the storyline, rather than just waiting for a certain someone to pop up on screen. Rooney and Ryan were surprisingly easy to root for (even with her MAJOR malfunctions) Two scenes were particularly memorable, the one with Natalie and the hooker ..and the scene with Cate and the pearls. Wonder what THAT represented. Cute. Cate's whole story line made me want to break a guitar over ol terry's head. It was the same as in KOC. I'm tired of him doing that to her even if she isn't. Likely she's quite down with that messaging as she's already done her part to propagate the species and is now tryna get these grandkids. But if I see that mess again.. all bets are off.
3 people found this helpful
See all reviews
Back to top
Get to Know Us
Make Money with Us
Amazon Payment Products
Let Us Help You
EnglishChoose a language for shopping. United StatesChoose a country/region for shopping.
© 1996-2022, Amazon.com, Inc. or its affiliates