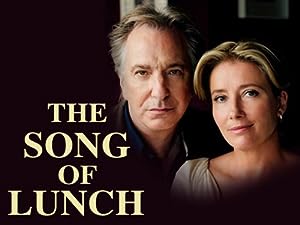 Season 1
(152)
7.5201013+
Based on Christopher Reid's narrative poem, The Song of Lunch follows the story of an unnamed book editor who, 15 years after their break-up, is meeting his former love for a nostalgic lunch at the Soho restaurant they used to frequent. As the wine flows, and the couple muse over their failed relationship, nostalgia slowly turns to accusation.

High HopesReviewed in the United States on November 7, 2021
5.0 out of 5 stars
ABSOLUTELY FANTASTIC!
Verified purchase
Why oh why are we not served more gourmet treats for the eyes, ears, and mind like this? The Song of Lunch manages to slips through all the garbage and nonsense that is today's streaming fare to show us that sometimes -- rarely, but sometimes, someone has vision and insight enough to create something really wonderful and valuable and memorable. This is tragic and amusing both at once, and goes along without a hint of which of those opposing emotions we 'should' be feeling about any look or word or masterful scene. Will be something I return to a number of times, I'm sure, when starved for something of quality and depth.
19 people found this helpful

Doobie DoReviewed in the United States on October 5, 2021
5.0 out of 5 stars
Awesome to the empathic mind
Verified purchase
These two are my favourite actors, and they did not disappoint. Their performances here went well beyond their words. Both of them were superb, I loved this story. The sadness of Rickman, and Emma's sadness for him were palpable.
20 people found this helpful

alltatupReviewed in the United States on November 1, 2021
5.0 out of 5 stars
RICKMAN THE ELOQUENT, THE SARDONIC, THE WEARER OF BROKEN HEART ON SLEEVE
Verified purchase
I just watched this for the first time and fell more madly and deeply in love with Rickman than ever before, which I didn't think was humanly possible. Reid's poem is gorgeous: I laughed out loud, and it took my breath away with its defensive honesty, its drunken lovesickness, and its unabashed obnoxiousness. How else can one defend oneself?

Emma Thompson as The Woman is all lovliness, rational and honest, impatient with The Man's utter inability to own his true feelings, which are drowned under the better part of two bottles of chianti. It was so flippant and so eloquent, so depressingly honest and so hilarious.

S. FraleyReviewed in the United States on October 17, 2021
4.0 out of 5 stars
Well done adaptation
Verified purchase
A well done adaptation of a poem by Christopher Reid. Alan Rickman and Emma Thompson are superb.
11 people found this helpful

PaulaReviewed in the United States on November 14, 2021
2.0 out of 5 stars
Should have stayed on paper
Verified purchase
I can't imagine why anyone would convert this poem to film other than because he simply had a vision on how to do it, and so carried it out like an exercise. There's nothing new to the story this poem relates, no new twist on the cliched tale of a reunion between two old lovers, in which she has moved on and he wallows in alcoholic remembrance and lust. Thompson and Rickman give excellent performances, but the majority of this film involves the camera fixed on Rickman's heavy-lidded and increasingly glazed gaze as he drinks his way through their lunch, getting lost in his own fantasies. One might feel sorry for him if he didn't come across as such a prick. It's no wonder she left him years ago. If you're interested in this story, just go read it and let your own imagination bring it to life--- don't waste your time on this slog.
4 people found this helpful

PATReviewed in the United States on August 5, 2016
5.0 out of 5 stars
A brief encounter with loss.
Verified purchase
Perhaps because I am "older" I really appreciate the story-which is a free-text poem, narrated by Alan Rickman and portrayed by Emma Thompson with Rickman. This was originally aired as part of a BBC series, and is more like a 1-act play in duration and feel. It is, in my opinion, a beautiful story, sad but engaging. Alan Rickman could do no wrong as an actor. His character is not very likable, but somehow the bitterness is so understandable simply due to his facial expressions, body language and narrative abilities. Emma Thompson is lovely and graceful. And totally believable.

The story is a familiar human theme. A former couple reunite after 15 years over a lunch, apparently organized by "He" (the characters have no names). "He" is obviously anxious and eager to again meet his former love. "She" arrives, lovely and erudite in her maturation. She too is obviously a bit nervous, but hopefully positive about the meeting. Almost as soon as she takes her seat, the meeting begins to turn sour.

Expectations from "He" are too well-covered by the bitterness of love lost and a life of unfulfilled aspirations. "She" wants to connect on a level reflecting growth and a well-lived life with what was once positive in their relationship. He is stuck in the past bitterness and anger. She cannot - and has no desire to - go back other than to recall and perhaps reconnect with that which was good. As the lunch progresses, She reaches out but is thwarted at almost every proffered gesture. He only reaches inward, ordering wine and then drinking most of it as if to gain some kind of courage. In reality He only devolves further into the bitterness until he becomes only that. His internal soliloquy throughout the production is heartbreakingly selfish and lost. In the end they part. Again not well, and finally.

I love this production. It is beautifully done in every aspect. The story line is not everyone's cup of tea. But I recommend it highly for anyone who has ever had the experience of "losing once or twice".
24 people found this helpful

Elegant FurnishingsReviewed in the United States on November 8, 2021
5.0 out of 5 stars
Realistic, Thought Provoking, And Mature
Verified purchase
Alan Rickman's voice was majestic; who better to narrate The Song of Lunch? The editor was a pompous ass in his youth. Fifteen years later, he had not changed; his future as an older man does not show promise. The poetic drama carries the message we can not recapture the past. Some past moments are not worth recapturing. In reflection, we are not remembered by others as we recall ourselves. In this writer's opinion, the poetic drama is beautifully realistic.
3 people found this helpful
See all reviews
Back to top
Get to Know Us
Make Money with Us
Amazon Payment Products
Let Us Help You
EnglishChoose a language for shopping. United StatesChoose a country/region for shopping.
© 1996-2022, Amazon.com, Inc. or its affiliates