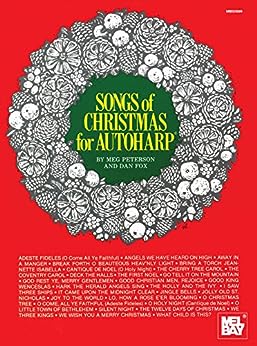 Meg Peterson is the premier Autoharp teacher in the U. S. She has introduced thousands of people-- teachers, students, young and old-- to the delights of this versatile instrument. She has spent the last thirty years collecting and transcribing traditional and innovative ways to play the autoharp, which has resulted in the writing and arranging of thirty books. In her first method book, written in 1965, she introduced her own scoring tablature that has become universal to all autoharp pickers, from beginners to advanced players. Since the autoharp arrived on the musical scene relatively recently, as musical history goes, very few people had learned to do anything with it, except push buttons and stroke. Meg, therefore, invented many of the strums and new techniques shown in her books, using existing guitar and banjo patterns as guidelines, and transcribed them in a way that is playable on the autoharp. As a result, the autoharp has come into its own as an integral and respected part of country and bluegrass combos. Meg has travelled widely, giving workshops as far away as Australia, England, and South Africa, and has been a judge at the Walnut Valley Festial in Winfield, Kansas. In July 1995 Meg was inducted into the Autoharp Hall of Fame for her exceptional contribution to the autoharp community. Meg is also a violinist and was educational director of Oscal Schmidt International for 15 years. During that time she worked extensively with music educators, classroom teachers, music therapists and special educators, showing them how to use the autoharp in their teaching programs. Ms. Peterson also served as executive director of Music Education for the Handicapped for six years, during which time she ran three international symposia. --This text refers to the paperback edition.

FishTech
5.0 out of 5 stars Meg Peterson books about Autoharps are the best I've been able to find.
Reviewed in the United States on March 29, 2017
Verified Purchase
Autoharps aren't the rage they once were but my wife really wanted one and then requested some books to help her learn more about how to play it and take care of it. There aren't many new books about them so you have to look for older books and most were written by Meg Peterson. Look for a good price on these out of print books and find one that has the type of music you want to play on your autoharp. My wife loved all these books and it has helped her learn more about autoharp cords and how to play certain songs on the autoharp. She's learning how to play it much faster than I thought she'd be able to learn it and she's happy with the books I've purchased for her.
Read more
3 people found this helpful
Helpful
Report abuse

Terri
5.0 out of 5 stars Great for beginner
Reviewed in the United States on January 8, 2014
Verified Purchase
I purchased a used autoharp at the beginning of November 2013. I have never played a musical instrument, had limited music reading from decades in a choir.

This book has basic and advanced tablature for most of the songs so that you can play a basic strumming rhythm or a more advanced melody. By Christmas I was able to play all the songs in the book written for 15 chord harps, which is what I have. Only a couple songs needed a 21 chord 'harp, and I was even able to work out something on "The Coventry Carol" that worked for my 15 chord 'harp.

It was wonderful to be able to play Christmas carols on my new-to-me 'harp. I have wanted to play an instrument for my entire life, and wanted a 'harp since kindergarten. This book made my first Christmas with my 'harp a really wonderful one.
Read more
4 people found this helpful
Helpful
Report abuse

SqueezeBox
5.0 out of 5 stars A great beginner book
Reviewed in the United States on January 30, 2021
Verified Purchase
Nice simple music that is easy to play. You’ll like it.
Read more
Helpful
Report abuse

Kathleen
4.0 out of 5 stars good collection of tunes.
Reviewed in the United States on January 8, 2015
Verified Purchase
I really appreciate this collection for the Autoharp. Such favorites! My only complaint is that sometimes, to get everything on the page, it can be difficult to follow the chording.
Worth it.
Read more
3 people found this helpful
Helpful
Report abuse

Todd Shearer
5.0 out of 5 stars Excellent format.
Reviewed in the United States on November 6, 2012
Verified Purchase
This Christmas selection is quite pleasant and easy to follow. Great for beginners and advanced players alike. After 40 years as a woodwind player, I decided to pick up the chromaharp last Christmas. This book is easy to understand as well helping me to learn new strumming patterns.
Read more
4 people found this helpful
Helpful
Report abuse

CWE
3.0 out of 5 stars Three Stars
Reviewed in the United States on June 18, 2018
Verified Purchase
Wish you had a CD hard for beginners.
Read more
Helpful
Report abuse
See all reviews

Julie Wynands
5.0 out of 5 stars Five Stars
Reviewed in Canada on April 20, 2018
Verified Purchase
Great tunes and easy to read and understand for a newbie like me. Thanks.
Read more
Report abuse

P. Harrison
3.0 out of 5 stars Songs of Christmas for Autoharp
Reviewed in Germany on November 4, 2014
Verified Purchase
For me Christmas is celebrating the birth of Christ. This book contains some good carols but also songs sang at Christmas that have little or nothing to do with Christ's birth.
Design and printing is good.
Read more
Report abuse
See all reviews