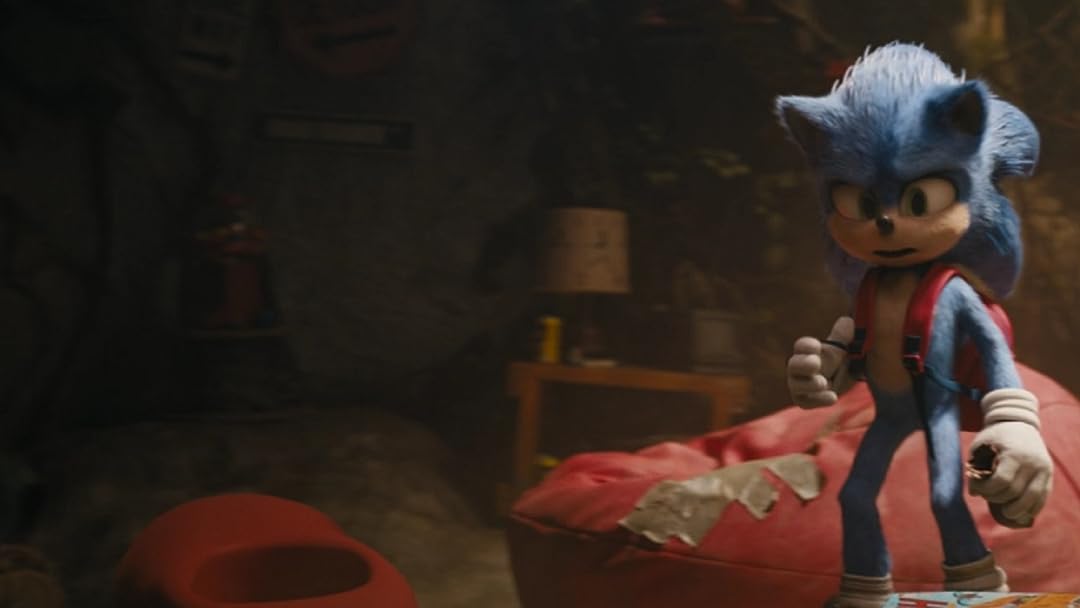 (118,694)6.51 h 38 min2020X-RayPG
SONIC THE HEDGEHOG tells the story of the world's speediest hedgehog as he embraces his new home on Earth. Sonic and his new best friend Tom team up to defend the planet from the evil genius Dr. Robotnik and his plans for world domination.

Toon ReviewReviewed in the United States on February 17, 2020
5.0 out of 5 stars
The Movie I always wanted
This was a great movie about an alien from another world wanting a friend....I know it's been done but not with Sonic. This movie and Detective Pikachu definitely broke the video game into movies curse that has plagued us since....[shudders] Super Mario Bros. Jim Carrey was a perfect Dr. Robotnik and Ben Schwartz was the ideal voice for our iconic blue blue. Definitely worth seeing again and again hoping for a sequel
259 people found this helpful

MacJunegrandReviewed in the United States on February 20, 2020
5.0 out of 5 stars
Extremely entertaining
"Sonic the Hedgehog" had four major things going against it. First, it's a movie based on a videogame, which are notorious for not understanding nor caring for the source material. Second, it's a live-action/CGI hybrid, which are generally lazy and uninspired. Third, it came out several years after the character had major relevance, which reeks of nostalgia exploiting. And fourth, the design for the titular character was terrible. It's quite telling how, against all expectations, it managed to push through every single one of these issues.

The most obvious is, of course, the character redesign. After literally everyone on Earth was horrified by the original design, they decided to change it. A lot of people think that was some sort of publicity stunt, but the reality points to the director using the negative feedback to change what was undoubtedly a studio-mandated decision.

As for the other points... I'll say it outright. This movie doesn't break any new ground, but what it does it does right and isn't content with delivering a paint-by-numbers product. If you've seen any other movies of this kind (such as The Smurfs or Alvin and the Chipmunks), you can already guess how the plot is going to play out. Unlike those movies, though, this one doesn't insult your intelligence.

There are a lot of familiar tropes in this movie, but they're actually well thought out. Yes, Sonic seems obsessed with current pop culture, but there's a valid reason given for it. Yes, Sonic goes into a road trip with a human rather than using his abilities, but there's a clever (though subtle) explanation for it. A lot of familiar territory is covered with attractive scenery as to make the trip more interesting.

The humor in this movie is actually pretty clever rather than the usual "it's for kids, and they'll laugh at anything" excuse (save for the inevitable fart joke, which is likely another studio decision), and the references to the source material are interesting and respectful.

Extra points have to be given to the villain. Villains are rarely the high points of these movies, but this is a major exception. Not only Jim Carrey's Dr. Robotnik is a proper representation of the original, he actually elevates him. And yes, he's bloody hilarious.

A couple of subplots are introduced and then completely ignored, but in general the story is well written and well acted. There are no annoying characters, which is extremely rare for this kind of film. And while Sonic'a new design is a bit more cartoonish than the first one, it meshes much better with the real world by virtue of acting and animation.

This movie is not particularly original, but it's certainly very entertaining. Parents tend to roll their eyes and groan at how awful these movies tend to be, but this time they're likely to be at least as entertained as the kids, and likely even more.

MikeReviewed in the United States on April 1, 2020
5.0 out of 5 stars
Really fun movie!
Verified purchase
If you're complaining about a Sonic movie being aimed at kids, get a life. What were you expecting? It's a fun, sweet movie that takes you out of the real world for 90 minutes, like it was intended to do. Jim Carrey plays the heel really well and will probably get better in the follow ups if they make them. Lots of fun easter eggs for folks who grew up playing the games. Come on people. Lighten up. It's a Sonic the Hedgehog movie for crying out loud.
94 people found this helpful

T. LacroceReviewed in the United States on April 1, 2020
1.0 out of 5 stars
An astoundingly bad movie, and we cannot believe we now own it.
Verified purchase
The 4.5 star rating is baffling and extremely misleading. We are family fans of both Sonic and Jim Carrey, but this was a stunningly bad movie, disorganized and frequently incoherent. We really don't write bad reviews, but decided to make an exception since it was also expensive and not even available for rent. Enjoy our $20 I guess.
80 people found this helpful

James MaceReviewed in the United States on April 1, 2020
5.0 out of 5 stars
An absolute delight!
Verified purchase
As other reviewers have mentioned, this film had a lot going against it, the most significant being the now-notorious initial design of Sonic. That first look was so hideous that it alone could have sunk this film. The other major obstacle was the stigma surrounding movies based on video games, which tend to vary in quality between awful and unwatchable (Super Mario Bros, anyone?). There was also the collective groan from Sonic fans when the trailers showed that it is yet another CGI / live-action hybrid set in the modern world; which has been seriously done to death. All that said, the Sonic the Hedgehog movie was nothing short of a delight! The human characters have their own story arc, which unlike most other CGI / live-action films is more of a side-story than the main plot. They were also very likable and did not distract from Sonic, who never ceases being the centre of the story. Ben Schwartz also completely embodies the character. I cannot watch the old Sonic cartoons or listen to the audio sequences in the later games now, as the voices are uninspiring by comparison. And yes, I do agree with the general consensus that Jim Carey is completely on-form as Doctor Robotnik. It's 'Classic Carey' taken to 11, yet it also remains restrained within the character, and never felt like he was overshadowing Sonic. While ostensibly a kids' movie, it is still very entertaining for adults (my wife and I don't even have kids and we enjoyed it). The story is pretty straightforward, but if / when it gets a sequel, the ending leaves it open for a complete expansion of the Sonic Universe. Overall, a fun and delightful film.
63 people found this helpful

JeremyReviewed in the United States on March 31, 2020
5.0 out of 5 stars
New word
Verified purchase
I learned a new word "rock-connaissance" from this really awesome movie.
68 people found this helpful

Arron Mc NeillReviewed in the United States on April 3, 2020
5.0 out of 5 stars
Must Watch
Verified purchase
This movie is graet, I had no high expectations for this but left with high hopes for the next Movie. The catch at the end (No spoilers) made me even more hipe for Sonic 2 [if ever or Disney dosn't get jelly an kill it]. Jim karry play Doctor Egg-man aka Robotnic perfic and the voice acter form sonic sounds spot on. If I must say one bad thing about the movie is the games made it clear that everyone not from his world sees Sonice like a normal Hedgehog much like the seans from spunge bob when hes out of water. All in All its a Graet Movie full stars.
57 people found this helpful

Tina G.Reviewed in the United States on April 2, 2020
4.0 out of 5 stars
A movie for the whole fam...
Verified purchase
Whether you’re a Sonic fan or just looking for a movie to pass the time, def give this one a watch. Kept my interest overall, 4 stars.

What’s it about? Young Sonic was raised by Longclaw until one day when showing off his powers, the bad guys discover him, resulting in Sonic fleeing to another world (Earth) via his rings and leaving an injured Longclaw behind. Now older and living in Green Hills, he follows a couple he calls Tom “The Donut Lord” (Marsden) and Maddie “The Pretzel Lady” (Sumpter), as he longs to be part of their family. Getting upset one evening realizing that isn’t going to happen, he triggers power outages along the Pacific Northwest resulting in the government requesting help from the crazy Doctor Robotnik (Carey). While fleeing from Dr. Robotnik, he is discovered by Tom who tranqs him with one of Maddie’s veterinarian darts. During this incident, Sonic’s bag of rings falls through a ring that is open to San Francisco. Tom agrees to help Sonic get his rings back while the duo plays a cat and mouse game with Dr. Robotnik. They tackle some of Sonic’s bucket list along the way and eventually meet up with Maddie and her family. There is a happy ending and an opening for another movie (and what movie wouldn’t be complete without a couple product placements?).

Marsden is def the shinning star in this one with Schwartz and Sumpter not far behind. Carey is OK (nothing we haven’t seen before, not convinced he was the one for this role, but maybe you’ll feel different). Some of the filler scenes (bar/hotel) were just OK. Scenes with Maddie’s sister/niece were more amusing (wish they would have used Jojo a bit more). There are some pop-culture references, action is steady, and humor pretty decent. It’s a movie the whole family can enjoy, but if you are a fan of Sonic, you’ll appreciate it more.

Parental guidance/trigger warnings (may contain minor spoilers): Dr. R tries to kill Sonic or Tom a couple times, drones that shoot bullets/attack, a guy gets punched once in the face, bullying mention once (Dr. R. as a child), bar fight, a guy gets punched once in the chest, Sonic pushes Tom and Maddie off a ledge to save their lives and then saves them. Language used: hella x1, hell x1. It should be noted for potential seizure trigger- Sonic emits bright blue lights at times, somewhat flashing but more of trails.
40 people found this helpful
See all reviews
Back to top
Get to Know Us
Make Money with Us
Amazon Payment Products
Let Us Help You
EnglishChoose a language for shopping. United StatesChoose a country/region for shopping.
© 1996-2021, Amazon.com, Inc. or its affiliates