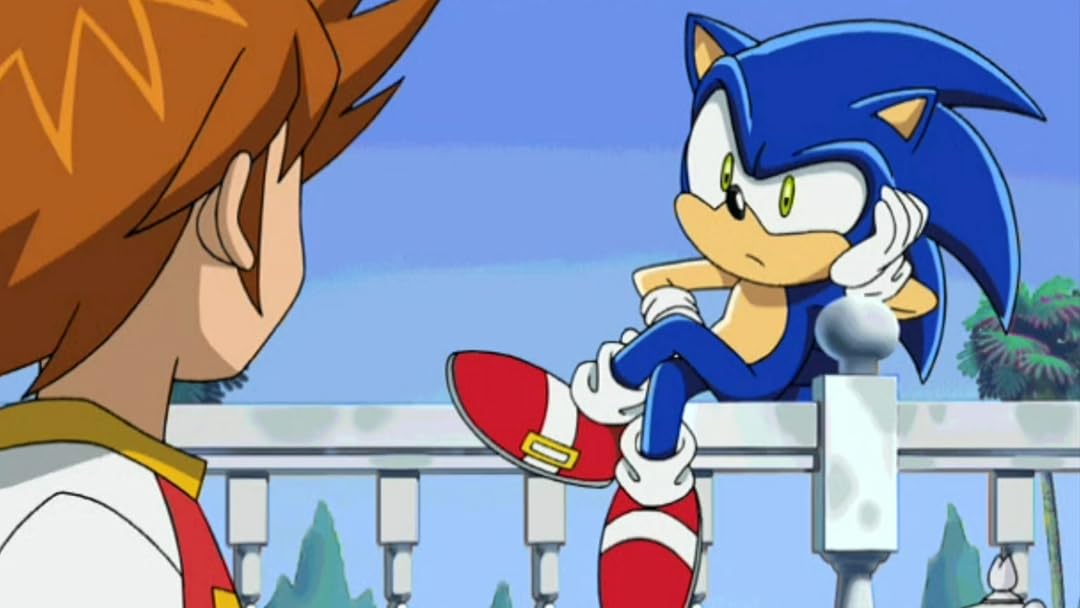 (16)
2003X-RayTV-Y7
Sonic, his friends, and the evil Dr. Eggman are sucked into a warp! They find themselves in the human world where Sonic finds a new friend, a young boy named Chris. Sonic speeds through battles with Eggman, trying to retrieve all of the Chaos Emeralds so that everyone can go back home!

To start with this is a below average 4Kids Macekre where their usual habit of pissing in the soup is even more detrimental to the end product. Cuts and edits that make no sense (search youtube for " 4kidsjelly donut" and their nonsensical habit of erasing all written words. That last edit might not sound so bad but a part of this show's humor is this Looney-Tunes-esque 4th wall breaking gag where Sonic will hold up a sign that has a sarcastic quip on it now thanks to 4kids entire jokes are completely nonsensical stretches of absolute nothing. But not of that compares to the horrible job they did with the audio.

The Japanese version at least has voices that don't sound like they're trying too hard to sound like kids. I can put up with Japanese voices because the Japanese voices were clearly performed by individuals who were competent. The 4kids voices are such garbage that only 2 of them are bearable. Knuckles sounds like a 45-year-old man, Sonic can't emote to save his life, most all of them are clearly trying to use a ridiculous accent to cover up their gender and lack of talent, and the younger characters are so terrible they make me want to puncture my eardum.

The music is the one place Sonic has always excelled at even '06 isn't attacked for it's music. The original Japanese soundtrack actually sounds like Sonic music. So of course 4Kids ripped out all the great tracks and replaced it with their mediocre melodies. Gone is the excitement of the Japanese soundtrack replaced with this horribly generic pseudo-orchestra that sounds like every other trying-to-hard-to-sound-like-a-movie soundtrack ever. And the English music plays...ENDLESSLY. The Japanese audio leaves room for the story to breathe but 4Kids apparently thinks that if they aren't constantly blasting their generic trash every second kids will lose interest. They even went so far as to replace "Live and Learn" (one of the greatest Sonic songs created which was played for the season 2 finale of Sonic X) with their generic trash.

But the problems with Sonic X don't start and end with 4Kids, no amount of great music and talent can save a show from terrible writing and animation.
The "animation" for lack of a better term is 90% slideshow with moving lip flaps, 9% recycled footage, and 1% actual animation. None of the characters feel lively and expressive and I swear they reuse the same 3 poses hundreds of times over the seasons copy pasted onto different backgrounds.

I saved the greatest sin for last- Chris. This shoe-horned character is a perpetual thorn in the side of every Sonic fan. He's unnecessary- we already have Tails to act as the audience stand-in admiring Sonic and tinkering with machines we didn't need this scrappy and his friends, he actually takes character moments away from characters like Amy so his very existence leaves the cast more flat and underdeveloped than they already were, his friends and family are a giant waste of time that take away the spotlight from characters WE ACTUALLY WANT TO SEE to the point where characters like Sonic, Knuckles, and Amy are practically guest appearances in their own bloody show, and he's so generic that 90% of his lines could be said by another character and nothing would be lost.
The only reason this show doesn't get a 0 from me is because Amazon's scale starts at one star.

john e. crawReviewed in the United States on October 29, 2018
5.0 out of 5 stars
sonic x
I love sonic x I want more episodes
26 people found this helpful

Aerith GainsboroughReviewed in the United States on August 30, 2019
5.0 out of 5 stars
Put on the Japanese Audio as it SHOULD BE.
Cannot for the life of me watch anime in English, Ever. I refuse it. This was a decent Sonic the Hedgehog anime, but only in Japanese. Get us the audio that it should have remained in with subtitles and a lot more people may enjoy it. I did enjoy this when it first came out, being a big Sonic fan of course I had to see this one.I love the classic Saturday morning cartoon the best, and even the funny one from the early 90's.
12 people found this helpful

EthanReviewed in the United States on January 17, 2019
5.0 out of 5 stars
Great cartoon
Fun and very well animated cartoon!
18 people found this helpful

Ruto SaudaReviewed in the United States on January 9, 2019
5.0 out of 5 stars
Its a ride
Its good for what it is
14 people found this helpful

Amazon CustomerReviewed in the United States on November 28, 2018
1.0 out of 5 stars
tryhard
Omega-lame
12 people found this helpful

Clint MalsonReviewed in the United States on November 19, 2018
5.0 out of 5 stars
amazing quality comedy content, from the very first scene.
i liked it
15 people found this helpful
See all reviews
Back to top
Get to Know Us
Make Money with Us
Amazon Payment Products
Let Us Help You
EnglishChoose a language for shopping. United StatesChoose a country/region for shopping.
© 1996-2022, Amazon.com, Inc. or its affiliates