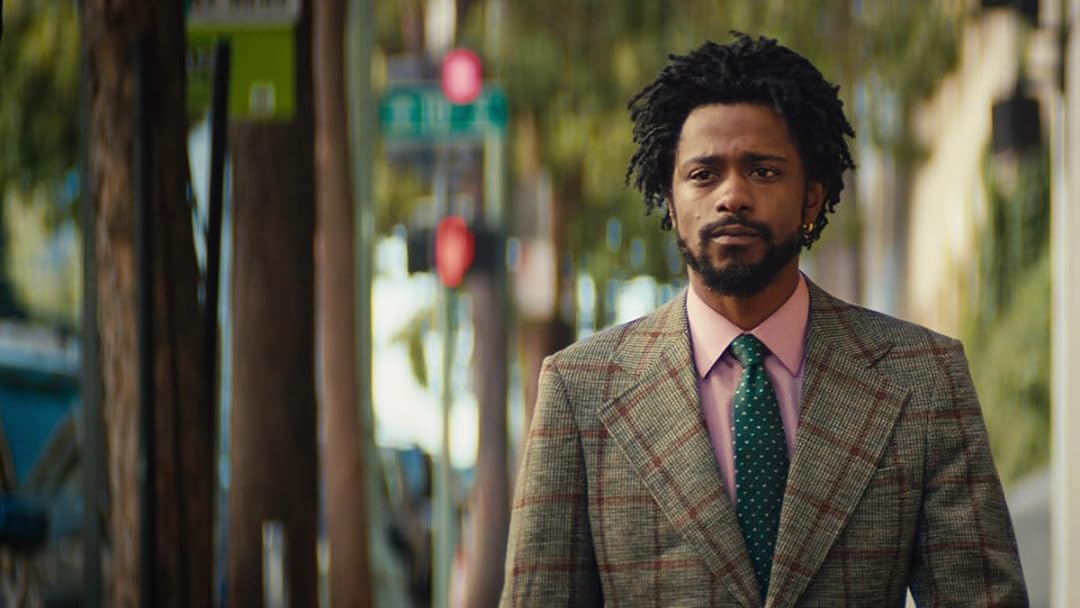 Sorry To Bother You

(2,446)6.91 h 50 min2018X-RayR
In an alternate present-day version of Oakland, black telemarketer Cassius Green discovers a magical key to professional success, which propels him into a macabre universe of "powercalling" that leads to material glory.

Al GreenReviewed in the United States on October 20, 2018
5.0 out of 5 stars
BRILLIANT!! But not for everyone
Verified purchase
This movie is powerful but not for everyone. The messages are deep and meaningful but if having to use deeper thought is not your thing you will not like this movie. The comedy is good and the is acting intentionally over the top in some areas to give the viewer the feeling of a parody. Boots Riley knocks it out of the park with an all star cast that looks at corporate greed, racism etc all in a sci fi genre. I can see why some will love it but others will hate it.
68 people found this helpful

KettleZonkReviewed in the United States on November 21, 2018
5.0 out of 5 stars
A brilliant corporate satire from a gifted black voice
Verified purchase
Let's start out by saying that this movie isn't for everyone. Commercials made it seem like "Sorry to Bother You" is a wacky workplace comedy. That's where "Sorry" starts, but it goes way beyond that. If you know you're going to see a dark science fiction comedy more along the lines of "Idiocracy" than "Office Space," I think you'll appreciate it more.

"Sorry" is about Cassius "Cash" Green (Lakeith Stanfield), a down on his luck black guy with no real skills who lives in his uncle's garage, and worries about whether he'll make a difference in life. By his side is his girlfriend (Tessa Thompson), an avant-garde artist and revolutionary.

Cash gets a job at a telemarketing firm where he discovers a hidden talent to speak in a "white voice" (brilliantly dubbed by David Cross) that catapults him into success. When everyone else at his call center tries to organize a union, he sacrifices his principles to cross the picket line and keep making more money.

The movie is really about Cash and how far he's willing to give up his principles for money. First, it's scam products. Then he gets promoted to sell WorryFree, a program where people become slaves in exchange for a lifetime of guaranteed room and board.

The point where the movie really goes off the rails is when Cash is taken to a party where he's offered the most twisted and horrifying job I could ever imagine. I won't spoil the surprise, but it's jaw-dropping and is the point where you're either in or out. I personally was in, because I saw how it was trying to show how corporate America tries to control its employees.

As someone who's worked in call centers for years, the frustration and moral struggle Cash went through rang true. There's also a great message about how greed can cause people to stop caring about others. There's also a lot of wonderful running gags and side jokes, like Cash having to pull the windshield wipers on his old car with a rope, and his girlfriend's crazy earrings.

More importantly, "Sorry to Bother You" shows how diversity can lead to new perspectives. I think only an African-American would have pursued the idea of slavery and dehumanization in this movie, and the struggles of Cash to fit into the white world where he's forced to freestyle rap and use a "white voice."

If you want to see a movie that's truly different in both comedy and science fiction, check this out. If you just want to see a lampoon of corporate America, check out "Office Space."

AliciaReviewed in the United States on November 5, 2018
1.0 out of 5 stars
Too bad I watched this.
Verified purchase
I was super disappointed with this movie. The trailer showed a comedy, this was just a bizarre twisted story and waste of the short time I have with my husband and on planet earth! Without spoiling it for anyone, you should enjoy this movie if you are experimenting with hallucinogens, otherwise find a different way to spend your time and money. And shame on you Danny Glover for allowing yourself to be exploited in the trailer when you are at best an extra background character which they used to give this movie credibility. If they had the ability to rate this movie with negative number stars I would give it -1. As they had a few funny scenes unfortunately those were the same scenes shown in the trailer. Oh yea and it's too bad that the guy I like so much from white chicks and the old spice commercial had to be associated with this one too although the few scenes he had are funny. The whole damn storyline is just too crazy for me and there was no warning that this was bordering sci-fy fantasy from the trailer. Frankly, I am really pissed about it, which is not my style, but so much so that I am writing the first review for any product , film, restaurant EVER! It actually inspired me to warn others.
44 people found this helpful

Paul AllaerReviewed in the United States on July 14, 2018
4.0 out of 5 stars
Wild social satire is all over the map
"Sorry To Bother You" (2018 release; 105 min.) brings the story of Cassius "Cash" Green. As the movie opens, he is caught lying on his resume during a job interview at RegalView Telemarketing. He can't believe his good luck when he's offered the job anyway. "Just stick to the script", his new boss tells him. Later we get to know Cash's fiancee Detroit. When Cash starts his job selling encyclopedias, it takes him a while to find his groove. An older coworker gives him some advice: "Use the white voice"... At this point we are 10 min. into the movie but to tell you more of the plot would spoil your viewing experience, you'll just have to see for yourself how it all plays out.

Couple of comments: this is the movie writing-directing debut of Boots Riley, best known for his rapping band The Coup (whose 2012 album is also called "Sorry to Bother You"). Here he goes the social satire route, by way of a wild (and wildly imaginative) tale set in Oakland in the near future. The farther we get into the movie, the crazier it becomes. Riley tackles many issues, including racial stereotyping and prejudice, cheap labor/unionization, police brutality, and so on. Yet the movie is at times hilariously funny too. In other words: this movie is all over the map. Sometimes it works, other times it steers off course, if not off the tracks altogether. LaKeith Stanfield, best known for his prior role as Snoop Dogg in "Straight Outta Compton", delivers another outstanding performance as Cash. Danny Glover has a small role as the older coworker. If I have one word of caution, it's that the movie's trailer, which I had seen, is not indicative of what the full movie really is all about. So keep an open mind, and roll along with the punches.

"Sorry To Bother You" premiered at this year's Sundance festival to immediate buzz and critical acclaim. The movie finally expanded wider this weekend, and opened on about 6-7 screens for all of Greater Cincinnati. The Friday early evening screening where I saw this at was not attended well at all, much to my surprise. If you are in the mood for a wild and at times over the top social satire, I'd readily suggest you check out this out, be it in the theater, on VOD, or eventually on DVD/Blu-ray.
69 people found this helpful

RundskopReviewed in the United States on November 23, 2018
1.0 out of 5 stars
Complete Garbage
Verified purchase
A terrible movie. Any reviewer saying it's thought provoking, socially current or relevant in any way is such an "above the surface" type of person it scares me.

This was not a funny or interesting movie in the least bit. The character dynamics are not at all new or compelling - but instead cliche and predictable.

I'm shocked to see such a poorly thought out move with current ratings higher than 1 Star. The fact that audiences enjoyed this is frighteningly telling of how intellectually bankrupt society is becoming.
17 people found this helpful

InOrlandoReviewed in the United States on January 1, 2019
1.0 out of 5 stars
Annoying Post-Modern Surrealist Effects
Verified purchase
My son highly recommended this "woke" comedy, but I couldn't finish watching it--and I've tried twice. I give up. Although I appreciate the comedic talents of the main character, and I "get" the political messages, I couldn't get past the inexplicable, gratuitous, surrealist effects: floating desks, space/time travel, etc. They all seem too forced--as if the writer/director was trying to "make a statement," but it's the same statement made over and over, again. We get it, already. But why the weird effects? They obscure the point and foreground technical expertise at the expense of artistic imagination/vision.

The film felt faintly like early Spike Lee (if he were into reading Afro-futurism at the time).

If it were a novel or short story, I'd say it lacked maturity or it needed another revision. Subtlety is apparently a lost art...
8 people found this helpful

EctoPrimeReviewed in the United States on November 13, 2018
5.0 out of 5 stars
Fantastic, one of my favs this year
Verified purchase
Don't read any in depth reviews and try to go in blind. What a good movie. I like a good weird movie and this was one of the better ones this year. I knew it was a call center comedy but it's way better than that. Movie isn't for kids for sure. There's a small group of people it's for and I bet we would all be friends.
13 people found this helpful

Dave HartReviewed in the United States on January 20, 2019
4.0 out of 5 stars
Some very deep connections made
Verified purchase
This movie is really, really good. It works on many different levels, political, social caste, cultural, and of course at the personal boy has girl, boy loses girl, boy wins girl back. But it is the deep intersection of race and economic control that is most startling. I didn't expect it to hold together as well as it did. Okay, the ending is a little too easy, but a quick way to grind to a halt and is the only reason for four stars. I'd give it four and 1/2 if I could. My reference great movie is "Dr. Strangelove" because it bears rewatching and it has so many scenes that almost stand by themselves and that never leave you. The number of such scenes are what separates the very best from really good. There are a couple in this movie: the Danny Glover character's instructions on how to use "your white voice" is one example and the unexpectedly opening garage door. This movie is also evocative of "Brazil". I don't know how many times I could rewatch without it losing some of its charms, but definitely a couple more times.
5 people found this helpful
See all reviews
Back to top
Get to Know Us
Make Money with Us
Amazon Payment Products
Let Us Help You
EnglishChoose a language for shopping. United StatesChoose a country/region for shopping.
© 1996-2021, Amazon.com, Inc. or its affiliates