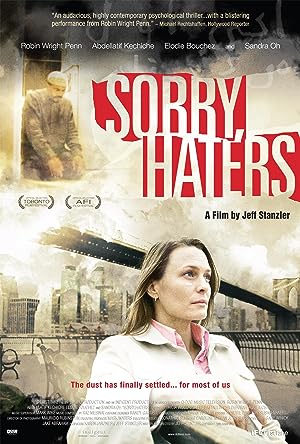 Denise PReviewed in the United States on March 15, 2007
5.0 out of 5 stars
Great film, unpredictable and alarming
Verified purchase
Great film, unpredictable and alarming
I love and own this movie but you may feel repulsed by Robin Wright Penn's character, Phoebe. This film is psychological drama. Miss Penn plays a highly disturbed single, jealous, manipulative individual living in New York City.

Penn's character hides these traits with a mousey, shy and indifferent demeanor. But wait, her personality is ever changing. From the beginning of the film you're trying to figure her character out along with an innocent taxi driver, played by Abdel Kechiche.

Some feel Robin's character became ill because of 911, I think she was already sick prior to the event and uses it to feed her psychosis. However you may interpret this movie you won't forget the alarming brutality of this film.

Robin Write Penn gives a riveting performance that sends you spinning with her changing personality.
Abdel Kechiche character, Ashade's life is victimized to the point of no return.
Unbelievable.........

RohanReviewed in the United States on May 18, 2014
5.0 out of 5 stars
Haunting
Verified purchase
This film lives up to its off beat title and cover. She is deeply disturbing character who is the kind of person you might think is insane and devious, and indeed, she really is. Unfortunately, there are real people like this. Penn plays it well, a troubled woman who gets some relief from cutting herself and bringing harm and chaos to others lives. Well done, but expect to not really like it, rather, one respects it.
2 people found this helpful

storkslmiaReviewed in the United States on December 20, 2015
5.0 out of 5 stars
Robin Wright is Excellent in this Indie Film...
Verified purchase
I saw this on Indie TV channel a while back and wow! what a thriller. I love Robin Wright, always have, and she gives an outstanding performance in this dark thriller. I had to buy it! A great film!
One person found this helpful

P. KruegerReviewed in the United States on January 4, 2007
5.0 out of 5 stars
Spellbinding.
Verified purchase
Perhaps the subtext in this movie is easy to miss but for those who it hits, it's a sure K. O. The power of the pitch perfect performances aside, the real news comes in the discovery of the fact that a self-hater can find gain, personal power and advantage in the presence of chaos and catastrophe. They are served when the playing field of those whom they envy becomes leveled by chaos. The anti hero played by Robin Wright Penn is the definitive portrait of this dark side of the revolutionary spirit, finding her strength in performing acts of terror.

"Sorry Haters" leads, teases, surprises and constantly challenges the audiences belief about it's central character. I was on the edge of my seat from title to credits. I can't say enough about this movie.

...Reviewed in the United States on October 19, 2007
4.0 out of 5 stars
Kelly Capwell, You ROCK
Verified purchase
Haha, this is not a pleasant movie to sit through but it boggles my mind how the filmmaker captured a very important type of "New Yorker." I also once again am startled by Sandra Oh. I've seen her in that Chinese Canadian movie, Dancing at the Blue Iguana, Hard Candy and this movie and for some reason, I feel like Sandra Oh's gaze is reaching out of the tv screen and touching my face. She's scary smart and I feel her strength in a movie even when her role is not a large one.

I think Robin Wright is a really interesting actress and a really impressive physical presence. I think she's kind of sneaky in what she is doing but this is not a good movie to stare at her and ponder what the actor is doing to us because I feel that if I look too hard at what she is doing, I will be singed.
One person found this helpful

Chance RobinsonReviewed in the United States on October 8, 2015
2.0 out of 5 stars
Two Stars
Verified purchase
Did my wife buy this?

BryanReviewed in the United States on February 27, 2012
3.0 out of 5 stars
sorry... didn't hate it but didn't like it either
Sorry, Haters is a really twisted take on the rocky relationship between the Americans and Muslims. Before writing my review let me state that I probably didn't get the movie overall. At least, the second half totally went over my head.

What initially appears to be an American woman out for revenge with a short-sighted attitude problem and demanding that a Muslim cab driver take her wherever she desires to go (and willing to pay the guy a large sum of money to make it possible) we soon discover that the storyline is much deeper than that. Eventually the Muslim takes a temporary stop at a house with a woman and small child, and the woman comes with him, basically invites herself in, and they communicate about how terrible the United States is. We learn the woman and child are the family of the cab drivers brother.

Eventually the discussion concerning the brother becomes an important aspect of the storyline and the woman tries to rationalize by carrying a decent conversation over what should be done about freeing the cab drivers brother, but... well for one thing we never see the brother. It's all talk. Second of all, the storyline changes into a different and WAY more confusing direction just as soon as we discover the woman snuck her way through the Muslims belongings and somehow took 500 bucks from the guy. Actually right before this it would seem the woman set up a perfect trap so the Muslim couldn't escape at the top of a building after locking him up there with nowhere to go, but she -much to MY surprise at least- ends up giving him the door password, lets him run free, and then he's seen on the streets running from the security guards. From here on out, the discussion over the brother is pushed aside (unless I missed something).

Now the storyline turns *much* worse as the communication between the woman and the Muslim is never really fully understood until the very end, and even THEN I'm not sure what to make of it other than the woman has psychotic tendencies and had the Muslim guy completely under her spell the entire time. I don't want to give away what happens at the *very* end though- two surprises actually, both of which are major and inappropriate to spoil for the readers.

Overall, well just understand that the woman has mental issues and she's not capable of rationalizing and sympathizing like a normal human being and perhaps THEN the storyline will make better sense. Otherwise the acting is decent, and it's a pretty decent film overall. No it's not a typical "Americans vs. Muslims" type of storyline, but that doesn't excuse the confusion mainly thanks to the woman who plays the lead character. Again, we'll just assume it's the woman who's at fault the entire time and is actually the bad person, and that's the twist the movie writers were going for. During a time when the average American didn't know how to approach the Muslim community, the film writers wanted to take the issue from a different angle and offer surprising twists and turns. I believe this is the case with Sorry, Haters. The only problem is, again, the confusing way the story is told.
One person found this helpful

C. CRADDOCKReviewed in the United States on May 8, 2010
3.0 out of 5 stars
Sorry, Philly; sorry, Ashade; sorry, Chelsea
A Syrian cab driver is trying to help his brother who has been rendered back to Syria by the CIA, where he will undoubtedly face torture. We will presume him to be innocent, but the cab driver is certain he is innocent and only wants to help his brother. He doesn't hate America in spite of what has happened.

A woman gets into his cab, clearly upset about her own personal issues. She asks to be driven downtown and has the cab driver park outside a house where she cries when she sees a man, woman, and child arriving home. She keys the car, and then shows the cab driver a picture of the man, woman, and child, with herself. She says she is a producer of Reality TV Shows, like "Sorry, Haters," a show that displays the lavish lifestyles of rappers to induce envy in viewers. Her husband is an artist, and the woman is their nanny; but she and her husband are estranged, and he is now with the nanny.

The cab driver is anxious to get home, as he needs to bring some money to his brother's wife. She is not ready to go home. He will drive her around, but needs to make a quick stop. As he is talking to his brother's wife, she barges in and intrudes on their life. On hearing about his brother's plight, she offers to try to get him a lawyer, but instead she steals the money he has saved to help him. His situation goes from bad to worse. He goes back to her office to find out why she pretended to want to help him, but then went about trying to destroy him.

The film doesn't really answer this riddle, but we do learn that Phoebe was not really who she said she was. She has more baggage than a sky cap the day before Thanksgiving. The tag for this film was: The dust has finally settled... for most of us. It delves into the anxieties and fears we have in a post 9/11 America, and also tackles the equally perplexing problems of loneliness, alienation, and mental illness. The film seems prescient about certain events like the arrest of Jihad Jane.

This indie film was shot in 15 days and takes on many complex and troubling issues. It doesn't really attempt to answer any of the questions it raises, but it does make you think about them. This film is not for everyone. It eschews the happy ending. Does it ever. Robin Penn Wright gives an incredible performance. She has come a long way since Princess Buttercup in The Princess Bride.