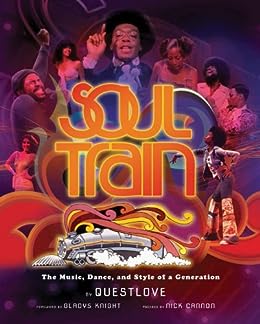 Soul Train: The Music, Dance, and Style of a Generation Kindle Edition

by Questlove (Author) Format: Kindle Edition
See all formats and editions
Sorry, there was a problem loading this page. Try again.

From Ahmir "Questlove" Thompson of the award-winning hip-hop group the Roots, comes this vibrant book commemorating the legacy of Soul Train—the cultural phenomenon that launched the careers of artists such as Tina Turner, Stevie Wonder, the Jackson 5, Whitney Houston, Lenny Kravitz, LL Cool J, and Aretha Franklin. Questlove reveals the remarkable story of the captivating program, and his text is paired with more than 350 photographs of the show's most memorable episodes and the larger-than-life characters who defined it: the great host Don Cornelius, the extraordinary musicians, and the people who lived the phenomenon from dance floor. Gladys Knight contributed a foreword to this incredible volume. Nick Cannon contributed the preface.

With its smooth, soulful tunes and groovy dance moves, Soul Train launched the careers of countless African American artists and set lasting trends in music, dance, and fashion for more than three decades. To create this unparalleled tribute to the show, Questlove, the brilliant frontman for the Roots, has pored through more than 1,100 episodes of the show and been given exclusive access to its archives to present hundreds of never-before-seen photographs and the riveting, unfiltered story of how Don Cornelius revolutionized black entertainment.

In this incredible volume, Questlove takes you on a journey from the show's conception and first episode in 1971 to Don's final episode as host in 1993. You will learn how all-star performers such as Ike and Tina Turner, Marvin Gaye, Michael Jackson, Stevie Wonder, Elton John, Whitney Houston, David Bowie, Aretha Franklin, LL Cool J, Lenny Kravitz, the Beastie Boys, and Mariah Carey, to name a few, got their start, and get an up-close look at the show's most memorable dancers, and the moves and fashion they popularized.

Soul Train was the longest-running syndicated program in television history. It was beloved by generations of youth, like Questlove, who eagerly awaited every episode, and young music lovers are still discovering it today. It's taken more than forty years for the awesome legacy of Soul Train to be celebrated in a proper way, and this book does just that.

Questlove is a drummer, DJ, producer, culinary entrepreneur, designer, New York Times bestselling and James Beard Award–nominated author, and cofounder of Philadelphia’s most influential hip-hop group, the Roots. He is the musical director for The Tonight Show Starring Jimmy Fallon, where the Roots serve as the house band, and a four-time Grammy Award–winning musician. He is also an adjunct professor at the NYU Tisch School of the Arts.

B. C.
5.0 out of 5 stars Great book!
Reviewed in the United States 🇺🇸 on October 25, 2013
Verified Purchase
This book was worth the wait and well put together. I enjoyed reading it and looking at all of the pictures. This book has information on Don Cornelius and the artists, dancers, and others who have been involved with Soul Train. The typographical errors are minimal.(That appears to be Bunny Sigler on page 98, not Joe Tex, with Damita Jo Freeman.)This does not take away from the overall layout of the book, which is pleasing to look at. It does a great job with just focusing on the history of the show as it relates to music and culture, which helps to highlight how Soul Train has broken many barriers in television and in music. The only thing that I question is the lack of information about the later years of first-run Soul Train episodes (1993-2006). Then again, Questlove probably wanted to keep this a positive book about Soul Train. Good job, Questlove!
Read more
14 people found this helpful
Helpful
Report abuse

CC
4.0 out of 5 stars Book cover arrived damaged but still great coffee table book
Reviewed in the United States 🇺🇸 on June 17, 2016
Verified Purchase
Got this for my husband, he will love it. Minus one star for ripped book cover. I *think* this was supposed to be a new book (paid $30 for it from Brothers Vintage Toys and Collectibles) but cover is quite damaged. Not a deal breaker, since we don't typically keep the sleeve but this one had a cool cover to it, so we would have.

We love Soul Train and this will be a great coffee table book.

Kayjay
5.0 out of 5 stars Great Memories of a Beautiful Musical Era
Reviewed in the United States 🇺🇸 on December 12, 2014
Verified Purchase
I absolutely love this book. It was so well-done!

The photographs are awesome. The book shows how many different and unique artists graced the Soul Train stage. Plus, I loved that the dancers were featured as well. It was great learning many of their names and a little bit about their journey on Soul Train. This book also did a wonderful job showing how the show evolved through the years and how each decade of the show was unique.

I am so glad to have this book in my collection. It brings back such good memories of real artistry and great dancing. There will never be another Soul Train. I highly recommend this book!
Read more
One person found this helpful
Helpful
Report abuse

Amazon Customer
5.0 out of 5 stars What a iconic piece of history for black Americans.
Reviewed in the United States 🇺🇸 on October 25, 2019
Verified Purchase
I loved, loved the whole artist background information shared about each group that appeared on Soul Train and their relationship with Don Cornelius.
Read more
Helpful
Report abuse

Deanna
5.0 out of 5 stars Great Memories
Reviewed in the United States 🇺🇸 on March 11, 2014
Verified Purchase
I love everything about the influence that Soul Train had on the world. The history behind it. The talent that appeared on the show. Everything. Questlove does a fantastic job of capturing all of that in such a way that feels like a walk down memory lane. If you even just caught only a few episodes of Soul Train previously, you should still get this book. It will open your eyes to the history that is the great Soul Train.
Read more
5 people found this helpful
Helpful
Report abuse

Lori
5.0 out of 5 stars Questlove is a Genius (in case you didn't know that already)
Reviewed in the United States 🇺🇸 on September 11, 2018
Verified Purchase
This brought back so many memories...I appreciate the time, work, and love that Questlove put into gathering and archiving this info for posterity. Lots of behind-the-scenes stories and historical perspective, this book is a rare gem.
Read more
2 people found this helpful
Helpful
Report abuse

delaineg
5.0 out of 5 stars Soul Train: The Music, Dance, and Style of a Generation
Reviewed in the United States 🇺🇸 on June 18, 2014
Verified Purchase
What a beautiful book! The pictures in it are wonderful! It makes a lovely coffee table book and a great conversation piece. It brings back a lot of memories of being young loving the music and dancing and dressing well. I like looking at all of the young ladies various hairstyles, etc. This book is priced just right for what you get, and makes a great addition to ones' library. I do recommend.
Read more
One person found this helpful
Helpful
Report abuse

missy
5.0 out of 5 stars Memories
Reviewed in the United States 🇺🇸 on April 2, 2014
Verified Purchase
This book brought back memories when I was a little girl watching this show every Saturday. I enjoyed reading most about the dancers, now that I know their names. I only thing I don't like about the book is that, it should have been proofread very carefully. There was a picture of Kool Moe Dee but it had another artist name underneath. I recommend this book to everyone who is a fan of Soul Train.
Read more
6 people found this helpful
Helpful
Report abuse
See all reviews

Roberto M
5.0 out of 5 stars Awesome book...the document of an era.
Reviewed in the United Kingdom 🇬🇧 on May 30, 2016
Verified Purchase
Awesome book. I have been a fan of the Soul Train TV Program and have bought related CD's and the DVD with some extracts and best of performances and if you are into 70's culture, funk, dance, disco, pop or R&B, you will really appreciate this book. Very posh with fantastic photos of excellent quality. What you pay is nothing compared to the pleasure you experience when navigating the big format photos in the book, more than a book to me it is a document.

All 70's, 80's and 90's artist are here included in unique photos nowhere else available. You can also see how some artist progressed in their styles and fashion. The program run from 1971 until 2006 and the book covers to a bigger extension the time the program was conducted by the famous creator Don Cornelius. The book helps to understand the big contribution African-Americans did to the American and the world culture in terms of music, creativity and fashion.
Read more
Report abuse

Rob the Greek
4.0 out of 5 stars Four Stars
Reviewed in the United Kingdom 🇬🇧 on November 3, 2014
Verified Purchase
seemed to take ages to arrive but was within the time frame
Read more
Report abuse