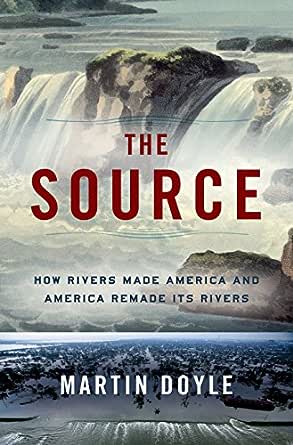 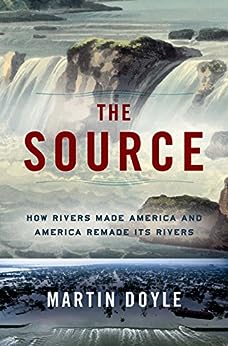 The Source: How Rivers Made America and America Remade Its Rivers Kindle Edition

“Original [and] poignant. . . . [T]ells the story of how rivers have shaped the United States from its founding.”
- Robert Glennon, New York Times Book Review

“An original and thought-provoking exploration of the sinuous course that water has carved through our economic and political landscape.”
- Gerard Helferich, Wall Street Journal

“In [Doyle’s] telling, rivers become a lens on federalism, energy and conservation―a rolling narrative taking us from George Washington's quest to find a passage from the Atlantic Ocean to the Ohio River, through decades of levee-building, flood control, water wars and much more.”
- Nature

“Authoritative…Even readers with an allergy to learning history will come away with a greater understanding of how rivers have literally made our country.”
- Tracy Ross, Outside Magazine

“A vigorous look at American history through the nation’s waterways…Doyle speaks well to issues that are as pressing today as in the first years of the republic.”
- Kirkus Reviews

“Readers interested in everything from American history to business, engineering, environmental concerns, and canoeing will find Doyle’s work absorbing and educational.”
- Booklist

“Just like its topic, The Source flows magnificently from end to end, carving out a story that spans a continent and several centuries. Martin Doyle weaves together a gripping mix of American history, geology, engineering, economics, and politics to show that American rivers are one of the inspirations of the constitution, the connective fabric of our industry, a triggering cause of environmental movements, and a source of power―physical, economic, and political.”
- Michael E. Webber, author of Thirst for Power

“Brilliantly conceived, The Source is a unique synthesis that recasts American history and flows with the power of unexpected insight.”
- David R. Montgomery, author of Growing A Revolution

“Move over Cadillac Desert and The Last Oasis; a new classic on American rivers has arrived. One of the world’s leading authorities on hydrology, Martin Doyle shows how rivers have served as the arteries and veins of the United States since the country’s very founding. It is a rich history both impressive and unsettling.”
- James Salzman, author of Drinking Water: A History --This text refers to the hardcover edition.

Martin Doyle is director of the Water Policy Program at the Nicholas Institute for Environmental Policy Solutions and a professor of river science and policy at Duke University’s Nicholas School of the Environment. He lives in North Carolina. --This text refers to the hardcover edition.

4.7 out of 5 stars
4.7 out of 5
41 customer ratings
How does Amazon calculate star ratings?
Amazon calculates a product’s star ratings based on a machine learned model instead of a raw data average. The model takes into account factors including the age of a rating, whether the ratings are from verified purchasers, and factors that establish reviewer trustworthiness.
Top reviews

Frederick S. Goethel
VINE VOICE
5.0 out of 5 stars The History Of A Country Founded On Rivers
Reviewed in the United States on May 25, 2018
Verified Purchase
Rivers are what made the United States what it is and this book explores how rivers and streams have shaped our history and made the expansion of the country possible.

The author starts by examining the eastern river systems. Most didn't go very far inland, and while great for use as power for grist mills, they were not good for transportation. Then the idea of the Erie Canal came to be and it changed the depth of the country and how good were transported to market.

The author then looks at what we have done to harness rivers for navigation and to prevent flooding. Levees were built, rivers were straightened and depth increased to allow more river traffic. The best example is, of course the Mississippi River, which has become a backbone of American transportation.

The book is a fascinating read into an aspect of American history that has received little attention. We would not be the country we are without our river systems, and this book details that well. It is very readable and completely enjoyable.
Read more
20 people found this helpful
Helpful
Comment Report abuse

Timothy J. Foss
4.0 out of 5 stars Not quite what I expected
Reviewed in the United States on February 6, 2019
Verified Purchase
Given the book's title I was expecting more technical information; i.e. how were America's rivers developed/modified for our usage? Rather this is more of the philosophy of how we use our rivers and (especially for western rivers whose flows are rationed out) who has priority of water usage. Still it's well written, researched and interesting. For instance you have multiple entities wanting to use water from the river for irrigation: 1)the furthest upstream tenant, 2)the downstream tenant who has longer occupancy or seniority, and 3)Native Americans. During times of drought and the river can't supply all their needs, who gets theirs first? Certainly a worthwhile read for those interested in America's rivers.
Read more
10 people found this helpful
Helpful
Comment Report abuse

Amazon Customer
5.0 out of 5 stars Should be required reading for high school seniors/college freshmen
Reviewed in the United States on September 16, 2018
Verified Purchase
A really excellent book. It covers a vast amount of what might be termed civics/economics/US history from the perspective of America's waterways. Seems to be well researched by someone who has a pretty deep and broad understanding of the material. Very readable for the general public- no cheap joke-iness but has a lightness to it that makes it easily read, even by septuagenarians like me. Haven't quite finished it yet, but am really glad to have discovered it. In a perfect world, high schools could build an entire semester's study around this book.
Read more
9 people found this helpful
Helpful
Comment Report abuse

TexasMike
5.0 out of 5 stars Great Book on Water!
Reviewed in the United States on August 9, 2018
Verified Purchase
A good non fiction "business" book typically covers just a couple of interesting areas or makes a handful of points; The Source covered many more areas than usual (all water-related), and in a very readable fashion. It's great to learn about the history of several "businesses" while also being entertained. One of the best non-fiction books I've read this year.
Read more
9 people found this helpful
Helpful
Comment Report abuse

tjw
5.0 out of 5 stars Fabulous!!! Highly Recommend
Reviewed in the United States on March 21, 2019
Verified Purchase
The Source is fabulous! It’s dense, authoritative, well-researched & well-referenced.
For me, it was a slow read - because it is filled with thought-provoking information & insights.
Rivers have shaped the basic facts of America - where we live, how we conduct business, how we deal with risks, and how we govern ourselves.
By this great work, Martin Doyle (author) provides a thorough history of the central role Rivers have played in our local/national development. He informs us how vital (despite being taken for granted & oft-abused) Rivers are to our future.
For anyone wishing to better understand issues of American Environment, Government, and History - this seems a “must read”.
Fabulous job, Mister Doyle!!
Read more
2 people found this helpful
Helpful
Comment Report abuse

Wanderer
5.0 out of 5 stars Well written and researched
Reviewed in the United States on January 31, 2020
Verified Purchase
From the Erie Canal to credit default swaps all while focusing on America's rivers, is an indication of the sweep of this book. It is a fascinating and interesting narrative covering history, politics, economics as well as geography, science, and natural history. It is well written and researched. No one point of view, or political position is championed over another. Instead, each is carefully presented in a way to provide the information for the reader to make their own decision.
Read more
2 people found this helpful
Helpful
Comment Report abuse

Bama Fan
5.0 out of 5 stars More than just rivers!
Reviewed in the United States on June 9, 2020
Verified Purchase
This book was a fun read as it talked about how rivers shaped the economy of the US early on, but it also provided some background as to how different government institutions were created and shaped by the rivers or by diverting rivers. There were a lot of tidbits that were surprising and fascinating about how different systems are set up to utilize rivers for commerce, energy and entertainment and how different projects were constructed or funded. Highly recommend for people who are curious about rivers or about the formation of different government entities!
Read more
Helpful
Comment Report abuse
See all reviews from the United States