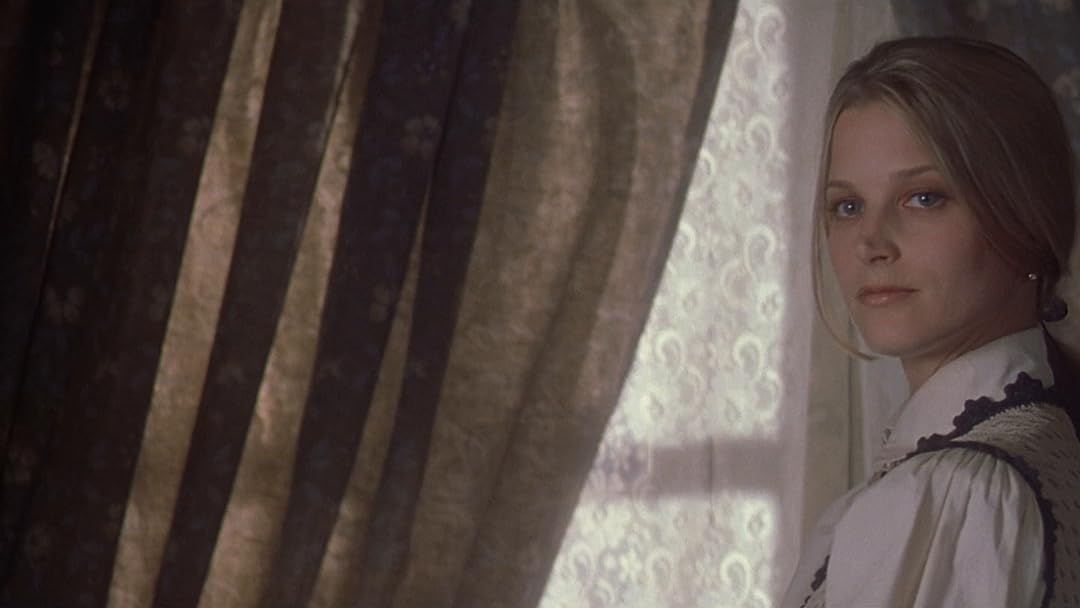 South Of Heaven, West Of Hell

(234)
4.12 h 12 min2000R
A small-town marshal, tormented by the puzzling conditions that surround him, is forced to confront his demons at an unexpected and untraditional "family reunion".

Joseph MurphyReviewed in the United States on November 14, 2021
3.0 out of 5 stars
Huh, what am I watching!
Verified purchase
Except for the action sequences (which were very well staged) I haven't a clue what was really going on. I lost interest after the shoot out with a machine gun on an empty bank and not killing the sheriff (Yokum) was beyond belief. Everything after this made no sense and I am getting a headache just thinking about it to write this review; I would have been better off watching paint dry. Terrible waste of talent and money.

TXRed75Reviewed in the United States on March 21, 2014
4.0 out of 5 stars
Interesting
Verified purchase
I'm a pretty big Dwight Yoakam fan so I like this movie. If you've seen his videos or other movies you know he's kind of weird and this film is no exception. There's a few parts that are bit drawn out and downright boring but the characters, especially the antagonists, completely make up for it. The drawn out parts is what drops this movie a star for me.

Vince Vaughan, the main antagonist is pretty funny but for me my favorite character was Nogales, played by Joe Unger. He is very crude and the parts he is in are hilarious. It's actually why I bought the movie. The movie also features Paul Reubens, aka, Pee Wee Herman, Terry McIlvain, as Dwight's sidekick, known to me as the goofy brother in Pure Country. His character wears a dress. Bigger stars Peter Fonda, Bridget Fonda and Billy Bob Thorton make brief appearances.

As far as a western it is unlike any western you have ever seen. Unlike the Man with No Name, every one is a terrible shot. It's probably actually pretty realistic, I mean who can shoot a man in the gut in an elevated position at 100 yards shooting a pistol from the hip.

If you are a fan of Dwight Yoakam or just like seeing strange stuff in movies then I would recommend. If you like Westerns where the hero shoots with the accuracy of RoboCop and kills everyone in one shot and never fires a stray bullet, then watch the Good, the Bad, and the Ugly.

Kathy ColemanReviewed in the United States on September 3, 2001
5.0 out of 5 stars
Not Your Standard Western Fare
Verified purchase
Dwight Yoakam's "South of Heaven, West of Hell" is not a standard western. Honestly, it's only a western at all due to the time and place in which it's set, or at least, the time and place in which it appears to be set.
Anyone who goes into this movie with pre-conceived notions has to stop and throw them out right now. You also have to be prepared to really, really think. Dwight Yoakam may be best-known for being a hillbilly singer, but there's a rather shockingly deep brain hiding beneath that low-brimmed cowboy hat, and lurking inside that brain is a strange, esoteric, and truly bizarre story about death and what may, or may not, happen afterward.
As the story opens, we find Valentine Casey, the sheriff of the small western town of Los Tragos. The town is terrorized by a bloodthirsty mob of thieves who turn out to be Val's adopted family, the murderous Henrys. Sound like a standard western? Perhaps. But then we jump ahead a few years to find that the government is searching anxiously for Val, or Val's family, to deliver something important. Val is still seeking the Henrys, but appears to now be working as a horse trainer with his bizarre little deputy, U.S. Christmas, while he searches. Eventually, he will find the Henrys, and his search for justice will end.
That Val is haunted by the ghosts of his past is evident; what else haunts him, the landscape, and all the people who surround him, is not so immediately apparent. That Val himself may be a ghost is, perhaps, the most important facet of the story. Is Val a ghost who cannot stop going until he has completed his task? Or are they all ghosts, searching in vain for a way to finish their lives, accomplish a necessary goal, or are they merely trapped, forced to inhabit this bleak landscape for all eternity without finding redemption at all? If redemption does indeed exist for Val, perhaps he can find it by defeating the Henrys; or does his redemption exist in the beautiful Adelyne, who herself is struggling to accomplish HER post-life goal?
For me, one of the most intriguing pieces of this film was trying to make the decision whether Valentine Casey died in the Spanish-American war, as a hero in Cuba, or did he die in the disastrous, bloody massacre in Los Tragos? Has he convinced himself that the heroic death was his, to salve his pain over his failure in Los Tragos? Val is haunted by scents -- the smell of gunpowder, notably, but he also always tries to smell burning chili peppers -- as, we are told, the sense of smell leaves you in death, and all you retain are the scents that surrounded you when you died. So does Val really smell the burning chilis, meaning he died a hero in Cuba? Or is he simply trying to add that scent to the gunpowder that marked his death and subsequent failure in Los Tragos?
It's a very intriguing film. It is also beautifully shot, marking some very, very fine cinematography. I was pleasantly surprised by Dwight Yoakam as a director. The mood is set early, and scenes flow remarkably well together. It is a very long movie, which unfortunately audiences were not ready for, so it is an absolute MUST to see the DVD edition to understand the film -- the VHS edition is cut down by almost 40 minutes of necessary footage. It's also a very dark film, and darkly humorous. The bits of black comedy are all the more startling for the way they scattershot through the story--surprise, there's a laugh hidden there! It's also vitally important to actually watch this film. I'm very sorry that it never played theatres in this area so I never got the opportunity to see it on the big screen.
One of my favorite scenes contains Billy Bob Thornton as Brigadeer Smalls -- a very small, but extremely pivotal role, whose words must be listened to -- Smalls is the key, all Val has to do is listen to unlock his own mystery. And no one but a great character player like Billy Bob could deliver those lines.
By all means, if you're looking for a little light action, don't choose this film. But if you like a movie that makes you think, and question, and ponder, then you may like this as much as I did.
10 people found this helpful

Merrilee BurokerReviewed in the United States on November 11, 2015
4.0 out of 5 stars
If you love Dwight Yoakam
Verified purchase
If you love Dwight Yoakam, you need to have this in your collection. If you're looking for a great Western, maybe not so much. I especially enjoyed Dwight's voice-over commentary in the Special Features section, as it explains more what he was trying to achieve with this project. I think he was trying to do a Peckinpah Wild Bunch type movie, and I am not a big Peckinpah fan. I think he was trying to explore a quirky, kind of "hey, maybe all the main characters are really dead" kind of theme, but somehow it comes across as merely confusing. Still, Dwight looks mighty good on a horse, so for me, that makes it all worth while.
4 people found this helpful

Larry GilstrapReviewed in the United States on May 8, 2011
5.0 out of 5 stars
Gritty, yet engaging
Verified purchase
In these times, when "they just don't make westerns like they used to", Dwight Yokum came up with this improbable gem. With an interesting cast of proven talent, Yokum stands the genre on its ear with an odd after-death nether-world where the good guys and bad guys seem to end up in the same town.

There is more than a little camp involved, and I marveled at how the cast was able to keep their composure. That being said, there is enough serious food for thought as the recently departed get to work out their unresolved issues in the dusty hereafter.

To make this movie even more interesting, the grittiness of the film lends a believable authenticity, and the music give it the somewhat melancholic longing which seems to typify existence away from urban distraction or vistas of tropical paradise.
3 people found this helpful

Patricia GardnerReviewed in the United States on September 2, 2017
3.0 out of 5 stars
Interesting flick
Verified purchase
Interesting movie. The story has potential but there are too many unanswered . . . mysteries (for lack of a better term) and the movie lacks something that I can't describe, can't quite put my finger on. The biggest downfall is the acting and, interestingly, Yoakam isn't the weak link. In fact, I'd say he gave the best performance in the movie. Maybe because he knew what he wanted the movie to be? Not sure but, he's actually a good actor and seemed natural, comfortable, in the role. I liked the sparse score, it fit. Like I said, it was interesting.

John C. Parker, Jr.Reviewed in the United States on November 1, 2015
5.0 out of 5 stars
Watch it, then decide if you liked it
Verified purchase
This is a different kind of western. The "good guys" don't shoot the bad guys with the first shoot as most western movie show them. Instead, there are many missed shots. Most reviews either hate the movie or really like it. I liked it, even the deputy wearing the skirt. It seems folks were a little quirky even in the 1908 west, as some of us are now. If nothing else, it shows that people in the west were really free to live as they pleased then. All in all, I highly recommend this movie because it is different from the run of the mill western movie.
One person found this helpful

Karen PhelanReviewed in the United States on April 13, 2015
5.0 out of 5 stars
Trippy and Entertaining Flick - Watch if for Pee Wee Herman's Role Alone!!!
Verified purchase
If it weren't for all the blood and guts in this movie, it would be fully hysterical. The characters are twisted and border on comical while trying so hard to be serious. I LOVED this movie as it's just soooo trippy. Vince Vaughn in a hateful role but pulls it off great. Dwight is entertaining but the REAL treat is PEE WEE HERMAN in a serious role. The first time I watched this movie, I missed his name in the opening credits. But at the end when I watched the credits again, I saw his name and HAD to REWIND to find him! He ACED it and you had NO IDEA it was Pee Wee Herman! Watch it for his performance if nothing else!
See all reviews
Back to top
Get to Know Us
Make Money with Us
Amazon Payment Products
Let Us Help You
EnglishChoose a language for shopping. United StatesChoose a country/region for shopping.
© 1996-2022, Amazon.com, Inc. or its affiliates