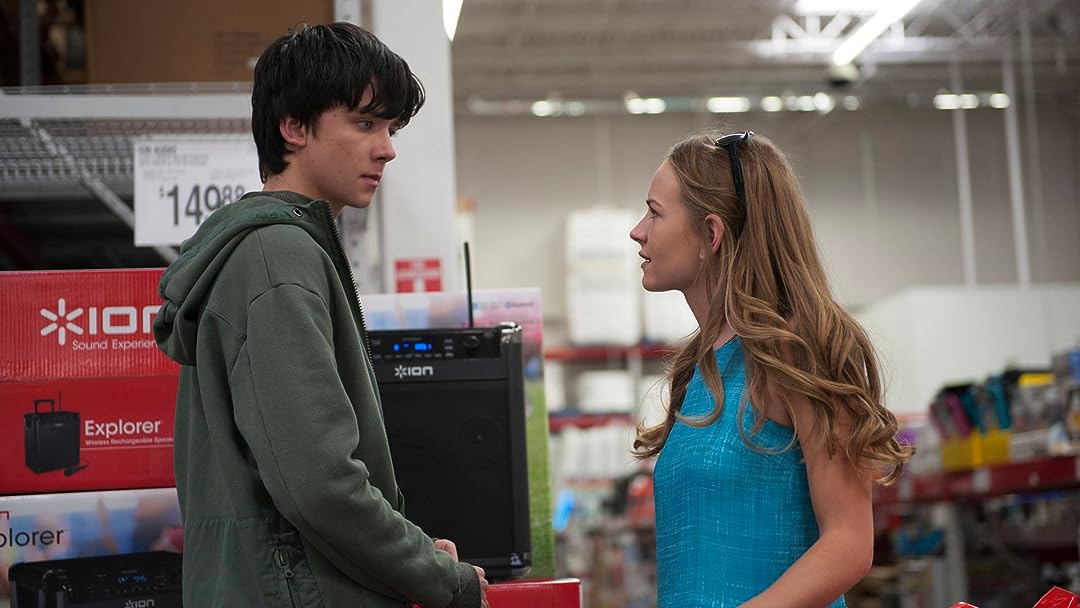 The Space Between Us

(1,362)
6.42h2017X-RayPG-13
The first human born on Mars travels to Earth for the first time, experiencing the wonders of the planet through fresh eyes.

Novel ReaderReviewed in the United States on August 20, 2022
5.0 out of 5 stars
Good, fun, adventure movie!!
Verified purchase
I have enjoyed this movie several times! The main characters are played by Asa Butterfield and Britt Robertson, who are excellent young actors. The story line is pure fantasy, of course, but it is a kind, gentle story. It is a movie that I can watch over and over across time when I want to be entertained without a shoot-em up or dead body.

KatKReviewed in the United States on September 13, 2021
5.0 out of 5 stars
totally sweet love story
Verified purchase
As the main character asked many people, "what's your favorite thing about Earth?" it got me thinking about what is MY favorite thing about Earth. I'll let you know when I have an answer. It was joyful seeing the world through his eyes though, reminds me not to take things for granted, simple things like rain, a road trip, a hike up a mountain, etc. Don't let the "sci-fi" aspect of this movie turn you away, in fact, it's really not science fiction at all. Ok its several years in the future when science has excelled enough to get humans to Mars. But really it's just a cute sweet love story between two impulsive teens that make each others lives better. The baby daddy was obvious from the very start I must say. A nice plot, good acting, beautiful scenes, it's worth your time for a wholesome movie.

Edward W. DuveyoungReviewed in the United States on May 2, 2017
5.0 out of 5 stars
A solid bit of story telling
Verified purchase
Oh I could complain; there's more than one bother. But the positives abound. The story was strangely engaging despite it being so trite. Hope the hinted sequel happens.

And WHOA!....a day later and no other reviews here yet? What?

It's everything the trailer promises and a bit more. A must see for any fan of space or SciFi films. The romance works. There's very nicely sussed out characters -- all of whom are walking tightropes in their inner realms and we feel their struggles. Don't ask me to diss the film's weak spots....I like this film and I just don't care if I'm investing in a bias towards it.

2nd viewing the very next night. As an experiment, I watched again to see what entertainment values could suffer my remembering so much. There were a lot of tidbits firstly seen this time, and some relationship fuzzies got more sharply etched. The ending became a bit more probable to me. CGI and comicbook editing and story condensing really do carry the viewer along. 2nd viewing makes for forgiving a few of the bothers. Future me -- probably you can enjoy this again even as soon as a month from now, but hold out as long as you can. Bet you don't make it passed 9-23-17 at the latest.

6-15-17 3rd viewing was shortened...I watched it from his arrival on Earth.....still got my tears flowing. Sue me. Some of the parts are a bother, but who cares?...this isn't a space movie...it's a soap opera with rocketry well on the side. Wish it were more like the Martian, but yeah, sure, I'll take Mars no matter how it's served up.

James F GrahamReviewed in the United States on March 24, 2022
5.0 out of 5 stars
best movie
Verified purchase
This is by far my favorite movie of all time. I've seen it at least 10 times minimum and would stil watch it any day. Asa Butterfield plays Gardener perfectly!The way the movie was written still amazes me to this day and I would watch this any chance I get!

molzamiReviewed in the United States on May 9, 2017
4.0 out of 5 stars
Good story, good acting but lots of "how do you explain that" scenes
Verified purchase
I love the story, very fun. It is an overall good production, but there were quite a few scenes that didn't make sense. I am truly not one that usually notices these things as i get too caught up in the story. Some of the scenes, i guess, could be explained away, but here are two that i just can't get passed (warning, spoilers ahead).
1. so the helicopter was chasing the plane, had them on radar and saw the fire on radar after the crash. How on earth did the NASA response trucks and investigators get to the scene so far in advance of the chopper that they were able to confirm no body's found on arrival... seems that the chopper would have been first to the scene. The events just seem so out of sequence

2. At the end the Astronauts going to Mars are in a sealed tunnel through the building, yet they come out in the air to use an unsealed staiway to an unsealed elevator up to the rocket?!? and were close enough to other people that Gardner could talk to Tulsa?!?, so shy were they in a sealed hallway in the first place?

It really seems that they could have done something to make these scenes a little more plausible.

but again, a generally entertaining movie.
4 people found this helpful

Robert 'Robbie' BarthelReviewed in the United States on November 25, 2017
3.0 out of 5 stars
A decent movie
Verified purchase
I rented this movie because I saw the trailer and thought it was an amazing story. I never got the chance to see it in theaters, so when it crossed my mind the other day I thought I would rent it. Overall I thought the movie was pretty good. I thought the beginning was a bit rushed, but given all the things that were supposed to happen to the main character, I suppose it had to be quick. The movie did a decent job portraying the characters, though I felt that blatantly calling Gardner a romantic was poor for the movie. I was also a bit surprised by the desert sex scene. Granted nothing was shown, but to me it felt a little out of place. Sort of pushed the romance idea a little bit too far. However, they are teenagers, and things happen. I loved it when they found out who is actual father was. It was such a surprise, but to tell you the truth, it was a bit of a stretch to have Gardner be the one to find out before everyone else. A few other minor details were wrong in regards to real life: like her ultrasound. A baby is not that developed at only 2 or so months, but given that many people in the audience do not know that and they need to make it obvious what is going on, I understood why they decided to show it as they did. Overall the movie was pretty good. I am glad I finally watched it but I am glad that I did not buy it. I will probably watch it again in the future, but I have no reason to own it.

Rev. C .DraegerReviewed in the United States on February 23, 2022
5.0 out of 5 stars
Nice family movie
Verified purchase
This is a nice family movie that everyone can enjoy. However the box it came in was kind of smashed. The movie itself was intact.

MaeReviewed in the United States on May 20, 2017
4.0 out of 5 stars
It was a fun movie (at least in concept) if not completely realistic.
Verified purchase
This movie was really fun to watch, but there were some really unrealistic parts that really were completely unnecessary.
I really did enjoy the story though. It was more original than a lot of sci-fi movies.

I just have to say that the part at the end where they are in the shuttle thingy is ridiculous because the g-forces would be so much stronger than earth's gravity. This was the most unrealistic part of the movie.

It would have been a 5 star movie had they not introduced pseudoscience to needlessly make the plot easier to write.
Anyway, as a scientist there are so many things about this movie that bugged me, but mostly not because it's not realistic (I mean Star Wars is not even close to being realistic) but because it is so close to being realistic in so many ways but with a few things that are just so way off thrown in. It just makes it feel like poor screen writing in an otherwise good movie.
7 people found this helpful
See all reviews
Back to top
Get to Know Us
Make Money with Us
Amazon Payment Products
Let Us Help You
EnglishChoose a language for shopping. United StatesChoose a country/region for shopping.
© 1996-2022, Amazon.com, Inc. or its affiliates