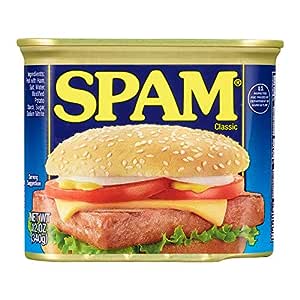 Pantry orders of $35 and up ship for free- a $5.99 shipping fee applies to orders under $35. Due to high demand, delivery may take longer than usual. Learn more
Currently Unavailable.
FREE shipping on all Pantry orders over $35. Get started

Statements regarding dietary supplements have not been evaluated by the FDA and are not intended to diagnose, treat, cure, or prevent any disease or health condition.
Added to Cart

SPAM makes a wide variety of versatile canned meat products. Spam Classic Luncheon Meat, 12 Ounce will help you make a variety of tasty lunches. Great for breakfast, lunch, or dinner Spam Classic is the perfect solution to a quick meal. Save time and incorporate a tasty meat into your life.

Bringing You Delicious Canned Meat Since 1937: The History of the SPAM Brand

Jay C. Hormel, son of George Hormel, had an inventive mind. He’d been working on a consumer-branded canned ham since 1926. After a decade the cooking and packaging technology aligned. And during a 1937 New Years Eve party, the name SPAM was coined and the brand was born.

Launched as 'The Meat of Many Uses,' SPAM products was quickly adopted by American housewives. By 1940 70% of urban Americans were eating SPAM products. But it was the arrival of WWII, and the need for easily- transported protein, that fueled the SPAM brand’s incredible growth. By 1959 over one billion cans had been sold.

4.6 out of 5 stars
4.6 out of 5
801 customer ratings
How does Amazon calculate star ratings?
Amazon calculates a product’s star ratings based on a machine learned model instead of a raw data average. The model takes into account factors including the age of a rating, whether the ratings are from verified purchasers, and factors that establish reviewer trustworthiness.

Majors67
5.0 out of 5 stars Spam Spam Spam - Heart Attack!
Reviewed in the United States on January 25, 2018
Verified Purchase
This is the most unhealthy food I can eat! Loaded with sodium, saturated fats, chemicals and makes my cholesterol levels dangerously high. But I love the taste!!! Be happy to answer any questions if I'm still alive.
Read more
41 people found this helpful
Helpful
Comment Report abuse

J.
5.0 out of 5 stars It's Canned Meat, What's Better Than Canned Meat? Lol
Reviewed in the United States on April 4, 2018
Verified Purchase
It's SPAM, lol.

What more is there to say about it? If you haven't tried SPAM, I dunno because you are some type of culinary snob, you should hop on the adventure and just give it a shot.

It's CRAZY salty, which is balanced when cooking in traditional Asian methods. I grew up eating this stuff dipping it into an beaten egg and frying. The eggs pretty much completely subdue the overly salty flavor and make it excellent as pair with rice, which further reduced the sodium assault on the taste buds.
Another popular method is making a basic Teriyaki sauce with Mirin, Soysauce, and Sugar. If you want to get more flavor adding some orange fruit preserve will make the sauce better. Combining everything on top of a bowl of rice for Musubi Rice Bowl with some nori, sesame seeds, and sesame oil drizzled on top makes for a great lunch.
Read more
16 people found this helpful
Helpful
Comment Report abuse

Greg H.
5.0 out of 5 stars Delicious! Nutritious? I don't know but it's good!
Reviewed in the United States on July 20, 2016
Verified Purchase
Spam is great. For those who never tried, it is practically the leftovers from animal cuts slurried together and formed into a can. However, that was during the war and now quality can be improved. If not, we are lied to every day by everyone so it wouldn't be anything new if I was eating pig bumhole. Anyways, it can be eaten out of the can although cooked is better and can be served in many ways. Don't let the processed look fool you. It isn't disgusting seeing as all meat is really disgusting. People say, "What part of the chicken is the chicken nugget from?" and the answer to that is that it's just meat put in a blender and formed into something so it doesn't matter if it's processed or not, what matters is what it is processed with and how and what is added etc. Listen, this is a cheap food so if you wanna spend $12 on a pound of meat, this isn't for you. If you are willing to buy a $3 can of meat, this is for you!
Read more
27 people found this helpful
Helpful
Comment Report abuse

Vicky Lupperger
5.0 out of 5 stars SPAM is SPAM. Good to keep a whole carton of these cans around for the zombie apocalypse. I like it like this...
Reviewed in the United States on March 20, 2017
Verified Purchase
What can I say? It's SPAM. If you've never had it, you just have to try it to understand it.

Sliced kind of thick (1/2 inch or so), sprinkled with your favorite spices (maybe some smoked paprika McCormick Gourmet Collection, Smoked Paprika, 1.62 Ounce and black pepper Watkins All Natural Gourmet Spice Tin, Granulated Black Pepper, 4 Ounce ), grilled on high for about a minute on each side, perhaps slapped on some of this bread Classic Hearth Krusteaz No Knead Hawaiian Sweet Artisan Bread Mix, 16 Ounce with some of your favorite condiment (like Gulden's Spicy Brown Mustard, 12 Oz ).

Also good to keep a whole carton of these cans around for the zombie apocalypse.
Read more
17 people found this helpful
Helpful
Comment Report abuse

Shaide
5.0 out of 5 stars SPAMTASTIC!
Reviewed in the United States on May 5, 2016
Verified Purchase
I love SPAM, I always have! I never could understand why it got such a bad wrap! It's delicious and can be prepared in so many different ways! It's like a swiss army knife of the meat world. I personally prefer grilling thick slices of SPAM and putting them on hamburger buns with tomatoes, lettuce, pickles and mayo and having a delicious SPAMburger.

Honestly? I think most people who are against SPAM have never tasted it, because it is incredibly delicious by any standards!
Read more
22 people found this helpful
Helpful
Comment Report abuse

Leann
5.0 out of 5 stars Spammed.
Reviewed in the United States on October 27, 2016
Verified Purchase
Not even going to try to review it. I think everyone over 30 has eaten it. You probably love it or hate it. I have seen how it is made and they use high quality meat, nothing like what they use in hot dogs. P.S. If your under 30 go ahead and try it. I love it sliced, pan fried and made into a sandwich. It is also great for camping because you don't need to refrigerate it until it's opened.
Read more
18 people found this helpful
Helpful
Comment Report abuse
See all reviews from the United States
Pages with related products. See and discover other items: Explore y cut dr browns for cereal