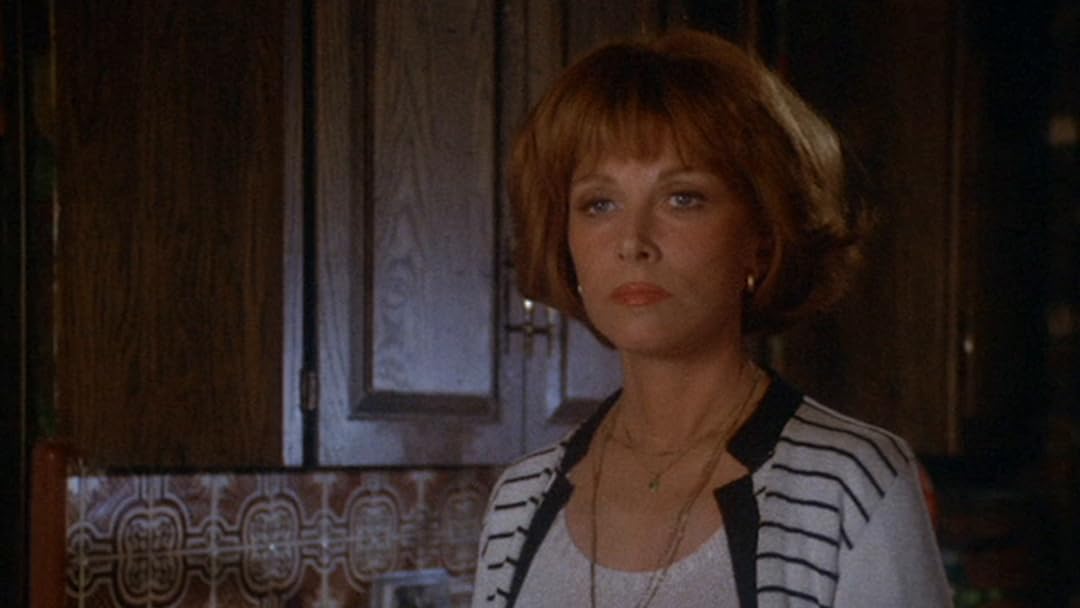 (107)
5.61 h 13 min197713+
This made-for-television thriller centers on a fat teenage girl who gets gruesome revenge upon her tormentors after she discovers that she has a special ability to cause terrible accidents with her mind.

NYC212Reviewed in the United States on October 6, 2019
4.0 out of 5 stars
70's style horror fun!
Verified purchase
I saw this as a kid when it was rerun on TV and I'm so glad Amazon is streaming it. If you like 70's TV movies and 70's style horror then you'll enjoy this movie. Relatively generic plot but it has a nice twist at the end. Great acting and gorgeous sets (the main house is beautiful and worth watching for that alone!). It's also fun to see Helen Hunt as a kid - she plays the younger sister. For the record - it's alarming that the main character was mean to be plausibly fat. She had a little teenage baby fat but was by no means overweight. They just put her in baggy clothing instead of hiring a truly overweight actress. Ugh!
5 people found this helpful

Khristine JacksonReviewed in the United States on July 31, 2020
3.0 out of 5 stars
The power to get even..!
Verified purchase
Well let's see...I saw this movie years ago ..on U tbe... Let's see the chubby teenage girl who get's bullied and gets even.. Except there wasn't much getting even except for the girl in gym class and the little sister nearly drowning in the pool. The mom is played by veteran actress Lee Grant ..and the dad is actor James Olson..he is mainly a television actor from the 1960's-1980's. Lee Grant she appeared in some big name movies and even directed movies as well.. She was in "Shampoo" with Goldie Hawn,Warren Beatty and Julie Christie ..Susan Myer's who plays Rita..may still work in the business? Helen Hunt we all know like Drew Barrymore and Jodie Foster who were all female child actresses has flourish past 18 years of age.. Sadly many child actor's career's stall after 16yrs or 18yrs .. The daughter has a special power and ..but little does she know that her mother is more powerful than she anticipated? The house is spectacular for 1977..except it would be considered an eye-sore today.. The 1970's was a great time for television ...no cable until HBO surfaced around 1978 or 79? .. Then the sleaze kicked in...!
2 people found this helpful

EinsatzReviewed in the United States on July 1, 2020
3.0 out of 5 stars
Hexed and a little bit wonky.
Verified purchase
The dimensions of the main character are called into dispute. Someone does not understand girth. And yet this whole movie depends entirely on this girl’s proportions. It’s paramount, she must be considered weighty for the story to work. Everything hinges on this otherwise the nasty girl bullies would have no target for their cruelty. And that’s where everything falls apart because this girl doesn’t fit the demands of the story. It also doesn’t help that she is unsympathetic and not as helpless as people think. This leaves the TV movie wanting something more substantial. The few instances of telekinesis aren’t enough to make this movie exciting or scary.
Truth be told, I only watched it because it featured Lee Grant (in a thankless role).
3 people found this helpful

William de LayReviewed in the United States on October 12, 2021
4.0 out of 5 stars
Fun And Entertaining 1970's Witchcraft Movie
Verified purchase
I enjoyed watching this 70's-era witchy film, but it suffers a bit from being dated, as well as from its flimsy plot.
First off, the strengths: all of the acting is quite good, especially for a "TV Movie"; there are some pretty remarkable special effects, especially when the nosy neighbor "blows up", literally; and it is cool to see the 1970's fashions, hairstyles, and particularly the retro decor of the house!
As for weaknesses: the plot kind of falls apart midway; some of the editing sequences seem badly jumbled; and the dialogue becomes really stilted at times.
Let's get back to the plot. Here is this young girl, who everyone is calling "fatty", "blimp", and "lard butt", etc., when in reality she's not fat at all. She merely has a few extra curves here and there. Some of the taunting and insults are exceedingly cruel -- but, confusingly, the girl looks perfectly normal. This anomaly adds to the overall implausibility of the film. Furthermore, when the young lady, and a possible accomplice, use witchcraft to take revenge, they only target one girl -- just ONE of the vicious bullies. After this one bully is violently dealt with, ALL the other bullies are immediately forgotten. What the heck? And, even more bizarrely, the "chubby" girl now begins to lash out -- supernaturally -- at her own family. Instead of teaching all the rest of the bullies a lesson, the girl now attempts to drown her 13-year-old sister, and have her dad run over by a speeding car. What the heck (again)?
Now, it is true that the accomplice may also have had a role in attacking the girl's family -- but the slender thread of the plot truly begins to unravel at this point. The attempted murders of the girl's dad and sister don't really make sense at all, especially in terms of the narrative and overall structure of the film. What, exactly, did they do to deserve death??
Another conspicuous flaw in the movie is the role of the "parapsychologist". His whole character seems very thinly developed (and unnecessary). We see him listening to cassette tapes of witchcraft spells and black magic rituals. But where, exactly, did these tapes come from? From the girl's mom? And how (and why) did that even come about? The tapes just suddenly appear, with no explanation whatsoever. And then the parapsychologist suddenly talks about "the coast being totally empowered with black magic". Huh?? Since when is "the coast" infused with black magic? It seems there are scenes missing that would help to explain these abrupt and half-baked developments, and provide some kind of logical transition. In fact, all of the parapsychologist's scenes could have been cut altogether, and the film would have been tighter, and flowed more smoothly.
And by the way, you may be amused to see that EVERYONE in this movie smokes and drinks all the time. That's the 70's for you. And who gives a damn about second-hand smoke?!
Anyway, if you can get past all of that, this is still a fun and nostalgic 1970's spook ride. There are some good twists. There are some genuinely creepy moments. And there is a pleasing sense of family closure as the film draws to an end. Also, it's fascinating to see Helen Hunt, at just 13 years old, embarking on her long film career. And Lee Grant, as the mother, is superb. Susan Myers, as the 15 year old neophyte witch, makes a very impressive debut. And James Olson (The Andromeda Strain, 1971), is effective and compelling as the bewildered dad.
All in all, this is an engaging and atmospheric supernatural thriller. It certainly held my attention. Millennials, however, may find it painfully slow and dull. But 1970's occult film enthusiasts will find a lot to like in this eerie and chilling vintage movie.

T. PerkinsReviewed in the United States on August 24, 2020
4.0 out of 5 stars
Just 70s thriller nostalgic dumb-fun, not to be taken seriously
Verified purchase
SPOILERS AHEAD- I enjoyed this as a teen, I was excited to see it was here on Prime. A couple of movie tropes and Hollywood formulaic ingredients: The misunderstood teen with a weight problem (of course she's beautiful and only "Hollywood" overweight); the stressed mother who loves them all and is trying to hold everyone together; the gorgeous suburban home; the handsome younger sister (what fun to see Helen Hunt!); the disconnected father- all with a little twist of sci-fi mind manipulation! So fun :). I especially love watching the mom put her in her place- Yeah, go Lee Grant! :D
2 people found this helpful

Kira S.Reviewed in the United States on December 9, 2018
2.0 out of 5 stars
Blast from the past
Verified purchase
This is worth watching just to see the costumes and hairstyles alone. A very young Helen Hunt (she plays a 13-year-old and looks about that age) wears an incredibly ugly swimsuit during a swim meet. In the first scene there is a group of girls who have feathered Farrah hair and wear bold Seventies prints. And the cloak the main character wears. Talk about over the top! The story itself, at least the "psychic" part, is laughable. The problem of bullying and teasing a girl who is only slightly overweight is very real, but the idea that she can get her revenge through psychic powers is absurd. Watch this for the nostalgia value, not for the story.
4 people found this helpful

Michi & TysonReviewed in the United States on July 14, 2020
5.0 out of 5 stars
Blast from my past!
Verified purchase
I fondly remember watching this on TV in the late 70’s or early 80’s, and I loved it. I was overjoyed to see it released on Blu-Ray and snatched it right up. Watching it filled me with cheese filled joy. I still want to live in their house! For fans of retro decor and fashion, this movie dishes it up in spades. Do not expect a masterpiece, just a fun filled (though a bit mean spirited at times) bit of 70’s made for TV fluff.
2 people found this helpful

VeeReviewed in the United States on August 12, 2020
5.0 out of 5 stars
An Oldie but a Goodie
Verified purchase
The Spell was a t.v. show that I watched back in the day, and was so excited to see that it was available on Amazon. I hosted a movie night to introduce this cult classic to family and friends that hadn't seen it. For those of us old enough to remember seeing it when it was first released was a nice stroll down memory lane.
2 people found this helpful
See all reviews
Back to top
Get to Know Us
Make Money with Us
Amazon Payment Products
Let Us Help You
EnglishChoose a language for shopping. United StatesChoose a country/region for shopping.
© 1996-2022, Amazon.com, Inc. or its affiliates