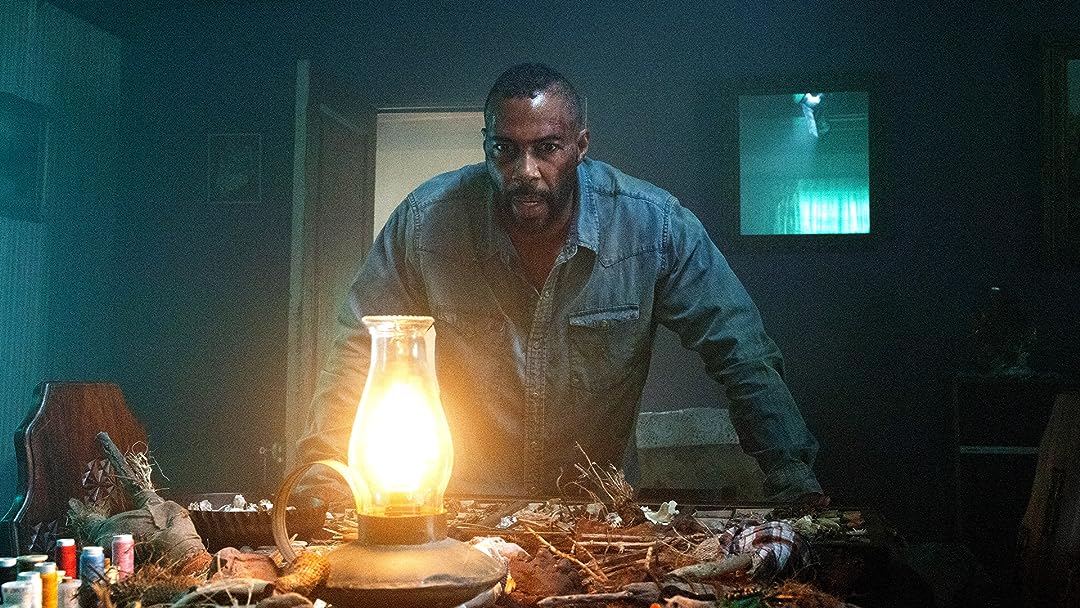 (37,018)
5.51 h 31 min2020X-RayR
After surviving a plane crash in rural Appalachia, a man tries to break free from a woman's dark magic and save his family from a sinister ritual before the rise of the blood moon.

EmReviewed in the United States on October 30, 2020
1.0 out of 5 stars
Movie felt unfinished and contrived
Verified purchase
Okay so there were a lot of scenes that just made the movie feel "thrown" together. The screenwriter for this movie was white, and it shows because a lot of the dialogue between the black characters was unnatural and weird. The movie presumably takes place in modern day since the son has a iphone 11. The characters live in the literal mountains of Appalachia which doesn't even make sense because if you know the mountainous regions of Appalachia--those areas are basically sundown towns. The most irksome part in all this was just the mannerisms. BLACK PEOPLE DON'T ACT LIKE THIS. Even the country ones. This movie was a caricature of black people from the country. The characters acted like literal slaves, which was explained by trying to imply Ellie and Earl WERE slaves from 1860, but NEVER explained or revisited. Marquis doesn't believe in hoodoo, but is able to recall all the how-to's of hoodoo once its convenient. This movie just feels like a non-black man read a book on hoodoo once and felt like it'd make a cool movie since its never been done before.

Save your money, folks.

And Kurt Wimmer, do better.

Ja'Kendria Magsby Reviewed in the United States on October 30, 2020
3.0 out of 5 stars
It’s not scary
Verified purchase
There could have been more character development. It would have been nice to know what lead to Ms. Eloise being the way she was. It’s a mix of Misery, Skeleton Key, Eve’s Bayou, and Serpent and the Rainbow. I wish I could get half of my money back.
59 people found this helpful

redgmr7Reviewed in the United States on November 2, 2020
2.0 out of 5 stars
Good idea executed poorly.
Verified purchase
I'm not sure what happened here but it was a good idea executed oddly. The dialogue and acting was over the top for the so-called "country" folk. Loretta Divine is a great actress but I'm not sure what happened here. Most likely a director who didn't understand how to dial it down. A lot of the dialogue came off as inauthentic and cliche. I get the feeling this was not written by someone who is actually a Descendant of American Slaves. Also something about the family seemed off. No chemistry, forced warmth. African Americans interact in a certain way and it was obvious this was not executed by anyone who understood that. They didn't interact or behave like a black family.
30 people found this helpful

Edumacated ConsumerReviewed in the United States on November 3, 2020
5.0 out of 5 stars
Loretta's ...LINES ARE ....DIVINE!!!!
Verified purchase
Her lines are worth the price of admission alone!
She wicked but you will be near tears at her little reads, retorts & responses!
She really carries the entire movie country as a bumpkin can be and a frightful mix of an old time religion gospel minister and a you do voo-doo high priestess spinster!

So the film was plenty enjoyable for that!

If you are expecting, even the likes of a more serious voo-doo ilk with more of a sinister back story similar to Kate Hudson's "Skeleton Key"

You won't find that kind of depth here but you may still enjoy the ride & the rather happier turn of events!
The film seemed to attempt the backstory but I don't think the Marquis T character's father back story really gave us that much more weight as I kept thinking it would...

For instance perhaps an old family vendetta between perhaps a house slave & a field slave with the Ellie character (played by Devine) seeking some old family vengeance upon Marquis.

But that was not the back story here it was more like remembering some words of wisdom from an abusive father of Marquis character but not much more depth than that!

So YES it could have added more intrigue & more of that history element the film seemed to introduce but did not really go deep with it. BUT you will settle gladly for those lines from the Devine (LOL)

You will enjoy the Ellie's pet Minor bird's lines almost as much as well in the film!
Take it for what it is worth & it really again is just a fun film not so much horror but frightening enough to enjoy!
.

C RReviewed in the United States on December 2, 2020
4.0 out of 5 stars
The only reason why I gave it 4 stars
Verified purchase
John Beasley and Loretta Devine are 2 of my favorite actors and that's the only reason this movie received 4 stars from me because their acting was impeccable as usual. Unfortunately, Hollywood continues to disrespect the religions Voodoo and Hoodoo by demonizing them and dehumanizing those who participate in the religion all while humanizing other religions who participate in the same rituals....tsk tsk tsk. Shame on the writers because this could've been a beautiful story...instead it was a story of fighting evil with evil :-(
19 people found this helpful

SoHoDarrenReviewed in the United States on November 5, 2020
1.0 out of 5 stars
Predictable
Verified purchase
Save your money and wait till it’s free. The characters are one dimensional with little to no backstory. It’s pretty obvious how things will end but it’s sad they couldn’t put down the tropes to make this movie less predictable.

The movie is about a successful man going to his father’s funeral. He’s piloting his own plane. His wife and children are just props. No one is memorable. You only get a glimpse of the lead characters abusive childhood through vague flashbacks of his father yelling. “Well I guess it makes sense to go up into the mountains in a single engine plane to attend grandpa’s funeral.” No it doesn’t.

The family gets separated and our main character is being held against his will by a sugary sweet religious elderly couple and their mute giant son on a rundown farm. The elderly couple of course are evil immortals who need to heal and replenish the town’s life force with animal and human sacrifices.

There isn’t much horror. The movie is creepy and the body horror is nauseating but there are only a few short horror scenes. This is a pretty tame movie.

Definitely a contender for best 2020 horror film. Spell’s story and delivery express the DNA of three influencing films admirably while preserving its own tone and stylish originality.

Still haunted by echoes of his childhood trauma, Marquis (Omari Hardwick; Power) has taken himself far from the home of his youth and far in life. He has exceled professionally, financially, and in building his own family. But upon the passing of his father, Marquis is summoned back to Kentucky to handle the estate.

From our introduction to Marquis’ workplace to family issues at the dinner table, the common cultural theme of race is placed firmly in mind. But soon race matters less, and culture itself and social class conjures conflict as Marquis nears his remote Appalachian origins.

Flying his family in his tiny private jet through a lightning storm, Marquis awakens disoriented and injured in the home of traditional Hoodoo practitioner Eloise (Loretta Devine; Urban Legend, Crash). As rural as rural gets, Eloise has no telephone and no care for money. So keeping him captive against his will poses no challenge out in the woods.

Eloise lives in a microcosm forgotten by time and governed by local mysticism. She is devout in her ways and will not be defied. Her family clearly has plans for Marquis, but only his greatest fears can divine what those plans may be. The more time Marquis spends in her house observing her and hearing her doctrines as gospel, he likewise learns more about her, the house, the local folk of this Appalachian woodsy hamlet, and her deceptions. But what about his family…? What happened to them after the crash?

At times I felt this movie flew too close to the sun. The concepts are amazing and the characters are wonderful, but I often felt some of the scenes and events needed more development. I’ll leave it at that and add that I still really enjoyed it. In fact, despite my nitpicking, this may have been the best horror film of 2020.

To compare this film to two other films I adore: the writing is good but doesn’t quite hold a candle to the recent work of Jordan Peele (Get Out, Us), nor does the atmospheric dread ever match the very high marks of The Skeleton Key (2005). But a page is admirably taken from Peele’s book and well-executed with respect to cultural tension. And in terms of intensity, I have three words for you: the nail scene! Let that notion simmer in your head… I won’t spoil it.

I felt the superstitious mysticism of Hoodoo was played short with respect to The Skeleton Key (2005). But still, it was played well! We had voodoo dolls (Bugatti), divination bones, alchemical powders and magic… and while I may criticize, The Skeleton Key’s (2005) cultivates dread based on superstition and the fear that magic just may actually exist. Whereas Spell weaves heavily its dread based on the terror of perceived magic and the need to somehow overcome it!

I want to be very clear. I liked this film a lot. So when I say it “fell short” of The Skeleton Key (2005) and Get Out (2017) in various respects, it should not be taken as negative criticism. But rather as compliment, that I would compare it to two top notch films I hold so highly. Director Mark Tonderai (The House at the End of the Street) has brought us a very good film! Definitely a contender for best 2020 horror film, our story and delivery express the DNA of three influencing films admirably while preserving its own tone and stylish originality.
8 people found this helpful

Murpher3Reviewed in the United States on November 2, 2020
3.0 out of 5 stars
Creative but Lacks Depth
Verified purchase
The storyline is creative and creepy. I wish the movie came around in more of a full circle. I wanted to support Omari Hardwick and Loretta Divine. Their acting was great. However, I left the movie with questions that could have been potentially addressed in the movie. I appreciated the homage it gave to Stephen King's Misery with the quick camera shot to the penguin figurine. I just watched that over Halloween weekend. I'm glad I supported the movie. We are very creative when having the opportunity.
8 people found this helpful
See all reviews
Back to top
Get to Know Us
Make Money with Us
Amazon Payment Products
Let Us Help You
EnglishChoose a language for shopping. United StatesChoose a country/region for shopping.
© 1996-2022, Amazon.com, Inc. or its affiliates