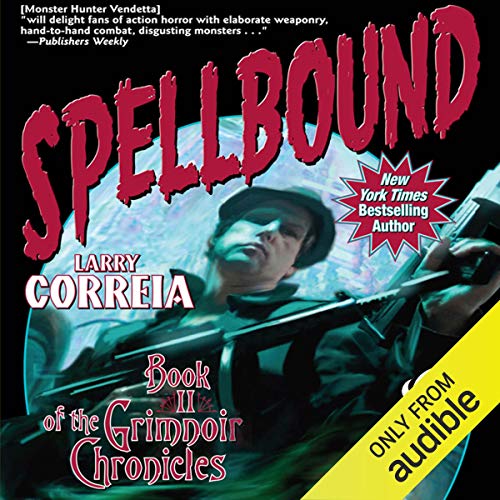 4.7 out of 5 stars
4.7 out of 5
405 global ratings
How are ratings calculated?
To calculate the overall star rating and percentage breakdown by star, we don’t use a simple average. Instead, our system considers things like how recent a review is and if the reviewer bought the item on Amazon. It also analyzes reviews to verify trustworthiness.

Christian Lindke
5.0 out of 5 stars A Supernatural Superhero Suspense Tale
Reviewed in the United States on March 23, 2017
Verified Purchase
I'll be the first to admit that Larry Correia's "Monster Hunter International" books are an acquired taste and written for a very specific audience of gun enthusiast horror fans. That may lead one to believe that Correia's other books are written in a similar vein, but this is not the case at all. Correia's "Son of the Black Sword" is an excellent starting point for a fantasy series that echoes the best of Dave Duncan's "Reluctant Swordsman" series. Similarly, Correia's "The Grimnoir Chronicles" is a trilogy of books written for a much wider audience than his more famous MHI series. "The Grimnoir Chronicles" is a high concept mashup of the X-Men, Dashiell Hammett's Continental Op, Doc Savage, H.P. Lovecraft's Cthulhu Mythos, with a dash of Sax Rohmer's Fu Manchu.

That may seem like an impossible combination to pull off, but Correia pulls it off brilliantly. As the first book in the series, SPELLBOUND faced quite a challenge. It had to introduce the reader sufficiently to Correia's mythic world of Supernaturally Powered Talents and balance the necessary exposition with the demands of an action thriller. This is where Correia's writing really shined. Through the skilled inclusion of intriguing alternate quotes from famous historical figures, and by capturing the thoughts of several protagonists, the reader is introduced to one of the most innovative superhero universes yet created.

If you ever wondered what kind of superheroes the Lovecraftian circle of Robert E. Howard, H.P. Lovecraft, and Clark Ashton Smith would have come up with, you might have imagined heroes who derived their powers through magical energies transferred to them by an amorphous tentacled alien intelligence. That's exactly what you get here and it's a delight. Add to that a villain who is on the right side, though using the wrong means, of a much bigger struggle and you've got a little piece of magic.
Read more
6 people found this helpful
Helpful
Report abuse

JWatts
4.0 out of 5 stars Super heroes in FDR America
Reviewed in the United States on June 20, 2016
Verified Purchase
A very interesting setting. Unlike any other science fiction I've previously read. The characters were well developed, the action was tense and the overall plot line had a great 3 book arc. Kudos to the author for actually creating a short series and concluding it. Too many science fiction series seem to go on interminably until the author gets bored with the series and then it just stops.

The setting is an Earth parallel where magic (via a minor science fiction premise) appears in the mid 19th century and starts sparsely but grows over time. By the time of the series (1930's) magic has become a major factor driving societal progress. However, it's not an overwhelming factor, with the rapidly developing technology of the time being a greater factor. For the most part the magic is similar to the standard super hero's mutant abilities. However, for the most part, the hero's abilities aren't as strong as the standard comic books super hero and they all quickly drain their charge as they use it. So most hero's pack guns and use those just as much as their supernatural abilities. This makes the plot lines a little more believable than you standard Marvel or DC plot line.
Read more
2 people found this helpful
Helpful
Report abuse

Paul Genesse
5.0 out of 5 stars The Grimnoir Series is the Real Deal
Reviewed in the United States on April 10, 2012
Verified Purchase
This is part of the review I wrote about Hard Magic, book one in the Grimnoir Chronicles by New York Times bestseller, Larry Correia:

"Imagine X-Men crossed with the 1920's period show by HBO, Boardwalk Empire . . . The world building is top notch and well researched . . . the alternate history alone makes this worth the read . . . . There's airships, superhero smack downs, lots of guns, and great writing. If you enjoy lots of action and have a special place in your heart for super heroes, this is the book for you."

Now onto the review of the even more awesome book two, Spellbound.

I just finished reading Spellbound, book two in the Grimnoir Chronicles, and loved it even more than the first one. The series is so much fun. In Spellbound the heroes from Hard Magic, mostly Grimnoir Knights, are put in serious danger as they are blamed for an assassination attempt on the president--Franklin D. Roosevelt. Those with magic, (called Actives) are then targeted by the government, mostly by the `F' BI, and a secret government organization called the OCI, and soon Jake Sullivan, a kick ass Grimnoir Knight, is public enemy number one.

The opening of this book, and the first few chapters are so entertaining. I particularly loved the scene with the machine that Thomas Edison invented--a telephone that can contact the dead. The man on the other side wants to talk to Jake Sullivan--the man who killed him--and the message he gives Jake is bad, bad news. Something is coming to devour the Earth, and without certain preparations, there is no hope for the world. The hints of this were in book one and now it's all put on the table.

We knew that Jake was a bad ass. He's called a "Heavy" and can spike gravity all around him, and ruin anyone's day, but the big news is that we learn why the teenage girl from Oklahoma, Faye, is so powerful. She's a "Traveler" who can teleport at will and is the most powerful "Active" on the planet, which we knew because of what she did at the end of book one, a truly spectacular feat that amazed and terrified everyone. I think of Faye as the "Ninja Assassin Queen." You do not want to mess with her. Ever. She will teleport behind you and put a bullet in your head before you can blink once. Seriously.

The characters are great, and Spellbound is an epic story, and has so much action and lots of fascinating alternate history world building. It's actually 1933 in book two, and one of my favorite parts of world building was a letter posted at the beginning of a chapter that was from Robert E. Howard to H.P. Lovecraft. I was in Nerdvanna after I read that. Robert E. Howard wrote the Conan stories and Lovecraft invented the Cthulhu mythos.

It's worth noting that the year 1933 was the year that King Kong (the original movie) came out and Larry Correia's love of monster movies carries over into this book in a pretty spectacular way at the end of the book. The King Kong parallel was awesome, and all the historical details, small and large, were so great.

The Grimnoir series is the real deal. Hard Magic was no fluke. Spellbound ups the ante with dangerous villains, fantastic characterization, brilliant world building, intense action, and a great story that will enthrall you from beginning to end.

Peter2
3.0 out of 5 stars Nothing spectacular, but a good solid read.
Reviewed in the United Kingdom on December 19, 2019
Verified Purchase
Larry Correia has done a solid workmanlike job on this, and if you enjoyed Hard Magic, you'll probably enjoy Spellbound.
Read more
Report abuse

Mr P
5.0 out of 5 stars Great
Reviewed in the United Kingdom on February 2, 2016
Verified Purchase
Great fun. A well imagined world. Plenty of action and humour. Have now read the entire series. I had misgivings about the series having found them after reading the monster hunter international books. Not really into 'magic action books', or at least I wasn't.
Read more
Report abuse

Mr. Giobblin
5.0 out of 5 stars Better than Monster Hunter?
Reviewed in Italy on July 29, 2014
Verified Purchase
I just finished this book, sequel to "Hard Magic", and I'm speechless.
I already knew that Correia was good, but this is ridiculous!
The characters, the plot, the world building... it's like a perfect clockwork mechanism.
I can't wait to read the 3rd book.
Read more
Report abuse

robins111
5.0 out of 5 stars Five Stars
Reviewed in Canada on July 5, 2014
Verified Purchase
follows the story line well..
Read more
Report abuse
See all reviews
Back to top
Get to Know Us
Make Money with Us
Amazon Payment Products
Let Us Help You
EnglishChoose a language for shopping. United StatesChoose a country/region for shopping.
© 1996-2021, Amazon.com, Inc. or its affiliates