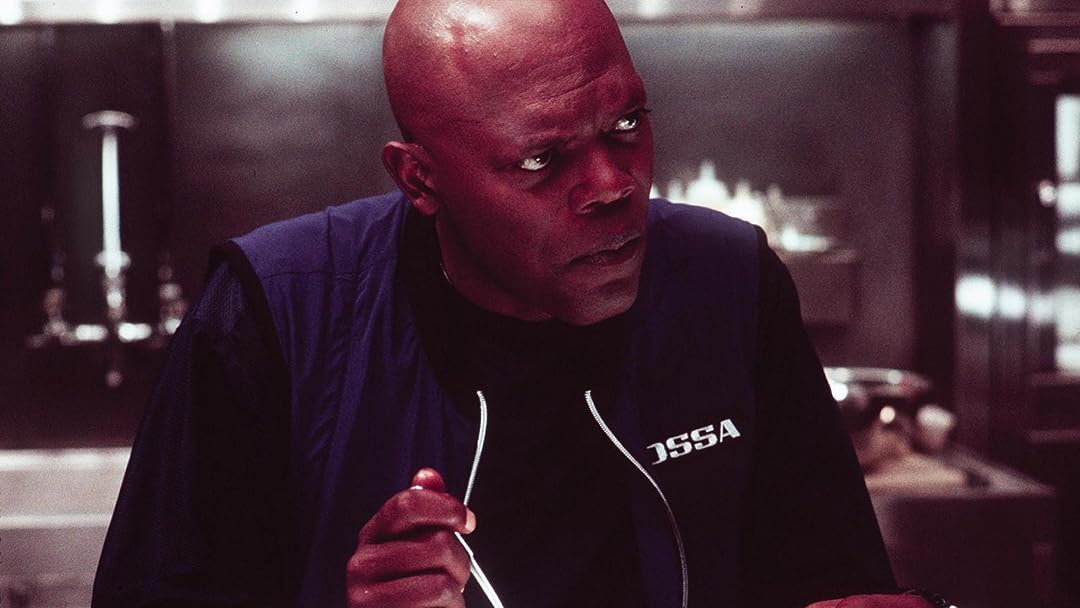 (2,831)
6.12 h 14 min1998X-RayPG-13
Dustin Hoffman, Sharon Stone and Samuel L. Jackson star as a group of scientists recruited by the Navy to conduct a secret underwater mission to explore an alien spaceship.

Jerry JonesReviewed in the United States on November 28, 2018
3.0 out of 5 stars
Half baked movie
Verified purchase
This movie is so frustrating! The first half is so well done, with great special effects, good acting, and good music. But then something happens about halfway through. The movie just falls apart and completely leaves the well-written book in the dust in terms of changing plot points, characters, and many other things. There are scenes that literally feel like they were edited together with different footage to simply complete the movie, as if they didn't have time to film everything so stuck some other footage in there to bridge the gaps. It's so disjointed and frankly would be hard to follow if I had not read the book first. I read in the Amazon X-Ray that even Dustin Hoffman wasn't happy with the finished product and felt they rushed it to the theater to make a deadline rather than produce a well made movie. I have to agree with him. Samuel Jackson is awesome, Sharon Stone is much more likeable than Beth in the book, Dustin Hoffman is pretty annoying at times, but the other supporting actors are pretty good. Too bad they changed some of the best parts of the book to try to make a budget/deadline. It doomed what otherwise would have been a great movie adaptation.
14 people found this helpful

Kenneth AndersonReviewed in the United States on January 14, 2019
1.0 out of 5 stars
Amazingly Stupid
Verified purchase
This is obviously the product of a bunch of morons who know nothing of science or quality screenwriting getting together and saying "Let's make a rip off of 2001. It will be MINDBENDING!!" 2001 had two genuine geniuses behind it: Clark and Kubrick. Instead this movie resorts to idiocies like a circular keyboard and then saying "The code was wrong!" But if H had meant J then "the" would have been spelt "tje" but it wasn't. Actually if you were decoding from binary one misstep would have meant total gibberish everywhere. If you want to make a brilliant movie hire a brilliant sci fi writer to collaborate with a brilliant director. Else stick to making adaptions from comic books which fits your talents and IQs.
10 people found this helpful

RayBReviewed in the United States on December 15, 2018
4.0 out of 5 stars
A Fine Execution Of A Good Story
Verified purchase
This is a satisfying sci-fi drama with good performances all around.

SPOILER (Sort Of): What the Sphere is, is a sentinel positioned outside an inhabited star system, that acts as a filter to deny less advanced and mentally disciplined species access to the alien's star system or space. The premise is, that if you haven't a mind disciplined enough to absolutely control your thoughts, consciously and subconsciously, you're carrying too much biological baggage to be of interest to these aliens. You're simply too primitive and too dangerous.

What bugged me in this movie is how unwise the Barnes character (Peter Cyote) is. He is the mission commander, and he goes out of his way to incite discord and undo stress between the other members of his team. This is simply stupid, and it makes a bad situation far worse--and all unnecessarily. It's entirely possible to know a thing and still STFU about it. Duh?

Peter Cyote is an excellent actor, but the script for his character, while adding palpable tension to the story, is simply unlikely in my eyes. No highly trained and sane commander would do this.

Sphere is a good story typical of author Michael Crichton, and an annual watch for me.

K. L. HuntReviewed in the United States on July 16, 2021
4.0 out of 5 stars
You'll like it if you want a psychological thriller mixed with a horror movie underwater.
Verified purchase
I'm writing this review because I noticed a lot of people giving it a horrible rating. I can understand why, but I thought I'd give my two cents. This is the underwater movie that makes you think a little bit about what life could be. It might be something that literally changes reality as you know it.

I watched this a lot as a kid, so it's really easy to remember how good it is. The costumes and design are all very nice. So visually you're taken care of pretty well. It falls short on the alien bit. Not even just alien bit but there's a suspenseful creature underwater that's never shown. I thought they did good with not showing it, but I remember my dad absolutely hating that they never showed it when I watched the movie a long time ago. Apparently, towards the end if you check the X-Ray trivia, you'll notice it says they had to reshoot the ending because without it the ending would be too complicated for audiences. So you're in for something a bit more psychological than another alien movie.

In fact, if you're looking for a psychopathic, rampaging, underwater alien killing the crew try Deep Star Six or Leviathan. If you want another movie that's got underwater aliens in it then try The Abyss. Virus is one that takes place on a ship, so you won't get anything underwater, but the psycho alien sort of thing is in that too with the water setting.

I went on a short underwater movie spree awhile ago for some reason, and I always just come back to Sphere cause it does such a good job of making you feel like you're really at the bottom of the ocean and there's this horrifying presence communicating with your crew.

I can see why other people disliked it so much, but since I've seen it probably a dozen times I thought I'd say it's worth it in my opinion.

ryan anthony leo elworthReviewed in the United States on August 24, 2019
1.0 out of 5 stars
Why kill the book's plot so badly?
Verified purchase
I think this is the worst adaptation of a book to a film I have ever seen. For those of you who rate this movie four or five stars, I guess you should read the book too since it is infinitely better! There are so many scenes that feel completely silly the way they are done and would be completely implausible in real life like cracking the circular code instantly. There are tons of plot points that were completely gutted but still left in in a strange way or just completely changed into something far worse (the books harry reads and makes, why did Beth arm the explosives, why is the code actually a circle, why does the sphere exist, why does Beth try to kill Norman, how do Norman and Beth get inside the sphere, the list goes on and on).
6 people found this helpful

BAT-505Reviewed in the United States on February 11, 2019
5.0 out of 5 stars
The sphere truly gives you food for thought
Verified purchase
The. SPHERE.. is truly one of the great science fiction movies especially on Blu-ray of which I am glad it finally went to Blu-ray and I highly highly recommend this movie for your collection because you will truly not be disappointed.. especially with the power from the sphere.. and how it affected the main three characters in this movie and how it affected all of the crew members including themselves and the courage they mustard at the end of the movie to turn that power away and forget.. in a lot of ways that same power is biblical but does not come from a..sphere.. but only a child of God who is filled with the holy spirit with the evidence of speaking and praying in another tongue would understand what I mean... but this is truly a great movie and I only wish that they would have made a part 2 to this movie and called it...THE SPHERE..PART 2..( " THE ORIGIN " ).... I think that ,..would be a great movie.. and also directed by Barry Levinson.. so by all means get this movie ... you will not be disappointed...
One person found this helpful

Cris KamuraiReviewed in the United States on June 30, 2021
4.0 out of 5 stars
"Underwater Geometry"
Verified purchase
Great watch, would watch again, and do recommend.

I feel like I have a thing for the isolationism of deep sea bases. "Bioshock", "Deep Blue Sea", "The Meg", "Underwater", "The Abyss": just the idea of being far away from any help in the most dangerous living conditions possible on the planet.

Add in a mysteriously time traveling alien sphere and let bake in the survival situation where people are losing their minds and things keep manifesting into existence.

It's a little insane, but it has a quality cast, plot, and some great action for all the characters being a bunch of nerds.

Simon JesterReviewed in the United States on June 9, 2021
3.0 out of 5 stars
Guitly Pleasure
Verified purchase
I have watched Sphere several times. Every time I have been tired and just wanted to watch some old science fiction. The interactions between Samuel L. Jackson and Dustin Hoffman are great. Liev Schreiber is alright. Peter Coyote's character is terrible and unbelievable. Sharon Stone is boring. Queen Latifah is great. Marga Gomez is...Marga Gomez?
Dustin Hoffman admitted he was disappointed with the film and the result was due to budget restraints. Fans of psychological science fiction will enjoy a first viewing.
The movie is too long. I think that is one of its greatest weaknesses.
See all reviews
Back to top
Get to Know Us
Make Money with Us
Amazon Payment Products
Let Us Help You
EnglishChoose a language for shopping. United StatesChoose a country/region for shopping.
© 1996-2022, Amazon.com, Inc. or its affiliates