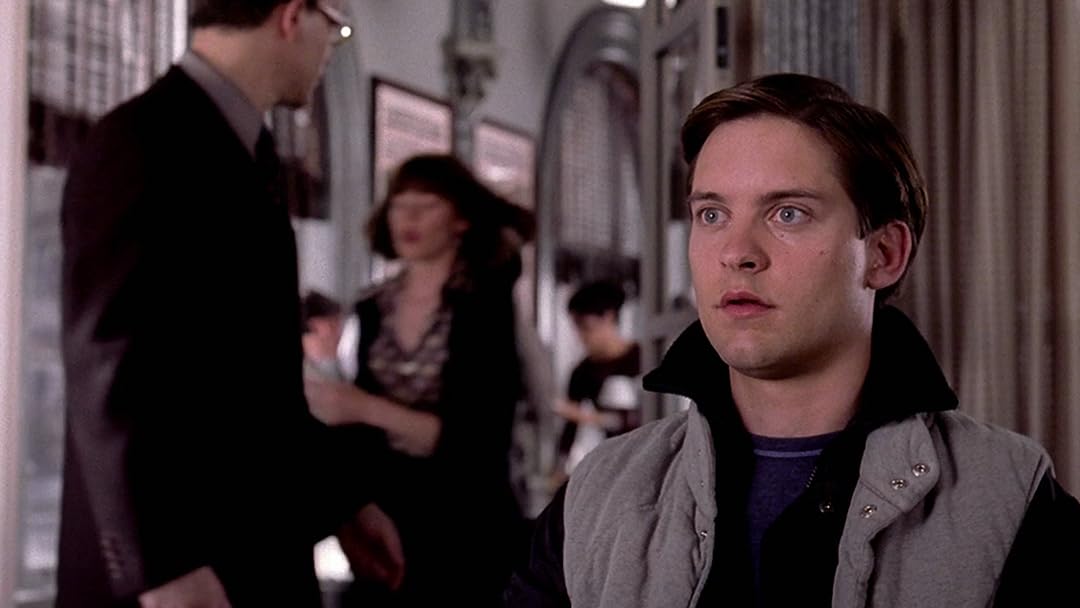 (6,433)
7.32 h 7 min2004X-RayPG-13
Peter Parker (Tobey Maguire) gives up his crime-fighting identity of Spider-Man in a desperate attempt to return to ordinary life and keep the love of MJ (Kirsten Dunst). But a ruthless, terrifying new villain, the multi-tentacled Doc Ock, forces Peter to swing back into action to save everything he holds dear.

joel wingReviewed in the United States on December 31, 2020
3.0 out of 5 stars
Conflicted Parker does he want to be a superhero or boyfriend?
Verified purchase
Spider Man 2 is about Peter Parker facing up to his responsibilities of being a superhero. Did, he really want to do that with his life or would he rather be with MJ and go to school? So far it was impossible for him to balance all of those aspects of his life. He was failing school because he was always late and tired due to being Spider-Man. He still loved MJ but he couldn’t be with her because he was afraid she’d be hurt if anyone knew his secret identity. At one point the pressure becomes too much and he gives up his supersuit to be just Peter Parker. Sometimes it seems like the movie spends too much time on the Parker-MJ dynamic however and loses track of the fact that it’s a superhero story.

The bad guy in Spider-Man 2 is Dr. Octopus. He’s a classic example of the mad scientist. They did a really good job with the effects on his eight arms. Again, if they hadn’t done so much on Parker’s love life there would have been more time on the antagonist.

Overall the Spider Man sequel is a good watch, it just could have done better if it had edited down Parker’s love life.
C

mdkReviewed in the United States on July 9, 2020
5.0 out of 5 stars
Real Deal Spidey
Verified purchase
The best Spider-Man movie, bar-none. I prefer Toby Macguire's Spidey by far over the entertaining, but ultimately flat MCU Spider-Man, who's basically just Tony Stark's executive assistant. The character of Spider-Man, while something of a trickster, always had a huge streak of sadness buried within. Macguire's hangdog face always conveyed that perfectly. MCU Spidey by comparison is just another vacuous Gen Z kid with zero gravitas. Anyway, this is a great superhero movie but it's too bad studio-suit meddling reached a fever pitch a few years later, resulting in the mess that was Spider-Man 3. And don't even get me started on the two interim "AMAZING SPIDER-MAN" movies, especially the second one. I still have no clue what those were supposed to be.
4 people found this helpful

Brandon S.Reviewed in the United States on May 31, 2021
2.0 out of 5 stars
James Franco cries for 2hrs and 7 mins
Verified purchase
The Sam Raimi Spider-Verse is, to me, the most well choreographed mess the early 2000's produced. I grew up loving these films but a quick trip down memory lane was all it took to realize just how much of a hot mess this trilogy actually was which explains why it's produced countless memes throughout the years.

Even Alfred Molinas (Doc Ock/Dr. Otto Octavius) performance was entirely forgettable and the inhibitor chip malfunction that led to metal tentacles controlling him right up until the very end fell flat and left me confused. Were the tentacles controlling him or was it his own grief/fear of failure that caused him to go from a man of science and poetry to an ego maniac that completely disregards human life to accomplish his goals? Hard to tell.

All that being said though, the writing and direction are there (I guess) but the execution and poor use of CGI really didn't distract from the cast and their abysmal performances. I understand that CGI was still young at the time of this films release but I swear it was as bad as the Pear scene from Attack of the Clones.
One person found this helpful

StevieReviewed in the United States on September 21, 2020
3.0 out of 5 stars
Movie Is 5 Stars... But This Specific Version IS NOT 4K!!!
Verified purchase
Please note that Spider-Man 2 is not only one of the best superhero movies made, but Spider Man 2 is hands down, one of the best OVERALL movies EVER made.... This critique though is only relegated to video quality in 4K.

Just know that "Mastered in 4K" doesn't mean "4K Video Output"... Once again.... This IS NOT an actual 4K movie!
2 people found this helpful

TeaTheTeaReviewed in the United States on November 9, 2021
5.0 out of 5 stars
Nostalgia Bomb
Verified purchase
This movie is absolutely one of my favorite super hero movies. The combination of satisfying acting and goosebump inducing music from Danny Elfman gave me one of the best movie experiences when I was a kid, and still gives me an amazing experience today. The struggle of Peter in this movie gives the audience a way to empathize with him. Do we do whats right? Do we do what we want? Do we do whats easy? This will always be a favorite.

David CReviewed in the United States on February 28, 2020
5.0 out of 5 stars
Spiderman 2, a great classic movie!
Verified purchase
I wanted to give my niece a gift for Valentine's day & she decided to ask for the Spiderman 2 movie. She was delighted when it arrived. Being a fan of the Spidey movies (the one's with Tobey McGuire, of course) she acquired all three movies. The movie is great and I will definitely buy from this seller again.
Good movies at good prices... I like that! 👍👍

JohnAroundTheCornerReviewsReviewed in the United States on July 23, 2015
5.0 out of 5 stars
EIGHT extra minutes -- enough that I"m glad I watched both versions of "Spider-Man 2" (and 2.1)
Verified purchase
"Spider-Man 2.1" is, for all practical purposes, the director's cut for Spider-man 2.

This movie is identical to Spider-Man 2, except for 8 added minutes of content, and possibly some rearrangement of other minutes (though I don't remember any of that happening). Knowing other "director's cuts" that I have watched (zealously at times), there may have been some content in the earlier movie that was not in the second. For this reason, I generally purchase every version of a movie, usually two if there is a director's cut, or in the case of Christopher Reeve's Superman, three versions (theatrical, two-night television event (Lester's Cut), and Donner's Director's Cut (2006).

I highly recommend that you purchase both Spider-Man 2 and Spider-Man 2.1 (and of course, the other movies that "Spider-Man" swung his web for.

J. DavisReviewed in the United States on April 18, 2007
5.0 out of 5 stars
One Of The Better Extended DVDs
Verified purchase
When I found "Spider-Man 2.1" at Wal-Mart, I wasn't expecting much. Ever since "Lord of the Rings," extended DVDs of movies in franchise series have become the norm, and some are not very impressive. One thing that made me decide to get it was completely new Special Features. I'd bought the first two Spider-Man films earlier this year, and I hate getting a DVD with an altered movie but the same Special Features rehashed.

The extended film is worth it! (Especially at $13) Instead of little bits where you immediately think "Oh, look, something new," the new bits of footage here are so seamlessly interwoven, most of the time I realized "That wasn't there before!"

There's a longer talk between Harry and Peter during Pete's birthday party, which leads into Aunt May and MJ bringing in the cake. (I didn't pause to count the candles!) There's a new scene where a friend of MJ's asks her if she's sure she's with the right guy, strengthening the ending. The elevator scene is not extended: it's a completely different and longer version! I don't laugh at movies much, but this new scene dug up some chuckles! There are also new bits added to the fight on the train, as well as other bits. Because of the seamless integrating, I can't quite recall them all!

I would have liked to have seen some other scenes extended: more about Aunt May would have been nice: in fact, after watching this, I found out there was a scene in some theatrical versions that had Peter call Aunt May near the end of the film, but for some reason she doesn't answer the phone, though she is seen hearing it ring. This would've been interesting, and helped further whet our appetites for "Spider-Man 3."

However, there is nothing here that would make the movie go beyond a PG-13 rating, so if you're looking for more violence, blood, gore, nudity, or sexual or sensual material, it's not here. As above stated, some of the fight scenes are extended, but nothing worse than what was already in the movie.

Regarding the Special Features, now: I haven't watched them all yet. Like I said before, the Special Features of the previous DVD are not repeated, but the menus are otherwise identical. Not even the Audio Commentary is the same. In fact, this time Producer Laura Ziskin and Screenwriter Alvin Sargent get to do the commentary. I'm an aspiring screenwriter myself, so I intend to listen to this commentary soon.

From what the packages say, the Spidey Sense feature (I haven't used it on the other one) is at least enhanced, showing you behind the scenes footage. However, the shrinking of the movie to make it "Picture in Picture" can be annoying, especially if your DVD player pauses for a transition.

There is one weak special feature: "Inside 2.1" just points out the new and extended scenes... really, shouldn't this be on the audio commentary?

If you're planning a "Spider-Man Party" before going to see "Spider-Man 3," get this one! You will not be disappointed!
3 people found this helpful
See all reviews
Back to top
Get to Know Us
Make Money with Us
Amazon Payment Products
Let Us Help You
EnglishChoose a language for shopping. United StatesChoose a country/region for shopping.
© 1996-2021, Amazon.com, Inc. or its affiliates