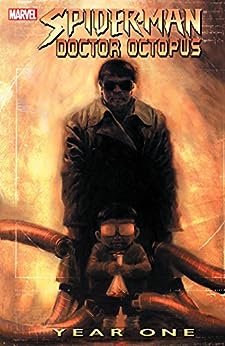 Peer behind the curtain to witness the birth of a mad genius! Featuring Doctor Octopus's first encounters with both Peter Parker and Spider-Man, the first appearance of Doc Ock's arms, and the true inspiration that led him to build his remarkable appendages - which may have come from a certain web-slinging wall-crawler!
Read more
Previous page
Next page
Kindle e-Readers
Fire Tablets
Free Kindle Reading Apps
Available on these devices 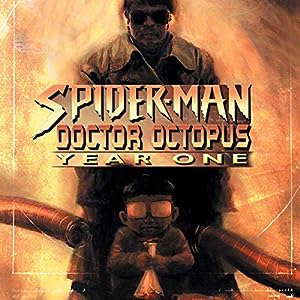 4.7 out of 5 stars
4.7 out of 5
25 global ratings
How are ratings calculated?
To calculate the overall star rating and percentage breakdown by star, we don’t use a simple average. Instead, our system considers things like how recent a review is and if the reviewer bought the item on Amazon. It also analyzes reviews to verify trustworthiness.
Top reviews

B. Daniel
3.0 out of 5 stars A new Year One for an Old Foe!
Reviewed in the United States on April 19, 2012
Verified Purchase
The Year One subtitle automatically brings to mind "Batman: Year One." Every hero has had one, but they never do a comic that focuses on year one for the villains. Okay well rarely. In Doctor Octopus Year One we see young Otto Octavius and all the issues he deals with that make him the shy introverted genius that creates his famous robotic arms. We also see the change in his personality after his accident, but Zeb Wells made it very organic. And I love Kaare Andrews artstyle. It's classic and yet modern. He captures early Spidey and Doc Ock to perfectly and the writing is very good. You almost feel bad for Otto...almost. If you're a Spiderman fan this is definitely worth a read.
Read more
2 people found this helpful
Helpful
Report abuse

Sam Green
5.0 out of 5 stars Sensitive portrayal of hero and villain
Reviewed in the United States on January 9, 2022
Verified Purchase
In recent years Most writers Focused on spider-man As a hero. It is good to read a comic which On as the characters legacy.
Read more
Helpful
Report abuse

PinkMolly
4.0 out of 5 stars A good read for Doctor Octopus fans.
Reviewed in the United States on October 21, 2015
Verified Purchase
A bit of a darker and more sinister take on Doctor Octopus' origins. An interesting read, though there were some character design changes that seemed unnecessary and sometimes the mood was so grim it seemed to be a bit much.
Read more
One person found this helpful
Helpful
Report abuse

Аmazon Customer
3.0 out of 5 stars Three Stars
Reviewed in the United States on November 8, 2017
Verified Purchase
Not a fan of retcon
Read more
Helpful
Report abuse

Bobby
5.0 out of 5 stars A great detailed version of Doc Ock
Reviewed in the United States on July 22, 2013
Verified Purchase
Zeb Wells takes the simple origins of one of Spidey's most dangerous nemesis's and gives it new life in this stretched out story. If Doc Ock is ever reintroduced into film, I would love to see it inspired by this story.
Read more
Helpful
Report abuse

Lawrance Bernabo
HALL OF FAME
5.0 out of 5 stars The best Doc Ock mini-series from Marvel's summer of '04
Reviewed in the United States on April 21, 2005
Last year when "Spider-Man 2" was due in movie theaters the film was set up by every Marvel Spider-Man comic book when Doctor Octopus showed up as the villain. If that was not enough publicity for the film there were several mini-series published as well, of which "Spider-Man/Doctor Octopus: Year One" was the best of the bunch. The advantage that this five-part story by writer Zeb Well sand artist Kaare Andrews had over the others is that it focuses much more on Doctor Octopus. In fact, as you can guess from the title, this is essentially a retelling of the origin of Doctor Octopus.

The original origin of the character in "Amazing Spider-Man" #3 was that Otto Octavius was a brilliant scientist ("atomic genius") who designed his mechanical arms to allow him to work safely with radiation. But an explosion bound his arms to his body and affected his brand, turning the scientist bitter. In Stan Lee and Steve Ditko's story Octavius only has a pair of thought balloons before the explosion and the indications are that he was a brilliant atomic scientist that everyone admired. But in "Spider-Man/Doctor Octopus: Year One" the accident does not come until the end of the second issue.

Looking back before that fatal moment Wells and Andrews tell the story of a young Otto Octavius who was already deeply disturbed. He is a smart little boy who is tormented by the other kids and a great disappointment to his sadistic father. Fortunately, even as a little boy Otto knows something about acid, which explains why he would love science. In this story Otto is picked on his entire life and when he and a young Peter Parker have a chance encounter it is clear despite their common problem of having people break their glasses they are destined to go in different directions.

It also turns out that his over protective mother has done more harm than his abusive father, which is proven when she attacks her son's feelings for his young assistant, Mary Alice Anders. When Otto picks his relationship with his mother and his work over his love for Mary, he breaks her heart and literally seals his fate. Confronted with his mother's hypocrisy, Otto is not in his right mind when he gives a demonstration of his four-armed cybernetic apparatus and Doctor Octopus is born. What emerges is Otto's ego unleashed and when he breaks free from his holding cell he almost kills a young Spider-Man. Haunted by nuclear-tinged visions, Doctor Octopus believes he is being called by his creator and decides a nuclear power plant in Queens is where he can set the power of the atom free. Standing in his way, of course, will be Spider-Man.

Overall this story really is about the inner struggles of Otto Octavius and his transference of his obsession about atomic power to his super-powered opponent (the same way he thinks a nuclear reactor is his "mother"). Spider-Man is barely a minor character in this story, but that is appropriate for tale being told. Likewise the artwork by Andrews is extremely effective because this is not a Spider-Man story so it should not look like one. Andrews's artwork is better suited for a horror story than a superhero gig (I kept think Mike Mignola's "Hellboy" more than any other artistic point of reference). Granted, this version of Otto Octavius is totally whacked from page one, which makes it both over the top and inconsistent with how the character is usually portrayed in Spider-Man comic books, but Wells and Andrews do such a good job of running with it that you just go along for the ride and enjoy.
Read more
6 people found this helpful
Helpful
Report abuse

DJ Joe Sixpack
HALL OF FAME
5.0 out of 5 stars Well written and very engrossing
Reviewed in the United States on January 8, 2006
This book collects a fine, five-issue mini-series that gives Doc Ock his most in-depth origin story yet. Going back to Otto Octavius's preschool days, the first chapter shows him as a pudgy egghead, tormented by cruel kids and big bullies all the way through high school. A side story about an abusive, insensitive ogre of a father rings a bit false, but otherwise the lengthy comparison between Ock's miserable school years and Peter Parker's is an interesting touch.

Mainly it's the quality of the writing and artwork that stand out here; this is a very wordy, yet totally engrossing story, well complimented by Kaare Andrews' fine, fluid artwork. I was glued to this book from start to finish, and thought it was an excellent addition to the ongoing Spider-man saga. Recommended!
Read more
One person found this helpful
Helpful
Report abuse
See all reviews

Graham Mallalieu
5.0 out of 5 stars 5 STARS!!!!
Reviewed in the United Kingdom on February 27, 2019
Verified Purchase
A Nice book about the origins of Doc Ock and his rivalry with Spider-Man.
Read more
Report abuse
See all reviews