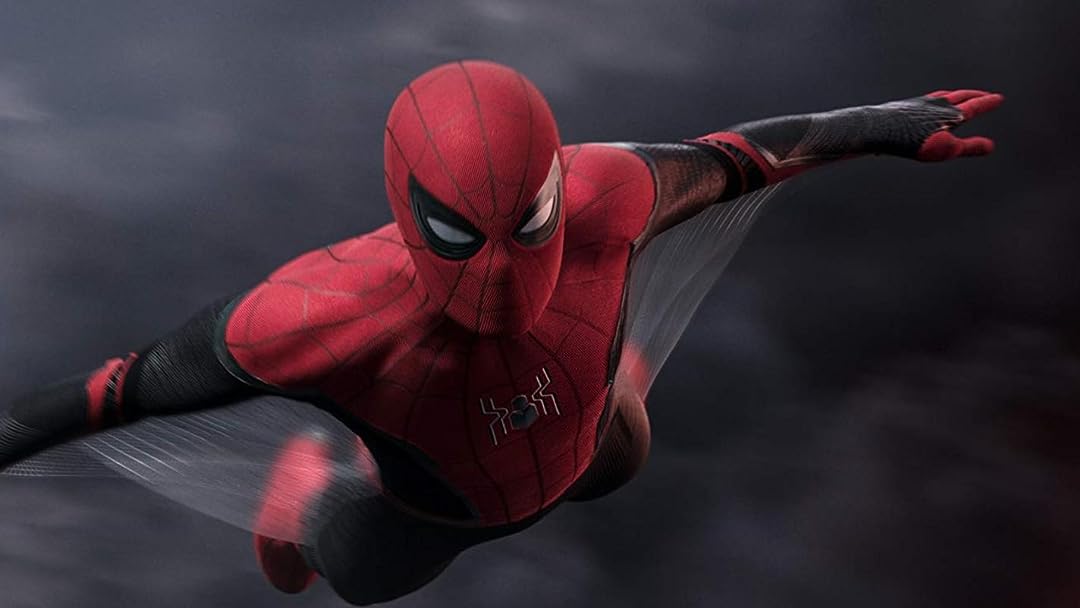 (98,949)
2 h 9 min2019X-RayHDRUHDPG-13
Following the events of Avengers: Endgame, Peter Parker (Tom Holland) returns in Spider-Man: Far From Home. Our friendly neighborhood Super Hero decides to join his best friends Ned, MJ, and the rest of the gang on a European vacation. However, Peter's plan to leave super heroics behind for a few weeks is quickly scrapped when he begrudgingly agrees to help Nick Fury (Samuel L. Jackson) uncove..

Save with with the Spider-Man two movie bundle on Prime Video shop now.

Movie NerdReviewed in the United States on July 3, 2019
4.0 out of 5 stars
Possibly the Best Spider-Man Movie
Until now the Sam Raimi ones got Spider-Man right the most. I had a problem at first with MJ being an outcast named Michelle and not a redhead. However, to me Kirsten Dunst’s was too bitchy and changeable.
Zendaya’s MJ has grown on me because she’s less conceited. While her scenes with Peter are more cute and funny. Than how stand offish MJ could be in Spider-Man 2 and 3 to Peter.
While the Mysterio scenes just blew me away and definitely do him justice. Jake Gyllenhaal did an excellent job. All the Iron Man tributes will make fans happy as well.
The whole school trip idea sounded lame to me though. Then you have Peter trying to avoid his hero duties, just to get closer to MJ. Also to relax after all the Infinity Stone drama.
However, Spider-Man Far From Home just might be the best Spider-Man. The last one was good but over-rated. It just felt like a light introduction to me. This film definitely made a better impression on me.

book loverReviewed in the United States on July 4, 2019
1.0 out of 5 stars
One of the worst movies of any genre I have ever seen, a complete waste of time...
My 14 year old son loved it. I'm 52 and this movie was total garbage. I guess they're not aiming for a wide audience as this was intellectually bankrupt. Nothing but computer generated effects, no story, a bad guy that was totally totally totally totally totally LAME, and a Spider-man that was a complete bore and hardly even wore his trademark red and blue costume. Add in lame jokes and this movie is a TOTAL DISASTER. Dumb, dumb, dumb, and stupid. This movie lacked a story, lacked acting, and lacked heart and soul. ZERO STARS.
219 people found this helpful

KaylaReviewed in the United States on July 4, 2019
5.0 out of 5 stars
Quite possibly the best Marvel movie to date
Like most people, I was excited to see the first Marvel release after Endgame, but was also slightly skeptical because of the time jump, Peter's overall character, etc.,). This movie completely blew me away. The CGI and effects were fantastic, appearing to be so real--which Mysterio is known for. It also ties up loose ends from Endgame such as the time jump, which everyone in this movie calls "The Blip". I loved seeing the maturity of Peter's character as well as he steps out of the "friendly neighborhood spider-man" role and is forced by everyone around him to fill Tony's shoes.

I found myself getting lost in admiration with the movie parallels from Endgame, Iron Man, and even Sam Raimi's 2002 version of Spider-Man. If you're watching closely, there's even a little cameo of Harry and Norman Osbourne's condo building, as seen in 2002 and 2004's Spider-Man and Spider-Man 2. Romance is not lost in this movie either, as the directors gave ample time for all character relationship development as well.

If anyone is looking to dive into the universe of Spider-Man, I would definitely recommend also watching Spider-Man: The Animated Series from the 90's. This definitely helped me understand Mysterio and the upcoming villains in movies to come. Overall, this movie was fantastic and I look forward to seeing the next few movies from the amazing directors at Disney and Marvel Studios.

NataliaReviewed in the United States on September 17, 2019
2.0 out of 5 stars
Doesn't include all the bonus features
Verified purchase
NOTE: This is not a film review; it's a product version one.

Gets a 2 because I LOVE the film itself, but I don't love that there's no clear product description for this version. I'd bought the digital copy of Homecoming with the bonus features before, and that one had all the bonus features in it--so, I had no reason to expect something different with this one.

Really wish I could get back my money, but seems like there's no way return digital copies on Amazon. It would be best to buy the DVDs when they come out in October if you want to get your money's worth.
118 people found this helpful

joel wingReviewed in the United States on July 3, 2019
2.0 out of 5 stars
2nd Marvel dud Really dropped the ball with the writing
The Marvel Cinematic Universe is beginning to show chinks in its armor. 2019’s Captain Marvel I thought suffered from horrible writing. I felt no connection to that film at all and was never excited about it. It was the first straight Marvel dud. Spider-Man Far From Home is supposed to be the finale of all those films that built up to the Avengers and then concluded with Endgame. Unfortunately, it too had some really horrible writing that destroyed what could have been a good film.

The movie focuses upon Peter Parker and his class debate team going on a European tour. Nick Fury shows up and says that Parker has to be an Avenger instead of running after his school friends and MJ. Fury introduces Mysterio who says he is a soldier from the future attempting to stop these monsters called the Elementals from destroying the Earth. There’s a constant tension between Parker wanting to have a teen’s life and his responsibilities of being a superhero in the Avengers, especially after Tony Stark’s died. That latter point is brought up constantly with images of Iron Man throughout and Fury constantly berating Parker about how he has to be an adult and not a kid. This was basically a coming of age theme.

The major problem comes from some horrible writing. For example, After Parker and Mysterio defeat an Elemental in Venice they go for a drink in a bar. There are people all around them acting like two superheroes aren’t sitting with them exposing their secret identities. Some of the comedy works, and other times it’s just juvenile. For instance, Parker accidently sends a drone to kill a classmate while on the European bus tour. To distract people Parker yells “Baby goats” so people look out the bus window while he jumps through a vent in the roof, destroys the drone, and then jumps back in the bus like no one would see him. That’s like a cartoon scene. They keep on having things like this over and over like people won’t mind the suspension of reality and go for these ridiculous scenarios.

It’s not like the whole movie was bad, but there were just too many poor choices mixed in with the good that it wrecked the entire thing.
C
164 people found this helpful

SamKEITHMaxxHeadReviewed in the United States on July 6, 2019
1.0 out of 5 stars
Stay at home
Writing is kiddish, juvenile and Saturday morning cartoon mishaps. It has zero depth to the characters and its just a coming of age fluff that goes nowhere. Just filler and a lot of awkward moments and comedy that doesn't work.
110 people found this helpful

Kindle CustomerReviewed in the United States on September 17, 2019
5.0 out of 5 stars
No movie has ever captured what made Spider-Man popular before Far from Home
Verified purchase
There has never been a Spider-Man movie like there's never been X-Men movie. No movie has ever captured the themes or feel of the X-Men comics that made X-Men important. It hasn't been done. Lots of movies have had 'X-Men' in the title, but they've all been weird Cliff-Notes written by people that never read the source material.

This Spider-Man movie is the first real Spider-Man movie that gets past the first issue of the comics. This is the first movie that actually gets into the most interesting aspects of Spider-Man's story. Being super-strong, fast, agile, and sticky doesn't help you when you're trying to have a human life. Being able to best weirdo, superhuman criminals doesn't make you happy. Spider-Man in his classic sense is one of the most cogent and well-thought-out meditations on the nature of power. Spider-Man Far from Home is the first time that theme is really explored in movies.
46 people found this helpful

jwwReviewed in the United States on July 3, 2019
5.0 out of 5 stars
A whole lot of fun and excitement
I found this really competed with Spider-Man: Homecoming for best live-action Spidey film. Far from Home is equivalent to an amusement park ride, just an onslaught of entertainment.

The story takes a different path. Spider-Man/Peter Parker (Tom Holland), whose past films have been intertwined with New York City, finds himself on a trip across Europe, resulting in some really scenic visuals. (There is one scene in the Netherlands that is just superb.) Also Peter Parker is on a higher tier of crime fighting, and it's a decent story arc as he has to deal with it.

There are a couple of moments where this movie did some surprising things. Dealing with the events from Infinity War and Endgame is done surprisingly well. Be sure to watch through the entire credits. Trust me.

The entire film, like the last one, is pretty funny. More time is spent focusing on Peter's classmates and other supporting cast and they all really shine. At times, the high school rom-com part of this movie can dominate the superhero part, and I really didn't mind. Also glad we got Happy Hogan, who continues to sort of be Spider-Man's handler, and I'm glad that Jon Favreau's still willing to play the role given his busy directing career.

As with most MCU movies, the effects and visuals really stand out. There are a couple fights that are fairly different from past Marvel films.

I'm both surprised and pleased that they managed to translate Mysterio's costume to film, dome helmet, eye-pyramid cape clasps, . It's just that superhero films have historically cared less about accurately maintaining villain outfits and between this and Aqua Man, it's nice to see a change.

I honestly feel this ties with Homecoming for best live-action film. This is a lighter film, and I honestly can't say this was most experimental or deepest in tone or message. But, this is a movie that just wants to be fun, and it really does that.
64 people found this helpful
See all reviews
Back to top
Get to Know Us
Make Money with Us
Amazon Payment Products
Let Us Help You
EnglishChoose a language for shopping. United StatesChoose a country/region for shopping.
© 1996-2022, Amazon.com, Inc. or its affiliates