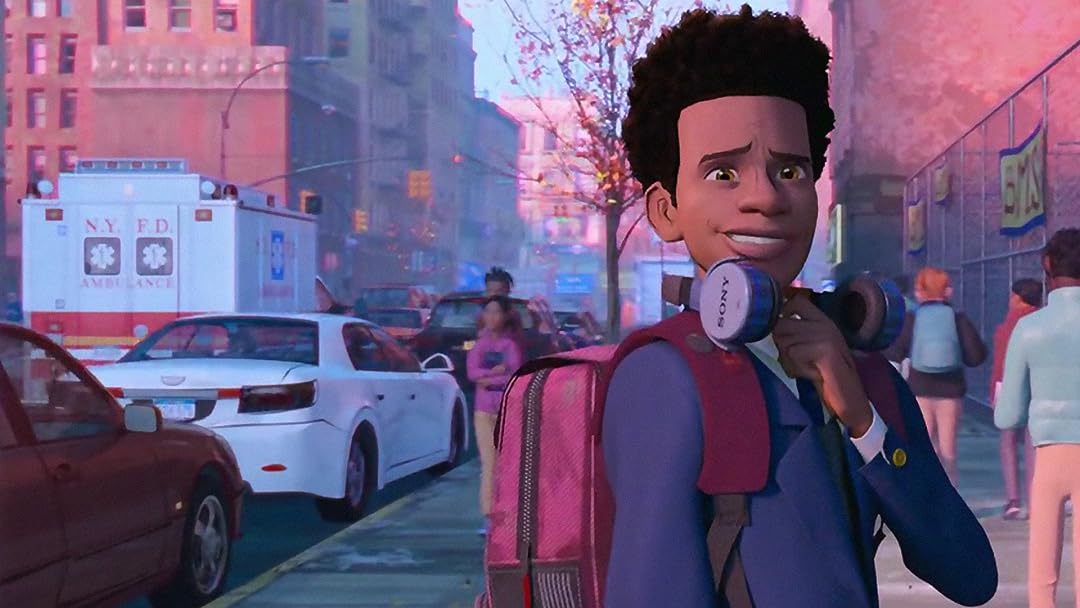 (46,028)
8.42 h 12 min2018X-RayPG
“Spider-Man: Into the Spider-Verse” introduces Brooklyn teen Miles Morales, and the limitless possibilities of the Spider-Verse, where more than one can wear the mask.

BrianReviewed in the United States on February 28, 2019
5.0 out of 5 stars
Prime Video purchase - How to watch bonus features!
Verified purchase
The movie is amazing, there's nothing I can't tell you that other people haven't already said.

I was disappointed to see that the "bonus features" digital purchase only had *one* ten minute feature tacked onto the end! I tried Amazon customer support, but no luck.

I browsed social media and learned that if you watch your Prime Video purchase through the Movies Anywhere app, you get access to all of the incredible extra features, including the brilliant Spider-Ham short film and the amazing 2+ hour Alternate Universe edit of the movie! This works on your computer, phone (although you can't download the bonus features for offline viewing), and FireTV. I'm surprised and disappointed that you can't access all of the bonus content through the native Amazon app and FireTV interface, so I'm posting this to make sure that other people know that you can access everything that you paid for.

DigitalKitsuneReviewed in the United States on December 18, 2018
5.0 out of 5 stars
Remarkable
To start with: I am an enormous Spider-Man fan. Added to this: I am a huge fan of Miles Morales. Now hearing this you may assume that I'd love anything with Spider-Man... and... I mean... you're not wrong. I don't think I outright hate ANYTHING Spider-Man related. But at the same time, no other Spider-Man movie has had me writing reviews on Amazon, Fandango, IMDB, and Rotten Tomatoes singing its praises.

Into the Spider-Verse is (to me)- without a doubt- the best Spider-Man movie yet. And to be fair, if there was ever a movie I was skeptical about, it was this one. Sony Animation-- the same people who did The Emoji Movie and the Smurfs films-- making the first Marvel animated movie?? Was't looking too good... But DANG did they knock it out of the park! Not only are the visuals outstanding-- using 3D animation in an almost unprecedented way where it seriously looks like it is a living comic book-- but the cast, soundtrack, and story are all phenomenal. For anyone who reads the comics, there's plenty of Spider-Man fan service. For anyone who doesn't, there's plenty here to keep you thoroughly entertained throughout. It's got its moments of being down-to-earth, it's got humor, it's got heart. It's definitely a super hero film, but it's also a coming-of-age film.

If you even remotely enjoy Spider-Man, do yourself a favor and check this out!

P.S. Pic is what I wore going to the movie premiere at my local theater (^_^)
585 people found this helpful

David R. MullinsReviewed in the United States on February 28, 2019
3.0 out of 5 stars
Love the movie..... but where's my specials
Verified purchase
This review is not for the movie (Spiderverse is one of the best movies ever, my whole family adores it.) This is a review of the Amazon digital 4k copy. I was very excited to watch the special features with my family. I sprung for the 4k copy thinking this will look amazing on our tv, and there is NO special features. How did I just spend more than the HD version and didn't get any special features? That really pissed me off. How can I exchange this for the version that has special features. Why would there be NO special features, what idiot made that decision? I'm pissed, would be a 1 star review, but the movie is so good.
206 people found this helpful

KarToon12Reviewed in the United States on December 17, 2018
5.0 out of 5 stars
The ultimate love letter to everything Spider-Man
For as much as the Marvel Cinematic Universe has changed and defined the way superhero films are made in the last decade, it can be easy to forget that there WAS a time (back in the early 2000s) where superhero films were made by separate studios, and the concept of a shared universe was unheard of. One of the first movies to kick off the new renaissance of superhero films was Sam Rami's Spider-Man---a trilogy that I grew up with and still holds a special place in my heart. I say all of this because this new animated outing seems to have come full circle, and almost 20 years later, we finally have another self-contained Spider-Man movie that isn't connected to the MCU. Not only that, but it has the ambition to bring together a literal multi-verse of various Spider-Man incarnations, and does so seamlessly in a film that honors all the best qualities of the web-slinger that came before.

Miles Morales, an artistic, half African American/half Puerto-Rican teenager living in Brooklyn, is a huge fan of Spider-Man. Between trying to live up to the expectations of his parents, and struggling to fit in at his new boarding school, his life is turned even more upside down when he's bitten by a genetically modified spider, and gains spider-like powers. Soon after, he stumbles across a secret laboratory and their science experiments being run by the Kingpin of crime, Wilson Fisk. Their plan? To use a particle accelerator to access alternate realities. Spider-Man arrives to deactivate the machine, but in the ensuing battle, the accelerator malfunctions, and Spider-Man is tragically killed. Inspired by the hero's sacrifice, Miles begins to try and become a costumed crime fighter himself.....and soon runs into a very much alive Spider-Man. But not the one that died. Turns out, when the accelerator malfunctioned, it opened up doorways to other realities, and now multiple versions of Spider-Man are running around in Miles' universe. Now, with the help of a whole team of spider-powered-people, Miles will have to stop the Kingpin, put everyone back in their proper dimensions, and shut down the accelerator before the very fabric of reality is destroyed....and in the process, he'll learn what it truly means to not just be a superhero, but to be Spider-Man.

From the summary above, this may sound like a lot to take in, but amazingly, every character and plot point is juggled fairly well. Each spider-person is given enough screen time and handled in such a way that you're easily able to understand their personalities and backstories in just a few short expositions. This is perfect for an audience who may be unfamiliar with these alternate takes on the wall crawler. (I myself knew most of them, or had at least heard of them, but am now interested to check out their respective books.) And each one of them is drawn in a slightly different style that reflects the universe they came from. The animation is nothing short of incredible, with eye-popping colors, and a style that blurs the lines between traditional, stop-motion, and CGI----a type of art mixture I've never seen utilized before that perfectly evokes the feeling of reading a comic book (right down to panels, thought balloons, and sound effects appearing on screen).

Each of the spider-heroes are their own unique person, though each one contains a reflection of Peter Parker's heroic personality. Spider-Ham, Spider-Man Noir, and Peni Parker (from an animal, 1930's black and white, and anime universe respectively) get some of the funniest lines, though get the least amount of screen time in comparison to Spider-Gwen (from a universe where Peter's girlfriend, Gwen Stacy, got powers instead). Though Gwen sort of becomes a bit of a love interest for Miles, the romance aspect is heavily downplayed in favor of just telling a good origin story for Miles. The plot moves at a fairly fast clip, but this is mostly due to the viewer being dropped into Miles world---a world that's already lived in with its own backstory and adventures that've already happened. If you're a heavy comic reader, then you'll understand all the references. But if you're not, enough context clues are given that even newbies to the "ultimate" comics universe won't be lost. Although, the Kingpin is probably my only nitpick of the film. I'm so used to seeing him as a Daredevil adversary, it's easy to forget he actually started as Spidey's nemesis. And unless my comic knowledge isn't up to snuff, I don't think he typically deals in such scientific experiments (especially not dimension hopping). He's primarily a street crime boss, and to see him screwing around with alternate realities is a bit jarring to me (though his reasoning for doing so IS within his character). And the Peter of Miles' dimension is arguably the most well adjusted, well liked, and competent version of Spider-Man ever seen (with hilarious nods and references to the Sam Rami films).

Ultimately, the main story belongs to Miles and the alternate Peter Parker; both of whom are forced to go on a journey of self improvement, and help each other in doing so. This Peter is the total opposite of the Spidey that Miles knows. In his world, his life has taken a downward spiral, from losing his job, to his Aunt May, to his marriage with Mary Jane, leading to him having virtually given up being Spider-Man. But when he sees how scared and alone and inexperienced that Miles is at using his newfound powers, Peter reluctantly has to become Miles' teacher. And in doing so, he slowly gains the confidence he needs to reclaim his life and move forward. And through his experiences with the other spider-heroes, Miles learns how to come out of his shell, believe in himself, and decide what kind of person he wants to be.

Part origin story, part sci-fi epic, part homage with easter eggs galore, this is a fun and inspiring adventure that serves as the ultimate love letter to anything and everything Spider-Man related. It's one of the most stylistic and unique films I've ever experienced, and anyone who loves Spidey, superheroes, and comic books owes it to themselves to see this.
204 people found this helpful

Amazon CustomerReviewed in the United States on February 27, 2019
5.0 out of 5 stars
Is this the 3D version?
Verified purchase
Love this movie. Cant recommend it enough! 10/10 buy.
BUT.... i really didnt like how blurry the whole thing is. I cant tell if it was a style choice, or if the version i just bought and watched on Amazon is actually the 3D version. Did anyone else have this issue? To me, it looks like im watching a 3D movie with no glasses..
122 people found this helpful

Jonan ZelayaReviewed in the United States on March 21, 2019
5.0 out of 5 stars
An amazing story of spidey for this generation!
Verified purchase
I’m a lifelong spidey fan and I don’t even care this wasn’t done in 3D. With that being said this movie was awesome! A true love letter to our friendly neighborhood Spider-Man. Definitely worth the buy and my son couldn’t stop talking about when we saw it in theaters.
88 people found this helpful
See all reviews
Back to top
Get to Know Us
Make Money with Us
Amazon Payment Products
Let Us Help You
EnglishChoose a language for shopping. United StatesChoose a country/region for shopping.
© 1996-2022, Amazon.com, Inc. or its affiliates