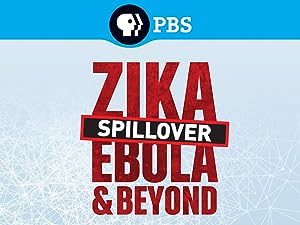 Season 1
(18)2016TV-PG
Zika and Ebola—like rabies, dengue, and other killer viruses—reside in animals and spill over into humans. Today, spillover diseases are more common, and we are more vulnerable. Now, scientists are on the hunt for deadly diseases, hoping to stop them before they spill over and spread out of control. It's not a question of if another outbreak will strike, but when? And will we be prepared?

Episode rentals include 30 days to start watching this video and 3 days to finish once started.

John P. Jones IIIReviewed in the United States on December 8, 2019
3.0 out of 5 starsThe next global pandemic…
I have a number of problems with this PBS documentary, which was released in 2016. First and foremost, it takes the lead word in its title, “Spillover,” from David Quammen’s 2013 book: “Spillover: Animal Infections and the Next Human Pandemic.” But it never once mentions this, nor interviews the author. It is a book that is rising to the top of my list of essential reads.

There are a number of important aspects to this documentary. First and foremost is that it exists and is at least an effort to educate the public on a threat, far greater than war, international or domestic terrorism, random murders or even the drug abuse epidemic, that is likely to kill them. Dr. Thomas Frieden, the former CDC Director, a prime source in this documentary, does not equivocate: there is a 100% chance that another global pandemic will be caused by a “spillover” of a disease from the animal kingdom. I fully agree. In the last half century, the number of “spillover diseases” has quadrupled. Though only mentioned in passing, HIV/AIDS is one that is still on-going, and has killed 40-50 million people.

As reflected in the title, the documentary largely focuses on humankind’s experience with the Zika and Ebola viruses. The illness caused by Ziki was generally considered to be mild, not much more than a cold, except, when it came to pregnant women, where it would invade the fetal brain, destroy tissue and cause permanent damage to the baby. Numerous very sad segments were shown in Brazil of mothers with their infants who had microcephaly, a permanent deformation of the skull. Ebola has been with humankind for quite a while. It did, however, explode into a real public health threat in three countries in West Africa: Liberia, Sierra Leone, and Guinea, with “patient zero” determined to be a two year old boy, who died December 13, 2013, with numerous relatives, as well as hospital workers, succumbing shortly thereafter. The documentary also covered the Nipah virus, found in Bangladesh, with the transmission vector being raw date sap, considered to be a delicacy there, being harvested between December and March each year. Bat urine can contaminate the sap. Hum.

The documentary briefly mentions that the growth in human population is a significant factor in increasing the frequency and future prospects for the next pandemic. One interviewee said he was born in 1948, when the global human population was 1.6 billion (Google provided another estimate of 2.5 billion). Today it is approximately 7.3 billion. The pressing of human population against animal habitats increases the likelihood of the transmission of what is called zoonotic diseases (from the animal kingdom).

Of the other serious problems I have with this documentary, there is the failure to include humankind’s experience with the penultimate pandemic, the influenza of 1918-19, that killed at least 3% of the world’s population. In addition, the documentary never mentioned how wars and “political considerations” can greatly facilitate the spread of the disease. And the documentary never mentioned that the leading “expert,” Dr. Frieden, demonstrated egregious failings in dealing with public health issues, particularly the Ebola virus. While I strongly believe that we should be cognizant of the historical antecedents, there remains the classic dilemma posed by the observation that the generals frequently train the troops to fight the last war, without considering how the next one might be different.

Repeatedly in this documentary, there is the use of a graphic showing the spread of the Ebola virus from its epicenter, the juncture of the borders of Sierra Leone, Guinea, and Liberia. Only poverty seemed to be the major contributing factor. True, these countries are some of the poorest in the world but it was never once mentioned that the civil wars that had ravaged these countries for at least a decade had essentially destroyed any meaningful public health care processes. Quick – name other places in the world like that today! Certainly Libya, Syria and the Yemen would be on the list, with Afghanistan and Iraq being in contention also. Just too dangerous for international public health workers to go and too dangerous for indigenous public health workers to functioning effectively. And the on-going willingness of western countries, particularly the United States, to accept refugees from these countries, with essentially no public health screening, makes Dr. Frieden’s 100% estimate, well, 100% true.

It would have been instructive for the documentary to have examined Dr. Frieden’s own failings in dealing with the Ebola epidemic. He had talked President Obama into personally appearing in a video to reassure the people of West Africa that it was impossible to catch Ebola by sitting next to someone on a bus. But in the United States he implemented measures due to his belief that one could catch it by sitting next to someone on an airplane. The CDC, of which he was the Director, blamed the American nurses, who contracted the disease, for not “following protocols.” The American Nurses Association had to point out that there were NO protocols! President Obama let it be leaked to the New York Times that he was “seething in anger” at the CDC over the handling of Ebola. And what of quarantine, which, as the documentary points out is mentioned in the biblical book of Leviticus? In Congressional testimony Dr. Frieden said that a quarantine should not be imposed; rather he posited that a system whereby travelers would “self-report” symptoms of the disease. One Congressman had a good aide who had done the research, and the Congressman read back to Dr. Frieden his own words from a medical conference on how 25% of patients do not truthfully describe their medical symptoms to their physicians, and another 20% do not properly take their medications. His response was only an embarrassed grin.

To prepare for the next war… the next pandemic, of 100% certainty, we truly must learn from the failures of the past, including those of the “expert” in this documentary on such an important subject. Overall, 3-stars.

David JordanReviewed in the United States on May 4, 2021
4.0 out of 5 starsHere is an Ideal
With Global Travel being what it is today, Temperature checking should be required 24/7 from now on at all Major Transportation hubs. Just like at one time some Baggage was x-rayed, but now all of it is. So to should Temperature screening be done. At the very least on all International Travel.
Report abuse

LTC SHMUEL ROSENFELDReviewed in the United States on May 27, 2018
5.0 out of 5 starsPopulation Control
could happen every land mass, in your front yard
One person found this helpful
Report abuse

ShawnReviewed in the United States on November 16, 2018
5.0 out of 5 starsGreat Documentary
Well worth watching. Very interesting.
One person found this helpful
Report abuse
See all reviews
Back to top
Get to Know Us
Make Money with Us
Amazon Payment Products
Let Us Help You
EnglishChoose a language for shopping. United StatesChoose a country/region for shopping.
© 1996-2021, Amazon.com, Inc. or its affiliates