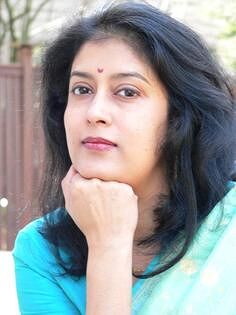 by Indu Sundaresan (Author)
4.2 out of 5 stars 56 ratings
See all formats and editions
Sorry, there was a problem loading this page. Try again.
Arriving in the west India state of Rudrakot where he hopes to find his idealistic brother, who went missing after joining the local struggle for independence from the British, wounded World War II army captain Sam Hawthorne finds his search complicated by his love for the daughter of a political agent. By the author of A Feast of Roses. 35,000 first printing.
Read more
Previous page
Next page

Sundaresan (A Feast of Roses) returns to her native India for a sprawling story of forbidden love set against the backdrop of WWII and the struggle for Indian independence. U.S. Army Capt. Sam Hawthorne comes to the small kingdom of Rudrakot in the Sukh desert of western India, ostensibly to recover from an injury suffered during a rescue mission behind Japanese lines in Burma. Sam has secrets, however. He's a spy, a member of the fledgling OSS, and he's looking for his brother Mike, who disappeared while serving in a local regiment, the Rudrakot Rifles, where "even his name was false." Complicating matters, Sam has a brief but torrid affair with Mila, the daughter of the kingdom's Indian political agent, who is betrothed to the local prince. As Sam plots to free his brother from a nearby detention center, Mila's brother Ashok becomes involved in a nationalist plot to bomb the car of the local British representative in Rudrakot. The myriad subplots and some overwriting detract, but Sundaresan renders Rudrakot vividly and the sympathetic (if doomed) characters generate enough friction to keep the pot boiling. (Sept.)
Copyright © Reed Business Information, a division of Reed Elsevier Inc. All rights reserved.

Indu Sundaresan, born and raised in India, came to the United States for graduate studies and is the author of The Twentieth Wife and The Feast of Roses. She lives in the Seattle, Washington, area. Visit the author's website at www.indusundaresan.com.

Indu Sundaresan was born and brought up in India, on Air Force bases around the country. Her father, a fighter pilot with the Indian Air Force, was also an avid storyteller--as was his father, Indu's grandfather. She grew up on their stories on various themes--Hindu mythology and fictional tales of an elephant and a horse living in the wilderness.

She came to the U.S. for graduate school at the University of Delaware and has two degrees; an M.S. in operations research and an M.A. in economics. But, the storytelling gene beckoned and she began writing soon after graduate school.

The Twentieth Wife (2002), based on the life of Mehrunnisa, Empress Nur Jahan, is the tale of one of India's most powerful women. This was her first published novel, but the third one she wrote--the first two still languish on the hard drive of some forgotten old computer and are never to be revived; they were practice runs and taught her how to write a novel.

All of Indu's work has been published, in hardcover and paperback, in the U.S. by Pocket Books/Atria Books/Washington Square Press--imprints of Simon & Schuster. Her work has been translated into 17 languages to date.

Linda Linguvic
HALL OF FAME
5.0 out of 5 stars Life and love in 1942 India. Great storytelling!
Reviewed in the United States 🇺🇸 on January 14, 2011
Verified Purchase
The year is 1942. The world is at war. The Japanese are in Burma. India, while still part of the English Raj, is feeling the beginnings of revolution. In the middle of this simmering scenario is a love story so well told and integrated into the historical detail that I wasn't bored for one moment. The book's narrative takes shape in the form of a young American woman discovering her history when an old trunk arrives on her 21st birthday. As she reads the enclosed letter, the reader is transported back in time.

Mila is a young Indian woman who is torn between two loves, one for the Prince who it is expected she will marry, and one for the strange American soldier who comes in to her life. He is searching for his brother who is imprisoned in India but all of this must be kept secret. Mila's father is a diplomat employed by the English, her younger brother is attracted to the seeds of Indian revolution and her older brother mistakenly thinks that the English are his friends.

This book is more than the sum of the plot and the lush setting however. And even though I have read some non-fiction about the British rule in India, those were just facts. This book made me actually "feel" it, especially from an Indian point of view. There was a lot of dependence on the servant class. And the roles of both men and women were starting to change in small ways. The author brought out how it felt for Indians to be dominated by the English and how prejudice disempowered them. Before a dust storm there is silence, and this fact is carefully interwoven in the theme of the book. The reader is not spared the horror of war however; there were parts of the book that made me cringe. The love story between the couple was done well, but the story of India and its people were what glued my eyes to the page.

Once started, this book is hard to put down. It's about life and love and a time and a place that will forever live in my mind. And there were also several surprises throughout which anchored my interest even more. Highly recommended.
Read more
One person found this helpful
Helpful
Report abuse

Charla Harris
4.0 out of 5 stars Interesting love triangle with many East Indian social issues prevailing
Reviewed in the United States 🇺🇸 on July 12, 2013
Verified Purchase
The book held my interest especially the cultural differences of the WWII India. The twists, sub plots, and the spirituality of the book very enhancing to the story.
Enjoyable reading with an open mind.
Read more
Helpful
Report abuse

Sheryl L. Kingman
4.0 out of 5 stars Splendor of Silence
Reviewed in the United States 🇺🇸 on July 20, 2010
Verified Purchase
The book came in a timely manner, and was in decent shape. It came as advertised.
Read more
Helpful
Report abuse

Lamoine E. Dionne
5.0 out of 5 stars A GREAT READ
Reviewed in the United States 🇺🇸 on March 31, 2008
Verified Purchase
I highly recommend this book. It is a book that returns to the present occasionally, but not so quickly that you get lost. I TOTALLY loved this book and the characters were so alive. i can only add that I am an avid reader and I would never give a book high ratings, if it did not deserve them. This is a book I will probably read again, and any others that this author writes. Kudos to the author.
Read more
One person found this helpful
Helpful
Report abuse

NBN
5.0 out of 5 stars Beautiful story!
Reviewed in the United States 🇺🇸 on June 19, 2013
Verified Purchase
I picked up this book because the cover was so beautiful and the title intrigued me. I couldn't put it down because it was so good! I ruined and had to throw away my original copy but wanted to keep a copy in my collection so I ordered a new one.
Read more
Helpful
Report abuse

LadyLilac
5.0 out of 5 stars Gem of a find
Reviewed in the United States 🇺🇸 on December 3, 2010
Verified Purchase
I absolutely adore this author! She has the ability to transport the reader to centuries past and to places I haven't even been to before, yet make everything seem familiar. Ever since I picked up one of her books, I haven't been able to stop searching for and reading her other novels. Truly, a gem of a find!
Read more
Helpful
Report abuse

TechGal
2.0 out of 5 stars Couldn't stick with it
Reviewed in the United States 🇺🇸 on December 30, 2012
Verified Purchase
The book has its good points, but it was too tedious, overly dramatic and plodding for me to stick with it.
Read more
Helpful
Report abuse
See all reviews

Zarin Avari
5.0 out of 5 stars Forbidden Love
Reviewed in the United Kingdom 🇬🇧 on March 20, 2015
Verified Purchase
Indu Sundaresan is a prolific writer. I have really enjoyed her books.
The Splendor of Silence is very interesting and at times quite sad. It opens with Olivia, daughter
of Sam and Mila, receiving a trunk from India. There is a letter for her from Jai who loved her mother and married her.
Mila loved Sam but circumstances separate them. The background is India at the outset of getting its independence.
Really interesting for those readers who love India.
Read more
Report abuse

Arshi
4.0 out of 5 stars Great Buy
Reviewed in the United Kingdom 🇬🇧 on May 28, 2013
Verified Purchase
Book came on time and in good condition. I have yet to read it though. It was highly recommended by a friend who thinks its a good read.
Read more
Report abuse