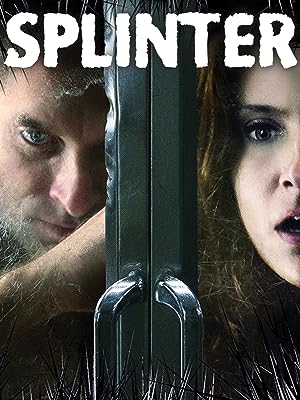 (1,758)
6.11 h 22 min2008X-RayR
Trapped in an isolated gas station by a voracious Splinter parasite that transforms its still living victims into deadly hosts, a young couple and an escaped convict must find a way to work together to survive this primal terror.

Hoping to enjoy a romantic anniversary camping trip together, Polly (Jill Wagner; Blade: The Series, Teen Wolf) and her biologist boyfriend Seth (Paulo Costanzo; The Expanse) are carjacked by on-the-run criminals Dennis (Shea Whigham; Death Note) and Lacey (Rachel Kerbs). In transit a roadkill event causes a flat tire, and a curious splinter sets an interesting tone as they find themselves stranded at a remote gas station.

If you’re gonna’ make a not-so-big budget one-set horror movie, a remote gas station strikes me as a good frugal choice. But how nice is it that gas stations are a classic harbinger check point in so many films? From Wrong Turn (2003) and Tucker and Dale versus Evil (2010) to The Cabin in the Woods (2012), the gas station is usually where victims have the opportunity to heed the harbinger’s warning and avoid the evils ahead. Yet here, it is upon arrival that they are doomed… because the harbinger was already a victim!

Our monster is a botanical parasite that metastasizes in the blood stream to induce twitchy zombiism. The first victim is the gas station attendant (Charles Baker; The Neon Demon), who thrashes and contorts his mangled limbs, a marionetted host to the splinter monster.

Early encounters with the monster are deliciously macabre as a freshly flattened roadkill slug-crawls towards an intended victim. We see the infectious splinters probe about like the prongs of a sea urchin. It’s REALLY cool. Infected zombie-like animated bodies flailing undexterous limbs, and disembodied hands twitch like something out of Bride of Re-Animator (1989). Everything looks great and, given the premise, the delivery is shockingly credible.

Despite the often choppy editing—most likely to disguise any flaws in the practical monster suit—this remained goretastically effective, engaging and exciting. These special effects are nothing to scoff at… actually, I was quite impressed. The blood work is excellent—and the blood splattering is kinda’ chunky! The animated bodies are disturbing, the stop-motion severed hands are a joy, and the brutal limb breaks will catch you off-guard.

When we see the “final monster” it’s only for a second at a time; we see it often, but only in these glimpses. It’s a macabre amalgam of randomly attached bodies/parts similar to the new The Thing (2011), the end of Terrified (2017),the final queen roach monster in The Nest (1988) or Zygote (2017).

When films put all their eggs in the monster basket, we tend not to expect much overall. Perhaps a few obscure creature sightings and a gory death scene in the first hour, followed by a hopefully redeeming monster-rich finale—all surrounded by weak writing and acting. Director Toby Wilkins (The Grudge 3) delivers a very respectable film. His characters are well-written and performed affably yet credibly. I don’t think I have a single negative criticism of this film! I just… loved it!

T. LarsonReviewed in the United States on May 25, 2021
3.0 out of 5 stars
Some elements are good, some are very, very bad
Verified purchase
The effects, when they aren't under the effect of MASSIVE shaky cam, are decent. The acting is, for the most part, also ok. However, I HATE, "Seth" the utterly useless "husband" or cuck whatever he is. The actor does a good job acting the part of a horrifically bad and comically incompetent "smart" man. He's intolerable as a concept and the does a good job making you hate him.

Despite some of the interesting aspects there are some very poor decisions are made by the characters in typical horror fashion. The "bad guy" and girl are a decent team.

It doesn't deserve the 5 stars some people are giving it because it's lacking too much to get that. However, it does deserve at least 3 for giving us something slightly different to look at.
9 people found this helpful

Richard JensenReviewed in the United States on June 7, 2021
3.0 out of 5 stars
Not the worst thing on Prime, but you'll get vertigo
Verified purchase
This could have been a five-star horror flick, but they totally ruined it with hyper-jerky camera work throughout all of the scenes that mattered. If a producer doesn't have enough confidence in their creature-effects to use normal cinematography that doesn't give the viewer vertigo, then more money should be spent on the creature-effects! You don't fake it by jerking the camera all over the place.

That said, creepy and well-acted most of the time. So, this could have been a real winner. Sadly, the endless camera-jerking was just too distracting.
6 people found this helpful

someguyReviewed in the United States on June 8, 2021
2.0 out of 5 stars
Alost a B movie
Verified purchase
This is pretty terrible. I like B movies, but this falls short of even a B rating.
On the bright side, the acting is not terrible, the audio is not bad, and what little we see of the creature is good. But most of the shots of the creature are spoiled by the jerkiest, fuzziest camerawork I have ever seen. I assume they shot their footage, and realized that their creature looked silly. So they "solved" that by shaking the camera back and forth, up and down, and for good measure also defocused the camera, and added a strobe light. It's the cheesiest, shakiest, fuzziest thing I have ever seen, and I do watch a lot of crappy movies. 2 of 5 stars but that's me being generous.
6 people found this helpful

CassandraReviewed in the United States on October 10, 2016
4.0 out of 5 stars
Surprisingly worth watching!
Verified purchase
I picked this movie at random off of Amazon Prime, I love checking out random horror films that I’ve never heard of before. I wasn’t really expecting too much out of this one, I sort of expected that it would end up being some low budget B movie that’d I turn off after 10 minutes because it was so poorly done. Not the case with this movie!

It took about 10 minutes before I really got into this movie, and then I couldn’t really look away. It has some interesting looking gore, and a few images that you don’t really see that often in horror films. The acting was well done and believable. I really liked the special effects of the creature, super creepy images that’ll stick in my mind.

All in all, this one is worth checking out if you’re an avid fan of the Horror genre. It’s definitely a movie I’ll be wanting to purchase.

samgardnerReviewed in the United States on June 25, 2021
3.0 out of 5 stars
Neat creature; poor execution
Verified purchase
The best thing about this movie is the concept for the monster -- essentially a killer "splinter" fungus/mold that turns its victims into monstrous, mindless hosts to further spread itself. The monster itself was scary and stomach-turning.

Making one of the lead characters a biology PhD student was a good idea, but never really utilized to its fullest.

For me, one of the worst things a movie can do is elucidate a concept and then ruin its execution, though. And there's a lot of ruining here.

Let's start with as soon as the main characters realize they're dealing with a fungus/mold, fire should seem like the obvious solution. Burn it (as in SO many horror movies). The idea that mold spores can travel through the air never seems to occur to the writers, and even after they elucidate that the thing tracks its victims by body heat, the solution they come up with is far fetched. And even though they know it has no eyes or ears and that its body isn't what's important, they persist in shouting at it to get it's "attention" and shooting at it.

Acting is passable, even good for this level of film. Dialogue is also written decently well.
One person found this helpful

Geoffrey F. ArnoldReviewed in the United States on June 10, 2021
4.0 out of 5 stars
Surprisingly fun watch.
Verified purchase
Okay, films like this can often go south very, very quickly. Thankfully, this one actually stayed on track and delivered the goods on the whole.

The acting was decent enough to be acceptable. The characters were well defined, and you really did not like Seth as the film unfolds...until he actually begins to "man up". The actor did a good job making you find the character worthless as the story opens up and moves forward. But he gets his redemption, too.

The bad guy was very well played, actually. The actor defined him, and inhabited the character very believably, interestingly enough. Actors often love to play bad guys because they can be so colourful. There's a lot of room to define the character and the malevolence level you want to inject.

The girl was played smart and she was pretty well defined as a character as well. You did wonder what she saw in the dweeb. But after this experience, the dweeb actually showed promise as a worthwhile guy to be with. And of course she would find him more attractive as a result. Well, love is blind, right.

Overall a great story. Stayed focused on the reason the film exists. It is, after all, a survival story. And it delivers on that.

Because of the foul language, particularly early on, we knocked a star off. Look, some language is understandable, but when it is being spewed out every other word, in every sentence, it just becomes unlistenable. Yes, I know that some people actually talk like this, but that doesn't mean I want to hear it in dialogue in a film. You really begin to see how offensive it is to hear it so much in someone's speech.

Anyway, apart from that, we actually enjoyed the whole storyline because it told the story well and didn't throw in weird plot twists and things that made no sense.

Look, in stories like this, you also have to just let go and enjoy the ride, ignoring any implausible things that may crop up...as long as there aren't too many of such things thrown in. Then it just shows bad writing and execution. That didn't happen here. Kudos!
One person found this helpful

Amber WReviewed in the United States on December 1, 2019
4.0 out of 5 stars
Better than expected. Definitely worth watching.
Verified purchase
I really liked this one. The writing and acting actually drew you into the characters, they felt fleshed out and relatable. The situation, the fear, the developing relationship between the characters, it was well written and well acted. The overall story arc was not unexpected, but neither was it disappointing

They didn't overburden the movie by trying to go in depth about the origin, though a possibility was hinted at. It had just the right balance of good acting, decent effects, properly placed humor, and well done horror, without an overuse of jump scares or gore (despite definitely having gore).
4 people found this helpful
See all reviews
Back to top
Get to Know Us
Make Money with Us
Amazon Payment Products
Let Us Help You
EnglishChoose a language for shopping. United StatesChoose a country/region for shopping.
© 1996-2022, Amazon.com, Inc. or its affiliates