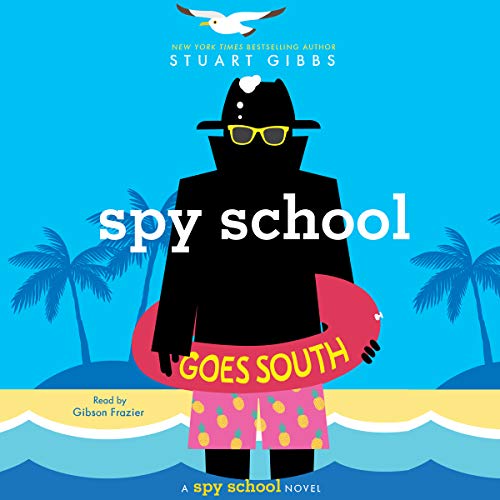 Ben is taken to Mexico by his nemesis in the hopes that he’ll finally be able to take down SPYDER in this latest addition to the New York Times best-selling Spy School series.

Thirteen-year-old Ben Ripley has been caught in the snares of SPYDER more than once and knows well enough to be suspicious of anything that seems too good to be true - despite needing special tutoring in advanced survival techniques. So when Murray Hill finally breaks his silence with an offer to hand over the SPYDER elite, Ben knows there must be something going on. But his hesitation doesn’t stop the assignment.

The mission: Follow Murray Hill to an undisclosed location with no one else but Erica Hale to identify SPYDER leadership. Once found, contact the CIA to sweep in and finish the job. Do not contact SPYDER directly.

However, as Ben suspected, nothing goes as planned, and what should be an easy mission quickly turns deadly. Now, Ben and Erica will have to face rogue agents, trained killers, and even very hungry crocodiles in a race against the clock to find out what SPYDER is up to this time - and thwart their evil plans.

Amazon Customer
1.0 out of 5 stars Sad to see a favorite author get political in a children’s book
Reviewed in the United States on November 12, 2018
Children’s books should stay out of political topics, period. My child has loved Stuart Gibbs and all his books, however Mr. Gibbs choosing to dive into propaganda with his latest piece of work means the last book of his that will be allowed in our home. Thankful we checked this one out from the library and can return it! Parents, be warned: this is one you’ll need to preview and be sure it is in line with your political views before allowing your child to read it.
Images in this review

Sheila Gallagher
5.0 out of 5 stars Series just gets better
Reviewed in the United States 🇺🇸 on May 3, 2021
Verified Purchase
This time Ben and Erica go after SPYDER in Mexico. Murray tries to ingratiate himself into their good graces. And Erica needs to call in back-up.

I loved this story. This series just keeps getting better. The junior spies learn how to stand on their own two feet without having adults helping them. They do well. Better than the adults. Truths are revealed. I went along for the ride and enjoyed every minute of it. So much happens. So many things are overcome. I liked their inventiveness as well as Ben thinking back on his and Erica's past and realizing he and she are at cross purposes and he's not sure he cares. Ben's thought processes are interesting but without Ben they would not have figured out what SPYDER was up to and could not, as they always have, thwart them. It's not with finesse but it works.

Looking forward to reading the next book.

Amazon Customer
5.0 out of 5 stars Another amazing book
Reviewed in the United States 🇺🇸 on June 20, 2022
Verified Purchase
Again one of my favorite books I've EVER read. It was just amazing. I can't wait to read the others.
Read more
Helpful
Report abuse

Hope-Librarian
5.0 out of 5 stars Stand by for adventure, action, and sly humor
Reviewed in the United States 🇺🇸 on October 4, 2018
Verified Purchase
This book will keep you riveted. Ben, a 13-year-old junior agent at the Academy of Espionage (think CIA) is a good kid who always tries to do the right thing. He’s probably not the perfect spy student; he’s not great at physically protecting himself, or shooting guns, or computer hacking… but he’s kind of brainy. He can put pieces of information together and make the connections. And he’s got guts when it counts. Ben has already helped his spy school solve problems in previous books (5), but I haven’t read them and did just fine with this book. Here, Ben is asked to help locate their enemies of the covert organization, SPYDER. Of course he says yes, but it’s not that simple. He’s plunged into all kinds of scary situations in a Mexican jungle, and things just keep getting worse.

Think of your plane being targeted by a missile, or having hungry crocodiles surround you, or discovering a nefarious plan to accelerate rising oceans and sink cities around the globe. Ben has some solid friends, though, and each has their own special spy skills which come in handy. Still, the author is sly; you might wonder, does ‘goes south’ in the title refer to a country south of the U.S., or does it refer to the expression that means things get very bad, or even that the school is no longer providing a safe haven for spies in training? Hmm. If you’re in grades 3-7 and you like adventure with amusing situations, this is for you. Also, read the author’s suggestions at the end. We can take care of our planet; each person can make a difference.
Read more
11 people found this helpful
Helpful
Report abuse

Katan
5.0 out of 5 stars Quaity Read
Reviewed in the United States 🇺🇸 on October 18, 2021
Verified Purchase
There is a very thin line between love and hats. Likewise with humor and suspension. My man Stuart nailed right in the middle. Unlike most books the characters are very constant with their personalitys. Gorgeous plot, everying flows like honey. The sad parts cut through your heart like a hot knife through butter. The ending is more satisfying than getting a swish in a basketball hoop. I've read it multiple times over and over. Great book for late night reading, or for anytime for some good laughs. I'd recommend this book to 5-8th graders (girls and boys alike).
Read more
Helpful
Report abuse

newton
5.0 out of 5 stars LOVED THIS BOOK! JUST HATED THAT HE GOT POLITICAL
Reviewed in the United States 🇺🇸 on February 25, 2021
Verified Purchase
Now don't get me wrong. Me and my entire family are fairly concerned about the climate change problem. But the fact that he put a political messge in the end of a childrens book is

However, do not classify climate change as a "socialist hoax." You should still read books from Stuart Gibbs. I am with the author, and I do not believe that kids are too young to understand the problem of climate change. EVERYONE needs to know about this. I have had enough about everyone telling me that climate change is false. And I'm not the only one. 97% of scientists agree with me too. So please don't listen to the far-right news channels. Listen to the officials. I voted republican since '89. However, I voted democrat in 2020 because of this issue.
Read more
2 people found this helpful
Helpful
Report abuse

Lindsay
5.0 out of 5 stars Great book!
Reviewed in the United States 🇺🇸 on March 17, 2022
Verified Purchase
This is such a fun series! I couldn’t put this book down, and I am looking forward to reading the next book in the series!
Read more
Helpful
Report abuse

K. Williams
5.0 out of 5 stars Entertaining for all
Reviewed in the United States 🇺🇸 on March 12, 2022
Verified Purchase
We love Stuart Gibbs! Mom & boys age 9 & 12. Our only wish is that there are more spy school books!
Read more
Helpful
Report abuse

IzzyTheWizard
5.0 out of 5 stars NOT POITICAL!
Reviewed in the United States 🇺🇸 on March 24, 2021
Verified Purchase
Im going to give it 5 stars because it was a great book with an engaging storyline.
it was slighty off stuart's usual excellence, though i dont know exactly why.
the bit at the end could've left out trump's name as to not provoke his supporters but
it was a well rounded book!
dont know why its not listed as part of the series on kindle though.
Read more
Helpful
Report abuse
See all reviews

jacquif
5.0 out of 5 stars part of a fab series
Reviewed in the United Kingdom 🇬🇧 on October 14, 2019
Verified Purchase
my son has loved all the books in this series - can't comment on this one as bought it for his birthday which is not till next week
Read more
Report abuse

NS
5.0 out of 5 stars 11yr old days fun and easy reading
Reviewed in Canada 🇨🇦 on November 9, 2020
Verified Purchase
My 11 year old son, finished every available book in this series in no time, as he could barely put them down. He recommends this series for starting at 7/8 year olds as it is very fun and easy reading. He did provide the disclaimer, that there are made up words that may confuse young readers just developing their language skills.
Read more
One person found this helpful
Report abuse

GKM2015
4.0 out of 5 stars Great series. Only one slight problem with some things.
Reviewed in Canada 🇨🇦 on October 2, 2018
Verified Purchase
Let's just start off by saying this series is amazing. The plots are always elaborate and sometimes difficult to figure out. The characters are all complex and cool in their own way. Especially Erica. Honestly don't like the fact that Ben has a crush on Zoe. I'd like to have seen a bit more of Catherine and what transpired after SPYDER was thwarted. One last thing I'd really really wanna see would be simple. Just single chapter told from Ericas perspective. Where we could get in her head and understand her character.

Either way great series wonderful read.
Also how many books will be in this series
Read more
One person found this helpful
Report abuse

Amazon Customer
5.0 out of 5 stars Great book series
Reviewed in Canada 🇨🇦 on June 25, 2019
Verified Purchase
My 10 year old loves these books. keeps him interested instead of video games. Can't wait for the next one to be published.
Read more
Report abuse
See all reviews