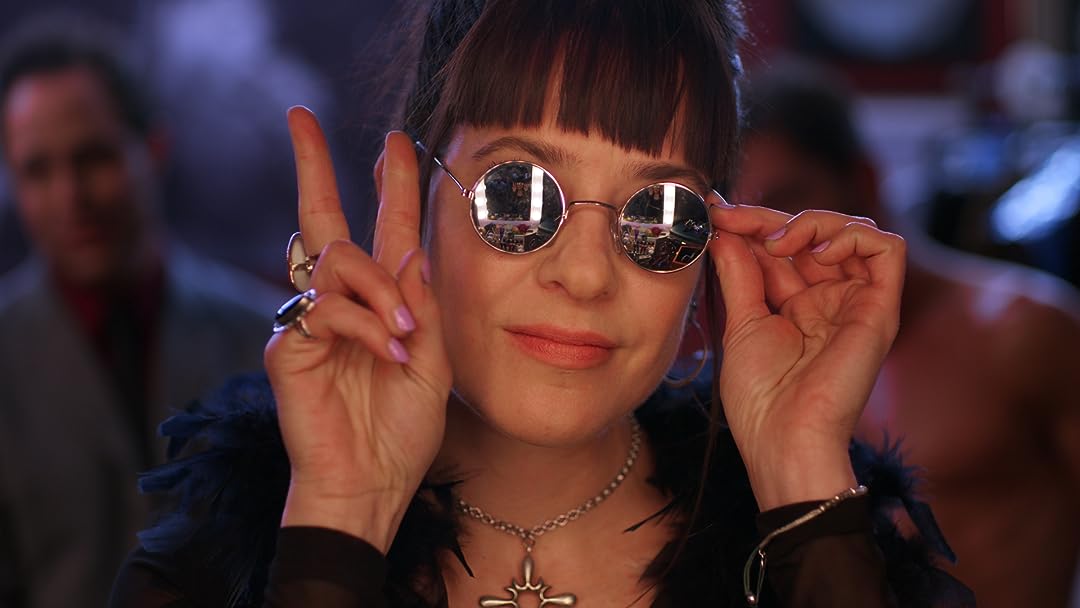 (177)
7.71 h 39 min201816+
A raunchy-smart music industry satire, this mockumentary lampoons clueless male entertainment industry executives in a #MeToo world. To save his record label, rock and roll talent man Pete Barnacle agrees to manufacture high gloss pop stars. As he grows desperate, his encounter with art teacher and muse Heroine Jones energizes him. But can he save the label when the industry itself is broken?

Follow FocusReviewed in the United States on February 4, 2019
5.0 out of 5 stars
Clever, Poignant, and Daring
Verified purchase
Beautifully crafted and inventive, Stadium Anthems has a dry clever humor that's equally matched by the mockumentary style format intertwined into the plot.

Giving an in-depth view of what I imagine takes place behind closed doors at a medium sized record label, the characters spice up the various personalities one might not expect to find in a corporate setting.

Backed by a well curated soundtrack, the music sets the mood and tone that matches the environment and setting of the entire film.

Besides being a filmmaker, writer & director, Scott Douglas Brown is a music lover that appreciates the business and artistry. He emphatically understands the struggles and difficulties women face in the workforce and in life as portrayed through the art teacher and lead character Heroine Jones, played by Toddy Walters.

Stadium Anthems covers a lot of ground as it navigates through the ensemble cast of characters that keeps the audience engaged to the end. I highly recommend this film and it's a must see for anyone who appreciates an inside look behind the music business.

Amazon CustomerReviewed in the United States on June 21, 2019
5.0 out of 5 stars
Irreverent Look at the Music Industry
Verified purchase
This is a truly unique film, hard to pin down and very timely for the #MeToo era. What sucked me was the witty dialogue throughout the film skewering the music industry lead by self obsessed men who are more id driven beasts than nuanced characters. This is compelling satire that seems so over the top until one considers the recent scandals of Harvey Weinstein et al. making it that much more thoughtful as the audience is left to ponder maybe this isn't so satirical after all. The film is grounded by quotes from famous musicians venting their frustrations with the industry that both exploits and launches their careers.

A bold, unique, raunchy comedy that lays bear our compulsions while at the same time providing wonderful food for thought about the power of music and the industry which props it up, threatens to destroy and slowly adapts to the ever changing marketplace.

This is a film unlike any other i've seen...which is a good thing.
18 people found this helpful

suzanne coxReviewed in the United States on December 4, 2018
5.0 out of 5 stars
Funny and Thoughtful. Compelling characters, great original music, and an ultimately uplifting theme
Verified purchase
This is a movie with many layers. At the surface, it's a hilarious spoof of the music industry, where crass executives get their due while sincere artists get a taste of today's version of pop stardom. After the first 20 minutes or so of character and story intro, the pace and the emotional draw of the movie picks up in the second and really blossoms in the last third, with the strong female characters coming through triumphant. The original music - with gripping, great tunes and production - is reason enough to watch this movie. These songs may be popular in their own right once the soundtrack is available. The characters are compelling, funny, and play off each other well. The movie has in-depth character development through a combination of fast-paced action and antics, clever dialogue, and Spinal Tap-like mock-umentary interviews. There are allusions to musical hits and misses from many genres, references to the Star Wars pantheon that contrast nicely with unexpectedly thoughtful messages from classic art, and a thread throughout the movie that asks what it means to make art when the audience and industry objectify the artist. From the music industry perspective, the movie asks, should art be free on the internet, or should artists be paid for their creative work? This independent movie is one worth paying for: a romp to watch, with gems to come back to after its end.
22 people found this helpful

catch22Reviewed in the United States on April 24, 2019
5.0 out of 5 stars
A Masterpiece of Satire Well Worth the Watch!
Verified purchase
Hollywood studio quality in this masterful mockumentary by writer/director Scott Brown. The satire about the music industry is cleverly scripted and pulled off to perfection by a stellar cast of on point characters that maintain a consistent tone throughout. An absolutely brilliant ensemble of incredible talent and humor. Fabulous soundtracks compliment the production beautifully. It's clever without being campy or goofy. While this is a mockumentary, I'm sure a lot of it hits home as to the real problems plaguing the music industry and creative artists in general. It prompted me to do a little research myself of some of these activities and I found it fascinating. Huge thumbs up all around for this high quality indie gem. I thoroughly enjoyed it.
17 people found this helpful

ThecoloryellowReviewed in the United States on June 11, 2019
5.0 out of 5 stars
Quick, witty and satirically funny.
Verified purchase
Indy films are at the heart of storytelling. And Stadium Anthems is a well-shot comedy that makes you unsure if you should laugh or be offended! But you'll probably choose laughter! The filmmaker did a great job with presenting the world of musicians in a fun, entertaining way. Great cast, good music and the story is wrapped up at the end so we're not left hanging. Kudos and 2 thumbs up!
18 people found this helpful

MattReviewed in the United States on December 20, 2018
5.0 out of 5 stars
A Raunchy Mockumentary The Music Industry Probably Deserves
Verified purchase
Raunchy, referential and balls to the wall, Stadium Anthems is a bawdy reflection of the music industry today. Imagine "The Office" if every other joke was a sex joke or a playful jab at the music industry. For those in the know when it comes to the music biz, this will surely deliver on the inside humor. For those like myself who know very little about that world, Scott Douglas Brown's irreverent film delivers an entertaining education and a slew of chuckle-worthy one liners to write home about. Sometimes it feels like being in a writer's room and listening to 8 writers firing off pitches at will, luckily to much success.

What I appreciate most though, was not necessarily the humor, but rather the character development. If I weren't able to root for these characters, all the jokes in the world would feel cheep and eventually start falling flat. Yet, because Brown builds up a cast with legitimate desires and empathetic struggles, I was on board throughout, hoping that at least a few of them would pull through and succeed in a world that seemingly begs for everyone to fail.

The cherry on top was Gretchen, "Knower of Things," the one serious character in the film who provides actual, real world details in what end up being comedic asides to the camera. Her genuine tone and love of the art world is so sweet in contrast to the rest of the loveably-unlikeable characters that it ends up creating some of the biggest laughs throughout.
17 people found this helpful

Amazon CustomerReviewed in the United States on December 22, 2018
4.0 out of 5 stars
Loved it
Verified purchase
What a deep and intelligent, but also fun, movie! Was really impressed by it. This was legitimately a great indie movie that I'm glad I stumbled upon. Very topical too.

It has a lot of fun and inspired comedic moments, but the reason this movie works is because those are layered in with thoughtful and compelling takes on our modern world (and the entertainment industry specifically). Raunchy but also clever. Douglas Scott Brown really has pulled together an impressive satire and I hope more people see it.

I would sum up this movie as: a delight. Didn't know much going in, and really loved it throughout. Do yourself a favor and check it out!
17 people found this helpful

JGReviewsReviewed in the United States on January 23, 2019
5.0 out of 5 stars
Raunchy and Clever Comedy
Verified purchase
It's not too often that you find a comedy that is THIS raunchy and THIS clever, and Stadium Anthems has pulled it off. This wild dark comedy brings both really clever dialogue and its fair share of sex jokes, which I found to be a hilarious combination. Dark comedies are not everyone's cup of tea, but for those that enjoy the genre I think they will appreciate Stadium Anthems as I particularly enjoyed this sendup of the music industry. The topic of the music industry grappling with change, particularly in the current digital/post-Napster age, is ripe for satire and Stadium Anthems is the first film I've seen that really takes on the subject. If you like clever, raunchy comedies, I highly recommend Stadium Anthems!
16 people found this helpful
See all reviews
Back to top
Get to Know Us
Make Money with Us
Amazon Payment Products
Let Us Help You
EnglishChoose a language for shopping. United StatesChoose a country/region for shopping.
© 1996-2022, Amazon.com, Inc. or its affiliates