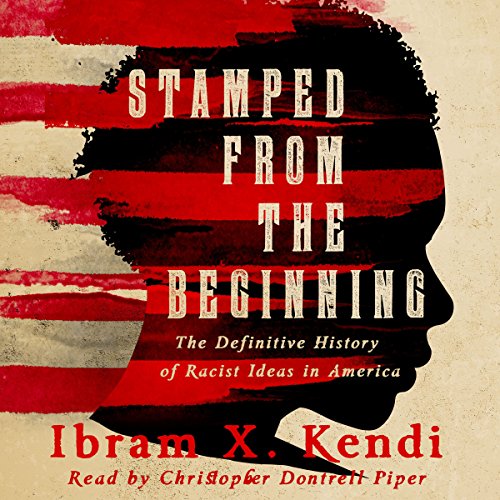 Stamped from the Beginning: The Definitive History of Racist Ideas in America

Some Americans cling desperately to the myth that we are living in a post-racial society, that the election of the first Black president spelled the doom of racism. In fact, racist thought is alive and well in America - more sophisticated and more insidious than ever. And as award-winning historian Ibram X. Kendi argues in Stamped from the Beginning, if we have any hope of grappling with this stark reality, we must first understand how racist ideas were developed, disseminated, and enshrined in American society.

In this deeply researched and fast-moving narrative, Kendi chronicles the entire story of anti-Black racist ideas and their staggering power over the course of American history. Stamped from the Beginning uses the life stories of five major American intellectuals - Puritan minister Cotton Mather, Thomas Jefferson, abolitionist William Lloyd Garrison, W.E.B. Du Bois, and legendary activist Angela Davis. - to offer a window into the contentious debates between assimilationists and segregationists and between racists and antiracists.

Your audiobook is waiting!
Learn more about Membership
List Price: $24.95
You Save: $8.00 (32%)
By completing your purchase, you agree to Audible’s Conditions Of Use
Sold and delivered by Audible, an Amazon company

Amazon Customer
1.0 out of 5 stars Bad printing/binding error made my copy impossible to read
Reviewed in the United States on June 30, 2020
I am looking forward to reading this book. Too bad half of this one is missing. The review is not for the content of the book, but for the lack of actual content in my copy.
Images in this review

Anthony Pignataro
5.0 out of 5 stars White people should read this
Reviewed in the United States on April 8, 2018
Verified Purchase
This is one of the greatest history books I've ever read. I was highlighting passages on pretty much every page, mostly because so much of what's here was new to me. Hey, I'm an upper middle class white guy who's trying to examine my own privileges, understand more of why there's so much racism in this country and learn how I can do better. This book, which was undoubtedly extremely difficult to write, is an amazing resource, one I'll be referring back to probably for the rest of my life. We all owe Ibram X. Kendi a tremendous debt.
Read more
573 people found this helpful
Helpful
Report abuse

A. H. Wagner
5.0 out of 5 stars A very painful but highly illuminating must-read on how racism took root and persists in the US
Reviewed in the United States on April 26, 2017
Verified Purchase
About halfway through reading this book, I realized I was highlighting almost every single page and had to start color-coding my highlights so as to make a little more sense of why certain passages struck me—a visual testimony of how illuminating Stamped from the Beginning is. With a primary focus on racism toward African-Americans and people identified as Black, this book is a thoroughly researched, sweepingly comprehensive survey of racism from its first traceable roots in ancient Greece when Aristotle said Africans had “burnt faces” to the start of the African slave trade in 15th century Europe, to the first recorded slave ship arriving in colonial America in 1619, all the way through the Civil War, the Jim Crow laws, the 1960s Civil Rights movement, and up to the present day. In order to help readers navigate this extensive timeline, author Ibram X. Kendi divides the book into five parts, featuring one historical figure as a sort of tour guide or anchor for each part.

Very few individuals or institutions mentioned in this book come off as completely free of racist thinking; even many abolitionists and civil rights activists are revealed to have held racist ideas that contradicted their cause. This made me realize the extent to which racism has ensnared the United States in its pernicious roots. In Stamped from the Beginning, Kendi presents two main ideas about racism that helped me understand its influence and progress over the centuries. First, he explains that “Hate and ignorance have not driven the history of racist ideas in America. Racist policies have driven the history of racist ideas in America.” The author admits, “I was taught the popular folktale of racism: that ignorant and hateful people had produced racist ideas, and that these racist people had instituted racist policies. But when I learned the motives behind the production of many of America’s most influentially racist ideas, it became quite obvious that this folktale, though sensible, was not based on a firm footing of historical evidence.” As Kendi explains further, “Racially discriminatory policies have usually sprung from economic, political, and cultural self-interests, self-interests that are constantly changing.” Now that I understand self-interest—not hate or ignorance—has been the driving factor behind racist policies, I can better understand why racism hasn’t died out with the Emancipation Proclamation or desegregation or any of the Civil Rights Acts passed in this country. Tragically, racism persists and continues to evolve according to the current self-interests of people and institutions in power. It’s why, after slavery was abolished, segregation and the Jim Crow laws rushed in to replace it, and long after segregation has been outlawed, African-Americans continue to be oppressed by disproportionate mass incarceration as well as disadvantaged by fewer, inferior housing and employment opportunities.

Second, Kendi points out that racism is not simply a debate between those who support racist ideas and those who oppose racist ideas. Throughout history, three–not two–viewpoints on racism have persisted: “A group we can call segregationists has blamed Black people themselves for the racial disparities. A group we can call antiracists has pointed to racial discrimination. A group we can call assimilationists has tried to argue for both, saying that Black people and racial discrimination were to blame for racial disparities.” As much as I would like to believe I am firmly in the antiracist camp, reading this book made me realize I have held a lot of racist ideas from an assimilationist viewpoint that I need to correct. Kendi gives many examples of well-meaning civil rights activists, including some African-Americans, who upheld assimilationist ideas. Some persisted with these ideas their entire lives, others realized their error and later self-corrected to an antiracist viewpoint, and still others upheld both antiracist and assimilationist ideas, often not realizing the contradiction. Thus, a tragic pattern that has repeated itself throughout American history is the persistence of many assimilationists in seeking to abolish racist policies and ideas with the same flawed strategies that never work.

Indeed, the African-American author admits, “Even though I am an African studies historian and have been tutored all my life in egalitarian spaces, I held racist notions of Black inferiority before researching and writing this book.” I think it’s crucially important that Kendi tells readers about his mistaken notions of race—not to make readers feel better about their own ignorance, but to demonstrate how deeply racist ideas have taken root in American culture. Hopefully this admission on the author’s part will ease readers out of their defensive mode and open their minds to the disturbing truth that racism is a lot more pervasive among us Americans than we would like to believe.

If you want to understand exactly how racism took root in the United States and why it has persisted through the present day, if you are prepared for a very sobering, very painful, and often highly disturbing look at the many flaws, hypocrisies, and atrocities in the American notions of democracy, exceptionalism, and “liberty and justice for all,” then Stamped from the Beginning is a must-read. Ultimately, what the author conveys with copious examples is that “Black Americans’ history of oppression has made Black opportunities—not Black people—inferior.” An absolutely necessary emendation to the traditionally accepted canon of American history.

Dojcin
1.0 out of 5 stars To a Hammer everything looks like a nail.
Reviewed in the United States on March 19, 2020
Verified Purchase
Kendi pathologically cherry-picks his data. When discussing race and health, he laments that blacks are more likely than whites to HAVE Alzheimer’s disease, openly implying that this demonstrates clear anti- Black racism in the medical field. Of course, he neglects to mention that Whites are more likely to DIE from Alzheimer, according to the Center for Disease Control.

By selectively citing data that show blacks suffering more than whites, Kendi turns what should be a unifying, race-neutral battle ground––namely, humanity’s fight against deadly diseases––into another proxy battle in the War on Racism.

The entire book is filled with this kind of imaginary stuff. Unfortunately, It would require 5 whole books to debunk all the errors in this publication. - This book was nothing but a rushed political propaganda published in an election year (2016). Unfortunately it did not work and it will work even less in 2020 as Trump has unprecedented black support for a republican candidate.
Read more
533 people found this helpful
Helpful
Report abuse
See all reviews

The Reader
4.0 out of 5 stars A bit academic but worth the buy
Reviewed in the United Kingdom on December 11, 2018
Verified Purchase
It is not quite a focus on the characters in the book. It is more a vast history of racist and anti-racist ideas in America. The headline characters are more tools to navigate the history rather than a focus of the book. The book can be a bit academic at times with not much of a narrative flow but it does give some good insights and ideas into racism in America.
Read more
4 people found this helpful
Report abuse

Charlotte Elizabeth
5.0 out of 5 stars Well Written & Eye Opening. ESSENTIAL READ!
Reviewed in the United Kingdom on May 29, 2020
Verified Purchase
I really recommend that everyone reads this book.
Read more
2 people found this helpful
Report abuse

The Spyglass
5.0 out of 5 stars For anyone interested in a deeper dive into race relations in America
Reviewed in Canada on August 3, 2018
Verified Purchase
I bought this book for my father, as a Father’s Day gift. Although we are Canadian, my Dad is very interested in understanding the legacy of slavery in America and the indelible mark it has left.

The book was highly praised and recommended by people I trust. It did not disappoint. The book does a wonderful job of laying out the cyclical nature of civil rights progress and backlash. In many ways, what we are experiencing now, after 8 years of a black man in The White House, was inevitable. This author lays out the pattern that seems to be inescapable.

If you are interested in understanding more about why the pendulum seems to have swung so far the other way, I recommend this book.
Read more
8 people found this helpful
Report abuse