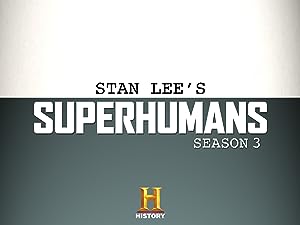 (5)
7.42014TV-PG
On Stan Lee's Superhumans 3 from H2, Stan Lee and the World's Most Flexible Man, Daniel Browning-Smith, travel the world testing the claims of real people who declare they have genuine superpowers.

omar007Reviewed in the United States on September 25, 2015
5.0 out of 5 stars
Five Stars
Verified purchase
awesome show
One person found this helpful

California DreamingReviewed in the United States on June 18, 2015
4.0 out of 5 stars
I'm Not Into Superheroes -- Unless They're Real
I'll admit, I'm not much of a comic book guy. And most superhero movies are just not that interesting to me, outside of maybe "Iron Man." And that's only because the writing was good, and Robert Downey Jr. was pretty funny. So you'd think that this series would be of no interest to me. And you'd be wrong.

While I don't think Season 3 is as good as the previous two, I still like it. Sure, some of the episodes can be beyond cringe-inducing, and I'll usually just fast forward through those real-life superheroes when my stomach begins to churn and burn. But some of these people are amazing, and sometimes, you'll be tempted to rewind and watch feats over and over, as you will not believe your eyes.

A few examples, from the first few seasons. 1. There is a guy who claims to be the best stunt driver ever, and after watching, I think he must be. He parks a car at around 30 MPH, and lights a match with the bumper of his car at about that speed! Wow. 2. One guy -- I think in India -- can climb a rock face bare-handed, as fast as a monkey! And sometimes he goes upside down for the next handhold! 3. There is a guy who claims to be the fastest draw and shot with a handgun ever. He must be. One time, he took out two balloons at once -- or what Daniel thought was one shot (I did too) -- but when played back, in super slow motion, the guy shot twice, and it was so fast, it sounded like a single shot! I'm sure he makes those Wild West shooters look like amateurs.

But I hope that Stan Lee and Daniel have more seasons left in them. Even though I'm not into superheroes. Unless they're real.

RobNRobynReviewed in the United States on July 27, 2018
5.0 out of 5 stars
Fun show with a great host
I like it because I am in it. Lol. Cool show to be a part of.
See all reviews
Back to top
Get to Know Us
Make Money with Us
Amazon Payment Products
Let Us Help You
EnglishChoose a language for shopping. United StatesChoose a country/region for shopping.
© 1996-2021, Amazon.com, Inc. or its affiliates