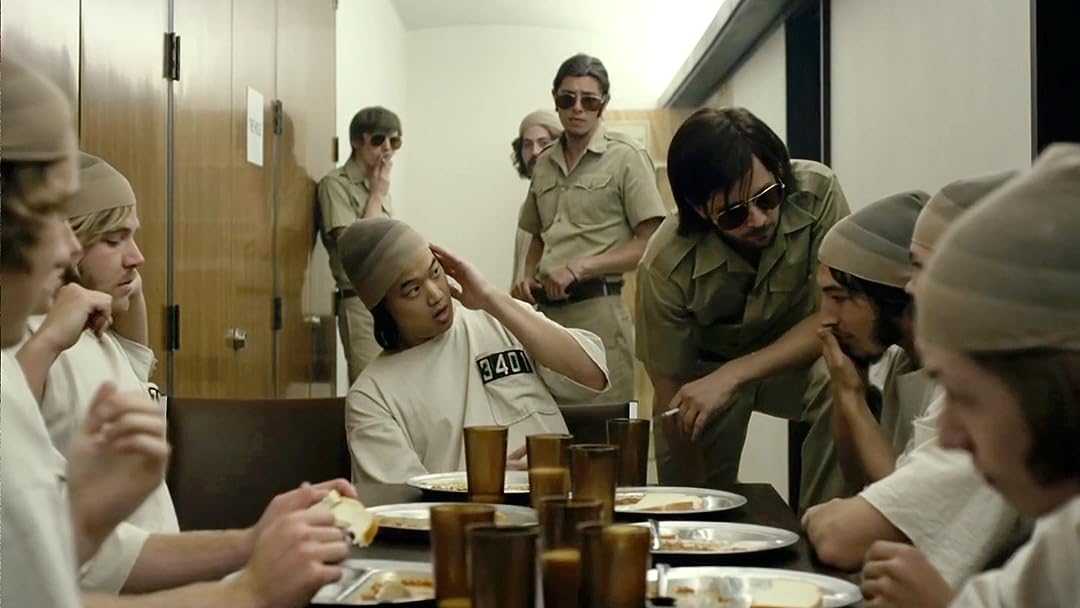 (1,611)
6.92 h 1 min2015R
Based on the infamous true story, 24 students role play as prisoners & guards in an experiment that shocked the world. This chilling thriller stars Ezra Miller & Billy Crudup.

Christina ReynoldsReviewed in the United States on December 14, 2020
5.0 out of 5 stars
Powerful Direction and Amazing Performances
Verified purchase
My rating is more of a 4.5
Thank you for reading in advance!

Where to begin then the obvious elephant in the room?
Most people may already be familiar with the events this film is based off of, but for those of you that aren't - this is based on an experiment that was ran by a professor Zimbardo at Stanford University in the year 1971. During this experiment 24 students were recruited to act as ‘prisoners’ or ‘guards’ (by random assignment) at a makeshift prison that was intended to last two weeks.
There isn't much that can be said about this event that I am not already aware of, and in an effort to be concise all I can say is that every criticism possible of this experiment has already been offered and published; The subjects, despite being randomly assigned , hardly reflects any amount of diversity that could have made this study have a larger amount of real-world applications. Unanimously identified as unethical in practice, this study has been deemed by many as a dangerous exercise in academic hubris and/or a profound demonstration on the nature of evil.
The reason I say this is just so I'm clear - I'm not here to discuss or rate this film based on how I feel about its source material despite having my own particular opinions about it.

In regards to its accuracy, this is a surprisingly authentic representation of Zimbardo’s work; Despite a few names that are changed in the film many of the elements that may seem “dramatized” or “hollywood” are based on both eye witness accounts and data released about this study to the general public. Even the most heinous of scenes - like those in which prisoners are instructed to carry out sexual behaviors as a means of demeaning them - inch disturbingly close to reality and are worth noting as not being the result of creative choices made by anyone involved in the making of this film. Even Mr. Zimbardo himself has watched this film and acknowledged the portrayal of him as more than fair - in his own words specifically he says it “spares no judgement” in regards to his character or his controversial methods.

The nature and reported emotions felt during this experiment are made palpable through decisions made in the casting, screenwriting, and the set design Department. Lighting and camera angles work to invent an environment that is seemingly claustrophobic and puts audience members in the mindsight of the characters in the film that are currently being focused on. The scores and the dialogue are craftily orchestrated around one-another and captures a meticulous amount of chaos and misery that resonates with viewers. It goes without saying that the performances (Notably, those by Angarano and Miller) create a reasonable amount of tension and make the illusion of prisoners losing sense of time, their separate identities, and their connection with the outside world all-the-more believable.

Surprisingly enough, ‘The Stanford Prison Experiment’ Makes an attempt at sneaking in interactions that speak to the largest criticisms of this experiment. Furthermore, it is made very clear that this experiment is now considered ultimately unethical, but it would have benefited from making these points more overt even if done as a collection of words that scroll as the credits begin showing. Perhaps even worst of all, one of the positive results of this experiment is given no amount of acknowledgement despite the context in which it occurs (There have been various alterations made to how prisons have been run in America since this experiment having been completed). The absence of these don’t necessarily take away from the quality and value of this film - but the inclusion of them would have taken this just a few more steps towards an ethically-sensible direction.

Despite being an account of a most uncomfortable event in history ‘The Stanford Prison Experiment’ stands out as a bold and ultimately factual rendition; it bends few rules and leaves even less to the imagination

Lisa SReviewed in the United States on August 31, 2016
4.0 out of 5 stars
i wouldn't call this enjoyable, but it was definitely worth the watch
Verified purchase
this movie was sort of like *lord of the flies* except the idea that it actually happened, even a little like that makes me so sick to my stomach. I recommend the movie, but i would never watch it more than once. there is no need. there is something so unbelievably disturbing about the idea that someone who is given *power* (when in actuality i think that really they are supposed to be entrusted and obligated to protect) over the lives of others....could so horrifically abuse it...just to see how far they can go. the idea that we have the ability, at the drop of a hat, to dehumanize people so readily....and anyone can fall in to this trap...we just don't know until faced with it....and that others fall in line and allow it to happen.

these kids were not criminals and so it sort of makes it all worse...but even still, at what point do we have the right to treat someone like they are a monster? does someone who rapes, tortures..murders...deserve to be treated with respect and kindness?...does fear mongering really help any given situation? i don't know.

i walked away from this movie feelings depressed and sick to my stomach...to date the only other movies i can think of that made me feel this badly are *an american crime* and *the elephant man*
10 people found this helpful

Thomas FReviewed in the United States on January 20, 2016
5.0 out of 5 stars
Its one of the most brilliant films I ever saw
Verified purchase
Its one of the most brilliant films I ever saw. everyone is raised with the idea that police are good people arrested are guilty and the criminal justice system is fair. The american criminal justice system has its heritage based in the salem witch trials. That we put to death 19 women and one man for witchcraft is not a historical comedy, its indicative of what we still do. Accused rapists exonerated with dna evidence. a man in texas executed for arson when the flash was caused by his entering the house to save his daughters. The guilty and the honest are treated the same, the chinese way: confess for reniency! the one woman who admitted witchery was the servant of one of the families having the feud that lead to the accusations. And in that tragedy is our modern justice system. The threat of punishment so severe that even the innocent will admit guilt just to avoid the consequences of not confessing. The dynamic set up between the guards and inmates is exactly what happens on the streets with police and citizens. Those in control with the power use it to their own end and pleasure while feeling they are doing the right thing by dehumanizing others. It is bullying true to form and disgustingly accurate on how police really treat people when no one is looking
7 people found this helpful

Little Blue BoxReviewed in the United States on December 27, 2016
4.0 out of 5 stars
Experimenting with drama
Verified purchase
I'm a criminal justice professor, and I bought this to show in my classes. It details one of the most famous psychological experiments performed in the last 50 years, which brought renewed attention to the need for more stringent ethical guidelines in research. I've showed the original research video in class on numerous occasions. While very informational and interesting, the quality of the original leaves something to be desired. As this is more of an actual movie, the quality is much better. Students seem to stay more interested in this version. Keep in mind, however, the producers took many liberties in the presentation of the details. This version is much more dramatic than the original.
9 people found this helpful

Martin D. KimzeyReviewed in the United States on January 14, 2016
4.0 out of 5 stars
Do ethical people temporarily abandon morals in pursuit of knowledge that we already have?
Verified purchase
This is a very interesting movie of an experiment that required an absence of ethical constraints. This quickly lead to the establishment of an environment where oppression by guards against prisoners and retaliation of prisoners against guards was the only avocation.

The Eichmann Trial occurred a decade prior to The Stanton Prison Experiment. The Nuremburg Trials predated this experiment by 25 years. History and Biblical scripture shows many examples of the outcomes of such abuse,

What are the effects of a lifetime of self-justification for past evil acts? If one were to locate the "guard" who the prisoners called "John Wayne" and put him on trial, would he adopt, even now, an Adolph Eichmann air of banality?
6 people found this helpful

KrystalynReviewed in the United States on May 12, 2021
1.0 out of 5 stars
Ugh
Verified purchase
Took me 3 days to finish it, extremely boring.
2 people found this helpful

JenReviewed in the United States on July 24, 2016
4.0 out of 5 stars
Very good.. This is one of those movies where ...
Verified purchase
Very good.. This is one of those movies where you have to imagine yourself as one of the characters & try to understand what they're going through. I mean society has changed tremendously since the 60s & 70s. However that being said treatment like this was very typical back in that day & age. An in some places now in this current day & age, I'm pretty sure it's still the same way. That mindset made this film very intriguing, horrifying & captivating to me. It was definitely worth watching.
3 people found this helpful

Aaron S. YoungReviewed in the United States on June 10, 2021
4.0 out of 5 stars
Be prepared for this…
Verified purchase
This isn’t a fun Sunday afternoon movie. This gets real. This gets uncomfortable. This makes you think deep about human behavior. I’m a way watching this movie is like it’s own experiment.

You need to be prepared for how real things get. This probably isn’t exactly what happened, but it isn’t a watered-down, sugared-up version of history.
See all reviews
Back to top
Get to Know Us
Make Money with Us
Amazon Payment Products
Let Us Help You
EnglishChoose a language for shopping. United StatesChoose a country/region for shopping.
© 1996-2021, Amazon.com, Inc. or its affiliates