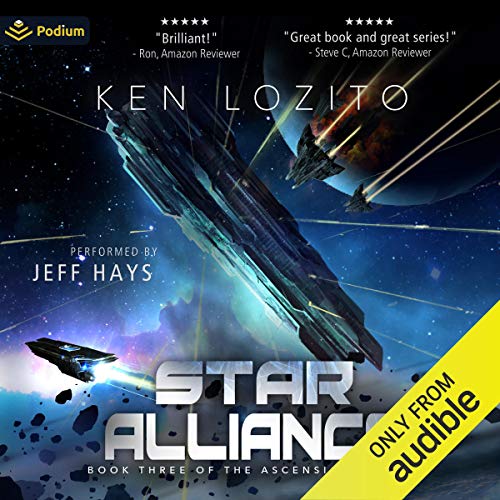 A daring rescue resulted in one of their own being captured. A soldier desperate to prevent the enslavement of humanity.

Held prisoner by a vicious alien whose race is determined to conquer the galaxy, Zack wakes to find that he is cut off from everything. Zack must figure out a way to escape his captors and a prison full of dangerous aliens to get back to his ship. Did his friends even know he was still alive?

Kaylan commands the Athena, Earth's most advanced spaceship. The crew is far from home and caught in an intergalactic war. The Boxans demand that they leave the star system, Xiiginn warships are hunting them, and the Athena is hopelessly outclassed. Kaylan must choose between leaving Zack to his fate or risking the lives of the crew for the slim chance of rescuing him.

Kladomaor can't let the Humans fall into the hands of the Xiiginns. The Boxans have been at war with the Xiiginns for years and they were losing. The Humans might be the key to their salvation, but only if he can bring them before the High Council and convince them to protect Earth. Their stealth ship is no match for the Xiiginn warships hunting them, and if he can't get the Humans to leave soon they would all be doomed.

Star Alliance is the third book in an action-packed space opera series. The crew of the Athena stands upon a precipice and their next action will affect Earth for generations to come. Will humanity be the next race to be enslaved?

Special invitation from Audible!
Learn more about Membership
List Price: $24.49
You Save: $3.50 (14%)
By completing your purchase, you agree to Audible’s Conditions Of Use
Sold and delivered by Audible, an Amazon company
Share

4.6 out of 5 stars
4.6 out of 5
478 global ratings
How are ratings calculated?
To calculate the overall star rating and percentage breakdown by star, we don’t use a simple average. Instead, our system considers things like how recent a review is and if the reviewer bought the item on Amazon. It also analyzes reviews to verify trustworthiness.

Reghu
3.0 out of 5 stars Young Adult story
Reviewed in the United States on June 6, 2018
Verified Purchase
The premise of the book is interesting. I was quite captivated by how the story progressed in the 1st two books.
However, after reading the 3rd book I couldn’t help but shake the feeling that the main characters in the books were based on Harry Potter and friends. I really liked the Harry Potter books, but they were based on kids growing up. The main “heroes” in these books seem to be based on the teenage Harry Potter and friends. One of the main heroes seems to be a more metrosexual, in touch with his feminine side Harry.
Also, although the author seems to completely ignore science at times so that the pace of the story is fast, sometimes this leads to the story being more fantasy than Sci-Fi. Yes Starwars gets away with it. But this story is not as epically proportioned as SW.
Read more
One person found this helpful
Helpful
Report abuse

Kindle Customer
5.0 out of 5 stars Robert's Review and Comments
Reviewed in the United States on November 10, 2020
Verified Purchase
Wow the pressure is ramping up now. Earth has a new entry on the Galactic Threat Board. (GTB) The Xiiginns must be dealt with and the only way seems to lead to genocide for the Space Vampires. Prepare for max acceleration and buckle up bucko, we are going suck head hunting. Thanks for a GoodRead.
Read more
Helpful
Report abuse

Mark M.
2.0 out of 5 stars FYI.. Wormholes don’t have event horizons
Reviewed in the United States on June 24, 2018
Verified Purchase
Sappy. Corny. The story itself is more suitable for young children. Kinda my fault I guess for reading hard science fiction most of the time. Quick question.... why is it every character in the books like to press their lips together? Or why most of the humans always get a thickening throat? Copy and paste I do believe. Two stars and not one? The editing is pretty darn good.
Read more
Helpful
Report abuse

Kindle Customer
5.0 out of 5 stars Great book
Reviewed in the United States on October 29, 2021
Verified Purchase
I love science fiction and this book is full of it. Tremendous amount of action, suspense and more. Great cast of characters, Ken has done a wonderful job of blending them together. I recommend this to all science fiction lovers.
Read more
Helpful
Report abuse

John H
4.0 out of 5 stars The story continues! A quick, easy, fun SciFi adventure
Reviewed in the United States on July 18, 2020
Verified Purchase
The story of Kaylan and Zack continues. Humans place in the universe is expanding. I have to suspend disbelief sometimes because I read too much sci-fi and the love story is very high school considering what the characters are experiencing. But I thoroughly enjoy the adventure, I do enjoy the characters, there are aspects of myself in each. So it’s easy to identify and put myself in their shoes. I enjoy Kens stories and highly recommend his books.
Read more
Helpful
Report abuse

andy
5.0 out of 5 stars great series
Reviewed in the United States on August 19, 2016
Verified Purchase
Great series, each book gets better. I bought the first book last week and finished the third within a little over a week.

There are a few spelling mistakes but nothing that puts you off. Like all brits i have to complain the books could be a little longer and why is the 4th book not ready for when i finished the third. (only joking)

Looking forward to number 4, lets hope it is not to long before i get my hands on it.
Read more
Helpful
Report abuse
See all reviews

John M. England
5.0 out of 5 stars Very enjoyable reading with quick movement between story lines.
Reviewed in the United Kingdom on April 17, 2019
Verified Purchase
Love these books, started reading Ken's Ascension series a few days ago and I cannot put them down (except for work and sleep) and I'm now about to start book 4. Great story about humanity's first contact with alien technology and then aliens themselves and how very quickly humans get drawn into a war between sides of a fracturing alien coalition. Good romantic angle between some characters and intrigue as to who is with the team and who is in it for their own benefit (Big picture V personal greed)
Read more
Report abuse

Nick Moz
5.0 out of 5 stars Cliffhangers
Reviewed in the United Kingdom on June 19, 2020
Verified Purchase
My previous review of this series criticised the lack of differentiation between aliens and humans. I now have cause to eat my words. Thought processes are distinct and explored in this volume. And a fast paced narrative
Read more
Report abuse

Kensuth1
5.0 out of 5 stars Much better
Reviewed in the United Kingdom on October 28, 2019
Verified Purchase
This is so much better than the last book and an enthralling read. I like how the stories characters are really showing their strength and weaknesses.
Read more
Report abuse

Huge
5.0 out of 5 stars Excellent
Reviewed in the United Kingdom on April 26, 2018
Verified Purchase
I have read this series so far and have enjoyed Ken’s other works before that but I have to say this is the best so far. I thoroughly recommend this to anyone who loves SciFi
Read more
Report abuse

Kindle Customer
5.0 out of 5 stars Bloody fantastic 20 out of 10
Reviewed in the United Kingdom on January 20, 2018
Verified Purchase
Hi Ken
God what a fantastic read the first three books have been, I am going now to get book 4, the people in the story line are so beliveable and have you routing for them well on to book 4
Best regards
Michael
Read more
Report abuse
See all reviews
Back to top
Get to Know Us
Make Money with Us
Amazon Payment Products
Let Us Help You
EnglishChoose a language for shopping. United StatesChoose a country/region for shopping.
© 1996-2021, Amazon.com, Inc. or its affiliates