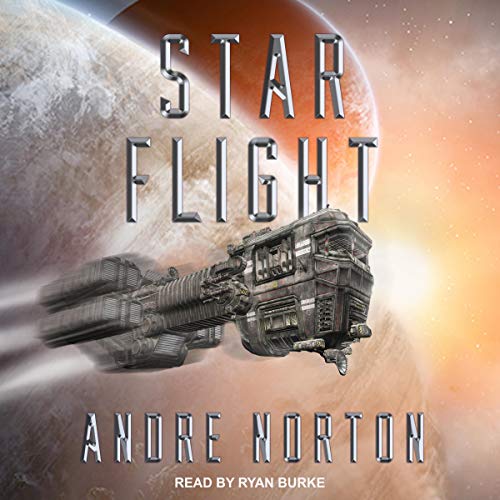 The Stars Are Ours: Dard Nordis is a hunted man. His brother was murdered for covert activities as a scientist in a world in which scientists and engineers are blamed for the global war that smashed civilization. The global dictatorship of Pax has ordered their execution. Now he is on the run, trying to find the secret stronghold of his brother's friends and colleagues - a hidden place where the few remaining scientists are desperately building a spaceship to escape to the stars.

Star Born: Centuries after the desperate flight from Earth, Pax has been overthrown and humanity again reaches for the stars. Rof Kurbi's spaceship reaches the planet Astra, but he and the crew do not know that the planet already has a colony established centuries ago by the fugitive humans from Earth. Nor do they know that the apparently friendly natives of the planet are actually the malevolent remnants of a corrupt civilization that all but destroyed itself millennia ago - and that they are plotting to eliminate all humans from Astra, both the recent arrivals and the star born colonists.

Enjoy a free audiobook + more
Learn more about Membership
List Price: $17.49
You Save: $2.19 (13%)
By completing your purchase, you agree to Audible’s Conditions Of Use
Sold and delivered by Audible, an Amazon company
Share

4.4 out of 5 stars
4.4 out of 5
67 global ratings
How are ratings calculated?
To calculate the overall star rating and percentage breakdown by star, we don’t use a simple average. Instead, our system considers things like how recent a review is and if the reviewer bought the item on Amazon. It also analyzes reviews to verify trustworthiness.
Top reviews

Peter V. Giansante
3.0 out of 5 stars Five stars for the story; one star for the typo errors
Reviewed in the United States on May 20, 2018
Verified Purchase
First of all, the stories (“The Stars Are Ours” and “Star Born”) are among the classics of science fiction. I read them for the first time as Ace paperbacks 55 years ago, and I easily recognize numerous themes and aspects of the stories that have since become common fare in sci-fi movies and TV shows.

I’m not sure whose idea it was to repackage these two novels as a two-part series with the confusingly inapplicable name “Star Flight”. Apart from the fact that there’s no “flight” in the vacuum of space, the pittance of space travel that’s involved in the story lines has essentially nothing to do with the plot in either novel. The author’s original titles are much more descriptive.

As with many of Andre Norton’s works, the stories straddle the boundary between science fiction and fantasy. Nevertheless, the key role that telepathy plays (especially in “Star Born”) is still well within the bounds of sci-fi, so those who normally eschew fantasy in favor of sci-fi won’t be alienated. That is, there’s no inexplicable rank mysticism to offend the rational mind.

The only downside is in the inexcusable number of typographical errors in the Kindle version. Whoever did the conversion from printed text to electronic format should be taken out and shot...or at least required to fix all the hideous typo errors; misspellings, repeated words, missing or incorrect punctuation, wrong words (e.g. “daring” substituted for “during”, “me” substituted for “the”...etc.). I have never seen so many errors in a book.

I rate the stories unreservedly as four to five-star material. The writing is imaginative, lucid, and full of vivid imagery. The only thing that spoils the experience is the plethora of typo errors, which make the Kindle edition an embarrassingly inferior product. Amazon should either refund my money or fix the errors.
Read more
4 people found this helpful
Helpful
Report abuse

Goffe Torgerson
3.0 out of 5 stars Sadly decided to return it
Reviewed in the United States on July 11, 2021
Verified Purchase
I really liked the idea of these two books combined into one hardcover version. I bought this with hope that the stated typos wouldn't be an issue. It is an issue. It is tough to read in places, and it is both sad and contemptible that the publisher went to the effort to do this but completely neglected to assure the quality of the only real essential part of the product, the text. I am returning it with hope that the publisher will reprint it with a pristine text. I would happily buy it then.
Read more
Helpful
Report abuse

Amazon Customer
4.0 out of 5 stars Someone forgot to finish proofreading
Reviewed in the United States on July 26, 2014
Verified Purchase
First of all, these are two of my all-time favorite books. They are considered books for young readers, but the stories are also enjoyable for adults.
It appears as though the books were scanned to convert them to digital format. Scanning is far from perfect and requires that the entire text be proofread. Whoever had the job apparently only did the first quarter of The Stars Are Ours, the remaining part was full of bizarre phrases. Someone who had not read the book previously may be totally confused at times. I recommend finding a paperback
copy of the book, instead of trying to read this one. Star Born is actually public domain and can be found on archive.org and other sites.
Read more
5 people found this helpful
Helpful
Report abuse

BLLingg
5.0 out of 5 stars BOTH in ONE!!!
Reviewed in the United States on April 2, 2013
Verified Purchase
It has both Books!!! The Stars are Ours and Star Born. I already had the later but I'm thrilled to FINALLY have the former AND to have both of them together. Even though they aren't really connected - different Characters in each one - they're still within the same World so it's great being able to go straight from one into the other.

I have the Kindle version. Reads with no problems. No Pages, just Location. And no links to Books so want to read just Star Born, you have to work your way through Locations. But I can live with those minor issues.

These are the Books I discovered when I was still in my Teens. And I read and reread and reread them until I discovered my Kindle. And I gave up Books forever (except for Text Books). They are clean, full of activity, and flow well. They are also easy to pick up, read for awhile, then go back to what I was working on.
Read more
3 people found this helpful
Helpful
Report abuse

T. A. Ross
5.0 out of 5 stars Great story/lousy editing
Reviewed in the United States on July 14, 2016
Verified Purchase
I think this was the first science fiction book I ever read (The Stars Are Ours). It caused me to read everything Andre (Alice Mary) Norton wrote that I could find. My only complaint is there are numerous transcription errors in this edition (someone ran a copy through Optical Character Recognition software and a decent editor didn't review the text. Buy an original copy if you can. Another problem with other Norton republication so is they've changed the names of stars from actual star names to fictitious names. That's a silly and needless change that depersonalizes the story. It doesn't affect this book.
Read more
One person found this helpful
Helpful
Report abuse
See all reviews

Firefly44
3.0 out of 5 stars A Great Read!
Reviewed in the United Kingdom on June 12, 2018
Verified Purchase
Action packed and interesting, I loved the plot and the characters. Unfortunately however, the book is littered with mistakes. There are missing words, spelling mistakes and one of the character's names even changes. I find this very off putting, which is why I have given a 3 star rating.
Read more
Report abuse