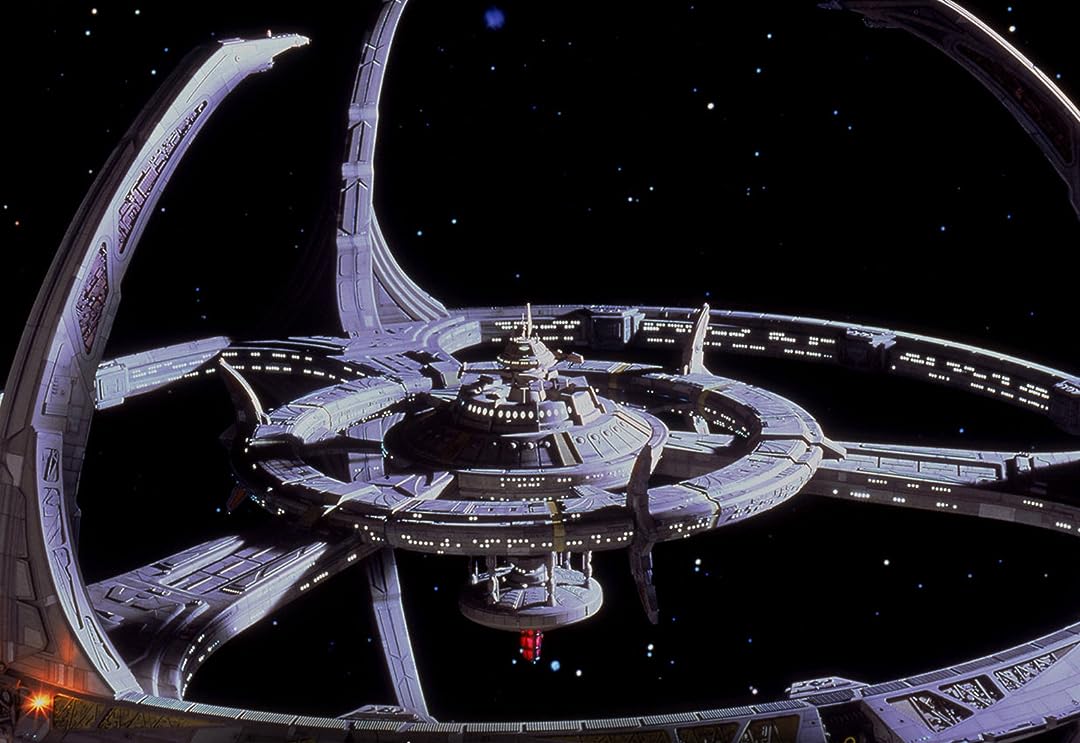 Mike Billington author of Murder in the Rainy SeasonReviewed in the United States on July 30, 2018
4.0 out of 5 stars
A worthwhile viewing experience
Verified purchase
"Deep Space Nine" was a bold concept for the Star Trek franchise and, by and large, it worked.
The first season, however, was uneven. The writing was a little choppy and the actors were - how best to say this - often "overwrought." By that I mean the actors seemed unsure of themselves throughout much of this first season of this brand new series. As a result, they tended to overact: The arguments, for example, were too loud and the reactions to even minor events tended to be overly dramatic.
That changed - for the better - in the last two episodes of the first season when "Deep Space Nine" took on two highly charged, very emotional issues: The aftermath of a long, brutal occupation and the capture of what appears at first glance to be a major war criminal in "Duet" and religious fanaticism in the final episode "In the Hands of the Prophets." Both of those episodes were handled with skill by the actors, the writers, and the directors. They are, in my opinion, two of the finest episodes in the entire Star Trek franchise.
The CGI is dated - not surprising given the age of this season - but as always that's not a huge issue because all the programs in the Star Trek universe have always relied upon writing, acting, and the willingness to tackle big social, moral, and ethical issues for their success. Computer-generated tricks have never been all that important to the franchise and that holds true for this first season of "Deep Space Nine."
The verdict: A worthwhile viewing experience for Star Trek fans and for those wanting a little more from their television programs than a gun battle and a car chase.

Barry CudaReviewed in the United States on February 16, 2020
4.0 out of 5 stars
Deep Space Nine is my favorite of the Trek series, and this is where it begins
Verified purchase
Not surprisingly, the writers and actors are still trying to figure out their world and roles in the first season, so in an artistic and entertainment sense, it is not as good as later seasons. But this is where they're laying the groundwork for a different kind of Star Trek:

- One in which the story is not dominated by the Federation perspective, but often has conflicting views from other cultures.

- One in which the main action isn't around a starship going out to different worlds but around a space station to which people from other worlds come.

- One in which spirituality is taken seriously and plays a significant role in the unfolding of the action.

- One in which conflicts between worlds and worldviews are not neatly wrapped up in 1-2 45-minute episodes.

Some Trek fans hate it; others love it. Count me in the 'love it' camp. But you'll want the entire seven season collection, as they tell a whole story. Season one only gets you in the door.

MikeAReviewed in the United States on March 15, 2019
5.0 out of 5 stars
Player recommended here betters viewing
Verified purchase
I recommend to better your viewing of dvds this:

I bought the above player & makes a difference on your viewing experience. Have watched series(unlikely to get Blu Ray transfers) like Stargate & saw a difference in picture quality comparing the upscale player listed above to a regular DVD player I had. Enough of a better picture quality I most likely will not replace my dvds with Blu Rays now available.
I would also recommend staying away from manufacturered dvds around 2003 as similar series from 2003 has dvd defects making dvds unplayable(server dvd pitting I’ve found).
This was like a 2017 manufacturing date & plays flawlessly. I recommend this series as is a enjoyable series to watch. Get to watch episodes I missed on tv when originally aired.
Bought 6 of the 7 seasons due to season 5 being like $45 & prefer to pay at most $20 each season. Hoping I can catch season 5 on sale before I make it to watching thru end of season 4.
Although I hadn’t bought the complete series set due to very bad reviews on how the complete series is packaged I’d recommend you buy individual seasons where you have a good case to store your dvds in. You’ll have to pay 30% to 50% more, but is worth it over the long haul. Poor storage hurts the dvd. I have dvds that are like 15+ years old that still work fine due to my opinion of them being in good dvd Storage containers.
3 people found this helpful

K. YorkReviewed in the United States on May 16, 2018
5.0 out of 5 stars
Great, and excellent transfer to DVD.
Verified purchase
What a great series. Excellent transfer to DVD.
The original fancy schmancy (the technical term :->) packaging - when DVDs first came out - breaks as you open and close the 'book.'
We were VERY happy to find this new packaging and RE-PURCHASED Season 1. (Thankfully, we hadn't gotten any further than that on the first go around.)
If we're understanding correctly, this packaging may be going away. I'd say buy the whole series now.
That's what we did, but we purchase each season separately.
4 people found this helpful

Obi WanReviewed in the United States on April 21, 2015
5.0 out of 5 stars
Great story telling! Best overall plot of the Trek Franchise
Verified purchase
This is such a great show. The Federation team assigned to outpost Deep Space 9 doesn't spend each episode traveling the stars like in the other Star Trek series. They spend most of their time on the space station, or within close proximity to it. So it's a different twist on the Star Trek franchise.

As for the storytelling its probably the best overall story arc in the Trek franchise. While there are a lot of single episode stories, there is an overall story arc that spans the entire series. It's interesting. It's well written. Well made. And it's just good sci-fi and story telling in general. The series long story arc takes a lot of twists and turns but it deals with inter stellar politics and power struggles that the other Trek series only elude to. (Yeah, Captain Picard has a fair amount of diplomatic and military run ins with the Romulans and Klingons, but on Deep Space Nine the series delves much deeper into the politics or all that, and introduces a few new races from the other side of the galaxy into the mix)

If you like the Star Trek franchise, you have to try Deep Space Nine. It's a little slow in season 1 but I assure you it picks up speed greatly as the series progresses.
9 people found this helpful

GCTReviewed in the United States on October 8, 2017
5.0 out of 5 stars
Thoughtful Entertainment
Verified purchase
Some of the episodes were slow to get started, but I really enjoyed the interactions between the characters. Like Star Trek at its best, this show comments on struggles of its day by placing them in the future while always keeping entertainment at the forefront. I am very glad that I can see all of the episodes here. I missed many of the shows when DS9 aired on TV and am thoroughly enjoying them now.
2 people found this helpful

KiraNyresReviewed in the United States on July 28, 2016
5.0 out of 5 stars
DS9 the Best Star Trek Series by far
Verified purchase
Deep Space 9 is arguably the best Sci Fi television series ever produced. The complexity of the Dominion Wars is thought provoking, entertaining, and adds a depth to the franchise never to be outdone. The casting was fabulous the history of Bajor the political skirmishes I cannot emphasize how wonderful this show is. By far my favorite television show ever. There's only a handful of episodes in its 7 seasons that are mediocre this show will hook you and you'll cry when it ends before you hit replay starting at season 1 again. Captain Siskos character his relationship to his crew Avery Brooks just nails it! Nana Visitor is amazing she's even more Bajoran than 'To laren' (sorry kindle keeps auto correcting that's R O Lauren) just watch it! I never thought I'd find a series I'd enjoy more than TNG but I did its this one and it is genius!
10 people found this helpful

Joanna D.Reviewed in the United States on October 6, 2013
4.0 out of 5 stars
Surprise--this Trek series is pretty good
Verified purchase
When Deep Space Nine came out, essentially replacing Star Trek Next Generation, a lot of us didn't like it much. For one thing, the aspect of the show was dark; the space station seemed dark and rather dreary. And the new characters, Sisko, Odo, Kira, didn't seem to blend well with favorites like O'Brien from TNG. And then there were all the Ferengis. If you had to pick an alien species to focus on, why the Ferengis? Annoying little trolls with irritating habits. Did they have any redeeming qualities?

But after watching "The Emissary" and then the series, one after the other in streaming video, I realized, this is a very good sci-fi series, even if Ben Sisko will never be as popular as Jean-Luc Picard. The Bajor-Cardassian conflict makes for some good conflict and plenty of plotting and planning revenge. What is that Garak doing, a Cardassian as a tailor? And Quark, the Ferengi bartender, is acted so well by Armin Shimerman that he develops as an interesting character.

While the characters never seem to take on the personality that happened on Star Trek Next Generation, the writing is excellent and the episodes full of adventure. It did not take three seasons for this series to find its way, and in fact the first two seasons are quite good, not the case with Next Generation, which took three seasons to become popular and frankly, the first two seasons are awfully hard to watch.

While you can purchase these as DVDs with extras such as Deep Space Nine: A Bold Beginning, crew dossiers on Kira Nerys, and stuff about Quark's bar and the imaginative aliens, I watch mine in Amazon Prime. Long series with many seasons make for good evening watching, when you can download two or three episodes and really get into the series. While the characters never seem to develop as well as the Next Generation (Troi, Picard, Crusher, Data and Geordi) the writing and plots seem actually better in Deep Space Nine and it's one of the best science fiction series ever aired.
2 people found this helpful
See all reviews
Back to top
Get to Know Us
Make Money with Us
Amazon Payment Products
Let Us Help You
EnglishChoose a language for shopping. United StatesChoose a country/region for shopping.
© 1996-2021, Amazon.com, Inc. or its affiliates