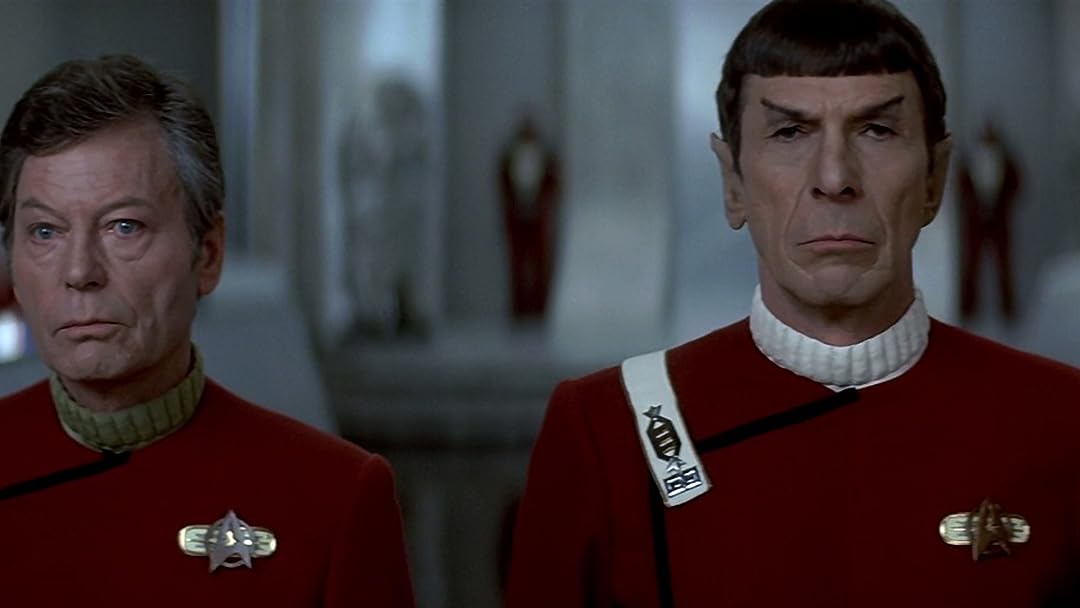 (3,280)
7.31 h 58 min1986X-RayPG
To save Earth from an alien probe, Kirk and his crew go back in time to retrieve the only beings who can communicate with it, humpback whales.

Dana PhelpsReviewed in the United States on March 22, 2019
5.0 out of 5 stars
Brilliant Film-- Funniest Trek Movie, Relevant Plot, Great Rhythm
Verified purchase
Leonard Nimoy is an underrated director but this one is undeniably a great work. The most obvious trait which separates it from most Star Trek movies is the comedy! It's got a lot of laughs. It's not a comedy genre film but it will surprise those who expect a dramatic or violent film as most others are. This one is fun. The plot is extremely relevant now though in 2019 the movie is showing its age. Whales are definitely not getting the respect they deserve and the genocide against Themis a suicidal mission of 'man' as Star Trek IV terms the human population (one of its signs of being an 80's film). There is no lack of action or intrigue despite the risk the screenplay took with a contemporary relationship to its timeline. The acting is uncannily excellent and the various things which make a movie worth watching are all top-notch: editing, sound, music, cinematography, wardrobe, props, makeup. All is superb. Those who don't generally appreciate Star Trek might like this one more than others as it is well knit with its pace, its accessible dialogue, the extraordinarily fine tuned performances which is to Nimoy's credit.

You can't get much better than this for a major Hollywood production with the biggest franchise in movie history at the peak of its power. It was a daring theme, somewhat criticized for its 'save the whales' ethics (which was a catch-phrase for liberal leaning folks of the time of its production) but it pulls it off whether you believe in saving whales or not. There's a lot of cute and clever twists to the scenes such as the revelation of 'transparent aluminum' to an engineer by Scotty -- a prediction made by the film which has come true, as it does exist in modern times. It makes good use of special fx with seamless representations of ships, time travel, etc. and this is one of the few Star Trek movies which doesn't really have a conflict with weapons firing, blood being shed or use of phasers. In fact the one attempt to stun a for made by Chekhov in a naval vessel called The Enterprise fails. It has the irony of a Klingon vessel being used to save the Earth.

All in all, this is an outstanding motion picture and most people watching will probably not be disappointed as it is highly entertaining despite your opinion about Star Trek itself.

A. AureliusReviewed in the United States on December 5, 2016
5.0 out of 5 stars
The best Trek movie!
Verified purchase
Everyone has their favorite Trek movie, and for many it is Star Trek II - The Wrath of Khan. While I couldn't disagree, I do feel that Star Trek IV is equally as good but in a more upbeat manner. In short, IV takes off right where III ended. Kirk and his crew are now wanted criminals for hijacking the Enterprise to head to the Genesis planet to recover Spock. And so they leave Vulcan with their captured Klingon Bird of Prey to return to Earth to answer for their crimes. And at the same time, an alien probe of immense power heads for Earth but seems to be searching for something other than mankind to speak to. What ensues is an epic story of time travel, ocean conservation and deadpan humor played out against the beauty of the San Francisco Bay Area.
And therefore, whenever I run into a person (usually an older person) who says they have never seen any Trek movies or shows and asks what is a good place to start, it is always Star Trek IV to which I point. Five star movie, even after 30 years of reflection have gone by.
49 people found this helpful

Linda HendrexReviewed in the United States on August 6, 2019
5.0 out of 5 stars
My Favorite Star Trek Movie
Verified purchase
Who doesn't know what the Star Trek series is? We all love it and can't get enough. But this one stands out from the rest.

I love the wit and sharpness of the script and the great performances. The story centers on an emergency time-travel adventure to late 20th-century earth on an expedition to save whales on the verge of extinction. Who knew that the survival of earth depended upon it?

If you haven't seen this film, I highly recommend it for an evening when you are in the mood for something lighthearted, adventurous, and just plain fun. Don't forget the popcorn, and invite some really good friends to enjoy it with you!

ToIsleOfViewReviewed in the United States on September 14, 2020
5.0 out of 5 stars
This is one of the best movies ever made. No previous "Star Trek" experience required!
Verified purchase
This is one of the best movies ever made. This will stand the test of time because the story & the acting and the directing make this a pleasure to watch. The plot of collecting two whales while saving the earth in the future is epic but the twists and turns of dealing with the culture of the 1980's is laugh out loud fun. The transparent aluminum factory is just hilarious. Jillian's touching emotion and devotion to saving "her" whales makes her just curious enough to put aside her doubts about men from the future and put her trust in a life-saving spaceship she can't even see. Leonard Nimoy's directing brings a warm and personable performance from all the actors much beyond what we have seen before. Between the humor and the comradery, the movie touches the best emotions in humanity. If the Oscars were serious about getting out of their stuck-up attitudes, they would have a hall of fame Oscar for movies just like this.
9 people found this helpful

Zero CoolReviewed in the United States on April 16, 2019
5.0 out of 5 stars
"What year is this? They're still using money!"
Verified purchase
This would be my favorite of the original series movies. Especially the medical part where Bones is calling our doctors, "Butchers!" This movie also led me to the discovery of just how bad the people of America have been lied to their whole lives. Well, between that and what my mom told me after 20 years with the department of Defense, not long before our joke of a health care system could do nothing for her but tell her when about she was going to die. It doesn't matter though. If I had proof, I'd be silenced, and since I don't, I'm automatically a conspiracy nut. I will say that there are quite a few of conspiracy facts out there, and they will eventually come out, just like science fiction becoming science fact! If you've already seen this once, then you know about how they need transparent aluminum at some point. Well, it happens to be science fact now! I believe they are only able to make very small pieces so far, but still, I think that's pretty cool.
13 people found this helpful

DafReviewed in the United States on June 10, 2020
5.0 out of 5 stars
The Purest of the Star Trek Movies
Verified purchase
A lot's been said about this breakout smash for the Star Trek movies over the years since its release, including the common misconception that Star Trek IV represents a major departure for the series. On the contrary, 'The Voyage Home' may well be the most purely "Star Trek" of all the films: our heroes are on a mission specifically to seek out new lifeforms in a strange civilization using teamwork, logic, crazy technology, wits, and a little bit of Kirk swagger to solve galaxy-threatening problems and learn a little something in the process, all while boldly going where no one (certainly in the 23rd century) had gone before.

DorothyZReviewed in the United States on July 6, 2017
5.0 out of 5 stars
Hands down the best Star Trek movie
Verified purchase
Hands down the best Star Trek movie. You can't help but love the crew of the Enterprise even more after watching this. Great story and the fact that they are able to poke fun at themselves with the fish out of water story is wonderful. This movie NEVER gets old.
29 people found this helpful

danielnewhouseReviewed in the United States on December 26, 2018
5.0 out of 5 stars
Time travel
Verified purchase
How fast do you need to go? It takes a slingshot around the sun. The readout on the Klingon bird of prey is "-244." This from anagrams on the Stargate cartouche translates to 5,000,000 in arabic numbers. So, you have to get up to warp 5,000,000 to travel back in time. On the return trip, they agonize over the exact weight to return to the exact moment in time when they left. They make a guess. And it works.
7 people found this helpful
See all reviews
Back to top
Get to Know Us
Make Money with Us
Amazon Payment Products
Let Us Help You
EnglishChoose a language for shopping. United StatesChoose a country/region for shopping.
© 1996-2021, Amazon.com, Inc. or its affiliates