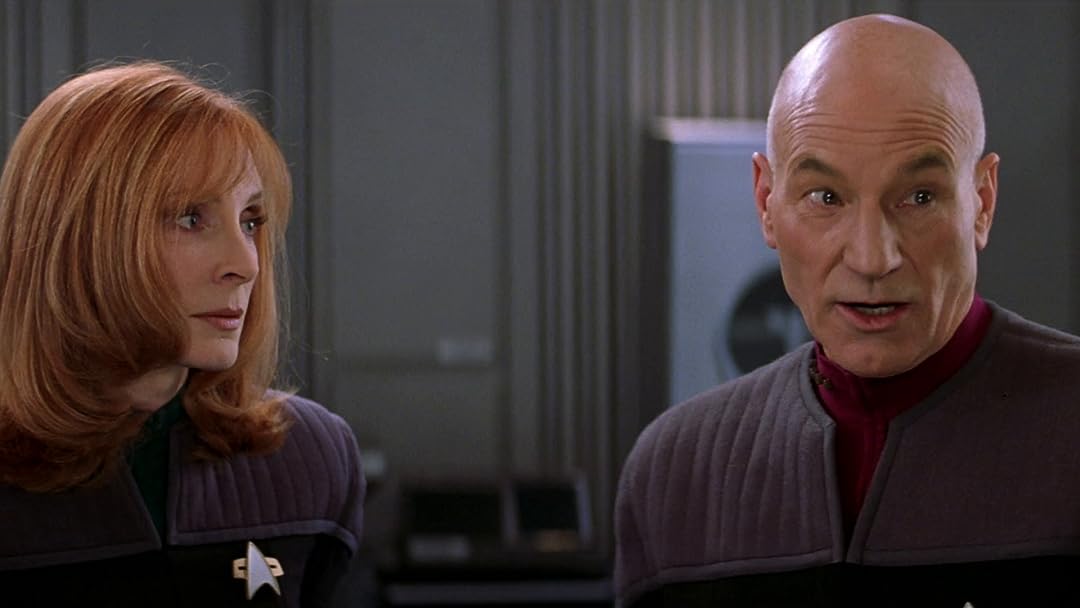 (2,725)
6.41 h 56 min2002X-RayPG-13
After the Enterprise is diverted to Romulus, supposedly to negotiate a truce, the Federation discovers the Romulans are planning an attack on Earth.

Leaves Paramount+ in 10 daysRentals include 30 days to start watching this video and 48 hours to finish once started.

Anna MeadowsReviewed in the United States on January 23, 2020
4.0 out of 5 stars
Poignant, and better than the reviews say it is
Verified purchase
I'm sure I'm not the only one who watched this movie in late 2019/2010, getting ready for Star Trek: Picard. Like other folks, I'm sure, by the time 2000 rolled around I had drifted away from "Star Trek" and never saw it this 2002 release. But "Picard" has rejuvenated my inner fangirl, and the events of "Nemesis" are referred to in the new show.

I liked it so much more than I thought I would. It was fun to see Captain Picard with a broader range of emotion, including humor and even teasing. B4, the android, is a heart tugger, having a childlike mind (almost like Lal) in a body that looks like Data's. The action scenes were fun and the special effects looked good on my home screen. And it was a great tie-in to the new show.

I can see the criticisms. On reflection, I can sense there were scenes that got cut and weren't fleshed out as fully as they might be. But during the movie I really didn't notice. Look, watching "Star Trek" in its many forms is often an exercise in "why didn't they do xxxxx." Same with a lot of science fiction-y shows. It's useful to just deactivate that part of your brain, sit back, and enjoy the action and the great chemistry between these actors who had worked with each other for 15 years at that point.

G. GeeReviewed in the United States on June 22, 2016
4.0 out of 5 stars
An underrated gem that deserves a second look
Verified purchase
Like many others I was underwhelmed when this movie was first released in 2002. However when I watched it the other day I have grown to appreciate it. The worst part of Nemesis was the timing when it was originally released as it was an unfortunate victim of franchise fatigue and a release date only a few days before Lord of the Rings: The Two Towers. Otherwise it really is a decent entry in the series which has a good story and by far the best special effects and action sequences of any of the Next Generation films that still look great 14 years later. In contrast, the special effects of First Contact and Insurrection were terrible even for the standards of the day. The only thing about Nemesis that still bothers me is the fact that Tom Hardy, despite a great performance looked nothing like a young Patrick Stewart. In retrospect they should have had Sir Patrick play both roles. All in all, it is the second best (behind First Contact), of the Next Generation films and it is certainly worthy of the top 5 or 6 of all the Star Trek movies.
35 people found this helpful

Steven ChristieReviewed in the United States on April 1, 2020
3.0 out of 5 stars
Star Trek: Nemesis
Verified purchase
Poorly written. Plodded slowly along. Killing off Data was unnecessary, stupid, and added nothing to the story at all. A decidedly poor effort at a send off for a really wonderful cast. Recently seeing some of them in CBS's Picard made me nostalgic for the old days. I actually missed them.

I was a fan of TNG during its initial run but lost interest after Generations and never saw any subsequent movie until this. Glad I didn't.

Now, I strongly suspect, had there been another movie, that Data would have been found somewhere in the positronic matrix of his dim-witted brother and the whole gang would have been back together again.

Indeed, we waited 18 years for CBS's Picard to reveal that Data in fact was in his brother's brain all along until later being downloaded to a quantum simulation upon his brother's disassembly by their creator's son. (hope I got that one right). He never got another body in which to live again. Tough break for Data.

For this movie, however, the cast gets 5 stars for being their wonderful selves. The directing and script get 1 star for being pretty terrible. The writers and director should have been sent to a Klingon prison planet for that effort. Average of 3 stars.

FridaReviewed in the United States on February 4, 2020
5.0 out of 5 stars
What is the problem?
Verified purchase
I watched Nemesis after reading dozens of poor reviews about how bad it is. WTF? People are Crazy! Nemesis is every bit as good as the other 3 Movies IMO. You should watch all 7 seasons of TNG then the 4 TNG Movies First before Picard, they're all connected. If you can't wait, then it's highly recommended to AT LEAST watch all 3 Star Trek TNG Movies (especially Nemesis) before watching Star Trek Picard.

I highly recommend watching all those BEFORE watching Star Trek Picard. Glad I did, they're connected, especially Nemisis. Highly Recommend ALL OF IT.
9 people found this helpful

G. CurtoReviewed in the United States on October 15, 2019
1.0 out of 5 stars
THE FILM SO BAD IT PUT THE ENTIRE STAR TREK FRANCHISE INTO A 7 YEAR COMA!
Verified purchase
I have been a near life long Star Trek fan. I was an activist fan and started going to the conventions in the 70s. Watched the spinoffs series The Next Generation, Deep Space Nine, Voyager, and as much of Enterprise as I could stomach (1 1/2 seasons to be exact). Please, believe me when I tell you Star Trek: Nemesis is terrible and should be avoided as it is an uninspired, unoriginal and cynical piece of filmmaking.

Probably this film's biggest sin is it's unabashed attempt to clone Star Trek II: The Wrath of Kahn. Unfortunately it doesn't have the organic magic of chemistry, time and context. It simply doesn't have the real world history that Wrath of Kahn had, and so the makers of Nemesis tried to fake the recipe with artificial ingredients. The end result was something that looked and felt forced and totally, painfully contrived.

It has been said repeatedly that Director Stuart Baird was unfamiliar with Star Trek and had never seen an episode of The Next Generation, however, I'm sure the studio made him study Star Trek II: TWoK. I'm also sure, based on an interview with screenwriter John Logan I read at the time, the studio gave him a laundry list of what they wanted and didn't want that steered him in only direction - The Wrath of Kahn.

The second biggest problem, I believe, that sunk this ship was the overindulging and excessive input of Patrick Stewart and Brent Spiner. Just because they play their roles superbly does not mean they understand the appeal and phenomenon of Star Trek because they continually demonstrate that they don't. Don't forget this movie was preceded by the awful "Star Trek: Insurrection." In fact, out of the four films centered on The Next Generation cast only "Star Trek: First Contact" was good (fortunately it was very, VERY good!).

It is a shame that this installment turned out as poorly as it did for it was loaded with talent. John Logan writing the screenplay. The casting of Tom Hardy and Ron Pearlman. Not to mention the regular cast of TNG. I mean Star Trek isn't perfect, they have done a consistently excellent job when hiring leads for their TV series (as with tribbles, however, you just don't want to over feed them lest their egocentric demands for input multiplies the problems in creating an acceptable script).
8 people found this helpful

BixReviewed in the United States on March 13, 2021
2.0 out of 5 stars
Shark Hath Been Jumped
Verified purchase
Yeah, I am a "Trekkie", so this is a tough review to write.
I'll keep this short.
1. Solid premise and 70% of film is fine.
2. The super weapon. Extremely POOR writing. Why should a biological weapon of such magnitude work in about 7 seconds in the Romulin (sic) Senate Chamber, but over EIGHT minutes from a battle-designed star ship?! (The bad-guy star-ship ends up looking like one of my Yagi HAM radio aerials).
The horror of this weapon's initial description is not lost on a student of Hiroshima. —E.g., a singe molecule can wipe out an entire species. Great premise/writing, BAD CGA. REAL BAD CGA.
3. Point #2 leads to this complaint. At about 70% of the way through this ciné film, the CGA mavens go into hyper video game mode, —thus, all of the human emotion and human conflict becomes an expensive and immature cartoon.

I pray that the single DGA trainee (were they sure they could afford enough budget for a SINGLE DGA trainee?), and other interns on this catastrophé got their AFTRA cards or other career emollients; because, little else of a this ciné film product that might live forever in Citizen Kane Land, made it through the over enthusiastic CGA 'drones', —probably hyped up on too much coke?

Conclusion; Digital technology dost not make a great ciné film. "The Day The Earth Stood Still" was made with cardboard and tin foil miniatures, yet it holds up far better than this Star Trek bomb. "The Day The Earth Stood Still" has serious history legs and remains a far better film than this Star Trek explosion of poorly considered technology. I really should have given this ONE star, —but the first half of the film poised a decent premise, however WASTED on CGA.
Are you listening Star Trek Corporation?
I am of the generation (over 60) that made the original TV programme a hit. —Not as socially relevant nor humourous as The Beverly Hillbillies (seriously), or The Prisoner. But, the original Star trek AND Voyager remain the best Star Trek products because of the WRITING, —NOT because of the CGA, nor the video game quality of the last 30% of this film.
You jumped the shark about 70% of the way through.
2 people found this helpful

Jason MartinReviewed in the United States on April 21, 2021
5.0 out of 5 stars
Another Satisfying Trek
Verified purchase
This isn't the best Star Trek episode, but it's still better than most other movies out there. I think a lot of people remembered how exceptionally good Star Trek: The Next Generation was, and they gave this poor reviews because it didn't measure up in comparison. But that doesn't mean this wasn't enjoyable.

People should get some perspective... most other TV and movies are pretty bad compared to even the worst Star Trek episodes (assuming we're only looking at The Next Generation, Deep Space Nine, Star Trek: Enterprise, and Star Trek: Voyager).

I was also pleased that the film appears to have worked perfectly with my new ultrawide (3440x1440) monitor. No hassles... just a beautiful Star Trek episode with a crisp & clear high resolution image.

Bearing all this in mind, I think my 5-star rating is justified.
3 people found this helpful
See all reviews
Back to top
Get to Know Us
Make Money with Us
Amazon Payment Products
Let Us Help You
EnglishChoose a language for shopping. United StatesChoose a country/region for shopping.
© 1996-2022, Amazon.com, Inc. or its affiliates