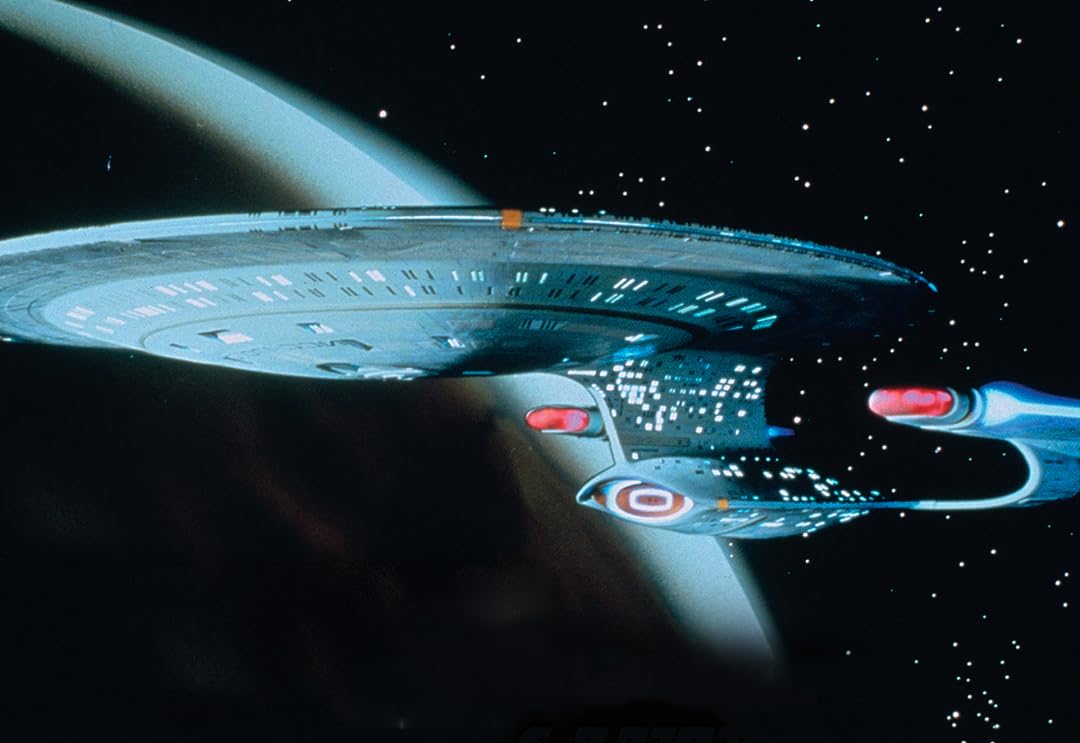 Star Trek: The Next Generation

(1,591)8.61991X-RayTV-PG
In the fourth season of the hit "Star Trek" spinoff, the crew of the USS Enterprise continue their voyage through space as Wesley Crusher (Wil Wheaton) departs for Starfleet Academy, Data (Brent Spiner) finally meets his creator and much more.

M. GamezReviewed in the United States on May 6, 2021
5.0 out of 5 stars
A Superb Season to overtake original Star Trek.
Verified purchase
A continuation of the artwork, special effects, and Borg continues. Seven Emmy awards prove that Screenplays are vital for a series to continue. Emotional send offs and Vital episodes are what we needed. Best Series of the entire Next Generation. Fans, Engage!
2 people found this helpful

C. GregoryReviewed in the United States on January 27, 2014
5.0 out of 5 stars
Great to have these seasons on blu ray
Verified purchase
These look and sound great and have tons of extras. I love the presentation and design. And I love the thin packaging, nothing too bulky. I wish all seasons of tv came in these types of cases. I can use the extra room on my dvd shelves. Since most people who are reading this probably already know that the show is great and what happens in each season (probably even more so than I do). I won't go into a detailed analysis on the episodes except to say the writing is even better (the first two seasons seem to lack direction and were sometimes too derivative of the original series, but the third and on they found their own footing and just kept getting better and better). The work they did on recreating some of the special effects (watch the bonus features on disc one where they tell you just what was involved in putting these episodes on blu ray and you'll appreciate it a whole lot more). While TOS updated their special effects for hd and included both versions on the blu ray, these sets had to recreate from original elements some of the original effects due to the way they were composited at the time. Some of the effects are "new" but to be honest they look more realistic (as with the planets). They keep everything basically the same when they can though. Only when it's necessary do they change anything. Overall this is a great series and a must have for any sci-fi fans. I can't wait until deep space nine comes out.
4 people found this helpful

bratcat22Reviewed in the United States on August 5, 2018
4.0 out of 5 stars
A Great Season of Star Trek
Verified purchase
Star Trek TNG hits it's stride with the second part of the third season cliffhanger "Best of Both Worlds". The season ends with the hint of a reappearance of a former crew member ,or is it?, and the possibility of a Romulan/Klingon War. I got this DVD set because of it's compactness.
3 people found this helpful

K. WyattReviewed in the United States on September 8, 2002
5.0 out of 5 stars
Warp engines engaged Captain!
Verified purchase
Season four, what a treasure. This is the first full season where, when you watched every show all you could say to yourself was "that was great." This is the season where, as stated above, their warp engines were fully engaged. The writing staff did a great job with every episode. Patrick Stewart just continue to shine as Captain Picard. We start off with the climatic, yet somewhat melodramatic ending of "Best of Both Worlds." All summer long between the seasons, I kept asking myself, how are they going to get out of this one? What a great two part episode, that honestly could've been on the silver screen. The only problem I had with this season, was a personal one. It was right at the beginning of Desert Shield and I could only get taped shows. Season four was also truly the season of family, we finally get to meet so many people who had only been briefly mentioned. The most poignant episode of the season "Family." They had to address everything that Captain Picard would be feeling after becoming Locutus and doing the things he was forced to do. Truly a fine episode. Some highlighted episodes of season four:
Best of Both Worlds Part 2
Brothers
Family
Remember Me
Reunion
Furture Imperfect
Final Mission
Data's Day
The Wounded
First Contact
Galaxy's Child
Nth Degree
Qpid
Half a Life
The Mind's Eye
In Theory
Redemption Part 1
One of the true gems of the season was Chief Miles O'Brien getting more airtime, which led to his inclusion in Deep Space Nine. He is one of the best Star Trek characters to date. Overall a great season and more than just a taste of what's to come in the following years.

J. F. CramerReviewed in the United States on November 3, 2002
5.0 out of 5 stars
Better than season 3 and leads the way to wonderful season 5
Verified purchase
After the splendid third season, which kept most people wanting more after the season finale, the fourth season rolled along smoothly with high expectations from viewers. The basis of "character-development over action" was greatly improved upon and put to more use here, even though there are some great action episodes.
The fourth season got to a tremendous start with many action-packed and essential episodes:
1) "THE BEST OF BOTH WORLDS, PART II. Like the first part, that episode has great music, action, acting, plot, and suspense. Although the first part os just a tad bit better, the second part has all you expect from a borg episode: Spaceship fights, good special effects, stuff exploding, phaser fights, etc.
2) "REUNION." (The second episode out of four in the Worf saga) After Sins of the Father, what I consider to be the first part in the rough quadrilogy involving Worf, came "REUNION," which is even better than the first part. Worf's girlfriend comes back (along with his unexpected son) and so do many characters from the "SINS OF THE FATHER" as Worf must confront old enemies and try to gain back his honor. Directed by Jonathan Frakes, this episode has great special effects, good acting, and a great fight at the end. Bring on the third part!
3) "REMEMBER ME." A great episode which emphasizes on Dr. Crusher. Although this episode is not really known for its action, it does have cool concepts and great suspense.
After those ground-breaking episdoes, there were more character-based and humorous episodes.
1) "DATA'S DAY." I can't say enough about how great this episode is. All of the characters have funny lines, Chief O'Brien gets married, and of course anything with DATA in the title has to be good.
2) "BROTHERS." Yet another Data episode, this brought back Lore and his creator, Noonien Singh. The chemistry between the characters is great in thie episode. Brent Spiner plays THREE roles, all on screen at the same time.
3) "Q-PID." Any episode with Q in the title has be good, and this one is great. The Trek crew goes on a Robin Hood adventure. Worf has some great lines in the episode.
4) "THE MIND'S EYE." A Trek remake of The Manchurian Candidate, this episode emphasizes on La Forge and shows he CAN say some great lines of dialogue besides techno-babble.
5) "FAMILY." Here we meet Worf's adoptive parents and Picard's brother. Some great scenes in this episode, especially the mud fight between Picard andhis brother.
6) "THE NTH DEGREE." This episdoe features Lt. Barclay in antoerh humorous episode, though it's a bit more complicated that the last Barclay episode.
7) "IN THEORY." This is (another) a great Data episode. Basically, he puruses a relationship with a female officer aboard the Enterprise. A very funnny episode that shows that Data is NOT gay.
8) "FINAL MISSION." A great episode which bases on Wesely Crusher and Picard. Will Wheaton is great in this episode.
The season ended with a great cliffhanger: "REDEMPTION." The third part in the Worf quadrilogy, this episdoe retunrs old characters from "SINS OF THE FATHER" and Worf conintues his quest to restore his family honor. Worf's brother also makes another appearance. Filled with great special effects, action, and acting, it will have you biting your nails until you get the second part on the fifth season gift set. Also features a great ending and a Tasha Yar connection through her alternate demise in "YESTERDAY'S ENTERPRISE."
All in all, better than season 3 but will still be surpassed by season 5.
1990-1991; 21 hours; All episodes are rated PG for mild violence and brief language.
30 people found this helpful

Thomas BReviewed in the United States on January 29, 2014
5.0 out of 5 stars
A great update to a classic
Verified purchase
I have home theater and project onto a 92" screen with a decent 7.1 system. These re-released blurays take an old grainy memory and turn them into gorgeous pixel-perfect high definition and essentially bring new life to the series which was shot on film, but broadcast in standard definition.

The beauty of old series being shot on film is that they can be scanned at a higher resolution even 4k or beyond and that old detail can be brought up to today's standards.

The producers of this series did not stop there. After scanning in the film, the digital effects were updated. It's a spectacular upgrade to an old favorite. I was blown away and am happy with the purchase to say the least.

The show is still formatted 4:3, but I think it's a good thing.
3 people found this helpful

RVRReviewed in the United States on January 30, 2014
5.0 out of 5 stars
Probably the Best Season of the Seven
Verified purchase
To me, seasons four and five of Star Trek: The Next Generation were the pinnacle of the series. These are the episodes that defined the series and made it stand on its own as a great television series. You have a lot of great episodes, many of them revolving around family themes. We see Picard interact with his brother after the Borg incident, and confront his personal failure to stop the Borg from controlling his mind. Worf is confronted with his child Alexander in a powerful Klingon episode. The father / son relationship between Picard and Wesley is explored in Final Mission. Although sort of a low-key episode, one of my personal favorites is Data's Day. If I could only own one season of ST:TNG, this is the one I would buy.
3 people found this helpful

Reacher CreatureReviewed in the United States on January 16, 2014
5.0 out of 5 stars
Fantastic transfer
Verified purchase
I'm not going to bother going over every episode, other reviewers have done that.

First off, the transfer is fantastic! The colors and sounds are sharp and crystal clear. It's just amazing on how awesome this looks and sounds. The stories are fantastic. Even if you've seen them, as I have, when you see the blu ray, it's like you're watching them for the first time.

Second, the stories are just fantastic. They'll keep the trekkie in all of of hooked to the screen.

If you know a trekkie in your life, or if you're one yourself, then get it. I know you or your trekkie won't be sorry. I know I wasn't. I look forward to when I can sit down and enjoy an episode.
5 people found this helpful
See all reviews
Back to top
Get to Know Us
Make Money with Us
Amazon Payment Products
Let Us Help You
EnglishChoose a language for shopping. United StatesChoose a country/region for shopping.
© 1996-2021, Amazon.com, Inc. or its affiliates