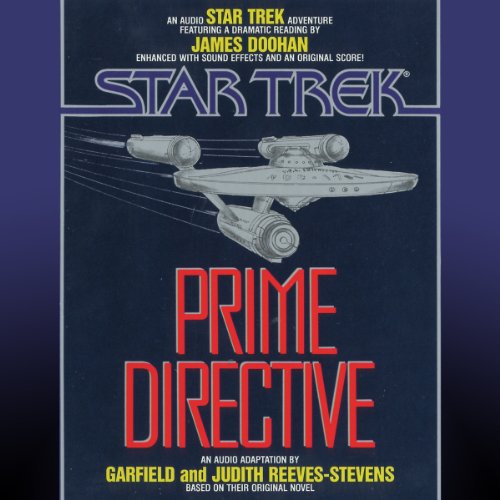 They call it Kirk's World, a once vibrant planet reduced to a post-nuclear horrorscape because of James Kirk's failure to obey the Federation's most important law: The Prime Directive. But was Kirk really responsible for the destruction of the planet Talin, or was some other, far more sinister force at work? While a bearded, exiled Kirk struggles to regain the command of his ship, his former crew membrs are banding together to fight for their honor and their careers. The future of the Enterprise is at stake - and the truth of Talin's Armageddon is far more frightening than anyone can imagine.

Your audiobook is waiting!
Learn more about membership
List Price: $10.35
You Save: $1.36 (13%)
By completing your purchase, you agree to Audible’s Conditions Of Use
Sold and delivered by Audible, an Amazon company

CHARLES E KELLY
5.0 out of 5 stars Brilliant Sci-fi in a Star Trek wrapper.
Reviewed in the United States 🇺🇸 on May 7, 2022
Verified Purchase
This book has everything a trek fan is looking for. A compelling story with enough plot twists to keep the reader coming back for more.
Read more
Helpful
Report abuse

Kindle Customer
5.0 out of 5 stars Great book
Reviewed in the United States 🇺🇸 on May 9, 2022
Verified Purchase
All the characters were spot on. Very well written keeping you engaged throughout the story. I want to read more from this author.
Read more
One person found this helpful
Helpful
Report abuse

Dave H.
4.0 out of 5 stars Very edited down, but great read by James Doohan
Reviewed in the United States 🇺🇸 on October 16, 2020
Verified Purchase
This is a classic Trek novel, but I highly recommend reading the original novel if you haven't read this before. This version removes at least four major subplots for time and creates plot holes as a result.

James Doohan does a great job with the read and it's always good to hear him if you're a Trek fan though.
Read more
One person found this helpful
Helpful
Report abuse

Z. Theodorou
4.0 out of 5 stars The cohesiveness of the Star trek team won!
Reviewed in the United States 🇺🇸 on September 17, 2020
Verified Purchase
From the dismantlement of the the original team and the damage to the Enterprise, there seemed no hope to resurrect both the ship and the team. But their dedication and pure force of conviction to prove they were not guilty of charges against them of not following the Prime Directive took them across the universe to gather evidence to vindicate them.
Read more
Helpful
Report abuse

TR Jensen
5.0 out of 5 stars One of the Best!
Reviewed in the United States 🇺🇸 on October 12, 2021
Verified Purchase
In some trek novels it feels like the main crew are merely guest stars. But this book puts them all front and center in a fun and interesting adventure. Loved it!
Read more
Helpful
Report abuse

Jason Page
4.0 out of 5 stars Good Trek novel
Reviewed in the United States 🇺🇸 on June 2, 2019
Verified Purchase
The ease of the ending had me drop my rating from 5 stars down to 4, but a good Star Trek story. Lots of great moments from each member of the original series characters. Good story that was very close to being great
Read more
Helpful
Report abuse

resol
5.0 out of 5 stars You will never suspect!
Reviewed in the United States 🇺🇸 on April 29, 2019
Verified Purchase
Beware! Actually I have maybe one critcism. A key character, suddenly drops out, we'll a group of characters, the San Francisco Radicals failing to repeal the Prime Directive, that were crucial.to the campaign, suddenly disappear . We don't know where they are or what they might be doing. Whereas supporting characters, have been resolved. Beginning with the punctilious, irascible little Napoleon, Lt. Styles
Read more
Helpful
Report abuse
See all reviews

Amazon Customer
1.0 out of 5 stars It's worse than that, it's a terrible book, Jim
Reviewed in the United Kingdom 🇬🇧 on November 28, 2019
Verified Purchase
I'm really sorry, fellow Star Trek people, but these books are turning out to be a real disappointment.
Once upon a time, I know I enjoyed the James Blish and Vonda McIntyre adaptations, and one really good Diane Duane TNG spin-off, and mainly thanks to bookbub I keep chasing that memory in discounted Star Trek ebooks, and they keep turning out to be - politely – meh at best.
I ground through this one on the basis of the 5 star reviews, and the fact that it's a depressingly rare thing to find modern Trek content prepared to put Kirk front and centre. And I am. A fan. Of. The. Ever more meta. Mr Shatner.
But Heck's Bells this is awful.
For those who have been spared, it's Death By Exposition. The story is a pair of bookends around a notional TOS “4th season” episode in which there's a catastrophic alleged failure to follow the Prime Directive.
To make their story work, the writers invent what my ST experience says is a complete, new continuity involving Starfleet First Contact policy, the basis of all warp and Federation technology, and a system of assessment and monitoring of civilizations that are not quite ready for Prime Time.
The first half of the book, which was all I could stand to read, is a truly mind numbing series of redundant, deeply technical, explanatory conversations between people who already know stuff. Imagine the Phantom Menace opening but without the borderline racism or laughs.
The character writing, ironically with the exception of Spock, borders on "Have you ever actually SEEN the show?"
I've since bought the Kahless and Spock’s World "Signature Edition" double reprint volumes in a deal. Luckily it was recently enough to qualify for a refund.
Never again.
Read more
3 people found this helpful
Report abuse

Christopher morgan
3.0 out of 5 stars Higher rating of the start wasn't a mess
Reviewed in the United Kingdom 🇬🇧 on September 13, 2020
Verified Purchase
so this book started back.to front. Post event details and the consequences were told first,without the details of how. It made me think I missed a book in a series of connected books it was so badly done.however when it got to how it happened in the book it got better. If the book had of done a proper linear time instead of bumping back and forth I would of liked it more
Read more
One person found this helpful
Report abuse

Barry Hazel
2.0 out of 5 stars Somewhat disappointing
Reviewed in the United Kingdom 🇬🇧 on October 12, 2022
Verified Purchase
The authors of this book have a decent star trek pedigree but the plot of this book is somewhat disappointing.
There is no real protagonist for Kirk to deal with.
The writers do capture the characters with great skill but the poor plot leaves the book down. Bore fest
Read more
Report abuse

Ian Titler
5.0 out of 5 stars When does prime Directive apply?
Reviewed in the United Kingdom 🇬🇧 on October 31, 2019
Verified Purchase
Good story revolving around the Enterprise regulars and when the Prime Directive is/isn't breached, and if/when humanitarian aid can be given. Some very interesting issues raised as the main plot proceeds.
Read more
Report abuse
See all reviews