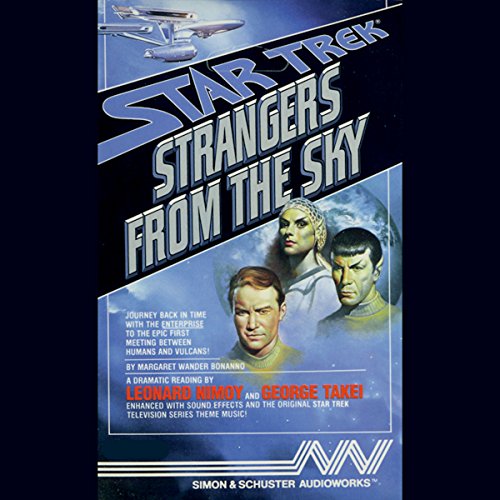 In the late 21st century, humanity has united after countless years of warfare, and turns toward the stars. But when an alien spacecraft crashlands in the South Pacific bearing visitors from another world, the Vulcans, Earth must decide whether to extend the hand of friendship or the fist of war.

In the distant future, horrible dreams torment Admiral James T. Kirk, dreams prompted by his reading of Strangers from the Sky, a book about that historic first contact. He dreams of an alternate reality where he somehow changed the course of history, and destroyed the Federation before it began.

MereChristian
5.0 out of 5 stars "First Contact" Was Earlier Than Anyone in the Star Trek Universe Thought
Reviewed in the United States 🇺🇸 on January 20, 2013
Verified Purchase
There are so many "what if" scenarios in history, that we often wonder what might have gone differently if some seemingly seminal event had transpired differently, or not at all. Of course, in real life, this is just conjecture on all of our parts. The idea of taking a fictional world, using a "what if" scenario and writing with (relatively) free reign, is gratifying in ways that such real-life "what if" questions can not be, for it allows us to answer this question.

This is part of why I, and so many others, have enjoyed the book, Strangers from the Sky, by Margaret Wander Bonano. First published in the mid-1980's, it has become a classic Star Trek novel, and almost the standard of what a good Trek novel is. The book is essentially a story within a story.

The fictional "history" in the novel (which would later be retconned by the 1996 movie Star Trek: First Contact) is that the Vulcans had finally revealed themselves to Humankind when the crew of an Earth space vessel stumbled upon a damaged Vulcan science research ship. This happens in the Trek universe in the year 2065. Every Federation citizen from the youngest on up to the oldest, knows this to be true. The truth is that every Federation citizen is wrong according to a new book that Admiral James T. Kirk's fellows officers and enlisted personnel (and most other Federation citizens) are reading and raving about. The book, Strangers from the Sky, alleges that two Vulcans visited Earth and were evacuated by rescuers nearly two decades before the official "first contact", AND that this was all covered up by both the Vulcan and Earth governments.

At first, Kirk resists the pressure to read the galactic best-seller that Bones McCoy attempts to recommend to him, but after enough times of having the new "history book" foisted on him from every direction by every person he knows and works with, Kirk finally says no mas and decides to read it after all. That's when the trouble begins.

Kirk begins having dreams and nightmares of the events of the novel, and firmly believes that he lived through them. Captain Spock, sensing his friend's distress, begins having his own nightmares as well, similar to Kirk's, but with his own scenarios. This is despite the fact that Spock is out in space training cadets on board the Enterprise and hasn't spoken to Kirk (who is in San Francisco at Starfleet HQ) for some weeks, and thus has no clue what ails him.

Of course, this gets them both in serious trouble, as their mental stability is called into question. Others rightfully ask how they could possibly "remember" events that took place long before they were even born. To prove their sanity, the two must delve into their memories via Vulcan Mind Meld, and record what really happened on a scouting trip long ago at the beginning of their acquaintance as they originally began a certain five-year mission....

So begins a Star Trek story with so many elements (including magic, fantasy, science-fiction, time travel, speculative fiction) that only an author of Bonano's caliber actually could pull it off. Despite it's quirkiness, the story is beloved by fans, and for good reason. It is not the same typical Trek story that everyone is used to reading or watching (not that such stories are not great themselves, understand), because the "action" is extremely limited to one incident in the last couple of chapters. This story relies for it's success on the strong narrative, characterization, and the sense of wonder that epitomizes the franchise.

Not that everything was perfect in the tale. Bonano seems to have a bit too much fun making comedy at McCoy's expense in the book, and that annoyed me, as McCoy is one of my favorite characters. The author seems to include a few potshots at political and cultural ideas that are not necessary to the story. Whether this her trying to stay somewhat faithful to Roddenberry's concept, or her own political bias is unclear, but it does get annoying after a while, especially since, again, it did not need to be there. It gets old quickly to have the internationalist "political" angle gotten into specifically, instead of generally, as usually happens, in Trek stories. That said, the author joins other Trek authors and creators in being somewhat more friendly towards religion than were Roddenberry's more hard-line atheist views. That was much appreciated. All in all, a great read.

Duane Brodnick
4.0 out of 5 stars WHAT WAS I THINKING THE FIRST TIME?
Reviewed in the United States 🇺🇸 on April 15, 2020
Verified Purchase
I remember trying to read this book years ago before the days of the Kindle. I found the book back then boring because of the time travel. This time around I was totally absorbed. First, the book was written before the series became canon. It took place just after Kirk took over command of the ENTERPRISE and before the second series pilot, WHERE NO MAN HAS GONE BEFORE. We also saw the characters as they were still in development. Kirk was still in his 'freshman' mode, still learning about his crew and the operation of the ship. Plus, he was treading on egg shells around Spock. He had never been around Vulcans before. He didn't know how to handle him. There was also a lot of backstories about the characters. Gary Mitchell, before becoming a 'super god', comes across as a easy going guy, who seldom let a situation get on his last nerve. He handled everything with a sense of humor. He was loyal to Kirk and would definitely die for the Captain. Doctor Dehner showed she was more than a 'walking freezer unit.' She was professional but showed she had a sense of humor. Dr. McCoy, who did not appear in WNMHGB, was already assigned to the ship but was on leave, so Dr. Piper covered for him. Uhura, Sulu and Rand either appeared briefly or was only mentioned. The surprise for me was Lee Kelso. He was more than in the second pilot where he was killed. He came across as a likeable character, and a 23rd Century hacker! He was like a kid in a candy store, being able to hack any computer, no matter what century it was from. I found himself disappointed that Kelso never become a regular character. He would had been an interesting addition to the series. Of course, it the series went in a different direction, what would they do with Sulu, and later, Chekhov? It was also interesting to see what Earth was alike after the Third World War. All was not totally 'united' on the planet, with conflicts erupting almost every day, almost everywhere. In conclusion, I enjoyed this book because it took the characters out of their comfort mode. I enjoy stories where you learn more about the 'background' characters. There are books about McCoy, Sulu, Chekhov, Uhura and Scotty. Will there be a background book about Yeoman Rand? Or even Captain Christopher Pike? I highly recommend this book.
Read more
15 people found this helpful
Helpful
Report abuse
See all reviews

Kindle Customer
5.0 out of 5 stars Vulcan go back in time
Reviewed in the United Kingdom 🇬🇧 on March 19, 2017
Verified Purchase
I really like James and Spock's developing friendship. It is fascinating seeing how they slowly build on it. To see the new aliens and the humans fine ship begin to trust each other, especially Sorahl and Yoshi begin to accept each other, followed by the others, makes you wonder what would happen if aliens came to Earth, as we hear about Americans in real life, supposedly hiding and possibly killing aliens in the past.
Read more
2 people found this helpful
Report abuse

John Walker
2.0 out of 5 stars Some good ideas, but not great
Reviewed in the United Kingdom 🇬🇧 on August 8, 2018
Verified Purchase
This didn't really work for me at all. It has some good ideas, but I didn't love how they were realised.

Ironically, I thought that Spock's storyline in the book was the most impactful and emotional.
Read more
One person found this helpful
Report abuse

jen at rubery
5.0 out of 5 stars Trekkie delight
Reviewed in the United Kingdom 🇬🇧 on January 25, 2015
Verified Purchase
As a confirmed Trekkie I have always thought this one of the best spin-off novels from the Trek franchise, since I read it years ago in paperback - lovely to have it in Kindle.
Read more
2 people found this helpful
Report abuse

Andrew G. Levitt
4.0 out of 5 stars A pleasure to read again
Reviewed in the United Kingdom 🇬🇧 on November 28, 2012
Verified Purchase
Read this in Pb about 15 yrs ago. Still enjoy it, very enjoyable and just as good as any of the plethora of Trek that has followed it.
Read more
One person found this helpful
Report abuse

Randy PEHLEMAN
3.0 out of 5 stars Interesting twist on Star Trek original series
Reviewed in Canada 🇨🇦 on November 23, 2021
Verified Purchase
As much as I like a good story about Captain Kirk, the original cast from the series from"Where no man has gone before" (seriously who would not like exploring crew members like Gary Michell and Lee Kiso) unfortunately this story never was explored in good old Star Trek fashion with a mission including all three before the current cast did the majority of the original series.
Yes this opportunity was wasted and then abused with the use of the lines from show that showed the death of Gary Michell and Lee Kiso.
Sorry it didn't work for me.
Read more
Report abuse
See all reviews