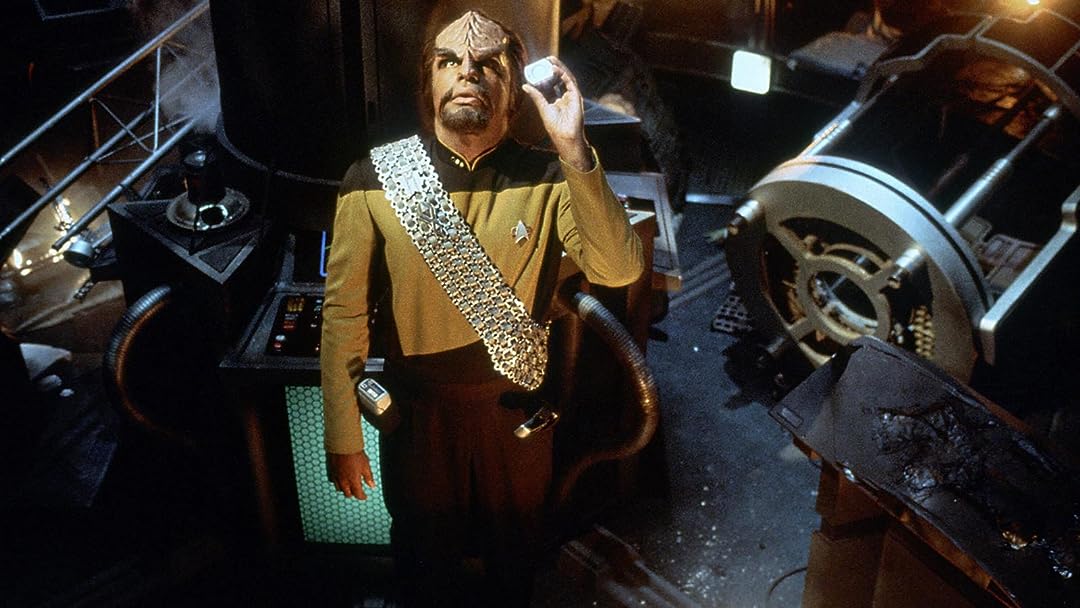 Until this movie, I never realized what an accomplished horseman Shatner is. In the scene with him and Patrick Stewart, what people don't realize is Shatner is riding his own horse on his own property and did his own jumping over the ditch, something he did often at that time with that horse. Stewart does not ride his own horse in this film but the saddle he grabs is his own, also being an accomplished horseman in his own right. To watch the equestrian interplay between the two actors is lovely if you have a decent grasp of equitation. Shatner's horse is not out of control at any time when he's dancing around. The actor is giving the horse very subtle cues to make the movements that it makes. Stewart is not just sitting there either. It takes an equal amount of horsemanship to keep a mount calm and immobile while another horse circles it that closely. To think they did this while reciting lines and doing scenes is amazing to me.

Zachary B.Reviewed in the United States on September 12, 2020
4.0 out of 5 stars
Basically a 2 hour TNG episode with movie effects.
Verified purchase
Saw this at original release in theatre with father and brothers when I was 12. Coming back to it now initially brought a blinding nostalgia that did fade a bit upon closer examination. Decent writing, though the general story was season finale (certainly not series finale) material at best and left much to be desired as a movie. The Kirk hand-off was nice to see, though even that was missing a bit of heart between the two captains leaving it as little more than a handful of shallow exchanges.

Star Trek First Contact was certainly more becoming and worthy of a movie status. Star Trek Generations wasn't much more than a genuine TNG stop gap that really could have delivered on much more. It's quite a good watch if you go into it right after the TNG series finale (or even just after the first few episodes in s1 of DS9) with similar series episodic expectations.

ibiReviewed in the United States on October 31, 2020
1.0 out of 5 stars
Silly Movie
Verified purchase
I grew up with the original Star Trek and have followed some of the movies and series that followed, but this is by far the worst movie I have seen thus far. Script and story line were bad, which is probably why the acting was equally bad even though we have seem some of them giving better performances. Overall, silly movie, with no redeeming qualities.
5 people found this helpful

Jason MartinReviewed in the United States on September 6, 2020
5.0 out of 5 stars
Very Impressive in HD
Verified purchase
When I started watching this, I was wondering at how good everything looked. So much detail compared to how I remember "The Next Generation" and the starship from that show. Then I realized this is HD. The HD quality definitely was nicely done here. I loved seeing all the sharp and detailed images on the ship I remember from the greatest Star Trek series ever: Star Trek: The Next Generation!

Also great to see Jean-luc Picard and the Enterprise crew once again! The old Star Trek shows like Star Trek: The Next Generation, Star Trek: Voyager, and Star Trek: Enterprise all had the best crews, and I just loved seeing my old favorites again. (Data especially!)

I am so glad I watched this, because I had actually been disappointed with the first two Star Trek movies I had seen from the saga starring Shatner. What a pleasant surprise! I am going to be looking forward to the next Star Trek movies for sure!

M. HeissReviewed in the United States on June 23, 2017
4.0 out of 5 stars
This is a great movie.
Verified purchase
A kid's review:

This movie is really something; a great plot line, characters from both Star Trek The Original Seriesand The Next Generation.

This movie is full of jokes. It has almost as many jokes in it as Star Trek IV: The Voyage Home.

Leigh DeaconReviewed in the United States on October 7, 2016
5.0 out of 5 stars
Nice Debut for the TNG Films
Verified purchase
A great film for fans of the original trek and TNG; the idea of the Nexus - a place where you can create your own reality - keeps drawing me back to this film. And one of the most honest and human death scenes of any film. The Amazon Prime version has some wonderful tidbits you can click on, such as information about the historical ship used in the TNG cast's opening scene, the ranch and horses used in Kirk's version of the Nexus, etc. Fun trivia, and a fun watch!
12 people found this helpful

SanteriaReviewed in the United States on June 24, 2006
5.0 out of 5 stars
An Excellent Collection: Superb Second Disc is Great
Verified purchase
GENERATIONS is the so-called Passing of the torch in the Star Trek Universe of the time of the movies release.
The movie is basically about getting the two Captains together to fight off an El Aurian Scientist who wants to live forever in the Nexus.The film is a great fun watch.Some of the minor criticisms about the movie really come down to who likes which version best. Well, as someone who thinks that There can be only one, Kirk, for me, is the only Captain, however, I can appreciate what Picard has done, but still my opinion is in favour of Kirk.
The commentary by the two writers of this movie is interesting, but not entirely fulfilling, still, it does live up to its entertaining task, which some informative commentaries never quite achieve.
THIS DVD: Great menus of the various options. Nicely done as well.Great Sections abound. In THE STAR TREK UNIVERSE, the tribute is excellent, and at points very touching. The creation of the Picard Family Album is at turns interesting, at turns funny to the point of silly, but all entertaining.
The Remaining features that cover Production, Visual Effects, Scene deconstruction, and also the Deleted Scenes, are all both entertaining as well as informative. It was informative to see the scenes that prompted the major re-shoot, and revealing to see why it was made necessary.
I now have Three Versions of this Film, Two on VHS, now this one on DVD. It is intersting to see that the cover is the best and clearest on this DVD 2 disc, and the British one has some very rare extras, and is a numbered release which I was very happy to get. Kirk is dead, long live the Captain of the Enterprise, Captain James T Kirk !!! Hopefully the rumours that the next film will have the young Kirk and Spock acted by other actors, but voiced by the originals. Certainly Shatner does some superb voice work... check out his Audio Books.

Please note: the SCE version DOES have the Theatrical trailers, so don't think you will miss that... it says so on the box, and its on the disc set I have.

And thanks again to AMAZON for making good on another USPS mess up where my DVD was damaged.The new copy was great, totally intact, not used as a football, and the quality is superb. KUDOS to Amazon !!!!!!!!
5 people found this helpful

Carole L. PresbergReviewed in the United States on July 27, 2021
5.0 out of 5 stars
Star Trek Next Generation movie on DVD.
Verified purchase
My husband and I have been watching all our old Star Treks and Star Trek movies over again. Many of them we have on tape, particularly the old movies. When I went to find this one, I looked everywhere and couldn't find it. So I bought it on DVD. It was just as good as I remember it. The last scene, where Data finds his cat, Spot, in the wreckage of the Enterprise is priceless.
See all reviews
Back to top
Get to Know Us
Make Money with Us
Amazon Payment Products
Let Us Help You
EnglishChoose a language for shopping. United StatesChoose a country/region for shopping.
© 1996-2022, Amazon.com, Inc. or its affiliates