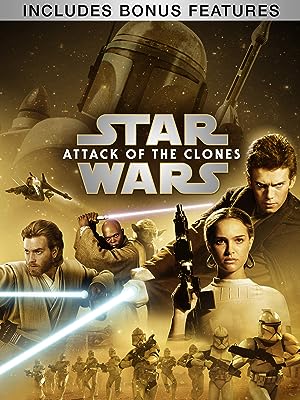 Star Wars: Attack of the Clones (Plus Bonus Content)

(5,507)
6.54 h 9 min2002PG
When Jedi apprentice Anakin Skywalker is assigned to protect Senator Padmé Amidala, he discovers his love for her…and his own darker side. Obi-Wan Kenobi uncovers a secret clone army as the galaxy marches towards full-scale war.

Save with with the Star Wars movie collection on Prime Video shop now.

Christopher HausmannReviewed in the United States on December 22, 2018
1.0 out of 5 stars
Awesome
Verified purchase
Had to have it in my collection! The main reason for the star subtraction is for Amazon not the movie!!!I just wish that Amazine would let me custom arrange my Video Library instead of only offering by date purchased or alphabetical order. I would prefer to arrange by genre, episode, number in franchise so that I could group my movies together instead of having a hodge podge to sort through!
11 people found this helpful

N SpiveyReviewed in the United States on October 19, 2017
5.0 out of 5 stars
Good reason to own this dvd--Yoda v. Count Dooku
Verified purchase
This is my favorite movie of Episodes 1-3. My favorite scene is when Yoda battles Count Dooku--I love that scene! I am old enough to have seen Episode III in the theatre back in 1977, and I still love to watch all of the Star Wars DVD's with the exception of Episode I, which I do not and will never own---Jar Jar BInks....enough said. I purchased a used copy of this movie and it was in excellent condition.
14 people found this helpful

Suzanne K. EndresReviewed in the United States on December 26, 2019
1.0 out of 5 stars
This dvd was PAL region Two. Cannot be watched on normal DVD players.
Verified purchase
I ordered this so we could watch the entire series before the new movie came out. Since I bought it in April but didn't watch it until December, I didn't realize it was PAL region two until too late to return it. I was able to get my old laptop to change regions so we could watch it, but I am not happy with this order.
5 people found this helpful

JasonReviewed in the United States on August 22, 2020
1.0 out of 5 stars
Please Don't Buy This From Amazon
Verified purchase
I'm a big Star Wars fan and wanted to finally collect these movies on blu ray. I bought them in new condition directly from Amazon so I assumed they'd be great. Unfortunately, this was not the case.

Both A New Hope, Empire Strikes Back, and Revenge of the Sith are all missing the slipcovers and it was just the blu ray box. Now it didn't explicitly say you get a slipcover for the blu ray but that's what the picture shows and it says NEW condition so I would assume I would get the original packaging.

And while Attack of the Clones did have a slipcover, it had clearly been water damaged and still had the leftover residue from a plastic label.

While the other two seem fine, I decided to not give amazon my business and just return all of them and get my money back. Although they are more expensive at Best Buy, I trust them a lot more at this point.

So if you're buying Attack of the Clones or any of them just to watch the movie then they might be okay for your needs, but if you want to collect these/display them on a shelf please do yourself a favor and don't buy them from Amazon.
One person found this helpful

Michael AdamsonReviewed in the United States on September 4, 2021
3.0 out of 5 stars
Great CGI - Bad character depictions
Verified purchase
Hayden C,'s depiction of a young Anakin Skywalker was at best...PATHETIC. This Jedi Knight on steroids turns out to be a totally mediocre powderpuff. Stuttering over the top dialog, non-stop self berating, complete whiner. I would have drummed him out of the Jedi academy. Ewan M. manages to barely pull off Obi Wan, but c'mon I think we deserved better from a premier class aristocratic enlightened warrior. I could go on, but why. Just watch the Clone Wars animated series instead. They kept edging closer and closer to the edge of what the series could have been before they were terminated in favor of the Skywalker Canonical which over the years has become utterly unbearable to watch even as a freebie. Oh well so much for deeper critical analysis. This was supposed to be Galactic War, total hegemony, ruthless subversive politics. They touched on it, but in such a rated G/PG manner it ruined it almost entirely.

aCityBoyReviewed in the United States on September 29, 2016
3.0 out of 5 stars
Love the Characters
Verified purchase
Love the Characters. Hate the schmaltzy love story between Amadala and Anakin. It gets lame. Anakin needs therapy. I prefer the CLONES WARS because there are several back stories and various characters that you don't get close to in the Star Wars movies.
Also, George Lucas did Clone Wars. Disney did Rebels. There's a difference people.
13 people found this helpful