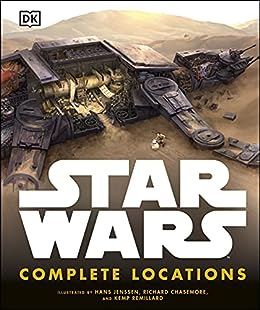 by DK (Author) Format: Kindle Edition
See all formats and editions
Sorry, there was a problem loading this page. Try again.

Includes more than 50 intricate full-color cross-section artwork and 3-D maps, this visual e-guide will take you into the incredible worlds and locations in the Star Wars™ galaxy.

From the towering skyscrapers of Coruscant to the terrifying technology of the Death Star, Star Wars: Complete Locations lets you see in astonishing detail the numerous worlds, bases, cities, landscapes, and battle sites from the Star Wars galaxy. Discover the secrets of the Jedi Temple Complex and tour Maz's Castle on Takodana.

With brand-new cross-section artwork from Star Wars: The Force Awakens™, Star Wars: Complete Locations is the definitive collection that takes you inside the world of the Star Wars saga.

We believe in the power of discovery. That's why we create books for everyone that explore ideas and nurture curiosity about the world we live in.

From first words to the Big Bang, from the wonders of nature to city adventures, you will find expert knowledge, hours of fun and endless inspiration in the pages of our books.

4.8 out of 5 stars
4.8 out of 5
528 global ratings
How are ratings calculated?
To calculate the overall star rating and percentage breakdown by star, we don’t use a simple average. Instead, our system considers things like how recent a review is and if the reviewer bought the item on Amazon. It also analyzes reviews to verify trustworthiness.
Top reviews

ParkaTop Contributor: Coloring
5.0 out of 5 stars Beautiful and informative book
Reviewed in the United States on October 18, 2016
Verified Purchase
The media could not be loaded.
This is like one of those intricate cross section cutaway artbooks that Star Wars have been publishing over the years.

Some of the content in this book may have been featured in other books but it's no big deal because this is now the definitive book on all Star Wars locations now.

The content is arranged from Episode I to the latest VII. It starts off with brief information to the galaxy and the planets, of which you can find more information in the other book Star Wars: The Essential Atlas.

The bulk of the book features the beautiful detailed illustrations of key locations and places featured in the films. The artists who contributed these amazing cutaway artworks are Hans Jenssen, Richard Chasemore and Kemp Remillard. It's a good thing that this 192-page hardcover is large enough to show all those wonderful little details in the art.

It's really cool to be able to look at the cross sections and be reminded of where you have seen the characters on screen. There are lots of moments where I went "Hey, that's the place where they stood!" While the film can only show a glimpse of the environment, with the drawings in this book, you can spend your time looking closely at the details, layout of buildings, bases, rooms, cities and aerial views.

In addition to the art, there are a good amount of film stills. All the visuals are heavily annotated. There are labels pointing to interesting spots in the drawings, captions that give background and movie recap. The thing that always leaves me puzzled is where are the toilets. I mean, where to all those people go to relieve themselves?

Since the last movie is Episode VII, there are new drawings included, such as for Jakku, Rey's Home, Maz's Castle, Resistance Base, Starkiller Base.

All in all, it's a really beautiful and informative book that all Star Wars fans should have.

(See more pictures of the book on my blog. Just visit my Amazon profile for the link.)

mk
VINE VOICE
5.0 out of 5 stars Eye Opening
Reviewed in the United States on September 30, 2016
Verified Purchase
Just an outstanding picture book full of "Complete Locations" from all the SW movies with cross sections, maps, beautiful drawings, fold outs and details about each.

Where to start? My daughter, age 12, will be Rey for Halloween. We've made a decent replica of her outfit and staff. I saw the cover of the DK(we've used DK for travel many times to give you a look at what you'll see) showing Rey's AT-AT home. It lays it out on 2 pages( and the book is a large book with ~200 pages, everything in color) all the many details about her home with trap doors, living space, 'garage' for her speeder, Y-wing salvaged computer and flight simulator, etc; including short write-ups about the details, e.g., she wove her sleeping hammock as a child. Also, on the Episode 7 chapter, there's a neat map of Jakku, that lays out the land and where Rey travels, Maz's castle, Resistance base, First Order Military, and Starkiller Base. The kiddoes are hoping for a Rey sequel soon.

Episode 2 goes into detail about those prolonged speeder chases, Outlander club, Jedi temple, romantic Naboo retreats, Kamino, Tipoca city, Tatooine and space ports, Geonosis(the ringed planet), droid factory and many more talking about the different battles and forces involved. Actually, flipping through this volume has clarified many things about these movies which I found more complicated than the earlier ones(Episodes 4-6).

Episode 3: Coruscant Battle(quite detailed), Jedi temple complex, Palatine's office, Utapau, Pau city, Kashyyyk(Think Wookies. It's making my head spin with all these names!), a Wookiee tree(kids like it), more battle fronts, Mustafar and the famous, and, I think, over drawn out, as far as the movie, (Episode 3 is not my favorite) duel scene, Polis Massa, and a medcenter.

Episode 4(my favorite episode): Tatooine map in detail, Lars homestead, Ben's house(neat place!), Mos Eisley(of course) and the Cantina(I can hear the music), Death Star cross section, and the Great Temple seen near the end off the movie(Hmm, never thought much about that).

Episode 5: a really nice expansive fold-out of Battle of Hoth and Echo base, Dagobah and Yoda's house, Cloud City.

Finally, there's a table of context and index, but just browsing will keep you and your children fascinated for hours. Just a brilliant work with creative, incredible drawings- food for the mind, fun for the heart.

J. Messinger
5.0 out of 5 stars All the details I love presented in rich and meaningful context
Reviewed in the United States on March 1, 2018
Verified Purchase
I've purchased several books in the "complete" series by this same publisher, and Star Wars Complete Locations has impressed me the most. The reason is because it not only are there all the little details and callouts I've come to love, but it presents them in a context that makes them more meaningful. For example, there are several large battle and city spreads, where it has all the usual detail (this house, this event, this creature, that character) but then it *also* shows you timelines, action sequences, and linked events... you can re-live how a scene unfolded from a new perspective. There's the path the speeder chase took through Coruscant, a dissection of the battle of the Gungans vs. the Trade Federation, and more. It's fantastic... buy this book!
Read more
9 people found this helpful
Helpful
Report abuse

SUP413
5.0 out of 5 stars Fascinating for Fanatics!
Reviewed in the United States on April 1, 2020
Verified Purchase
This text is teeming with information throughout the s Galaxy! As a diehard SW fan from the original trilogy to EU to Disney+, I'm delighted to see locations in new ways and learn even more details about every place our favorite characters visit over time.
The diagrams and captions offer a glimpse at so much more, and the explanations bridge the gaps between so many stories, from films to print to cartoon series.
I am still digesting this SW Bible, while I wait for each CW-S7 episode to be released weekly.
If you know a big fan, this would make an awesome gift!
Read more
2 people found this helpful
Helpful
Report abuse

boomersm
4.0 out of 5 stars Happy.
Reviewed in the United States on March 2, 2021
Verified Purchase
Nice book. As usual the books from DK are always very well done and enjoyable. The only reason why this didn’t get a 5 star review is because it doesn’t include anything from Last Jedi or Rise of Skywalker. Not a huge problem but it says “Complete Locations”, and that’s not quite true. Otherwise very happy with this book and makes a great addition to my DK collection. If you are a Star Wars fan this is a no brainer. Great.
Read more
One person found this helpful
Helpful
Report abuse
See all reviews

Marky Mark
4.0 out of 5 stars Good cross-sections of the Star Wars Univere up to Episode 7
Reviewed in Canada on February 11, 2020
Verified Purchase
I like the book as its an improvement over the first series. I just wish they had waited till they finished Episode 9 and had included Rogue 1 and Han Solo worlds into this. Maybe they will make a third edition and include these. Overall a really nice book - anyone who is a fan of the worlds and the settings will like this.
Read more
Report abuse