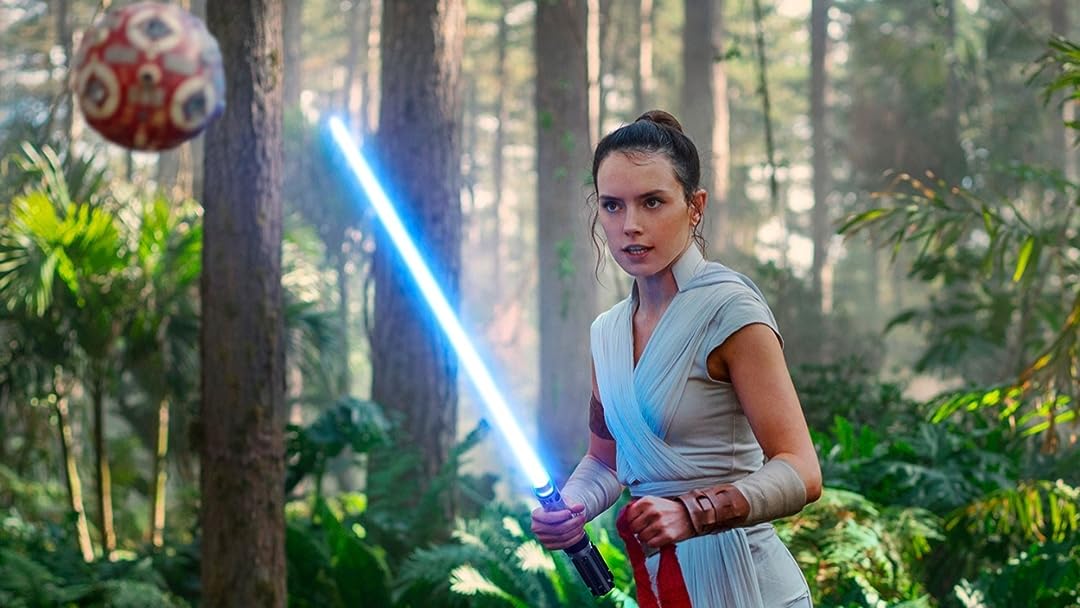 Star Wars: The Rise of Skywalker

(52,959)6.52 h 21 min2019X-RayNR
In STAR WARS: THE RISE OF SKYWALKER, the riveting conclusion of the landmark Skywalker saga, new legends will be born—and the final battle for freedom is yet to come. WARNING: SOME FLASHING-LIGHTS SCENES IN THIS FILM MAY AFFECT PHOTOSENSITIVE VIEWERS

Save with with the Star Wars movie collection on Prime Video shop now.

Benjamin K.Reviewed in the United States on December 29, 2019
5.0 out of 5 stars
A Great Movie, But There’s No Pleasing Some People
As I said in a previous review, Disney has succeeded where George Lucas failed when he made the prequels- they made Star Wars fun again, as well as relevant.

But there’s no pleasing everybody. Remember when some “fans” disliked The Force Awakens? It was because it was “too similar” to A New Hope. And remember when those same “fans” disliked The Last Jedi, because it was too different from Empire Strikes Back? Now those same people are mad AGAIN, because Rise Of Skywalker is too much like Return Of The Jedi!

OMG, it’s almost like the movies themselves are not what they dislike, but rather, they have an axe to grind with diversity, perceived political bias (as if George Lucas, noted progressive liberal, didn’t use the prequels to rail against George W. Bush, the Iraq War, and the fascistic leanings of W’s administration), or the fact that the main hero is a female.

Make no mistake, Rise Of Skywalker is a blast. Is it perfect? No. Is any Star Wars film perfect? Nope- with the possible exception of Empire- but they are fun. The only expectation I have when seeing a SW film is to be entertained, and ROS delivered.

As an aside, let me just say, if you are one of those “fans” who finds himself enraged at these new films, tweeting nasty things at the cast and raging on social media about how your favorite pet fan theory wasn’t addressed, or because there are too many women and people of color in the new films, or that Rey doesn’t smile enough, or that the prequels are, in fact, great movies and the new ones are awful, then I have news for you.

You don’t like Star Wars. You’re stuck on films from 40 years ago, and you can’t accept that times have changed. Maybe you prefer a time when your movie heroes all looked like you. Maybe you like the old films because of the nostalgia they fill you with for a time that seems simpler in your memory than it really was.

Someone once said, “Let the past die- kill it, if you have to.” Wise words, whatever the source.

Maybe you dislike how Disney recycles plot points from the previous films and you just prefer the daring and original ideas behind Star Wars legends books, where they cloned Palpatine and Luke became a Sith Lord until he was redeemed by his son, Ben Skywalker. Oh wait- Star Wars has been recycling plots for decades, almost as if it was inspired by the cyclical myths explained by Joseph Campbell in his book, “The Hero’s Journey.”

At any rate, you are now free to move on to another piece of intellectual property to “love”. How about Star Trek? It’s not like Star Trek embraces gender and ethnic diversity while championing a utopian future where everyone is valued equally... oh, wait. Guess you’re outta luck.

Anyway, to everyone else- Star Wars: Rise of Skywalker is a lot of fun, and a fitting conclusion to the new trilogy and the Skywalker Saga as a whole. I can’t wait to see what in store for the next movie!

Anthony HernandezReviewed in the United States on December 24, 2019
1.0 out of 5 stars
So many issues with this movie
I won't post any spoilers but it seemed for the most part wherever the writers were for this movie knew very little about Star Wars. It will make money because it is Star Wars, but I have two questions.

(2) Will you even look forward to watching any of the new trilogy after you have watched them once, maybe twice?
Much like the prequels I have seen them and that is enough, so no replay value there.
481 people found this helpful

CytaniumReviewed in the United States on March 17, 2020
1.0 out of 5 stars
It's that bad.
Verified purchase
I heard this movie had problems but this was much worse than I could have imagined. Nothing is earned, nothing makes sense. There's so much exposition it's unbearable. It's like a glossy, disorganized fan film. J.J. Abrams and Kathleen Kennedy absolutely failed.
350 people found this helpful

LukeReviewed in the United States on March 17, 2020
1.0 out of 5 stars
10/10 Will break your heart &lt;/3
Verified purchase
*Spoilers* So if force ghosts can pull xwings out of the real world, then the Jedi and the Sith would be in a deathmatch for eternity right? You guys broke my heart with this movie, not a single one of the last three has been better than 1-6, and this was the finale, like it has to be good, it has to follow Star Wars lore, but instead we got flashy, rushed/trash acting, and a crap story. My soul is heavy with the weight of disappointment...
277 people found this helpful

tracie coulsonReviewed in the United States on March 18, 2020
1.0 out of 5 stars
I miss george Lucas
Verified purchase
Disney has cheapened the star wars saga so bad that it isn’t even recognizable anymore. It’s just ignorance! What a rip off.
242 people found this helpful

jwwReviewed in the United States on December 21, 2019
4.0 out of 5 stars
Lots of problems, but I still had a blast
Had a little trouble deciding on the rating for this. The left side of my brain is frustrated with the many plot and structuring issues, but the right side of my brain was absolutely entertained by this.

The movie has maintained the current and original trilogy's legacy of being the definition of a popcorn film. The action is great. The movie looks fantastic, really the most visually impressive of all the Star Wars films.

The cast and characters are again great. I'm glad to see the trio of Finn (John Boyega), Rey (Daisy Ridley), and Poe Dameron (Oscar Isaacs) all together for a substantial stretch of time. The interactions between the three are great. (They could've had more time together.) I also liked the new characters with the exception of the Knights of Ren who despite being first teased in Force Awakens, just don't do enough.

The humor works well. However, I felt even though C-3PO (Anthony Daniels) has been comic relief since the beginning, he was too aggressively jokey. I liked that this continued the last film's theme of hope.

Now for the problems. These three films changed creative control from JJ Abrams to Rian Johnson and back to Abrams without the Disney brass doing enough to pre-plan or control consistency. Abrams did a lot of things I found so maddening that I'm shocked that the producers greenlit them. The major threat in this movie introduced so quickly and with such little plausibility. Reveals and plot elements pop up so arbitrarily that they don't feel natural at all. It's a little like poor fan fiction. Abrams jams way too much story in here in order to arrive at the conclusion he wants. I felt Finn just wasn't given enough room to breathe and was disappointed with how his story ended.

The whole change in directorial voice is exacerbated by the fact that Abrams like Johnson before him is actively resistant in running with what he is given. Abrams does something that is a major slap in the face to his predecessor, which is so mishandled in its execution. It takes you out of the film. Say what you will about the Canto Blight subplot in The Last Jedi, but I liked the character of Rose Tico (Kelly Marie Tran). I didn't like that they cut her role so short in this not to mention completely axed her set up from the last film as a romantic interest for one of the characters. It's like Abrams decided he didn't like her because he didn't create her and she wasn't in his plans.

J.J. still has his Achilles heel of being too blatantly nostalgic. It isn't half as prevalent as in the Force Awakens, but there are a couple moments where it raises its head and is downright insulting to the audience.

I know I talked way more about the cons and the pros, but it's easier to talk about what doesn't work than what does. When it works, the movie pulled me in and would make forget the problem areas when they weren't around. It still embodies the essence of a Star Wars film. I'd rank this as the weakest of the trilogy but better than Solo and the prequel trilogy. This is one of those films where your opinion could really go either way. I've found both negative and positive criticism of this to be accurate. If you're already uber angry at the first two movies and didn't think or were unsure if you wanted to continue, then you really might not want this. However, if you enjoyed the ride so far, I suggest you take the gamble.
182 people found this helpful

Emily07Reviewed in the United States on March 22, 2020
1.0 out of 5 stars
Dark and depressing
Verified purchase
Wow. Where to start. First, I heard that George Lucas had offered to consult for Disney after he sold them the Star Wars Franchise. They pretty much blew him off. Big mistake on their part.

It feels like Disney viewed this as a cash cow, and didn't bother with a good story, good writing or any significant effort at scenery. Especially in this last movie in the last trilogy. When in doubt, throw in a fight scene, even when it's not called for or needed. The acting was horrible in this movie, the secondary characters barely touched on and the primary characters having no cohesion or connections as people fighting for a very important cause. George Lucas has the vision. Disney really really does not. Shame on them for such a shoddy job.

The only good acting were from the old timers that were killed off or died. Specifically Harrison Ford, Carrie Fisher and Mark Hamill. The new actor that did a good job was Adam Driver as Ben/Kylo Ren. The movie was disjointed and so very dark and depressing that even when they won at the end, I found that I didn't really like the characters that were left, and found myself very unsatisfied and again depressed. Not a movie I will bother to see twice.
120 people found this helpful
See all reviews
Back to top
Get to Know Us
Make Money with Us
Amazon Payment Products
Let Us Help You
EnglishChoose a language for shopping. United StatesChoose a country/region for shopping.
© 1996-2021, Amazon.com, Inc. or its affiliates