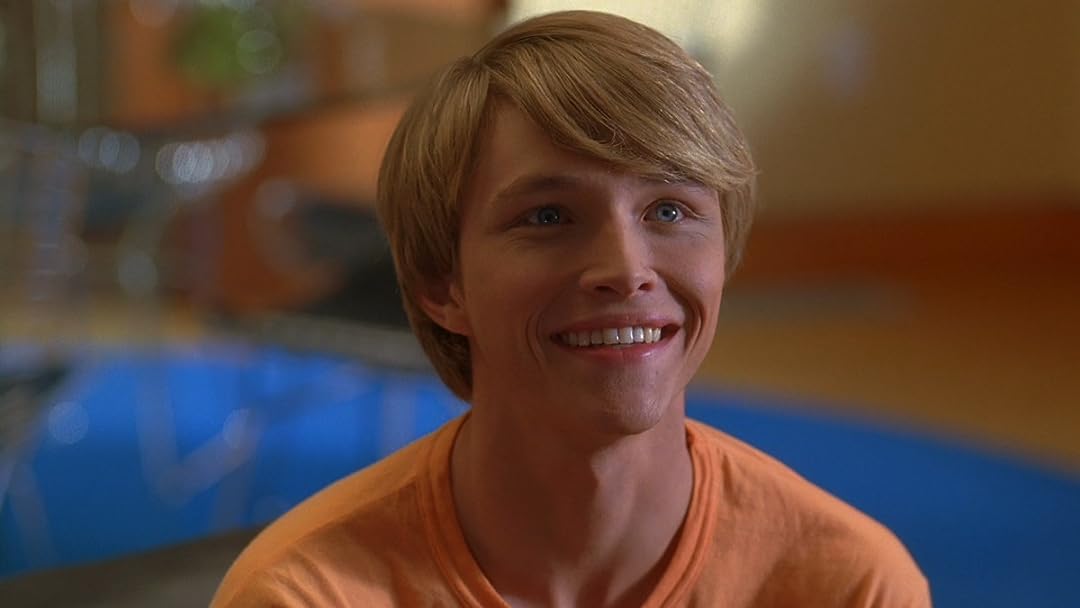 Yvette V.Reviewed in the United States on July 13, 2021
5.0 out of 5 stars
Common Plot BUT GREAT! 😁
Verified purchase
StarStruck is your typical plot of romance. In this case it’s (Christopher) big celebrity falling for (Jessica) who has a regular day to day life. The movie seems to be geared toward a young-teen audience. For parents: nothing inappropriate at all other than some quick beach takes since movie takes place in Hollywood. Summary: Jessica (living a day to day life) helps Christopher (celebrity) find his true self and confronts him about living a “fake life.” Jessica tells Christopher how he is a brat wanting to be waited on. She has him discover his true self and not go with what others want or whom they want him to be. Christopher realizes he doesn’t have to make his career turn him into a fake self-centered person; he has to do what he really wants. Jessica and Christopher fall for each other and he realizes he makes a mistake letting Jessica go and denying he ever met someone like her (an average person). All of this story unfolds when Jessica is drawn in by her sister’s obsession for Christopher. Overall, great cheesy movie! Actors do a good job and this is movie makes for a family night flick. Movie does have some singing for those who want to know. It’s no musical of course but singing does have a significant role in the movie.

margieReviewed in the United States on May 22, 2012
5.0 out of 5 stars
addlines views
Verified purchase
I enjoyed this movie very much as it's family oriented, funny, and deals with relationship building with teenagers (young adults). The movie plays out in Hollywood, California area, the tour of the senic places which included the beach was great as some viewers may never get to see it in person was a plus.

It shows not everyone will overlook rudeness and superficial friendliness to let you be their close friend. Sometimes it takes superstar action of young people to find the acceptance of others, in a truthful loving and caring special way. Someone has to be strong enough to call you on your actions towards them and others. One can't buy true friends with money and gifts, how shallow that is - but it does reflect on what kind of person you choose to be.

This movie shows families in different lights. Grandparents are in an inter-racial relationship. Parents are dealing with teen dynamics of sibbling warfare that goes to the extreme between daughters likes, issues, and solutions of each.

Do each of the girls eventually gets their wishes fulfilled? Does the oldest get to meet her star and adore him like a true fan? Does the younger daughter find a true friend and does her wish get fulfill, too? Does the Star find a loving working relationship with his parents, agents, fans, friends? Does he accept his parents actions managing his career or how does he chose to handle it? Is there a better way to attack his career issues to reach a happier, calmer place that will give him some space to grow as a person?

Are your parents necessary to help you stay safe and grounded in a high stress career? However, they too can lose site of the direction of a childs career which seems to have happen with these parents. Does it work out for everyone in a healthier and happier relationships? WOW...yes I would say this movie (DVD) has a lot to say about relationships.

Maybe this movie could be used in classroom discussion groups or -?- to help young people to build relationships and or loving friendships? Just a thought kids, parents, grandparent, and teachers!!!

This family Movies has a strong story with great crazy moments that even real families on vacations have but stays true to family time, respectful children of their adults, clean speach, no nudity, obey parents rules, and have crazy fun but not to destructive of others possesson (except Grandma car..LOL!!!)

Frank C. BranchiniReviewed in the United States on April 6, 2005
5.0 out of 5 stars
An Australian Delight!
Verified purchase
I would love to see a widescreen version of Starstruck. I would love to see a better quality DVD. And I would love to see a Starstruck soundtrack. But I am thrilled to find even a not so great quality DVD of this movie which I love. Starstruck was a delight when it was released in 1982 and twenty-three years later it is still as charming. A lot of the charm of the movie comes from the performances of Jo Kennedy as Jackie and Ross O'Donovan as Angus. Their onscreen releationship is a true joy to watch and they come across as very likable. You want to them to continue to support each other and you want them to achieve their goals. The music is enjoyable. The staging and choreography are marvelous. Particularly outstanding is the water ballet at the rooftop pool. Yes, the DVD was clearly put together on the cheap, but ignore the technical details and enjoy the show.
One person found this helpful

H. BalaReviewed in the United States on November 9, 2010
4.0 out of 5 stars
"You killed Petunia!"
Verified purchase
STARSTRUCK tells a tale as old as time, song as old as rhyme, and all that jazz. It's a Disney flick that should charm its pre-teen viewers with its dose of wholesome. The two young leads - Sterling Knight and Danielle Campbell - carry the load. It's a cinch that the target audience will forgive the cliches peppering this tale of a pop star teen idol struggling for a measure of normalcy in his crazy Hollywood life. Parents ought not to have problems with their kids parking themselves on the couch to watch this film. I've seen worse teen flicks, and STARSTRUCK is actually better than most.

A level-headed teen from Michigan, Jessica Olson (Danielle Campbell) has to visit her grandma in Los Angeles, but she's not at all enamored with the holiday trip. Not as gaga, anyway, as her older sister, what's her face, who proclaims herself the number one fan of teen pop sensation Christopher Wilde (Sterling Knight). But it's Jessica who accidentally bumps into Christopher Wilde, and it's Jessica whom Christopher hangs out with for an evening and a day, as they dodge paparazzis, see the sights, all along squabbling and sniping and inevitably falling for each other. See? Tale as old as whatever...

It takes a lot to impress Jessica, and Christopher's celebrity status and whining about the paparazzis only maker her roll her eyes. But Christopher is a pretty good dude and flashes those blue eyes, and Jessica isn't a robot. But reality steps in, or reality as it is in Hollywood, anyway, and it drives these two apart. Will Christopher, who is so not in control of his life that he can't ever say no to anyone, let a good thing slip away? Jessica just wants him to be honest. It kills her that Christopher is so mired in his larger-than-life existence, so oblivious about the things that really matter. Christopher thinks he's protecting her from the media, plus there's this notion that his being seen hanging out with an ordinary girl would ruin his chances at a movie deal. Both Jessica and Christopher kind of have a point (that is, regarding Christopher's trying to protect Jessica's privacy; the not wanting to be seen with her because of the movie thing is kind of a jerk move). But this is a Disney movie, where sad endings don't exist unless you're a dog with rabies. The story's climax allows our pining protagonists to make up in glorious Disney fashion, and it takes place in a *gasp* high school dance. I know, right? This has absolutely never been done before.

There's a chance that Danielle Campbell may have been just a tad too cranky, but I don't think her witchiness will turn off the audience. She and Knight have a spark together, and this really is what makes this movie so watchable. The songs are whatever, although Sterling does deliver that terrific acoustical performance by the pool at the party. Brandon Mychal Smith, Knight's SONNY WITH A CHANCE co-star, provides some chuckles and dude even raps some and his flow is tight. I'm swayed to rate this film 3.5 out of 5 stars.

This is the Extended Edition and here's the bonus material that's relevant to the film: the exclusive extended music scene - featuring the song "Got to Believe"; 3 music videos: Sterling Knight's "StarStruck", Anna Margaret's "Something About the Sunshine"; Stubby's "Party Up"; and "Rock Along" - an option on the DVD which allows you to sing along as the song lyrics pop up karaoke-style during the film's musical performances.
16 people found this helpful

Bob FarrellReviewed in the United States on March 15, 2020
5.0 out of 5 stars
I'm Struck by the simple story
Verified purchase
There's just something about this movie that struck a cord with me. A simple, but heartfelt love story. A not get devoured by Hollywood madness story. Not bad music. A simple, family friendly movie.
2 people found this helpful

azgirl149Reviewed in the United States on September 19, 2012
5.0 out of 5 stars
Opposites attract even in Disney movies
Verified purchase
This was a movie I watched over and over for the songs and was glad to get the soundtrack included with the movie. I was a bit bummed that the soundtrack wasn't as good as the movie. Several songs deviated from the sound of the original version but some were the same so it balanced out. The two stars falling in love while not even sure if they like each other as people was a good idea. She hates him because she doesn't know him and thinks he is just another self-obsessed young star. He tries his best to win her over with his charm and looks only to find out that is not enough for her, in fact, she is not even impressed by his charm, title or fame. She is so set against liking him that she finds if she removes the false front there lies an honest-to-goodness great guy.
One person found this helpful

GeorgeReviewed in the United States on December 2, 2021
5.0 out of 5 stars
Nice
Verified purchase
This was an excellent movie. I didn't know quite what to expect, but yeah. Really good. High quality. Funny. Teaches maturity. No foul language. Refreshing.

Jordan MartinezReviewed in the United States on May 23, 2020
5.0 out of 5 stars
Great movie!! 👍🏼
Verified purchase
One of my favorite movies. It’s sort of a throwback, but I will forever love it! Favorite scene is when Christopher Wilde brought Jessica to his house and he sang while she was in his bedroom “hiding”. It’s all great though!!
See all reviews
Back to top
Get to Know Us
Make Money with Us
Amazon Payment Products
Let Us Help You
EnglishChoose a language for shopping. United StatesChoose a country/region for shopping.
© 1996-2022, Amazon.com, Inc. or its affiliates