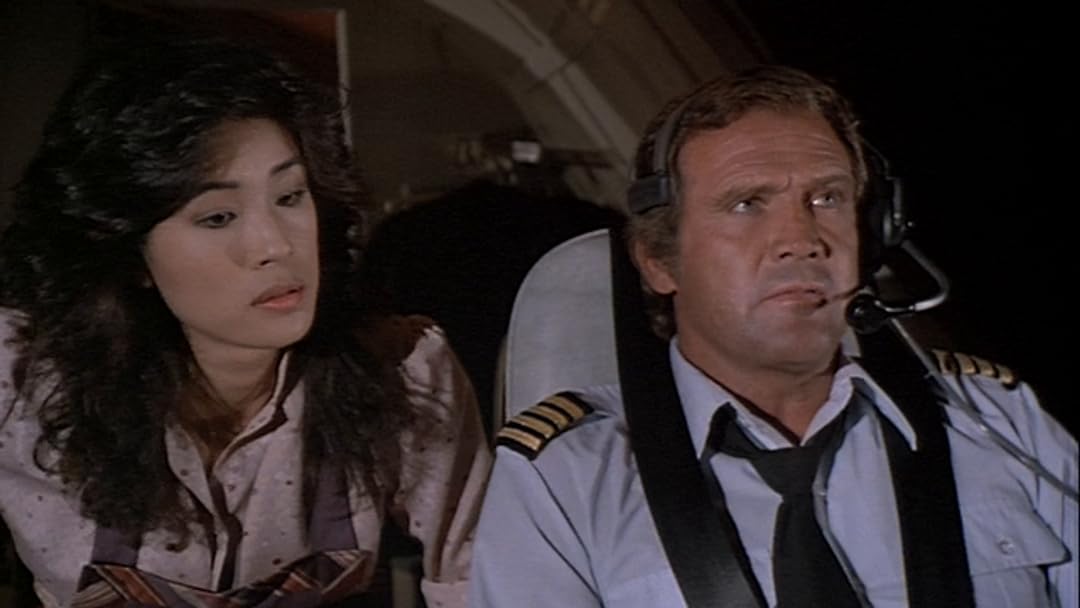 (127)4.81 h 54 min19837+
In this taut, futuristic drama, the maiden voyage of a hypersonic passenger jet becomes a disaster when something goes terribly wrong and it gets stuck in orbit.

Melinda D. WiselkaReviewed in the United States on October 19, 2020
3.0 out of 5 stars
A Great Movie with One Major Flaw
Verified purchase
This is an 80s movie. Of course the special effects are subpar.

They were doing the best they could with a Trash 80 computer. Try living in that time, kid with head glued to an iPhone. You will never know the existential horror of having your finger trapped in the dialer of a rotary phone.

That said, the movie was pretty suspenseful from the moment disaster struck (we saw that coming several thousand miles away, didn't we, audience?), when a rocket entrepreneur wrecks the maiden flight he's on (inevitably leading to his own demise). Spoiler, sorry. The movie doesn't let up until the very last minute. The whole time I kept thinking they should redo this movie. I mean, it's got a lot going for it. There's just one major problem.

Anyone want to guess what that is? Mind you, this movie was released in 1983. Three years before Challenger was destroyed by the same greedy disregard for safety that was displayed by the owners of Starflight One at the beginning of this movie. The public weren't aware of just how limited space-shuttle flight actually was so no one in the 1983 audience probably batted a heavily shadowed eye when they saw the Columbia (God rest her sweet soul!) return to the orbit-locked Starflight One not once but three times in 24 hours! The engineer was attempting to get Columbia to return a fourth time, but that proved impossible because she was still in the midst of her third rescue operation.

In reality, each relaunch of Columbia would have taken weeks if not months to ensure she was flight-worthy. Every reentry into the atmosphere would have required a dry-dock overhaul, so to speak, to inspect the ship for damage. You will remember that Columbia was destroyed in 2003 because of a heat-shield failure due to damage suffered during takeoff. Her launch had been delayed 18 times prior to that accident, indicating the real problem with the NASA shuttle system in general and in particular. They weren't reliable. And planes needed to be to be commercially feasible.

Columbia and her brave crew were the real heroes of Starflight One. But today's audiences are too sophisticated to buy into all the NASA hype about their airplane service to the stars, because they know how vastly oversold it was to the public. The very thing that nearly destroyed Starflight One (the intense heat of atmospheric reentry) doomed Columbia herself.

I definitely recommend checking this movie out. As far as disaster films go, it's good stuff. Just don't try making any sense of the relationship drama. By the end, I still didn't have a clue who Lee Majors was married to. Was he having an affair on his second wife with his first wife? Is that an okay-to-cheat because I've been-there-done-that scenario? Who was the little girl's father? If she was Lee Majors' daughter, why weren't there any scenes with him tearfully kissing her goodbye?
4 people found this helpful

Jim R.Reviewed in the United States on July 14, 2020
4.0 out of 5 stars
Sure it has flaws, but the tension in this movie is still gripping, 'Will they live or die'!
Verified purchase
I watched this movie when it first came out, and remembered it as a mix of bad effects, ('weightlessness?' inaccurate orbital maneuvers, etc.) and such, but the threat and tension of the premise was still strong. What could result if a high flying 'airplane' were to actually enter orbit? One thing I noticed in it that I think has been missed in the 'trivia' list of this movie is 'where does the liquid hydrogen to refuel the plane come from?'. If I'm correct, the only engines on the space shuttle that use liquid hydrogen are it's main engines, which are fueled by the external tank. When that is jettisoned there is no more liquid hydrogen fuel. To refuel the Starflight 1 craft with liquid hydrogen they would have to carry that fuel in the shuttle's cargo bay, yet during the refueling scene it shows the shuttle with it's cargo bay doors wide open and it's completely empty! Where is it supposedly stored? There is no (as to my knowledge) liquid hydrogen storage on the shuttle itself, as it's OMS (Orbital Maneuvering System) engines use different fuels. Regardless of these flaws I enjoyed it, when I first watched it when it came out, and again just now.
One person found this helpful

TestingGuy007Reviewed in the United States on May 9, 2020
1.0 out of 5 stars
Disaster of a Disaster Movie.
Verified purchase
As others have said, this movie is supernaturally awful. I quit about halfway through. I've seen technically and scientifically flawed movies and could still sit through them, but not this turkey. As an engineer it was too painful to watch. There were so many technical absurdities i wonder if it was written by six-year-olds. Dumb six-year-olds. Now I quite enjoy a really bad, low-budget B sci-fi movie when they're so bad they're good. This one was trying to be good...and failed spectacularly. My one star rating should have been a negative one star. Wish I could get back the hour wasted.
2 people found this helpful

retrobabeReviewed in the United States on November 14, 2020
3.0 out of 5 stars
Typical B sci-fi movie, but fun
Verified purchase
This movie will definitely not find itself occupying a space on The World's Greatest Movies list, but for what it's worth, it wasn't THAT bad. It's a B movie, so it has lots of cheesy acting, overly dramatic music, cheap special effects, and a lot of technical oddities. I mean we are talking major stretches with the back n' forth space shuttle runs, cramming people into hydro boosters, etc.
But, if you are looking for a dumb movie that you can watch if you have time to kill one rainy afternoon someday, or if you have nagging insomnia, this is an ok movie. They tried to sell this movie by having Lee Majors and Lauren Hutton in it, but I think Majors and Hutton might have needed to star in this silly movie to make extra money for Christmas that year because again, it's not the greatest movie.
As with all B sci-fi movies, you can either appreciate this movie, or absolutely hate it. I would watch this again, but let's just say that I am in no rush to buy the DVD or Blu-Ray.

GadgeteerReviewed in the United States on September 10, 2020
1.0 out of 5 stars
The Biggest Disaster Was the Movie
Verified purchase
I tried to like it, I really did. I can look beyond low budgets and cheesy sets if there's a good story and good acting involved. The story was so-so at best and the acting... well, let's just say I found "Waiting for Lefty" far more compelling. If I had to guess, I'd wager that the movie was sponsored by Valium with copious samples doled out freely to the cast and crew. The most exciting part was the sound of the truck backfiring in the second scene. It did have Lee Majors in it but judging from his enthusiasm level, someone must have blackmailed him into taking the role. The movie was directed by Henry WInkler (aka "The Fonz") but I notice that even he doesn't include it in his long list of credits and accomplishments. I hate to write a review with nothing at all good to say for the movie so here you go-- it's a great cure for insomnia. It's a shame that apparently the actors thought so too.

J.W.Reviewed in the United States on April 9, 2015
3.0 out of 5 stars
I liked it even though the drama was corny at times.
Verified purchase
Personally, I liked this movie. It had the feel of the old movies like "Poseidon Adventure". Mainly because this movie is fairly old. Lee Majors in a post "Six Million Dollar Man" role stars as the captain of a new jet that is the 1st hypersonic commercial jet. Of course, the guy who invented the plane has just found a defect that if a highly improbable event happens it could cause the jet to reach escape velocity and go into orbit. So of course, the jet ends up in orbit with no way to re-enter the atmosphere because it doesn't have a heat shield plus they're running out of oxygen. There are also secondary stories to keep up the drama.

One unintentional funny characteristic of escaping gravity in this movie is it seems only to have temporary weightlessness. Things float around the cabin for a minute and they string a rope to help movement around the cabin. Then the affects of gravity is really hit and miss. Things and people float sometimes and not others.
One person found this helpful

KivellReviewed in the United States on January 29, 2021
3.0 out of 5 stars
Not a bad disaster mere movie for the day
Verified purchase
I know we see some of these things in laugh now. It's not a bad disaster movie for the time. But somethings bug me like When they take off there still have wheels on the ground and they say ready to roll ship then they say they rolled ship but you can't roll a ship on the ground but all rockets roll when they get to altitude BUT NOT On Runway and
I want to know why they are using a Oscilloscope to watch the the ship from mission control

Ed EReviewed in the United States on June 30, 2016
4.0 out of 5 stars
Far-fetched but entertaining nonetheless.
Verified purchase
I thought this was a very enjoyable film, devoid of nudity, profanity, and guns. Admittedly this has a far-fetched story line with highly improbable problems and even more highly contrived solutions. This movie does require a suspension of one's critical thought processes, but once that is achieved it can be entertaining, which is the primary goal of any movie. Considering the time when it was released ('83) I am surprised that there was no one smoking in this movie, at least none that I recall.

Considering the 95+% of trash movies that are available here, it was good to stumble across a movie that I didn't have to be constantly adjusting the volume and could just lay back and enjoy.
One person found this helpful
See all reviews
Back to top
Get to Know Us
Make Money with Us
Amazon Payment Products
Let Us Help You
EnglishChoose a language for shopping. United StatesChoose a country/region for shopping.
© 1996-2021, Amazon.com, Inc. or its affiliates