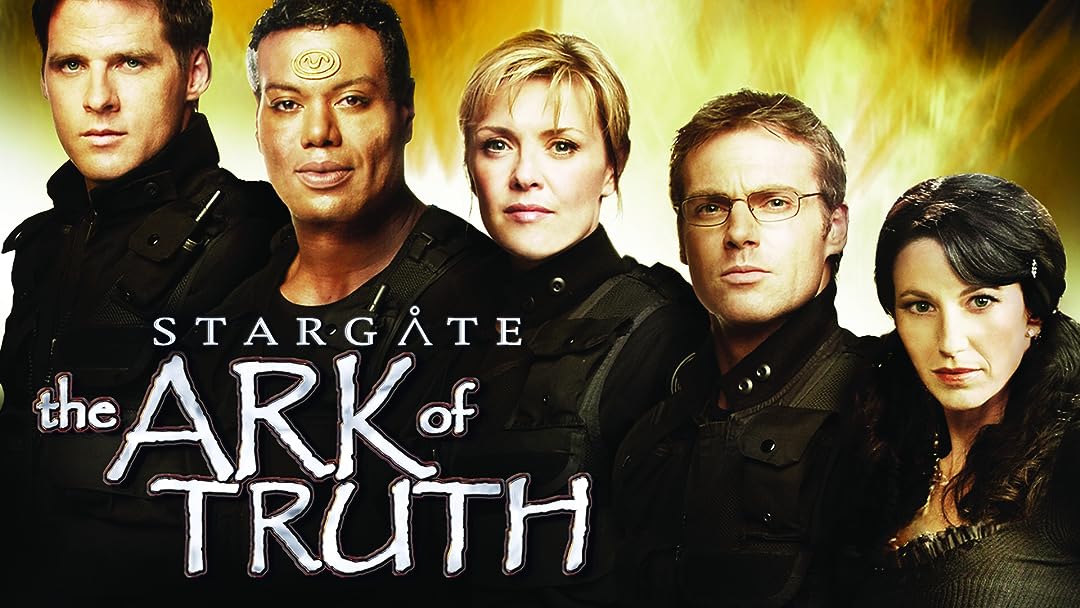 Stargate: The Ark of Truth

(3,695)7.41 h 41 min2008X-Ray13+
An ancient artifact known as the "Ark" will play a key role in the ongoing fight between good and evil, and SG-1 is on the hunt for it. When the SG-1 crew discovers that a final assault on Earth is in the works and a double-agent is scheming among them, their mission takes on a new and urgent meaning as they travel to the Wraith's home turf to overtake their arch enemy before it's too late.

T HoffmannReviewed in the United States on January 7, 2019
2.0 out of 5 stars
Thin plot; replicators were unnecessary and irrelevant filler
Verified purchase
In a non-SG-1 movie, when there is not enough of a plot to fill the allotted time, you get one or more chase scenes. In an SG-1 movie, you get replicators. They were totally unnecessary and irrelevant, added nothing to the main plot and were included only to fill the allotted time. The story with just the Ori was insufficient for a movie … should have been a 45 minute TV show.
11 people found this helpful

AbdelReviewed in the United States on February 9, 2018
5.0 out of 5 stars
A Must Watch If You've Seen SG1
Verified purchase
I'm glad they actually ended it this way, wrapping everything up very nicely. The storyline was actually more engaging than any Hollywood movie I've seen in recent years, but that's probably because it could focus on the story as we already know the characters and general background.

The pacing was just fantastic, as were the performances and effects. The only downside is you'd have to see the last couple seasons of SG-1 to follow. Which you should.

SReviewed in the United States on June 13, 2020
5.0 out of 5 stars
Great film after you watch the series.
Verified purchase
It tied up the last of the SG-1 series. I am still working my way through the franchise, but it's such a fun wild ride. And I wish there were so much more episodes. It would be awesome if it continued on somehow, but I don't know if it'd have the same campiness as I did back then.

This is a fun series. Please start from the beginning if you haven't seen SG1. Do not watch this film if you haven't seen SG1. Actually, you need to start from the very beginning and there's a different movie altogether. So Google the list of which movies and shows you need to watch first so you can get to this one. And you will enjoy it so much better.

RobReviewed in the United States on September 30, 2019
4.0 out of 5 stars
4 stars long because Atlantis was not a corner stone.
Verified purchase
Watched All sg1 episodes.. Felt like finishing a legit marathon. Got into Atlantis, finished tonight Atlantis tonight (GREAT ending, unlike sg1 silly time distillation) and decided to watch this "movie", but more just a long episode (w/o O'Neil) . This went straight to DVD, because the writers SUCK. There was no catch up, there was no recap, just straight into a new "episode". Could have been an epic 3 hour movie, but it fizzled, with no deaths, no memorable moments. Sad end to a GREAT Series. Reminds me of the entourage movie.. Just another episode, rather than an epic recap, followed by a great story line, that ended as soon as it began.
3 people found this helpful

ReneReviewed in the United States on September 20, 2021
1.0 out of 5 stars
Would have been okay without...
Verified purchase
...Claudia Black (I think that's her name). OMG I couldn't get past the first 10 min with her acting or rather OVER acting. I know the director is at fault also, but Claudio is so, so obnoxious. I fast forwarded to get past her, but she is just in it too much and whenever she is on screen it is like nails on a chalkboard. I understand why I haven't seen her in anything else. I loved the original Stargate shows; she was not in them. Truth be told, i didn't care much for the star (Cameron), but not nearly as much as Claudia. Way to ruin a great series! I finally gave up; the Ori story line was always crap anyway.

DWReviewed in the United States on March 2, 2016
5.0 out of 5 stars
If you love Stargate, watch it!
Verified purchase
So listen - I love me some Stargate. I saw the film in theaters when it came out, and was instantly in love with the concept. I watched 10 seasons of SG-1, 5 seasons of Atlantis, and was sad when they canceled Universe.

So every year, SG-1 always wrapped up their main plotline... because they always figured they'd be canceled. And every year they were pleasantly surprised when they weren't canceled.

When they were finally actually canceled, they weren't expecting it. So they made two movies to tie up the plotlines that Season 11 would have wrapped up. Ark of Truth is the better of the two.
12 people found this helpful

Connorm2CHReviewed in the United States on March 20, 2020
3.0 out of 5 stars
Fun watch but inconsistent
Verified purchase
Right so I did love the movie but one major issue here. First of all, the ori ability disrupter isn't a perm fix. They can overcome it eventually. The ori on base at stargate command easily could of gotten his powers back in time. Second, the Asgard shields lasted WAY too long. The same ori ships attacking the ship would take out its shields in no time, but it took ages for their shield to fail. They had the opportunity to take on the replicators while they were getting ganged up on by 4 ships got what I imagine a long time. On top of that, when their shields did fail, their haul integrity was outrageously durable too.

Another thing, morgan le fe, one moment she is stopped from telling SG-1 the location of the anti ori weapon, soon after before you know it, she is healing people and telling them all they need to know. I am pretty sure just because she was exiled doesn't mean she can intervene all she wants. The ori couldn't even, thats why they had to be sneaky and use humans to do their bidding.

Its also pretty sad I have to watch a movie to actually see the ending of the last season. If I had never watched stargate, oh boy would I be confused. Even if I watched the original film I would still be confused.

I really enjoy Stargate SG-1, and enjoy all of it, including this film. My only two issues...

1. The score is excessive. I get it. It's a movie. It's going to get a movie score. But after 10 seasons of the television show without one, you'd think they could have made an exception. It's always in the background. It's constant. It actually is distracting.

2. The replicator story arc is also extremely excessive. It's unnecessary. The story of the Ori was perfectly sufficient. The story arc with the replicators leads me to believe that the writers were unable to come up with enough on the Ori side to actually make a full length feature film. If that's the case, they shouldn't have made it. Not only does it feel cheap, but it feels poorly done.

Nonetheless... It's still a fun way to kill some time. And for SG-1 fans, still worth the watch.
4 people found this helpful
See all reviews
Back to top
Get to Know Us
Make Money with Us
Amazon Payment Products
Let Us Help You
EnglishChoose a language for shopping. United StatesChoose a country/region for shopping.
© 1996-2021, Amazon.com, Inc. or its affiliates