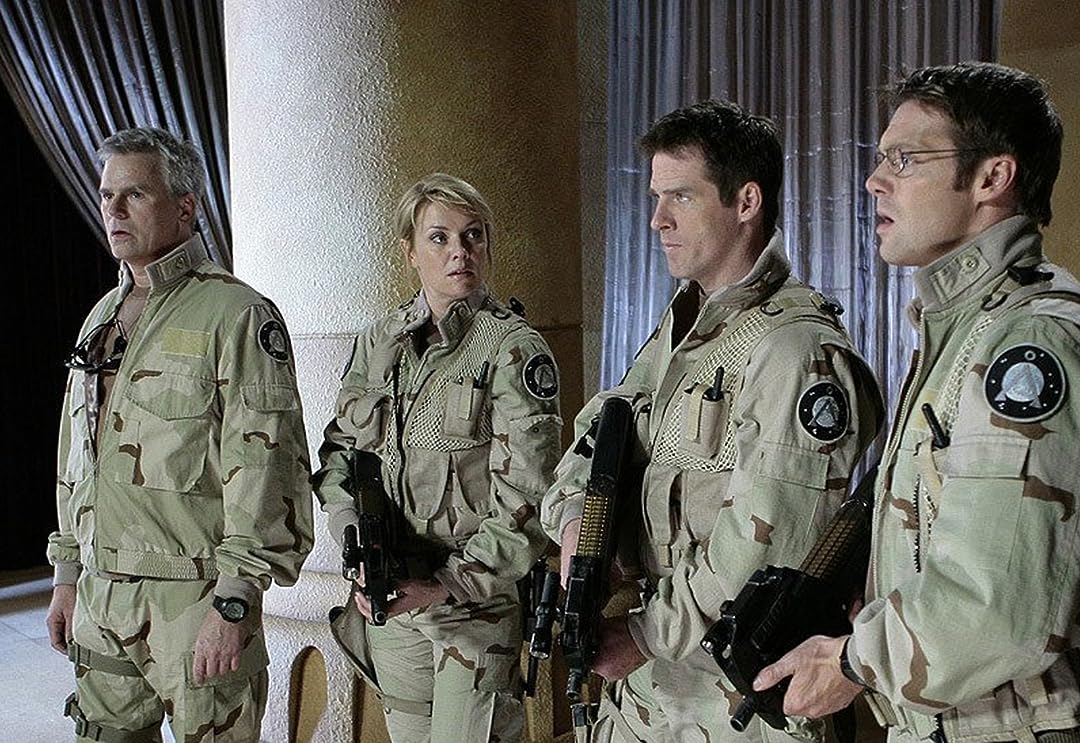 (2,899)
7.51 h 38 min2008X-Ray13+
Baal manages to cause a rift in time where the Stargate program never occurs and the team must travel back in time to restore their timeline.

Amazon CustomerReviewed in the United States on December 22, 2020
5.0 out of 5 stars
And so it ends ...
Verified purchase
Just watched all 10 years of SG-1 and the two movies - and now it's done.

It was such a joy to watch something not polluted by "Diversity" in all it's Political Correctness.

I've done this at least 4 times now, watching all 10 years of SG-1 and the two movies but - in a few days it's going to leave Prime and ... while paying $4 to watch each of the movies was doable ... the cost of paying to watch the whole series is usually prohibitive. So - this may be the last time I'll ever be able to do this - and that is a sad day. I suppose if I really get to miss it - I could buy the DVD's. We'll just have to see.

Sadly - Atlantis just did not measure up to SG-1 and Universe was just the kind of Diversity Abomination I was so happy this wasn't.

I really liked how they brought so many of the past actors and characters from the 10 year run. That was truly wel

Lloyd LofthouseReviewed in the United States on March 18, 2018
5.0 out of 5 stars
Finally, a conclusion we can live with but what about Stargate Universe
Verified purchase
Finally, an almost satisfactory conclusion to a series that was canceled after 10 seasons, but was continued in Stargate Universe only to be cut off without a conclusion during that spinoff's second season. I want a feature length film similar to Stargate Continuum to complete Stargate Universe.
30 people found this helpful

Okemos56Reviewed in the United States on February 25, 2019
3.0 out of 5 stars
Depends on whether you watch the show
Verified purchase
How much you like this depends on whether you watch the show. I've only seen the very first movie and a few sporadic episodes. I found them enjoyable because of the banter, and that's why I watched this movie when it came on Amazon Prime for free. It's a typical bad guy travels through time and changes history in his favor when on the verge of total defeat; heroes have to reestablish the time line in which they win.
The banter of the show is here, but much of it falls flat because I don't know enough. There's a lot of other "inside" jokes that pass me right by, although I can sort of guess I should be laughing or winking or something. The result is that it moves too slow for me.
As far as the overall quality of the movie, it has TV production values. Not bad TV production values, but still typical TV values. Script is passable. Many scenes not really believable but who cares if you like the characters? A pass unless you love show; in which case, it's probably 5 star.
7 people found this helpful

Bhatta's ReviewsReviewed in the United States on January 15, 2019
5.0 out of 5 stars
Enjoyable Science Fiction!
Verified purchase
For [[ASIN:B07KLT2Z68 Stargate SG-1]] lover like me this movie will fit right in. Make some popcorn's, bring all family members, Turn-on the Surround sound system sit back and enjoy the show! This is the second sequel to television series Stargate SG-1 following [[ASIN:B07JZXPRB6 The Ark of Truth]]. The movie is a time-travel adventure in which Ba'al travels back to 1939 to create an alternate timeline in which Earth never establishes their Stargate Program, and attempts to take control of the Goa'uld Empire. The movie streamed nicely & the Video & Audio quality was excellent!

bruceReviewed in the United States on October 15, 2020
5.0 out of 5 stars
Brilliant but be familiar with the Stargate series.
Verified purchase
Being a genuine fan of the series I'm most likely biased. Having said that, I truly believe this film is an excellent view. The familiar cast delivers an outstanding performance. I did read a previous comment calling it T.V. quality. I must disagree. I have not seen any productions that go to the length of filming at the north pole or are able to have the Navy lend a nuclear sub and crew for a project. I do agree it helps to have knowledge of the Stargate saga, but that's the point of the film. Plus, this film didn't have a 100 million dollar budget, yet it was as first class as they could make it. Just as they did in the series.
2 people found this helpful

Marcio Luis TeixeiraReviewed in the United States on September 20, 2019
5.0 out of 5 stars
A Perfect Series Finale
Verified purchase
I saw "Stargate: Continuum" after having watched all 214 episodes of SG-1 and "Stargate: Arc of Truth" during the course of a few months. By the time I reached "Stargate: Arc of Truth", I had been suffering from Ori fatigue and that movie felt like too much of the same. "Stargate: Continuum," however, blew me away! It was a whole new story with the welcome reappearance of my favorite characters from all the previous seasons. Both "Stargate: Continuum" and the final episode of the series ("Unending") stand out to me as two fantastic and imaginative endings to an outstanding show! Onwards to Stargate Atlantis!
3 people found this helpful

MarivicReviewed in the United States on January 23, 2019
5.0 out of 5 stars
It's pretty good. But i want O'Neill and Carter to finally get together!
Verified purchase
I grew up watching Stargate. From the movie to the series. I love the original characters. They have wonderful chemistry. I own the TV Series DVD Boxsets. All of them. (^o^)v. I love rewatching these series. I just wish that General O'Neill and Kernel Carter get married and have their own family! That's the only thing I wish they did before canceling this series. I need closure for both of them!!! Well, I still love the show and I know will be re-watching it over and over again.
7 people found this helpful

SamReviewed in the United States on July 15, 2020
4.0 out of 5 stars
Worth seeing if you are a fan
Verified purchase
First, I’m a huge SG-1 fan and I must say this is a made for tv kinda film, but it hits the mark pretty well. It’s not anything like a real feature film and feels more like a 2 hour episode but they did it well and wrote a great story. The only reason I wouldn’t give it five stars is because I wish they had treated it more like a feature film and created a more stand alone story, better special effects, and of course show the audience more things they wouldn’t normally see in a 1 hour network tv show. Otherwise if you are even just familiar with SG-1 then this is a must see.
See all reviews
Back to top
Get to Know Us
Make Money with Us
Amazon Payment Products
Let Us Help You
EnglishChoose a language for shopping. United StatesChoose a country/region for shopping.
© 1996-2021, Amazon.com, Inc. or its affiliates