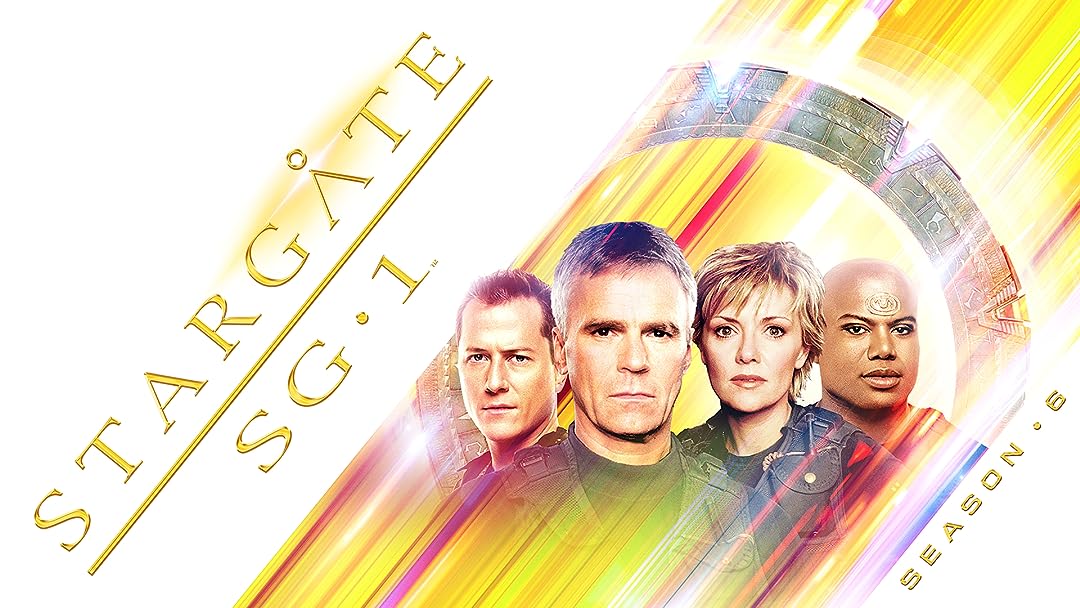 (28)2003X-Ray13+
Stargate SG-1 picks up where the blockbuster film left off. Colonel Jack O'Neill and his SG-1 team; Daniel Jackson, Teal'c, and Captain Samantha Carter, set out to explore the mysteries of the Stargate. Each exciting mission through the gate takes the SG-1 team to new worlds in a seemingly boundless universe.

Philip JonesReviewed in the United States on June 4, 2013
5.0 out of 5 stars
The way it was meant to be seen.
Verified purchase
I bought this VHS because it is the only version that was originally broadcast on Showtime. The DVD, special edition included is syndicated TV edit. I know the series evolved beyond the outright sexuality of the first season, but why is not a DVD version of this. I have not seen the Blue-ray version; so, I can not speak for it. If you wondering what I am referring to, look no further than what network it was on. There was full frontal female nudity in it. If you want to see the syndicated version, it is still airing or you can download it. If you want the broadcast version, buy this VHS. Good luck finding a VCR. Hopefully mine will last longer than my parent's microwave of 35 years.
10 people found this helpful

NickDickReviewed in the United States on March 29, 2013
5.0 out of 5 stars
Best Damn Sci-Fi seies, hands down, bar none
Verified purchase
I have seen the movie, and the series only provides an increase in the depth of the characters that began in the movie. These two episodes provide an excellent bridge and stepping off point for the series to begin.
8 people found this helpful

AnthonyReviewed in the United States on January 26, 2016
1.0 out of 5 stars
If you want the original edit this is not it
Verified purchase
Not the original cut version. Just another edit.
6 people found this helpful

Pam LivelyReviewed in the United States on November 17, 2014
5.0 out of 5 stars
Five Stars
Verified purchase
Love this series!!!
One person found this helpful

Amazon CustomerReviewed in the United States on July 17, 2019
5.0 out of 5 stars
Our agreements with the content provider don’t allow purchases of this title at this time
One of my favorite shows on television. I consider it right up there with Star Trek.... the only issue is, I can't finish watching the show!!!! What happened? Why can I no longer watch it? Did a contract end or something? This is super disappointing!
15 people found this helpful

Michael HamoriReviewed in the United States on December 18, 2018
5.0 out of 5 stars
This show is amazing. Like, it's just amazing.
I have loved this show since I was a child. I used to feel like Samantha Carter was my role model. Now I'm twenty five years old and I still love this show. I think in the film universe, I'm in love with Dr. Gregory House, from House, M.D., Jesse Pinkman, from Breaking Bad, and Dr. Daniel Jackson, from Stargate SG-1. Maybe Ricky Fitts. Can you maybe-love something? Although Jackson sometimes annoys me -- like how he sometimes fails to consider the possibility that he is wrong on certain topics because of the arrogance of his intelligence when I believe that truly smart people (myself included) ought to be critical and challenge themselves as well as everything else... it's sort of like total integration of aptitude in a high functioning active capacity. I used to hate that in the X-Files movie as well, how the so called "scientist," a lover of science, kept saying things were "impossible," rather than just accepting that she couldn't yet explain them. If it happened, it is possible. Something is possible. Yeah, I get the residual skepticism when something seems outrageous, but you should immediately begin by tackling how it happened, not how it couldn't have happened. But I digress... oh my gosh, this review is going to be terribly written.

I LOVE this show so much. There's even an episode where top secret government information gets leaked to a TV show and the TV show is not shut down because it is decided that if the information should ever be leaked again, they could cite the show as an explanation to cover their tracks. Hm.... hmm...

Ah, I'm only partially joking. That is a real episode. I like how my flavor of a "joke" doesn't even require a punchline in this case, it just is. Also, I love all of the throw backs and allusions in this show that I didn't necessary catch as a child. I understood the show then, but I didn't fully appreciate the importance in the referencing of ancient Sumerian, which my grandfather speaks and has written books about. Now I have all the more reason to nerd out on this program. There are also all kinds of references and parallels with conspiracy theories and true history alike. Being less seasoned as a youth, I didn't catch much of this which I now can.

I just LOVE when you love something as a kid and have specific reasons for loving it, like the attraction is not random, but then you grow up to love it even more and there are so many package deals in this life and just...

bobby reichReviewed in the United States on December 9, 2018
1.0 out of 5 stars
Season 7 'episode 1 and 3 are switched
on season 7 you have episode 1 and 3 switched. You need to fix it as it screws up the story very badly
4 people found this helpful
See all reviews
Back to top
Get to Know Us
Make Money with Us
Amazon Payment Products
Let Us Help You
EnglishChoose a language for shopping. United StatesChoose a country/region for shopping.
© 1996-2021, Amazon.com, Inc. or its affiliates